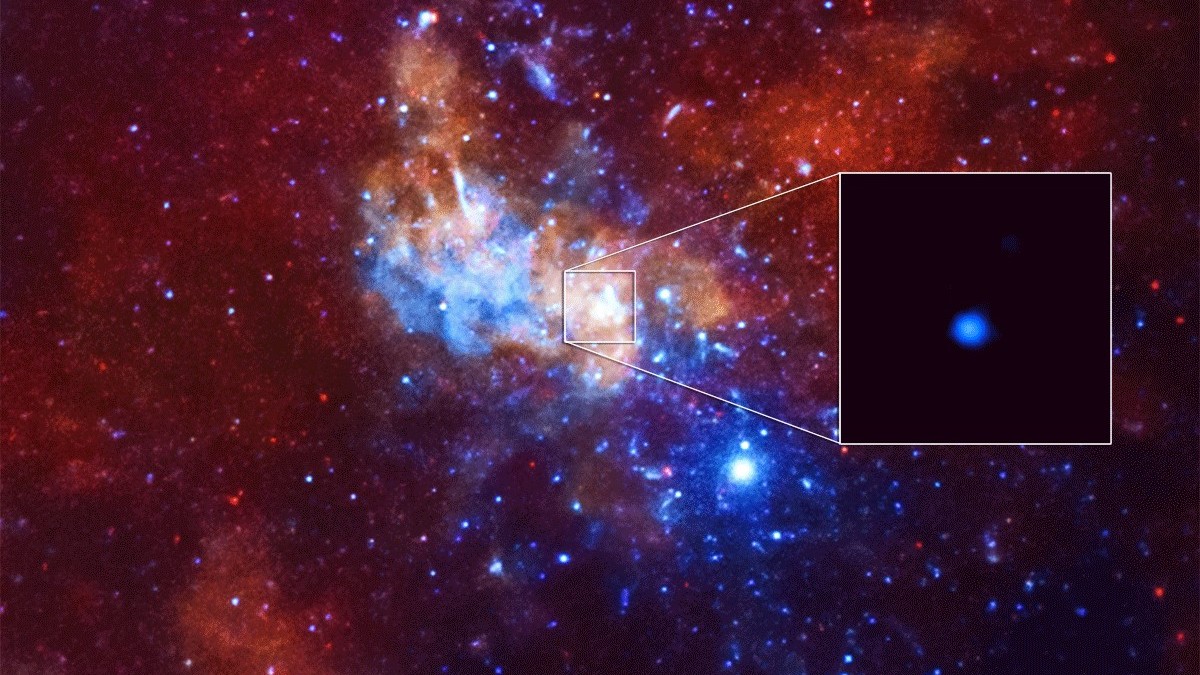 An x-ray flare seen from the supermassive black hole at the center of the Milky Way galaxy, Sagittarius A*.

In the direction of the constellation of Sagittarius, in the center of the Milky Way Galaxy, sits a supermassive black hole. Called Sagittarius A*, this black hole is about 4 million times larger than the Sun. The 2020 Nobel Prize in Physics was awarded for studies of this black hole, and how it relates to Einstein’s Theory of General Relativity. When the Next Generation Very Large Array (ngVLA) comes online, it will test Einstein’s theory of black holes even further, and it will do so using cosmic clocks.

General Relativity has been extremely well tested in the Solar System and found to pass all of its tests with flying colors. However, gravity is “weak” in the Solar System, because, astronomically speaking, the Sun does not have a large mass. In comparison to the Solar System, the supermassive black hole at the center of the Milky Way Galaxy presents a much “stronger” test of relativity.

Nature presents astronomers with a special kind of star known as pulsars, which are ideal for testing Einstein’s General Relativity. Pulsars are incredibly small and dense dead stars—a teaspoon scooped out of a pulsar would weigh about 1 trillion tons. They form when stars about 10 times larger than the Sun die and collapse, eventually ending up being squeezed into a region about the size of Washington, D.C. Much like a figure skater spins faster when she pulls in her arms, a pulsar can spin more than once per second. Because of their collapse, pulsars also have magnetic fields that are trillions of times stronger than that of the Earth, leading them to generate intense beams of radio waves. If a pulsar’s radio beam passes across the Earth, astronomers receive a radio pulse, essentially like a “radio lighthouse.” With their regular pulses, pulsars can serve as cosmic clocks, and astronomers can measure their “ticks” and “tocks” with tremendous precision. Indeed, the 1993 Nobel Prize in Physics was awarded for the discovery of two neutron stars in orbit about each other, which were subsequently “timed” to be spiraling together, in agreement with another prediction of General Relativity.

A classic test of General Relativity was to compare how well two clocks kept time, with one clock on the ground and another clock carried in an airplane. As predicted by General Relativity, the clock on the ground ran slow (“ticked” slightly slower) compared to the clock on the airplane, because gravity affects time (an effect called “time dilation”). Because the Earth’s gravity is “weak,” this effect is small. For instance, after spending a year on the International Space Station, an astronaut returns 0.01 seconds younger than those of us who remained on the Earth. However, this effect, while small, is crucial to our everyday lives—without taking this effect into account, the Global Positioning System (GPS) would not work.

Because the Earth’s gravity is weak, it is difficult to test the extremes of General Relativity, to understand if and how it no longer works. However, if clocks were orbiting near Sagittarius A*, the black hole in the center of the Milky Way, its much larger mass would mean that these clocks would run much slower, and much more powerful tests of General Relativity could be conducted. Pulsars could serve as these clocks.

Here’s where the next-generation Very Large Array (ngVLA) becomes important. Pulsars are generally faint, and Sagittarius A* is about 25,000 light-years away. While astronomers have hunted for pulsars near Sagittarius A*, none have been found. One likely explanation is that current radio telescopes are not yet sensitive enough to capture the weak radio pulses. With its much higher sensitivity, as compared to current radio telescopes, the ngVLA should be able to find pulsar clocks orbiting near Sagittarius A*, and then be able to use their radio pulses to provide the next generation of tests of General Relativity.