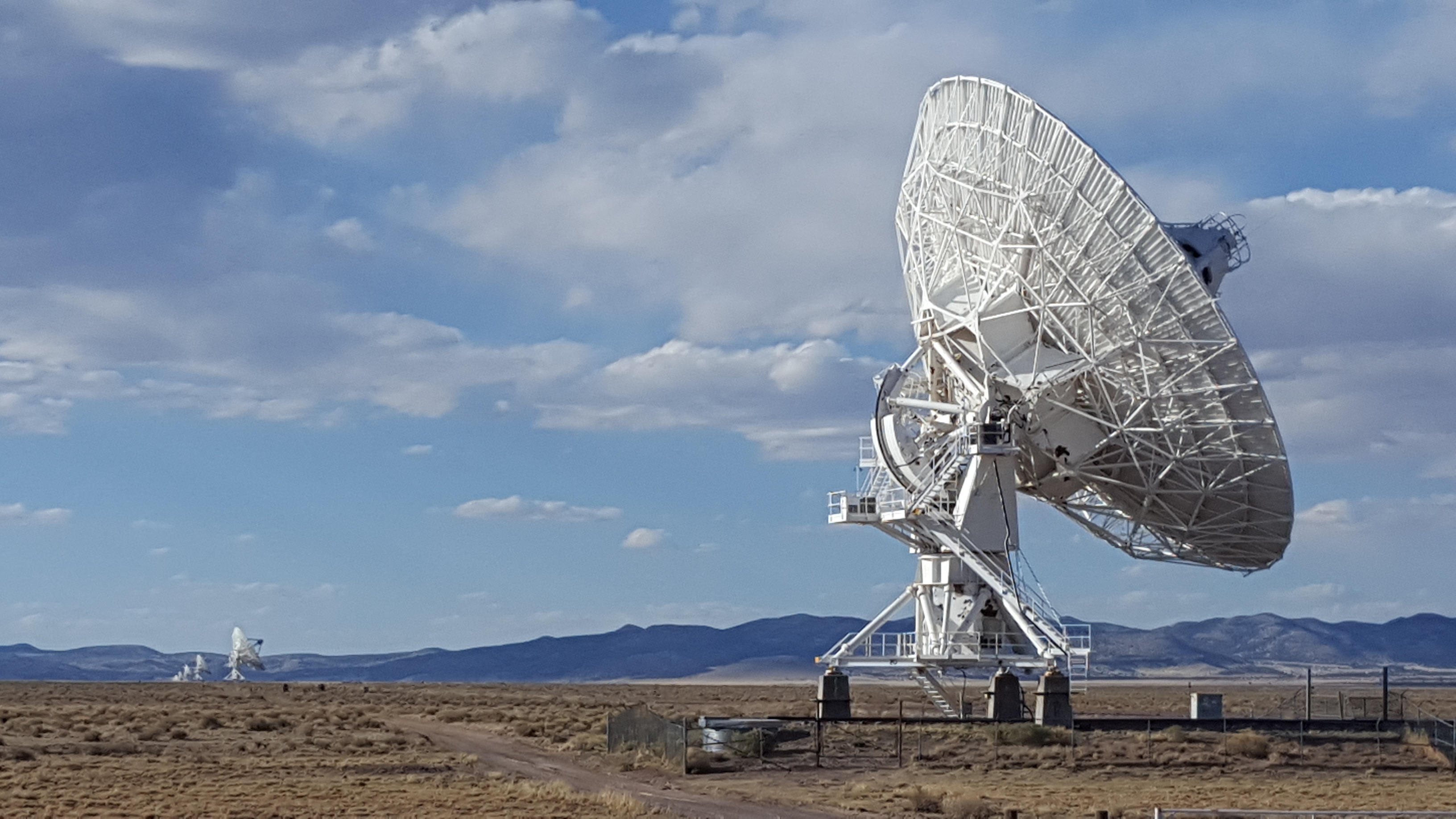 My two-year-old loves radio telescopes. My friends are convinced that I trained my son Günther to point to and squeal in excitement at pictures of large antennas opened toward the cosmos, but I’ve only encouraged this behavior through my own glee at seeing a radio telescope. Even at two, he recognizes that there is something beautiful about the sight of these large white metal instruments.

Most mornings, Günther points at the fabric conference poster hanging from my bedroom wall, captivated by the image of the Atacama Large Millimeter/submillimeter Array (ALMA) at the bottom. He laughs excitedly when I wear my green apron from the Very Large Array (VLA) that has “All these dishes, where’s the dessert?” written across it, along with a slew of white radio antennas. He never fails to tug at my apron, carefully studying each and every dish. Günther’s favorite shirt is a blue one sporting a glow-in-the-dark rendering of the Green Bank Telescope (GBT).

I was seven the first time I saw a radio telescope, though I didn’t know it was a telescope at the time. I was in the back seat of my family’s car on my way to Cass Scenic Railroad in Pocahontas County, West Virginia. Along the way, we were greeted with an awe-inspiring sight: a valley of giant satellite-dish-things rising above the tree line. I remember my eyes growing wide as I hastily drew the dishes in my sketchbook, forever imprinting them in my mind.

The summer I graduated from high school, my family, intently curious about those dishes, was eager to find out exactly what they were. So, we took a trip down to Snowshoe, a mountain resort in the heart of the West Virginia wilderness, and to find the place I had sketched from the back of our car eleven years ago—what turned out to be one of the most powerful radio telescopes, not a crop of satellite dishes.

Stopping at the science center, I learned about radio astronomy as a way of “exploring the invisible universe” and that you didn’t have to be trained as an astronomer to be a part of the field. In my first taste of interdisciplinary science, I was amazed that the Green Bank telescopes unveiled the cosmos through collaborations among astronomers, physicists, engineers, computer scientists, chemists, and biologists. As I prepared to leave for college, I knew I wanted to major in science, but I was particularly intrigued by radio astronomy’s multidisciplinary approach to understanding the wider universe.

I went on to major in chemistry and mathematics, and yet I remained curious about radio astronomy. I liked to think about the time I spent at the GBT learning about the 17-million-pound telescope and how it collected faint signals from space with the same sensitivity of a cell phone taking a picture of a pepperoni on a pizza from six miles away. I had never taken an astronomy class, but I applied to work at the Green Bank Observatory as a summer student. In 2013, I was invited to return to Green Bank for a third time, this time as a research assistant.

My summer in Green Bank was transformative for me, waking up to see the GBT creeping over the trees every morning. I experienced interdisciplinary research firsthand, and while I was the only summer student whose major wasn’t astronomy, physics, or engineering, I felt like my perspective was no less important. For the first time, I understood why international relationships, a flagship value of my undergraduate institution, were so important as I talked with and shared meals with scientists from around the world. I also found a passion for outreach and, more specifically, public speaking, after giving a talk to about 30 high school students. I heard the term “astrochemistry”—the field in which I now do research as a doctoral candidate at Caltech—for the first time that summer.

I don’t know whether Günther’s love of radio telescopes will lead him into a career in the shadow of large dishes. Either way, I am ecstatic to have a small telescope enthusiast by my side, beaming and clapping excitedly when we see a radio telescope towering above the landscape, its gentle hum putting us at ease within the cosmos.