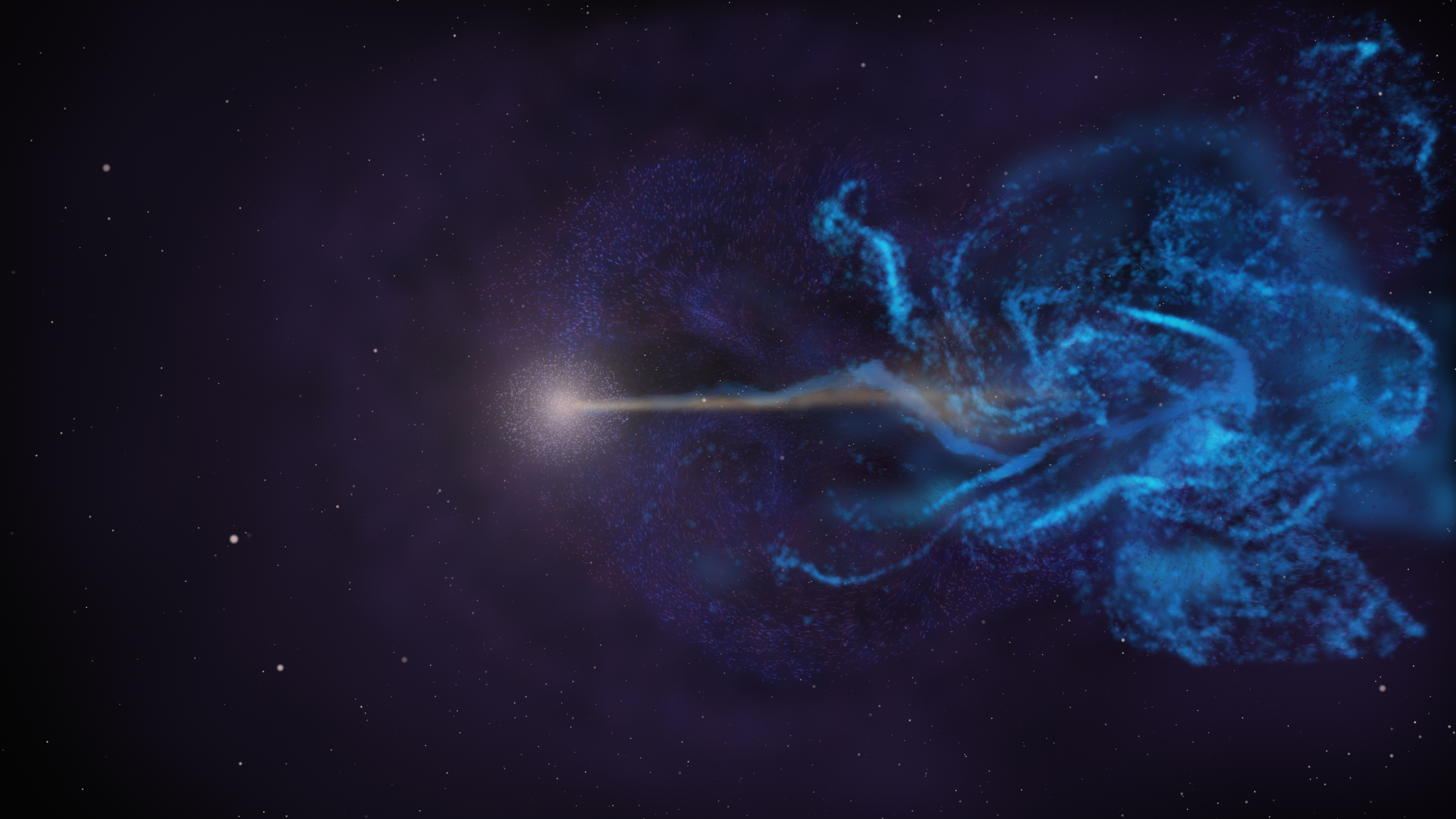 An artist's illustration of a distant galaxy with a central supermassive black hole that has launched a powerful radio jet (blue). The next-generation Very Large Array will allow astronomers to see and study radio jets in unprecedented detail, providing new insights into the intertwined formation and growth of supermassive black holes and the galaxies in which they reside. (NRAO/AUI/NSF)

Dr. Kristina Nyland was a postdoctoral research associate at the National Radio Astronomy Observatory from 2015 to 2018. She has over a decade of experience working with data from radio telescopes around the world and is excited about the possibility of using an instrument, like the next-generation Very Large Array (ngVLA), for her research. Before the AAS 233 meeting in Seattle, we asked her a few questions about her area of study–active galactic nuclei– and how the ngVLA will change the direction of her field.

What are Active Galactic Nuclei and AGN feedback? And how do you use AGN to study star formation and galaxy evolution?

As the most energetic, long-lived objects in the universe, AGN are able to dramatically alter their surroundings.  In particular, powerful radio jets are able to heat cold gas (raw star formation material) negating its ability to efficiently form new stars, or – in the most extreme cases – completely expel the gas out of the host galaxy.  The transfer of energy from an AGN into the surrounding interstellar or intergalactic gas is known as “AGN feedback.”  AGN feedback is believed to be an important process in shaping galactic stellar populations as galaxies form and grow over billions of years. However, many basic questions about how exactly AGN feedback works remain unanswered.  For instance, we don’t have a complete understanding of how AGN feedback impacts galaxy evolution as a function of key galaxy properties such as mass and distance.

How do you use the Karl Jansky Very Large Array (VLA) to study Active Galactic Nuclei?

The VLA in New Mexico is one of the premier observatories in the world for studying supermassive black holes and AGN physics.  The VLA has been used to conduct deep surveys to identify rapidly growing supermassive black holes in the early universe, as well as detailed, targeted observations of AGN feedback in action in nearby galaxies.  However, detecting the incredibly faint signatures of AGN feedback – such as rapid outflows of gas driven by AGN accretion disk winds or powerful radio jets – is observationally expensive even with a world-class telescope like the VLA.  As a result, we have only been able to perform detailed studies of feedback associated with AGN that are relatively nearby and/or unusually powerful and rare, such as those with radio jets that extend far beyond their host galaxies into intergalactic space.

The combination of VLA observations with data from the Atacama Large Millimeter/Submillimeter Array (ALMA) in Chile, which has been ramping up to full operations over the past several years since its inception, has led to some exciting new advancements in our understanding of AGN feedback.  In particular, the higher frequency range of operation of ALMA compared to the VLA has allowed it to study the chemical signatures of AGN feedback for the first time. However, with a collecting area of about half that of the VLA, the sensitivity of ALMA still makes observations of AGN feedback challenging, particularly for distant galaxies at high redshift, when the universe was only a fraction of its current age.

How will an instrument like the ngVLA change the scope of your research? How will the ngvla revolutionize your understanding of AGN?

The next-generation Very Large Array (ngVLA), a prospective new radio telescope for the 2030’s that is currently under development by NRAO, would offer many exciting new advancements in our understanding of galaxy formation and evolution and the role of AGN feedback in shaping galaxy properties over cosmic time. With a ten-fold improvement in sensitivity compared to the VLA, as well as a 30X improvement in angular resolution, the ngVLA will enable large statistical studies of AGN feedback in action.  In particular, the ngVLA will be able to image the dominant population of AGN, which typically host radio jets with sub-galactic extents, over a large cosmic volume.

Since the ngVLA will also operate over a much wider range of frequencies (1 to 116 GHz) compared to the VLA (1 to 50 GHz), it will also be able to capture information from the carbon monoxide molecule, which has a bright transition around 115 GHz.  This molecule can be used to measure the content and conditions of a galaxy’s star-forming gas reservoir.  Thus, the ngVLA will be able to directly measure the effects of radio-jet-driven AGN feedback on galaxy evolution by comparing the radio jet and cold gas properties in galaxies over a wide variety of galaxy masses, distances, and environments.  The new information on the connection between galaxy evolution and AGN feedback provided by the ngVLA will be compared with large computer simulations, thereby offering us new and improved insights into AGN physics and – ultimately – our cosmic origins in the universe.