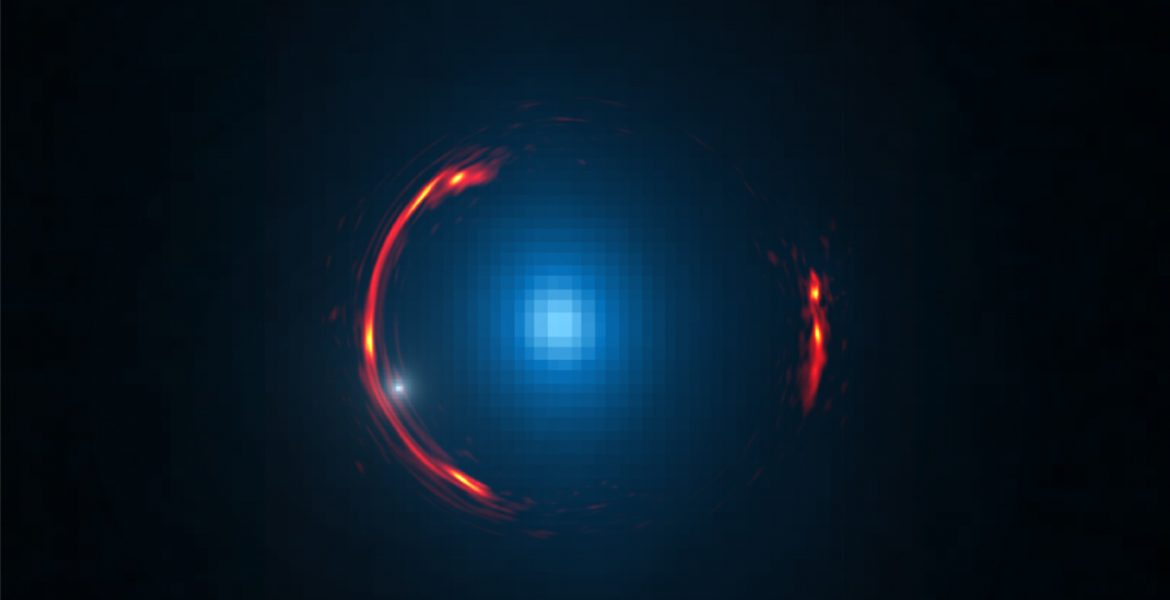 Credit: Y. Hezaveh, Stanford Univ.; ALMA (NRAO/ESO/NAOJ); NASA/ESA Hubble Space Telescope
Subtle distortions hidden in ALMA’s stunning image of the gravitational lens SDP.81 are telltale signs that a dwarf dark galaxy is lurking in the halo of a much larger galaxy nearly 4 billion light-years away. This discovery paves the way for ALMA to find many more such objects and could help astronomers address important questions on the nature of dark matter.

In 2014, as part of ALMA’s Long Baseline Campaign, astronomers studied a variety of astronomical objects to test the telescope’s new, high-resolution capabilities. One of these experimental images was that of an Einstein ring, which was produced by the gravity of a massive foreground galaxy bending the light emitted by another galaxy nearly 12 billion light-years away.

This phenomenon, called gravitational lensing, was predicted by Einstein’s general theory of relativity and it offers a powerful tool for studying galaxies that are otherwise too distant to observe. It also sheds light on the properties of the nearby lensing galaxy because of the way its gravity distorts and focuses light from more distant objects.

In a new paper accepted for publication in the Astrophysical Journal, astronomer Yashar Hezaveh at Stanford University in California and his team explain how detailed analysis of this widely publicized image uncovered signs of a hidden dwarf dark galaxy in the halo of the more nearby galaxy.

“We can find these invisible objects in the same way that you can see rain droplets on a window. You know they are there because they distort the image of the background objects,” explained Hezaveh. In the case of a rain drop, the image distortions are caused by refraction. In this image, similar distortions are generated by the gravitational influence of dark matter.

Current theories suggest that dark matter, which makes up about 80 percent of the mass of the Universe, is made of as-yet-unidentified particles that don’t interact with visible light or other forms of electromagnetic radiation. Dark matter does, however, have appreciable mass, so it can be identified by its gravitational influence.

For their analysis, the researchers harnessed thousands of computers working in parallel for many weeks, including the National Science Foundation’s most powerful supercomputer, Blue Waters, to search for subtle anomalies that had a consistent and measurable counterpart in each “band” of radio data. From these combined computations, the researchers were able to piece together an unprecedented understanding of the lensing galaxy’s halo, the diffuse and predominantly star-free region around the galaxy, and discovered a distinctive clump less than one-thousandth the mass of the Milky Way.

Because of its relationship to the larger galaxy, estimated mass, and lack of an optical counterpart, the astronomers believe this gravitational anomaly may be caused by an extremely faint, dark-matter dominated satellite of the lensing galaxy. According to theoretical predictions, most galaxies should be brimming with similar dwarf galaxies and other companion objects. Detecting them, however, has proven challenging. Even around our own Milky Way, astronomers can identify only 40 or so of the thousands of satellite objects that are predicted to be present.

“This discrepancy between observed satellites and predicted abundances has been a major problem in cosmology for nearly two decades, even called a ‘crisis’ by some researchers,” said Neal Dalal of the University of Illinois, a member of the team. “If these dwarf objects are dominated by dark matter, this could explain the discrepancy while offering new insights into the true nature of dark matter,” he added.

Computer models of the evolution of the Universe indicate that by measuring the “clumpiness” of dark matter, it’s possible to measure its temperature. So by counting the number of small dark matter clumps around distant galaxies, astronomers can infer the temperature of dark matter, which has an important bearing on the smoothness of our Universe.

“If these halo objects are simply not there,” notes co-author Daniel Marrone of the University of Arizona, “then our current dark matter model cannot be correct and we will have to modify what we think we understand about dark matter particles.”

This study suggests, however, that the majority of dwarf galaxies may simply not be seen because they’re mainly composed of invisible dark matter and emit little if any light. “Our current measurements agree with the predictions of cold dark matter,” said team member Gilbert Holder of McGill University in Montreal, Canada. “In order to increase our confidence we will need to look at many more lenses.”

“This is an amazing demonstration of the power of ALMA,” said Hezaveh. “We are now confident that ALMA can efficiently discover these dwarf galaxies. Our next step is to look for more of them and to have a census of their abundance to figure out if there is any possibility of a warm temperature for dark matter particles.” 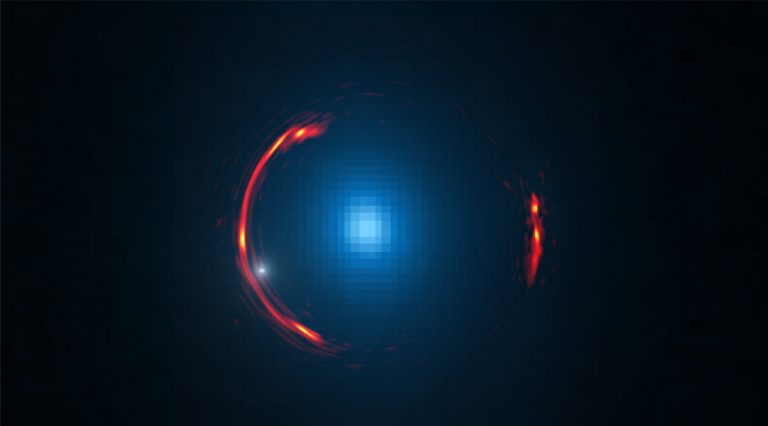 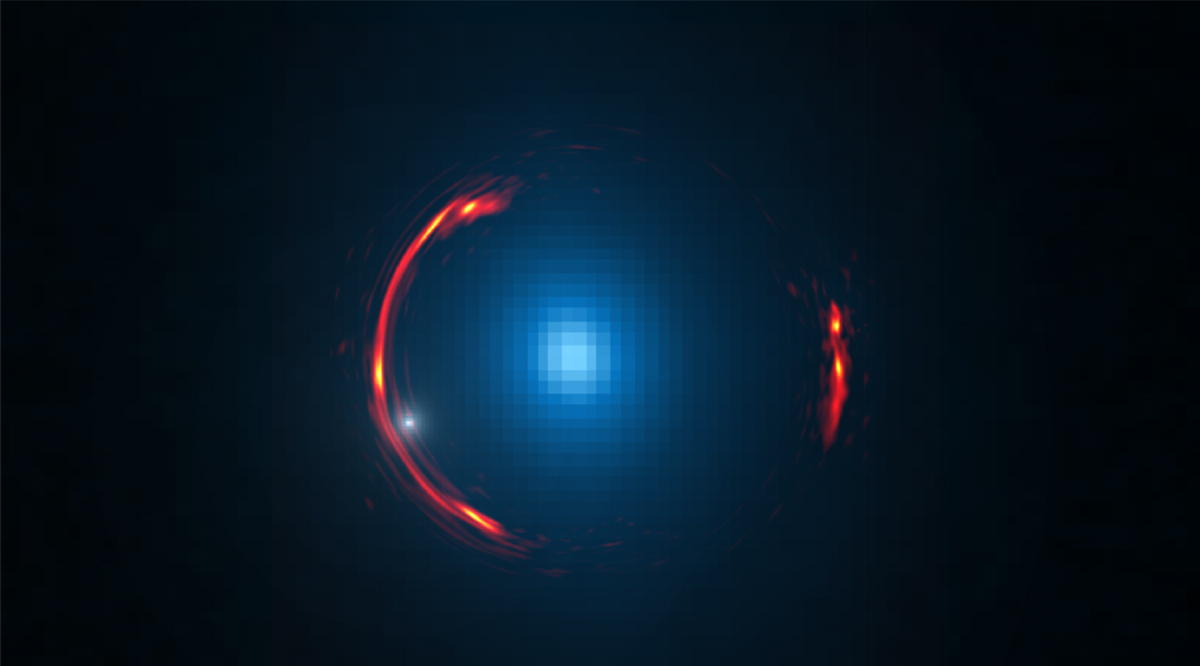