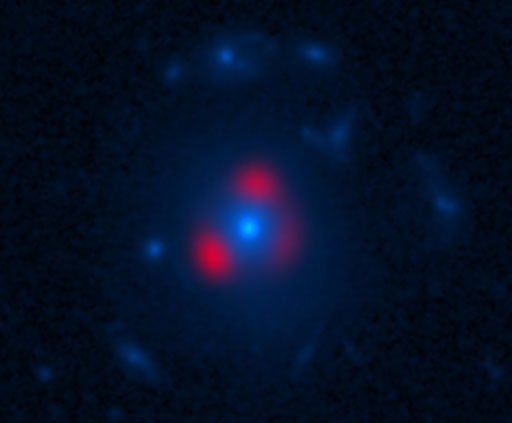 Astronomers using the Atacama Large Millimeter/submillimeter Array (ALMA) telescope have discovered starburst galaxies earlier in the Universe’s history than they were previously thought to have existed. These newly discovered galaxies represent what today’s most massive galaxies looked like in their energetic, star-forming youth. The research is the most recent example of the discoveries coming from the new international ALMA observatory, which celebrates its inauguration today.

The results, published in a set of papers to appear in the journal Nature and in the Astrophysical Journal, will help astronomers better understand when and how the earliest massive galaxies formed.

The most intense bursts of star birth are thought to have occurred in the early Universe in massive, bright galaxies. These starburst galaxies converted vast reservoirs of gas and dust into new stars at a furious pace – many thousands of times faster than stately spiral galaxies like our own Milky Way.

The international team of researchers first discovered these distant starburst galaxies with the National Science Foundation’s 10-meter South Pole Telescope. Though dim in visible light, they were glowing brightly in millimeter wavelength light, a portion of the electromagnetic spectrum that the new ALMA telescope was designed to explore.

Using only 16 of ALMA’s eventual full complement of 66 antennas, the researchers were able to precisely determine the distance to 18 of these galaxies, revealing that they were among the most distant starburst galaxies ever detected, seen when the Universe was only one to three billion years old. These results were surprising because very few similar galaxies had previously been discovered at similar distances, and it wasn’t clear how galaxies that early in the history of the Universe could produce stars at such a prodigious rate.

“The more distant the galaxy, the further back in time one is looking, so by measuring their distances we can piece together a timeline of how vigorously the Universe was making new stars at different stages of its 13.7 billion-year history,” said Joaquin Vieira a postdoctoral scholar at Caltech who led the team and is lead author of the Nature paper.

In fact, two of these galaxies are the most distant starburst galaxies published to date — so distant that their light began its journey when the Universe was only one billion years old. Intriguingly, emission from water molecules was detected in one of these record-breakers, making it the most distant detection of water in the Universe published to date.

“ALMA’s sensitivity and wide wavelength range mean we could make our measurements in just a few minutes per galaxy — about one hundred times faster than before,” said Axel Weiss of the Max-Planck-Institute for Radioastronomy in Bonn, Germany, who led the work to measure the distances to the galaxies. “Previously, a measurement like this would be a laborious process of combining data from both visible-light and radio telescopes.”

The galaxies found in this study have relatives in the local Universe, but the intensity of star formation in these distant objects is unlike anything seen nearby. “Our most extreme galactic neighbors are not forming stars nearly as energetically as the galaxies we observed with ALMA,” said Vieira. “These are monstrous bursts of star formation.”

The new results indicate these galaxies are forming 1,000 stars per year, compared to just 1 per year for our Milky Way galaxy.

This unprecedented measurement was made possible by gravitational lensing, in which the light from a distant galaxy is distorted and magnified by the gravitational force of a nearer foreground galaxy. “These beautiful pictures from ALMA show the background galaxies warped into arcs of light known as Einstein rings, which encircle the foreground galaxies,” said Yashar Hezaveh of McGill University in Montreal, Canada, who led the study of the gravitational lensing. “The dark matter surrounding galaxies half-way across the Universe effectively provides us with cosmic telescopes that make the very distant galaxies appear bigger and brighter.”

“This is an amazing example of astronomers from around the world collaborating to make an exciting discovery with this new facility,” said Daniel Marrone with the University of Arizona, principal investigator of the ALMA gravitational lensing study. “This is just the beginning for ALMA and for the study of these starburst galaxies. Our next step is to study these objects in greater detail and figure out exactly how and why they are forming stars at such prodigious rates.”