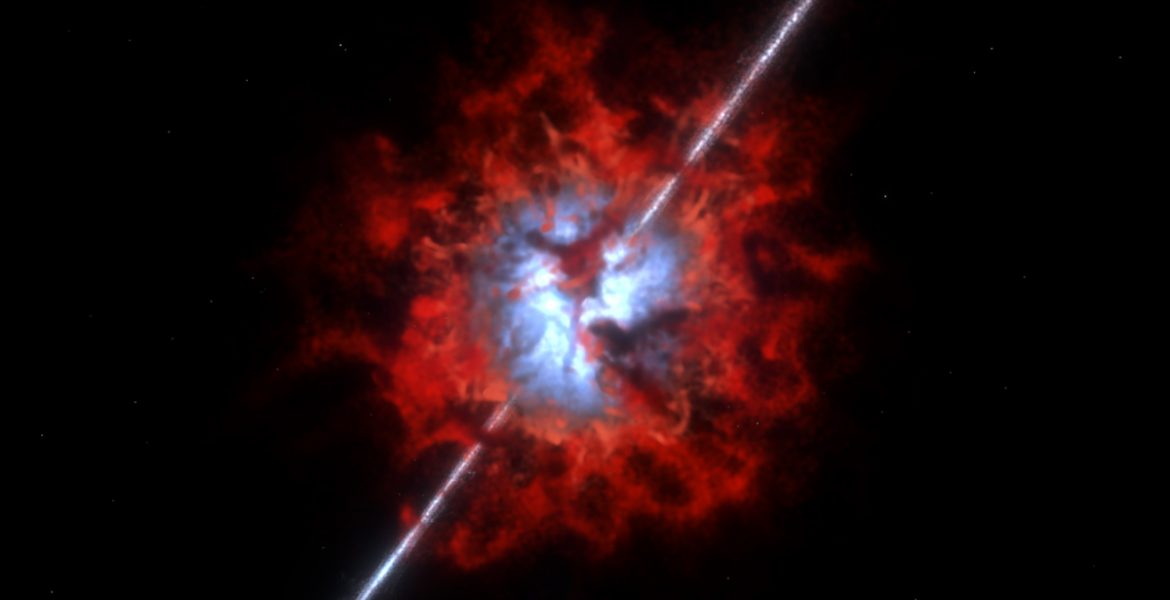 Using the Atacama Large Millimeter/submillimeter Array (ALMA), a team of researchers reports the first-ever detection of molecular gas — the fuel for star formation — in two galaxies that were previously rocked by gamma ray bursts (GRBs), the brightest explosions in the Universe. These new observations revealed that the molecular gas was concentrated toward the centers of the galaxies, while the GRBs occurred in unusual environments that were surprisingly bereft of gas yet rich in dust.

The researchers speculate that the dearth of molecular gas around the GRBs was due to strong ultraviolet (UV) radiation from young, massive stars, which can break apart the molecules of gas while leaving the dust relatively undisturbed.

Astronomer Bunyo Hatsukade, assistant professor at the Chile Observatory of the National Astronomical Observatory of Japan (NAOJ), led the research group that studied the GRB host galaxies. The results are published in the journal Nature.

ALMA’s unprecedented sensitivity made it possible to make the first detection ever of carbon monoxide (CO) gas in a GRB host galaxy. ALMA’s unparalleled high resolution also revealed GRB 020819B occurred in a galaxy where the molecular gas was concentrated at the nuclear region while dust was concentrated at the site of the GRB. The ratio of dust to molecular gas at the GRB site is ten or more times higher than in normal environments. It is the first time that the spatial distribution of molecular gas and dust in the GRB host galaxies is revealed.

Currently, GRBs are classified as either long- or short-duration. A long-duration GRB, which lasts two seconds or longer, is believed to be generated by the supernova explosion of a star 40 or more times the mass of our Sun. Short GRBs last less than two seconds and are associated with the collision and merger of neutron stars.

Previously, astronomers believed that massive stars that give rise to GRBs would reside in active star forming regions surrounded by a large amount of molecular gas. However, there had been no observation of molecular gas emission from any GRB host galaxy, which was a longstanding mystery.

“We have been searching for molecular gas in GRB host galaxies over 10 years since 2003 using various telescopes around the world such as Nobeyama Millimeter Array in Japan, Plateau de Bure Interferometer (PdBI) in France, and the ASTE Telescope in Chile,” said Kotaro Kohno, a professor at the University of Tokyo and a member of the research team. “As a result of our hard effort, we finally achieved a remarkable breakthrough using ALMA with unprecedentedly high sensitivity. We are very excited with what we have achieved.”

The sensitivity of ALMA was about five times better than the earlier observations, even though the ALMA observations were conducted in only 47 minutes as part of the early science campaign with just a fraction of the telescope’s eventual full complement of 66 antennas.

“We didn’t expect that GRBs would occur in such a dusty environment with such a low fraction of molecular gas. This indicates the GRB occurred in an unusual environment,” says Hatsukade.

The research team believes that the GRB sites were surrounded initially by a large quantity of molecular gas and dust, which fueled intense star formation.

“The results obtained this time were beyond our expectations. We need to carry out further observations with other GRB hosts to see if this could be general environmental conditions of a GRB site. We are looking forward to future research with the improved capability of ALMA,” says Hatsukade.

“Gamma ray bursts are among the most extreme and tantalizing objects in all of physics and astronomy,” said Kartik Sheth, an astronomer at the National Radio Astronomy Observatory in Charlottesville, Va. “These new observations offer an unprecedented view of the GRB environment and suggest important new avenues of research that are within ALMA’s grasp.” 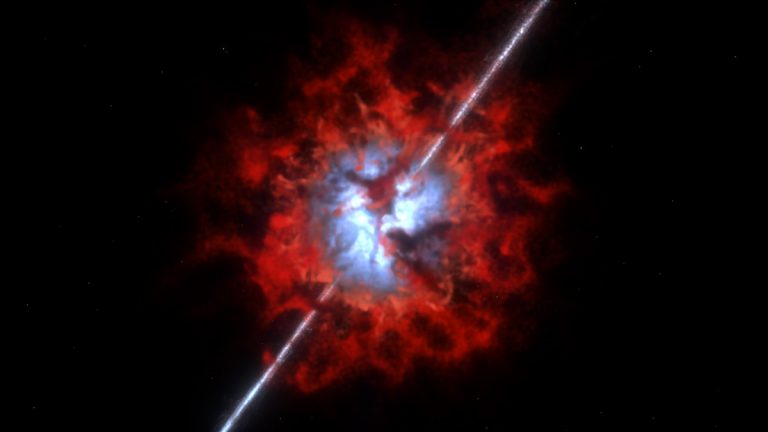 Close-in view of the artist’s conception of the environment around the gamma ray burst GRB...Read More
Credit: NAOJ 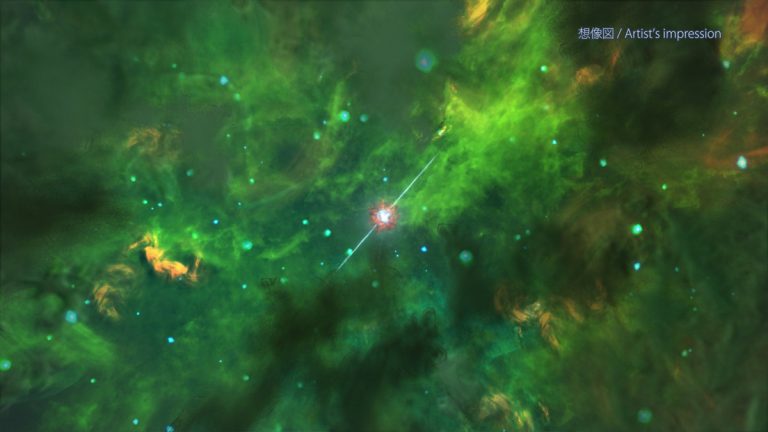 An artist’s conception of the environment around gamma ray burst GRB 020819B based on ALMA...Read More
Credit: NAOJ 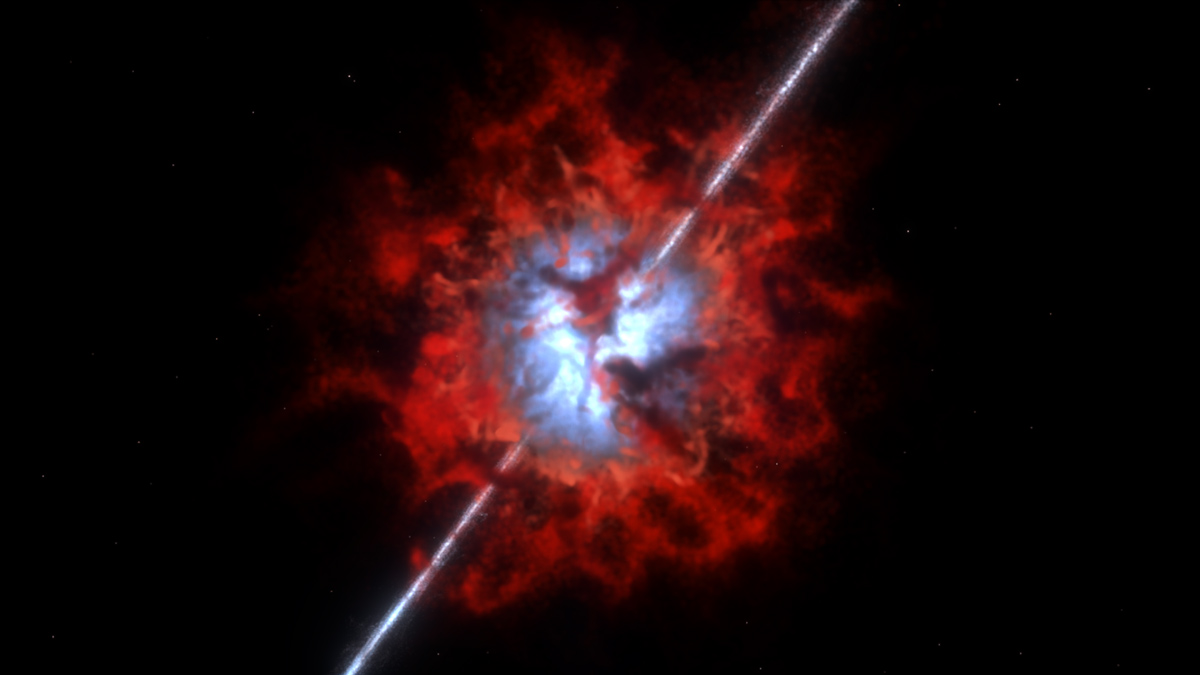 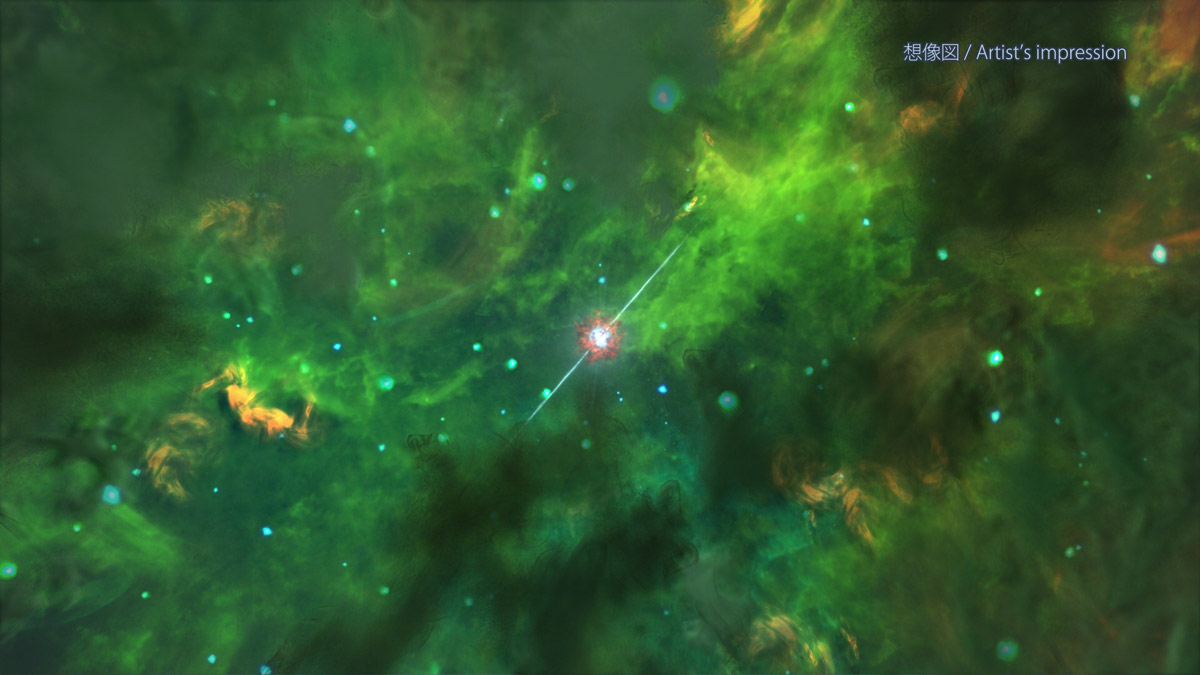