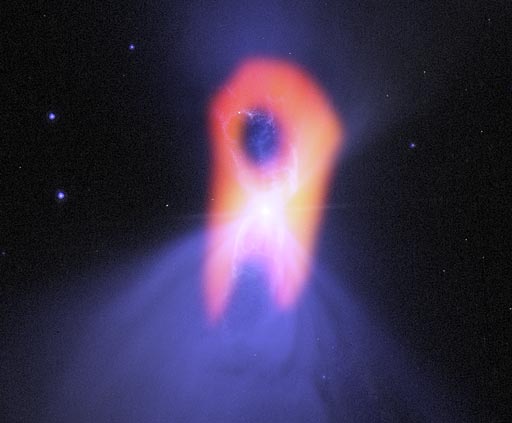 At a cosmologically crisp one degree Kelvin (minus 458 degrees Fahrenheit), the Boomerang Nebula is the coldest known object in the Universe – colder, in fact, than the faint afterglow of the Big Bang, which is the natural background temperature of space.

Astronomers using the Atacama Large Millimeter/submillimeter Array (ALMA) telescope have taken a new look at this intriguing object to learn more about its frigid properties and to determine its true shape, which has an eerily ghost-like appearance.

As originally observed with ground-based telescopes, this nebula appeared lopsided, which is how it got its name. Later observations with the Hubble Space Telescope revealed a bow-tie-like structure. The new ALMA data, however, reveal that the Hubble image tells only part of the story, and the twin lobes seen in that image may actually be a trick of the light as seen at visible wavelengths.

“This ultra-cold object is extremely intriguing and we’re learning much more about its true nature with ALMA,” said Raghvendra Sahai, a researcher and principal scientist at NASA’s Jet Propulsion Laboratory in Pasadena, California, and lead author of a paper published in the Astrophysical Journal. “What seemed like a double lobe, or ‘boomerang’ shape, from Earth-based optical telescopes, is actually a much broader structure that is expanding rapidly into space.”

The Boomerang Nebula, located about 5,000 light-years away in the constellation Centaurus, is a relatively young example of an object known as a planetary nebula. Planetary nebulae, contrary to their name, are actually the end-of-life phases of stars like our Sun that have sloughed off their outer layers. What remains at their centers are white dwarf stars, which emit intense ultraviolet radiation that causes the gas in the nebulae to glow and emit light in brilliant colors.

The Boomerang is a pre-planetary nebula, representing the stage in a star’s life immediately preceding the planetary nebula phase, when the central star is not yet hot enough to emit enough ultraviolet radiation to produce the characteristic glow. At this stage, the nebula is seen by starlight reflecting off its dust grains.

The outflow of gas from this particular star is expanding rapidly and cooling itself in the process. This is similar in principle to the way refrigerators use expanding gas to produce cold temperatures. The researchers were able to take the temperature of the gas in the nebula by seeing how it absorbed the cosmic microwave background radiation, which has a very uniform temperature of 2.8 degrees Kelvin (minus 455 degrees Fahrenheit).

“When astronomers looked at this object in 2003 with Hubble, they saw a very classic ‘hourglass’ shape,” commented Sahai. “Many planetary nebulae have this same double-lobe appearance, which is the result of streams of high-speed gas being jettisoned from the star. The jets then excavate holes in a surrounding cloud of gas that was ejected by the star even earlier in its lifetime as a red giant.”

Observations with single-dish millimeter wavelength telescopes, however, did not detect the narrow waist seen by Hubble. Instead, they found a more uniform and nearly spherical outflow of material.

ALMA’s unprecedented resolution allowed the researchers to reconcile this discrepancy. By observing the distribution of carbon monoxide molecules, which glow brightly at millimeter wavelengths, the astronomers were able to detect the double-lobe structure that is seen in the Hubble image, but only in the inner regions of the nebula. Further out, they actually observed a more elongated cloud of cold gas that is roughly round.

The researchers also discovered a dense lane of millimeter-sized dust grains surrounding the star, which explains why this outer cloud has an hourglass shape in visible light. The dust grains have created a mask that shades a portion of the central star and allows its light to leak out only in narrow but opposite directions into the cloud, giving it an hourglass appearance.

“This is important for the understanding of how stars die and become planetary nebulae,” said Sahai. “Using ALMA, we were quite literally and figuratively able to shed new light on the death throes of a Sun-like star.”

The new research also indicated that the outer fringes of the nebula are beginning to warm, even though they are still slightly colder than the cosmic microwave background. This warming may be due to the photoelectric effect — an effect first proposed by Einstein in which light is absorbed by solid material, which then re-emits electrons.