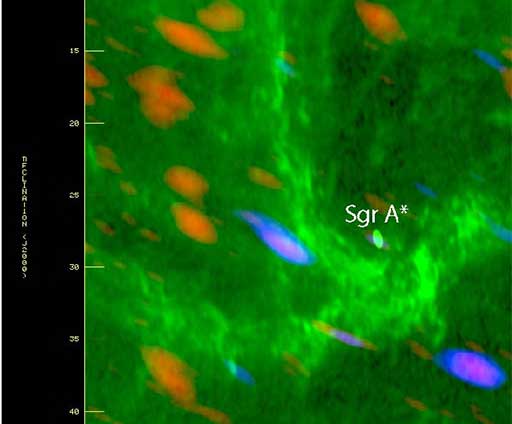 Astronomers using the Atacama Large Millimeter/submillimeter Array (ALMA) have discovered signs of star formation perilously close to the supermassive black hole at the center of the Milky Way Galaxy. If confirmed, this would be the first time that star formation was observed so close to the galactic center.

The center of our galaxy, 27,000 light-years away in the direction of the constellation Sagittarius, is home to a monstrous black hole with a mass of four million suns. Extending outward from this gravitational behemoth for many light-years is a turbulent region of space that is thought to be wracked by such extreme tidal forces that any star-forming clouds of dust and gas would be stretched thin and shredded long before infant stars could emerge.

Yet against these extreme odds, ALMA spotted telltale jets of material bursting out of what appear to be dense cocoons of gas and dust. These jets, if they were observed in more placid surroundings, would indicate the formation of a young star. The results were accepted for publication in the Astrophysical Journal Letters.

“People think it is very hard to form stars near a supermassive black hole,” said Farhad Yusef-Zadeh of Northwestern University. “This is because the gravity of the black hole produces extreme tidal forces that would stretch and elongate molecular clouds, preventing them from ever accumulating enough mass to trigger star formation. But what we seem to have found are patches of dust and gas that have become so dense that they are able to overcome their inhospitable surroundings.”

Yusef-Zadeh and his colleagues speculate that these molecular clouds have become so massive and dense, possibly by colliding together, that they cross the all-important threshold that allows internal gravity to take over, starting a chain of events that inexorably leads to the birth of a new star. As this process evolves, material in these clouds clumps together and collapses into an ever denser mass that begins to rotate faster and faster. This rapid rotation, possibly coupled with the star’s magnetic field, accelerates some of the material and shoots it out into space along the nascent star’s axis of rotation. The astronomers were able to detect these characteristic jets of material by tracing the presence of the molecule silicon monoxide (SiO), which is relatively abundant in molecular clouds. When excited during star formation, SiO emits a very specific set of wavelengths of light in the microwave, or millimeter range. This is precisely the window of light that ALMA was designed to study.

“SiO is an excellent tracer of molecular outflows,” said Yusef-Zadeh. “What we see in these images from ALMA are outflows that appear very much like what we see in star-forming regions elsewhere in galaxy. So the environments may be very different, but once you get the right conditions, collapse takes place and you’re able to create what we would observe to be run-of-the-mill massive or intermediate mass stars.”

For more than a decade, astronomers have puzzled over the origin of stars seen whipping around the black hole that lurks at the center of our galaxy. These massive, young stars (less than 10 million years old) are rocketing through an area of space where it was thought they had no business being. Astronomers believe that they either formed elsewhere under more placid conditions and migrated inward or they somehow overcame their turbulent childhoods to emerge as relatively normal and well-adjusted stellar objects. “Though this question of stars near the galactic center is still open ended, ALMA will definitely have the power and sensitivity to shed more light on the mystery,” said Al Wootten, the North America ALMA Project Scientist with the National Radio Astronomy Observatory (NRAO) in Charlottesville, Virginia. “These latest studies do suggest that the conditions necessary for star formation could extend much closer to the galactic center than we previously believed.”

These results were part of the ALMA Science Verification program. The data were taken with only 12 of ALMA’s eventual full complement of 66 antennas. Earlier data from CARMA, the Combined Array for Research in Millimeter-wave Astronomy, contributed to this research.