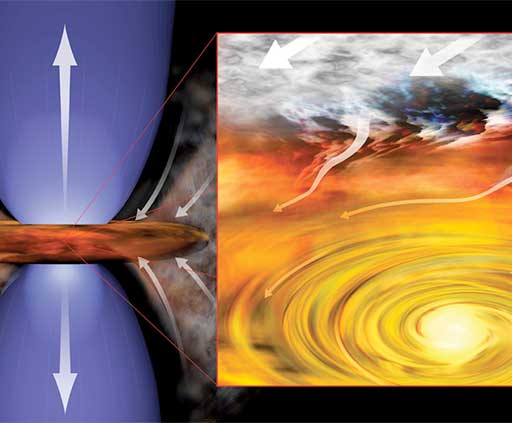 Astronomers have found the youngest still-forming solar system yet seen, an infant star surrounded by a swirling disk of dust and gas more than 450 light-years from Earth in the constellation Taurus.

The star currently has about one-fifth the mass of the Sun, but, the scientists say, will likely pull in material from its surroundings to eventually match the Sun’s mass. The disk surrounding the young star contains at least enough mass to make seven Jupiters, the largest planet in our Solar System.

“This very young object has all the elements of a solar system in the making,” said John Tobin, of the National Radio Astronomy Observatory. Tobin and his colleagues used the Submillimeter Array and the Combined Array for Millimeter-wave Astronomy to study the object, called L1527 IRS, residing in a stellar nursery called the Taurus Cloud.

The nascent solar system is no more than 300,000 years old, compared to the 4.6-billion-year age of our Sun and its planets. “It may be even younger, depending on how fast it accumulated mass in the past,” Tobin explained.

The young star is one of the closest examples of the earliest stage of star formation. The astronomers used the millimeter-wave observatories to detect both dust and carbon monoxide around the object. They were the first observers to conclusively show that the young star is surrounded by a rotating disk of material, and the first to be able to measure the mass of the protostar itself.

This pattern, called Keplerian rotation, “marks one of the first essential steps toward forming planets, because the disk is supported by its own rotation, will mediate the flow of material onto the protostar and allow the planet formation process to begin,” said Hsin-Fang Chiang of the University of Illinois and the Institute for Astronomy of the University of Hawaii.

“This is the youngest protostar found thus far to show that characteristic in a surrounding disk,” Tobin said. “In many ways, this system looks much like we think our own Solar System looked when it was very young,” he added. Previous observations from the Gemini Observatory suggested the presence of a large disk surrounding the protostar. This motivated Tobin and his team to pursue high-resolution millimeter-wave observations, confirming the presence of the disk and measuring its rotation.

The astronomers have received approval to improve their understanding of L1527 IRS by making high-precision observations with the Atacama Large Millimeter/submillimeter Array (ALMA), an international telescope system nearing completion at high elevation in northern Chile.

“ALMA’s advanced capabilities will allow us to study more such objects at greater distances,” Tobin said. “With ALMA, we will be able to learn more about how the disks form and how quickly the young stars grow to their full size, and gain a much better understanding of how stars and their planetary systems begin their lives,” he added.