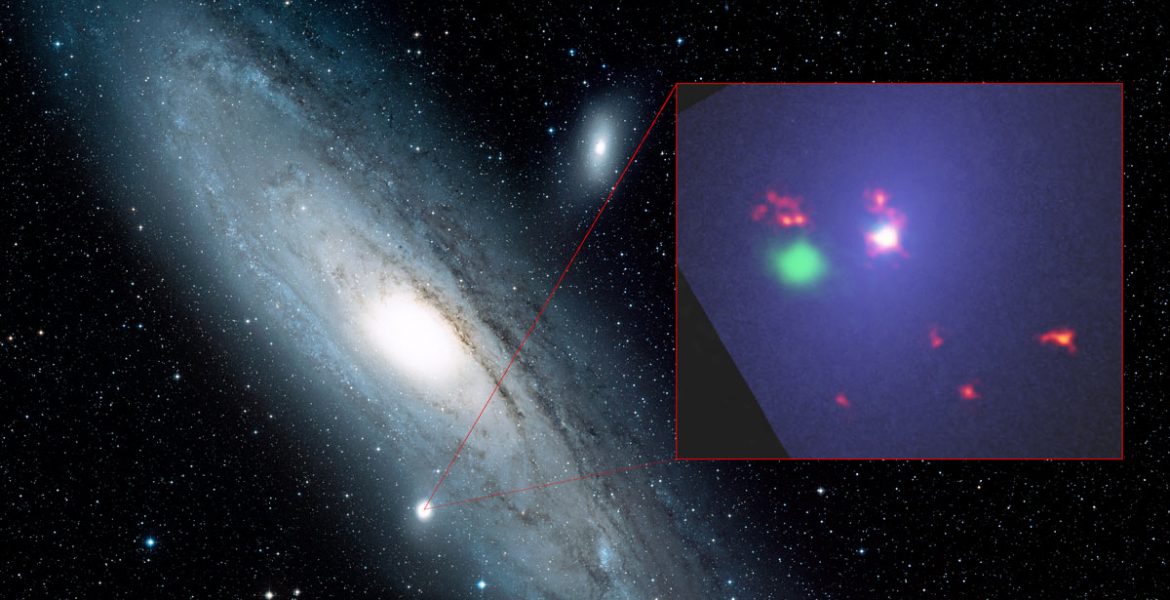 Thanks to the extraordinary sensitivity of the Karl G. Jansky Very Large Array (VLA), astronomers have detected what they believe is the long-sought radio emission coming from a supermassive black hole at the center of one of our closest neighboring galaxies. Evidence for the black hole’s existence previously came only from studies of stellar motions in the galaxy and from X-ray observations.

The galaxy, called Messier 32 (M32), is a satellite of the Andromeda Galaxy, our own Milky Way’s giant neighbor. Unlike the Milky Way and Andromeda, which are star-forming spiral galaxies, M32 is an elliptical galaxy, with little star formation. About 2.5 million light-years from Earth, M32 is much smaller than either the Milky Way or Andromeda.

Supermassive black holes are found at the cores of most galaxies, and as those black holes draw in matter from their surroundings, jets of material propelled to speeds close to that of light by the black holes often generate radio waves detectable with radio telescopes. The intensity of this radio emission depends on how voraciously the black hole is consuming surrounding matter. The central black holes of the Milky Way and Andromeda are quite weak radio emitters compared to many other galaxies.

“The very faint radio emission we think is coming from M32’s central black hole indicates that this object’s activity is among the weakest yet found, along with the Milky Way and Andromeda,” said Yang Yang, of Nanjing University in China. “Studying such quiescent black holes gives us an excellent opportunity to advance our presently-poor understanding of their physics,” she added.

The discovery was made possible by the dramatic improvement in sensitivity, or the ability to detect extremely faint radio waves, produced by a decade-long, $98 million upgrade of the VLA’s electronic systems that was completed in 2012. The new VLA observations were able to detect radio emission roughly 90 times fainter than previous studies of M32.

The VLA image showed a faint radio-emitting object at the location where X-rays are being emitted and around which stars near the galaxy’s center appear to be orbiting. “This tells us that the radio emission most likely is coming from the black hole, but we want to do further observations to confirm this,” Yang said.

M32’s black hole contains about 2.5 million times the mass of the Sun, compared to the Milky Way black hole’s 4 million.

The VLA also revealed three radio-emitting objects that, the scientists said, are planetary nebulae previously seen with visible-light telescopes. Planetary nebulae are spheres of gas blown off during late stages in the lives of stars like our Sun. The M32 VLA image represents the first detection by a radio telescope of such objects at the far edges of our Local Group of galaxies.

Yang led a research team of astronomers from China and the U.S. Lorant Sjouwerman of the National Radio Astronomy Observatory was instrumental in obtaining and reducing the VLA data for the study. The scientists are reporting their findings in the Astrophysical Journal Letters. 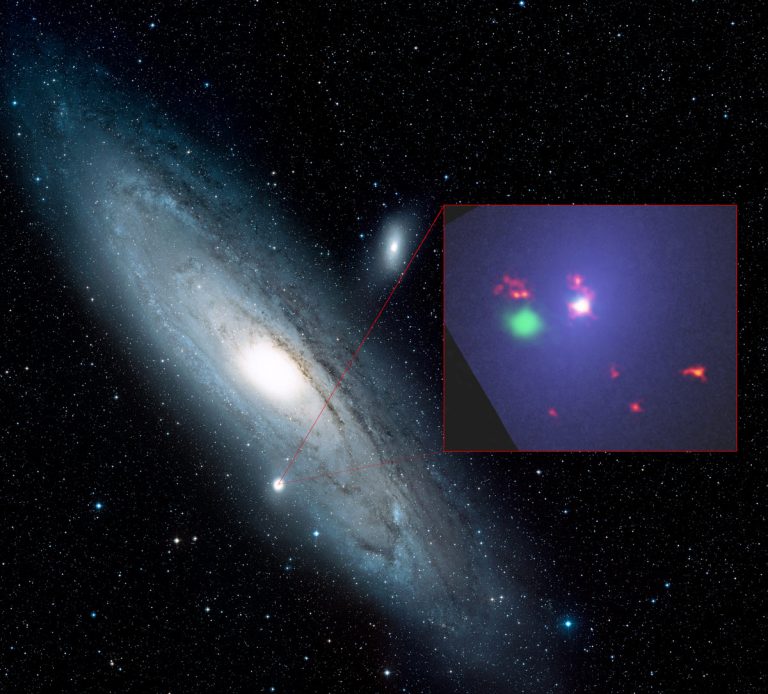 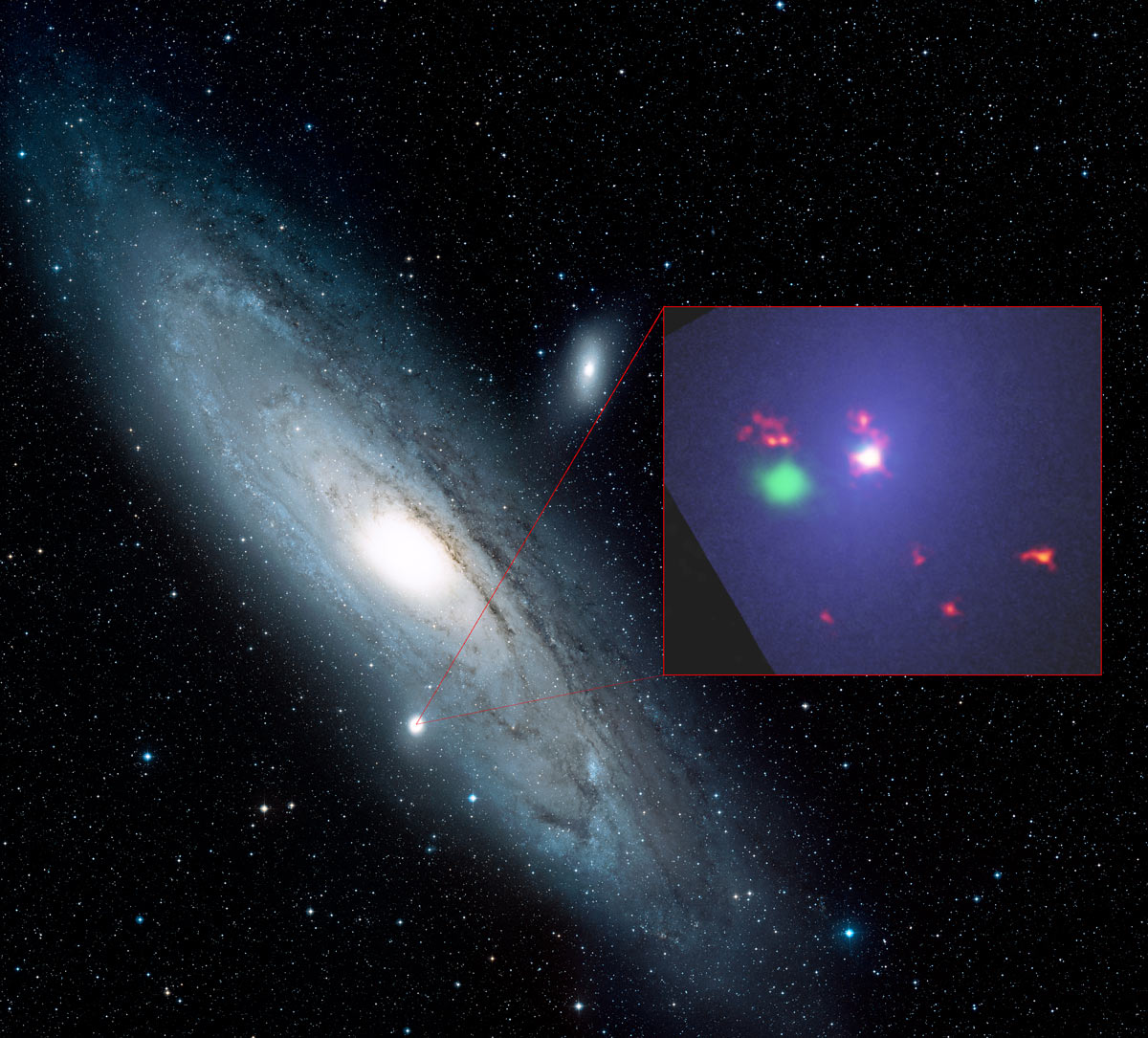