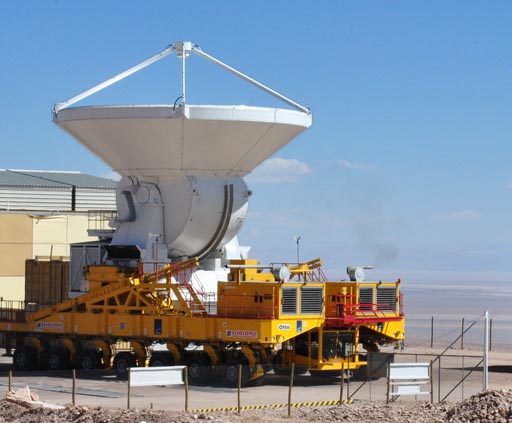 After more than a decade of planning and construction, the 66th and final antenna for the Atacama Large Millimeter/submillimeter Array (ALMA) telescope has been delivered to and accepted by the ALMA Observatory.

The delivery of the last of the antennas marks the beginning of a new era of discovery in astronomy.

“This is an important milestone in a project that has already expanded our understanding of the Universe,” said Phil Jewell, the North American ALMA Project Director. “Since the delivery of the first antenna in 2009, ALMA has enabled unprecedented research and made startling discoveries. The international scientific community eagerly awaits the new capabilities ALMA will provide now that it is reaching its full potential.”

North America and Europe each provided twenty-five 12-meter antennas, while East Asia delivered sixteen (four 12-meter and twelve 7-meter). By the end of 2013, all radio antennas are expected to be working together as one telescope, in an array that will span up to 16 kilometers (10 miles) across the Chajnantor plateau in the Atacama Desert of northern Chile. At an elevation of 5,000 meters (16,500 feet) above sea level, ALMA is the highest telescope array on Earth. This rugged area was carefully selected for its pristine views of the cosmos and arid environment. This is essential because the light that ALMA detects is easily absorbed by atmospheric moisture.

ALMA observes the Universe in millimeter and submillimeter wavelength light, the little-explored region of the electromagnetic spectrum between infrared light and radio waves. Light at these wavelengths comes from some of the coldest and most distant objects in the cosmos, such as clouds of gas and dust where new stars are being born as well as infant galaxies near the edge of the observable Universe.

The ALMA Observatory was inaugurated in March 2013. That event marked the completion of all the major systems of the giant telescope and the formal transition from a construction project to an operational observatory.

The final ALMA antenna rides an ALMA Transporter on its way from its assembly area...Read More
Credit: ALMA (ESO/NAOJ/NRAO)