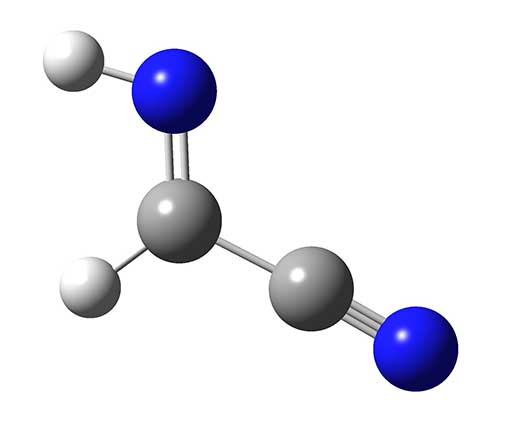 Using new technology at the telescope and in laboratories, researchers have discovered an important pair of prebiotic molecules in interstellar space. The discoveries indicate that some basic chemicals that are key steps on the way to life may have formed on dusty ice grains floating between the stars.

The scientists used the National Science Foundation’s Green Bank Telescope (GBT) in West Virginia to study a giant cloud of gas some 25,000 light-years from Earth, near the center of our Milky Way Galaxy. The chemicals they found in that cloud include a molecule thought to be a precursor to a key component of DNA and another that may have a role in the formation of the amino acid alanine.

One of the newly-discovered molecules, called cyanomethanimine, is one step in the process that chemists believe produces adenine, one of the four nucleobases that form the “rungs” in the ladder-like structure of DNA. The other molecule, called ethanamine, is thought to play a role in forming alanine, one of the twenty amino acids in the genetic code.

“Finding these molecules in an interstellar gas cloud means that important building blocks for DNA and amino acids can ‘seed’ newly-formed planets with the chemical precursors for life,” said Anthony Remijan, of the National Radio Astronomy Observatory (NRAO).

In each case, the newly-discovered interstellar molecules are intermediate stages in multi-step chemical processes leading to the final biological molecule. Details of the processes remain unclear, but the discoveries give new insight on where these processes occur.

Previously, scientists thought such processes took place in the very tenuous gas between the stars. The new discoveries, however, suggest that the chemical formation sequences for these molecules occurred not in gas, but on the surfaces of ice grains in interstellar space.

“We need to do further experiments to better understand how these reactions work, but it could be that some of the first key steps toward biological chemicals occurred on tiny ice grains,” Remijan said.

The discoveries were made possible by new technology that speeds the process of identifying the “fingerprints” of cosmic chemicals. Each molecule has a specific set of rotational states that it can assume. When it changes from one state to another, a specific amount of energy is either emitted or absorbed, often as radio waves at specific frequencies that can be observed with the GBT.

New laboratory techniques have allowed astrochemists to measure the characteristic patterns of such radio frequencies for specific molecules. Armed with that information, they then can match that pattern with the data received by the telescope. Laboratories at the University of Virginia and the Harvard-Smithsonian Center for Astrophysics measured radio emission from cyanomethanimine and ethanamine, and the frequency patterns from those molecules then were matched to publicly-available data produced by a survey done with the GBT from 2008 to 2011.

A team of undergraduate students participating in a special summer research program for minority students at the University of Virginia (U.Va.) conducted some of the experiments leading to the discovery of cyanomethanimine. The students worked under U.Va. professors Brooks Pate and Ed Murphy, and Remijan. The program, funded by the National Science Foundation, brought students from four universities for summer research experiences. They worked in Pate’s astrochemistry laboratory, as well as with the GBT data.

“This is a pretty special discovery and proves that early-career students can do remarkable research,” Pate said.

The researchers are reporting their findings in the Astrophysical Journal Letters.

Structure of cyanomethanimine.
Credit: NRAO/AUI/NSF
NRAO Astrochemist Tony Remijan and a team of undergraduates and graduate students discuss their discovery of a precursor to a pre-biotic molecule using the GBT.
Credit: Producer: Tania Burchell, Editing: Bill Saxton and Tania Burchell

ALMA has made the first-ever observations of a circumplanetary disk.