Skip to content
Topics in This Issue:
1. ALMA Finds that Organic Molecules are Branching Out

A new organic molecule with a “branched” structure was found by ALMA, offering greater hope that amino acids may one day be detected in interstellar space.

VLA mapped the structure of a disk of dust surrounding a young star, revealing a pair of gaps in the disk where new planets are likely forming.

New frequency synthesizer helps astronomers "tune in" to the cosmos.

1. ALMA Finds that Organic Molecules are Branching Out

Researchers using the Atacama Large Millimeter/submillimeter Array (ALMA) have teased out the faint signal of a new organic molecule lurking in interstellar space. The molecule, known as iso-propyl cyanide (i-C3H7CN), is a variant (isomer) of a molecule already known to be quite prevalent in space. The key difference between the two is that the carbon backbone upon which the newly detected molecule is “branched.” This distinction is very significant, according to the researchers, because it suggests that branched carbon-chain molecules may be fairly abundant in the interstellar medium. In this case, the “iso” version of the molecule is almost half as abundant as the normal form. “The enormous abundance of iso-propyl cyanide suggests that branched molecules may in fact be the rule, rather than the exception, in the interstellar medium,” says Robin Garrod, an astrochemist at Cornell University. Models of how these molecules form suggest they are produced either within or on thin veneers of ice that coat interstellar dust grains. Creating iso-propyl cyanide in such a way appears to require the addition of certain “functional” groups of carbon to the growing molecule. “This type of molecular manufacturing bodes well for the presence of amino acids — a precursor of proteins — in similar environments,” said Arnaud Belloche with the Max-Planck Institute for Radio Astronomy in Bonn, Germany. “A branched structure is a key characteristic of amino acids and among the amino acids found in meteorites, the most abundant isomers are the branched ones,” Belloche added. The results are published in the journal Science. 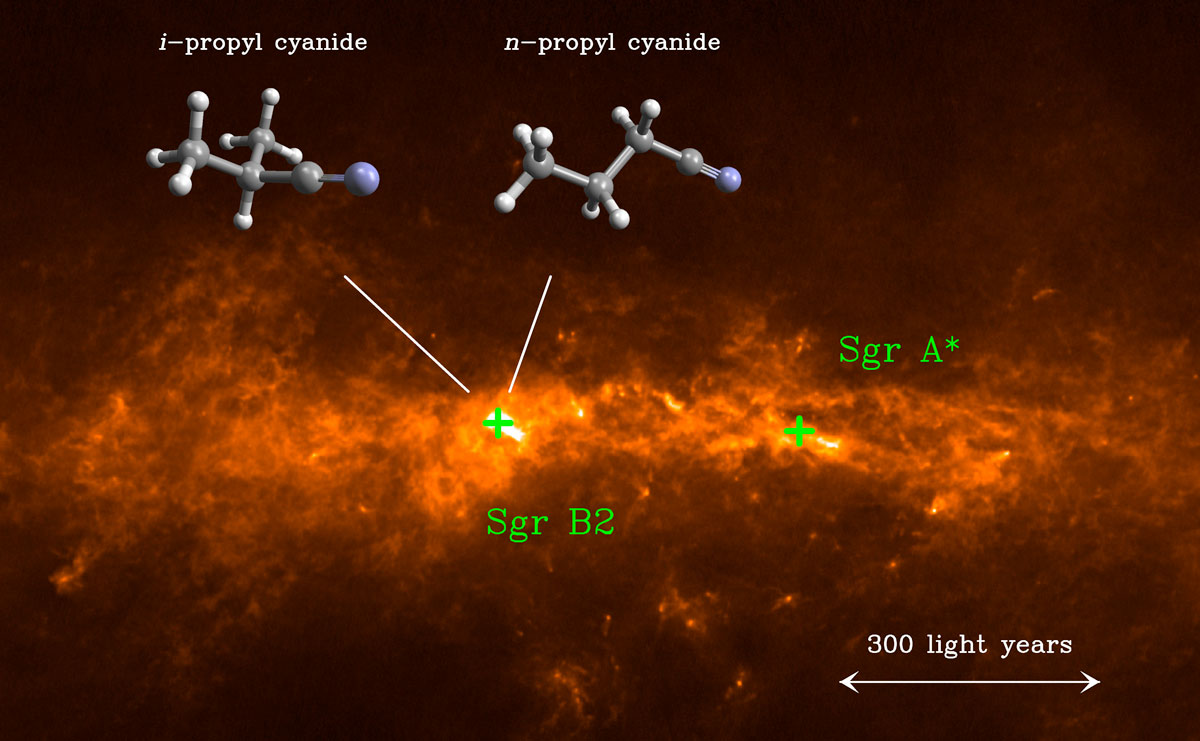 Dust and molecules in the central region of our Galaxy: The background image shows the dust emission in a combination of data obtained with the APEX telescope and the Planck space observatory at a wavelength around 860 micrometers. The organic molecule iso-propyl cyanide with a branched carbon backbone (i-C3H7CN, left) as well as its straight-chain isomer normal-propyl cyanide (n-C3H7CN, right) were both detected with the Atacama Large Millimeter/submillimeter Array in the star-forming region Sgr B2, about 300 light years away from the Galactic center Sgr A*.

Astronomers using the Karl G. Jansky Very Large Array (VLA) have mapped the structure of a disk of dust surrounding a young star, revealing a pair of gaps in the disk where new planets are likely forming. “We’re looking at the very early stages of planetary formation in this system,” said Mayra Osorio, of the Astrophysical Institute of Andalucía (IAA-CSIC) in Spain. The international team of scientists studied a young star designated HD 169142, nearly 500 light-years from Earth. They used the VLA to observe the star at radio frequencies of 42-48 GHz, or wavelengths of about 7 mm, a technique well-suited to detecting grains of dust surrounding the star. What they found was that the star is surrounded by a dusty disk with a radius about 240 times the Earth-Sun distance. The disk has two gaps — an inner gap ranging from just less than the Sun-Venus distance out to just under the Sun-Neptune distance, and another ranging from roughly the Sun-Pluto distance out to 67 times the Earth-Sun distance. “The dust in this system appears to have formed millimeter-to-centimeter-sized grains, which is a prerequisite for planet formation,” Osorio said. The gaps in the disk, the scientists said, are most likely caused by young planets sweeping up and accumulating the dust along their orbital paths. In fact, another team of astronomers, including Osorio and five others who did the radio observations, observed infrared light and announced finding a companion to the star within the inner gap. Osorio’s radio team has found an object within the outer gap that they suggest may be a dusty disk surrounding a second, still-forming planet. “This system is relatively nearby and its disk is seen nearly face-on from Earth, so it provides an excellent opportunity for further, detailed study of how planets form around young stars,” Osorio said. The scientists reported their findings in the Astrophysical Journal Letters. 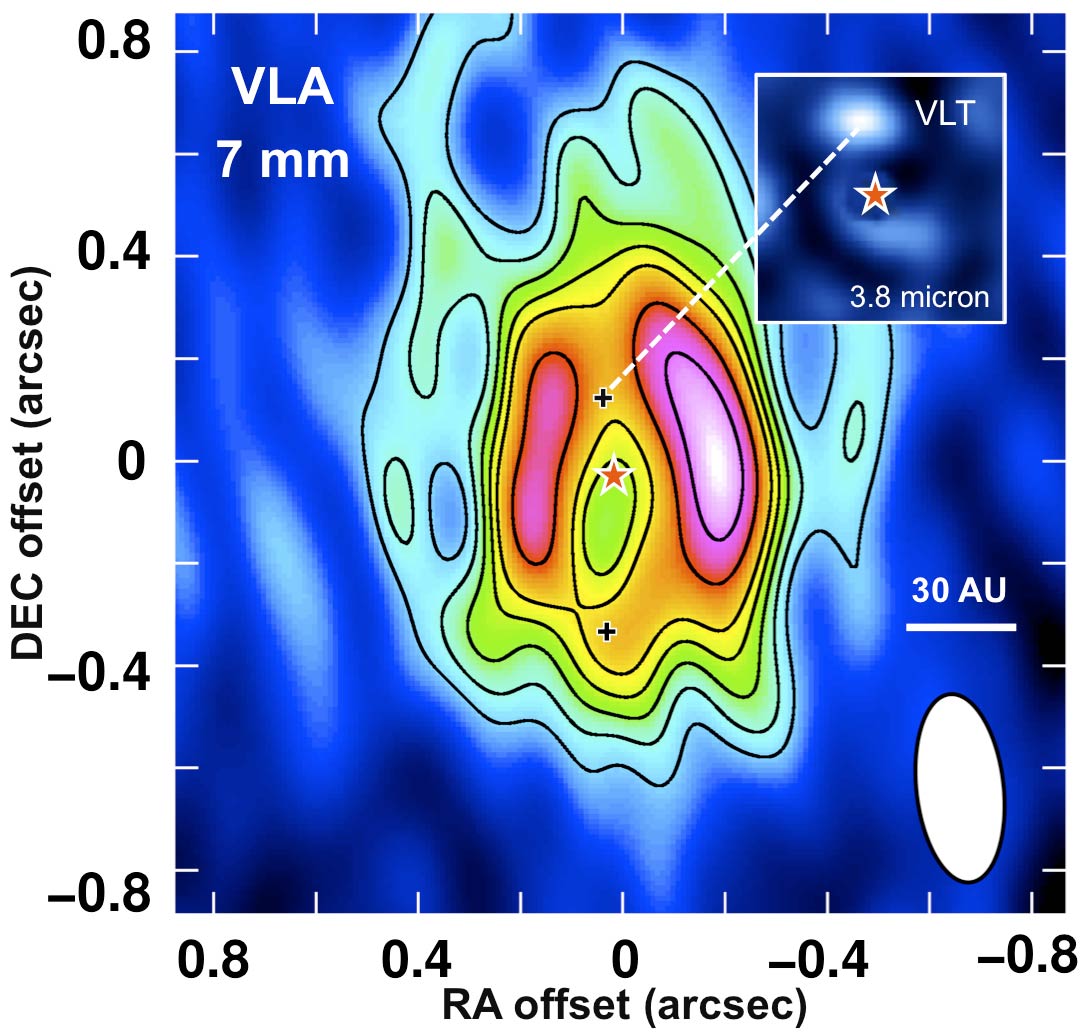 Image at 7 mm wavelength of the dusty disk around the star HD 169142 obtained with the Very Large Array (VLA) at 7 mm wavelength. The positions of the protoplanet candidates are marked with plus signs (+) (Osorio et al. 2014, ApJ, 791, L36). The insert in the upper right corner shows, at the same scale, the bright infrared source in the inner disk cavity, as observed with the Very Large Telescope (VLT) at 3.8 micron wavelength (Reggiani et al. 2014, ApJ, 792, L23).

A team of NRAO engineers and scientists has been granted a patent (#8,779,814)  for a new class of frequency synthesizer – a device that is integrated into radio telescopes to help astronomers tune-in to very specific, but very weak signals from space. Before astronomers can study and analyze faint celestial signals, they first must choose the signals of interest; a frequency synthesizer does just that while mitigating the unwanted signals — much like listening to a faint radio station that is right next to a strong station. The new device, which was designed specifically for the NRAO’s Very Long Baseline Array (VLBA), offers extremely flexible tuning with fewer limitations than previous designs. It has almost limitless output frequency tuning resolution (often referred to as synthesizer step size) and can achieve any particular frequency in multiple ways by simply changing the settings. This avoids combinations that might otherwise generate unwanted responses that degrade the signal. The new synthesizer’s much improved tuning resolution and flexibility will allow new science to be performed with the VLBA. It also will increase the ability of the VLBA to cooperate with radio astronomy institutions around the world for extremely high-resolution studies of the cosmos. The patent was issued to Associated Universities, Inc., and credits co-inventors Richard Scott, Walter Brisken, and Robert Long.


The National Radio Astronomy Observatory is a facility of the National Science Foundation, operated under cooperative agreement by Associated Universities, Inc.