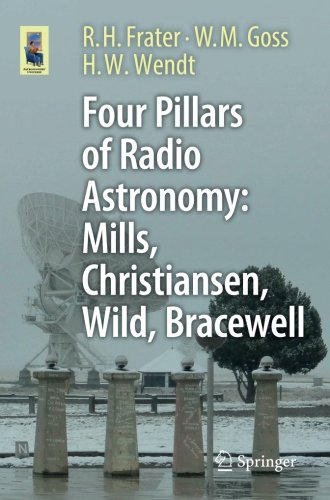 A new book explores the early history of radio astronomy by telling the stories of four pioneers who laid the foundations not only for today’s cutting-edge research facilities but also for technologies that have transformed daily life. Four Pillars of Radio Astronomy: Mills, Christiansen, Wild, Bracewell, recounts the saga of a pathfinding team of Australians who made unique contributions in the era following World War II. Their contributions helped build radio astronomy into a worldwide scientific powerhouse that would transform our understanding of the Universe. Along the way they also would pave the way for technologies ranging from Wi-Fi to medical imaging.

In addition, Bernie Mills, Chris Christiansen, Paul Wild and Ron Bracewell created an environment that encouraged scientific discovery and influenced the careers of many researchers who followed them. Authors Bob Frater, Miller Goss, and Harry Wendt weave the stories of these remarkable pioneers into a narrative aimed at a general, non-specialist audience interested in science and astronomy.

The book, published by Springer, is available from Amazon.