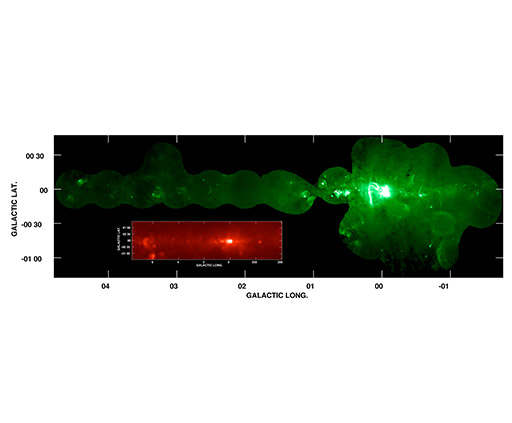 Twenty years ago, astronomers discovered a number of enigmatic radio-emitting filaments concentrated near the center of the Milky Way Galaxy. These features initially defied explanation, but a new study of radio images of the Galactic center may point to their possible source.

By combining data from the National Science Foundation’s Very Large Array (VLA) and Robert C. Byrd Green Bank Telescope (GBT) astronomer Farhad Yusef-Zadeh of Northwestern University has found evidence that at least some of the filaments spring from the concentrated star-formation regions that populate the Galactic center.

Yusef-Zadeh presented his findings at the Denver, Colorado, meeting of the American Astronomical Society. William Cotton of the National Radio Astronomy Observatory (NRAO) in Charlottesville, Virginia, and William Hewitt of Northwestern University also contributed to this research.

“Astronomers have long puzzled over the cause of these striking features,” said Yusef-Zadeh, “and the turbulent nature of the Galactic center has made detailed analysis difficult. With new multi-wavelength radio images of the Galactic center, however, we can finally see a link between areas of starburst activity and these long-linear filaments.”

“The problem with this hypothesis is that more recent images have revealed a population of weaker filaments oriented randomly in relation to the plane of the Galaxy,” said Yusef-Zadeh. “This makes it difficult to explain the origin of the filaments by an organized Galactic magnetic field.”

By comparing the GBT images with earlier VLA data taken of the same region, Yusef-Zadeh determined that a number of the non-thermal filaments seemed to connect to concentrated areas of thermal emission, which identify pockets of star formation.

“What this showed us is that two seemingly disparate processes, thermal and non-thermal radio emission, can be created by the very same phenomenon,” said Yusef-Zadeh. “In this case, that phenomenon is pockets of starburst activity.”

Yusef-Zadeh notes that the exact mechanism for how the areas of starburst generate the magnetic fields is still being investigated. “There are many ideas about the mechanism that generates these filaments,” added Yusef-Zadeh, “but one possibility is that they are produced by the collision of winds blown off from individual stars.”

The star-forming regions associated with the filaments may contain about 100 massive stars each.

The center of the Milky Way Galaxy is shrouded from optical telescopes by dense clouds of dust and gas. Radio telescopes, however, are able to pierce through the optical veil and see the features within. Concealed at the very heart of our Galaxy is a supermassive black hole. Known as Sagittarius A* (pronounced A-star), this area is a very powerful source of radio waves and was first detected by Karl Jansky in 1932.

While the VLA can image fine scale structures with great precision, it can not always detect extended radio emission. The GBT, however, can help fill in the gaps. Together, they create a more complete image than either instrument could produce separately. “The ability to combine the data from the two telescopes,” said Cotton, “gives us a very powerful tool for understanding how the smallest features relate to the overall structure. This is particularly important when you want to study an area like the center of our Galaxy.”

In addition to Yusef-Zadeh, Hewitt, and Cotton, the GBT survey was conducted by Casey Law and Douglas Roberts of Northwestern University; and Ron Maddalena of the National Radio Astronomy Observatory.

The VLA is a single radio telescope made up of 27 separate antennas located on the Plains of San Agustin near Socorro, New Mexico. The GBT is the world’s largest fully steerable radio telescope, and it is located in Green Bank, West Virginia. Both telescopes are operated by the NRAO. 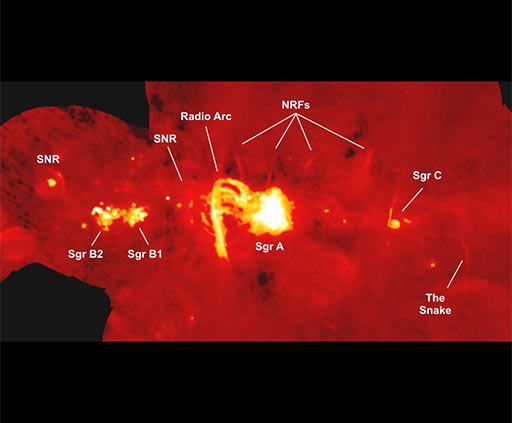