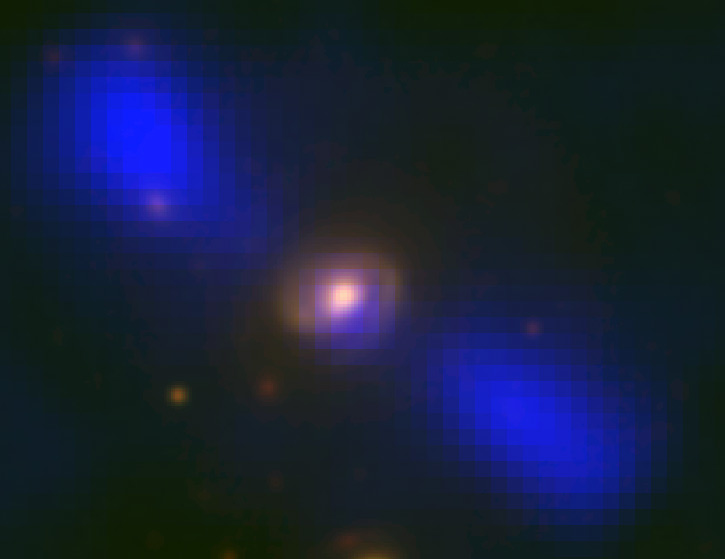 With the help of citizen scientists, a team of astronomers has found an important new example of a very rare type of galaxy that may yield valuable insight on how galaxies developed in the early Universe. The new discovery technique promises to give astronomers many more examples of this important and mysterious type of galaxy.

The galaxy they studied, named J1649+2635, nearly 800 million light-years from Earth, is a spiral galaxy, like our own Milky Way, but with prominent “jets” of subatomic particles propelled outward from its core at nearly the speed of light. The problem is that spiral galaxies are not supposed to have such large jets.

“The conventional wisdom is that such jets come only from elliptical galaxies that formed through the merger of spirals. We don’t know how spirals can have these large jets,” said Minnie Mao, of the National Radio Astronomy Observatory (NRAO).

J1649+2635 is only the fourth jet-emitting spiral galaxy discovered so far. The first was found in 2003, when astronomers combined a radio-telescope image from the Karl G. Jansky Very Large Array (VLA) and a visible-light image of the same object from the Hubble Space Telescope. The second was revealed in 2011 by images from the Sloan Digital Sky Survey and the VLA, and the third, found earlier this year, also was discovered by combining radio and visible-light images.

“In order to figure out how these jets can be produced by the ‘wrong’ kind of galaxy, we realized we needed to find more of them,” Mao said.

To do that, the astronomers looked for help. That help came in the form of large collections of images from both radio and optical telescopes, and the hands-on assistance of volunteer citizen scientists. The volunteers are participants in an online project called the Galaxy Zoo, in which they look at images from the visible-light Sloan Digital Sky Survey and classify the galaxies as spiral, elliptical, or other types. Each galaxy image is inspected by multiple volunteers to ensure accuracy in the classification.

So far, more than 150,000 Galaxy Zoo participants have classified some 700,000 galaxies. Mao and her collaborators used a “superclean” subset of more than 65,000 galaxies, for which 95 percent of those viewing each galaxy’s image agreed on the classification. About 35,000 of those are spiral galaxies. J1649+2635 had been classified by 31 Galaxy Zoo volunteers, 30 of whom agreed that it is a spiral.

Next, the astronomers decided to cross-match the visible-light spirals with galaxies in a catalog that combines data from the NRAO VLA Sky Survey and the Faint Images of the Radio Sky at Twenty Centimeters survey, both done using the VLA. This job was done by Ryan Duffin, a University of Virginia undergraduate working as an NRAO summer student. Duffin’s cross-matching showed that J1649+2635 is both a spiral galaxy and has powerful twin radio jets.

“This is the first time that a galaxy was first identified as a spiral, then subsequently found to have large radio jets,” Duffin said. “It was exciting to make such a rare find,” he added.

Jets such as those seen coming from J1649+2635 are propelled by the gravitational energy of a supermassive black hole at the core of the galaxy. Material pulled toward the black hole forms a rapidly-rotating disk, and particles are accelerated outward along the poles of the disk. The collision that presumably forms an elliptical galaxy disrupts gas in the merging galaxies and provides “fuel” for the disk and acceleration mechanism. That same disruption, however, is expected to destroy any spiral structure as the galaxies merge into one.

J1649+2635 is unusual not only because of its jets, but also because it is the first example of a “grand design” spiral galaxy with a large “halo” of visible-light emission surrounding it.

“This galaxy presents us with many mysteries. We want to know how it became such a strange beast,” Mao said. “Did it have a unique type of merger that preserved its spiral structure? Was it an elliptical that had another collision that made it re-grow spiral arms? Is its unique character the result of interaction with its environment?”

“We will study it further, but in addition, we need to see if there are more like it,” Mao said.

“We hope that with projects like the Galaxy Zoo and another called Radio Galaxy Zoo, those thousands of citizen scientists can help us find many more galaxies like this one so we can answer all our questions,” Mao said. Mao and her colleagues have dubbed these rare galaxies “Spiral DRAGNs,” an acronym for the technical description, “Double-lobed Radio sources Associated with Galactic Nuclei.”