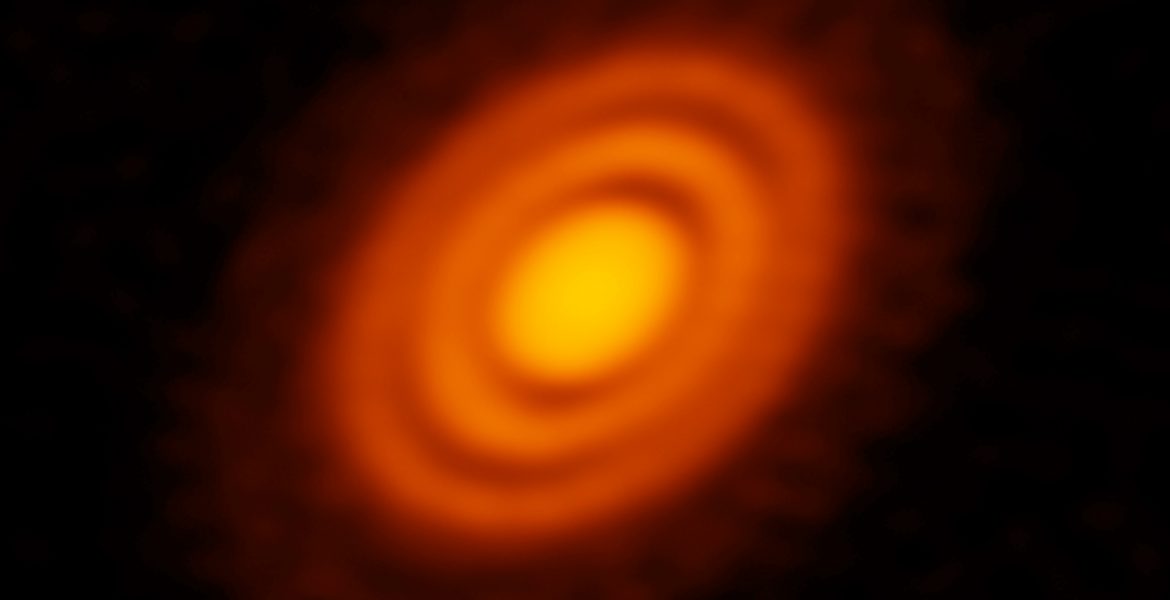 Astronomers now know that our galaxy is teeming with planets, from rocky worlds roughly the size of Earth to gas giants bigger than Jupiter. Nearly every one of these exoplanets has been discovered in orbit around a mature star with a fully evolved planetary system.

New observations with the Atacama Large Millimeter/submillimeter Array (ALMA) contain compelling evidence that two newborn planets, each about the size of Saturn, are in orbit around a young star known as HD 163296. These planets, which are not yet fully formed, revealed themselves by the dual imprint they left in both the dust and the gas portions of the star’s protoplanetary disk.

Previous observations of other young star systems have helped to reshape our understanding of planet formation. For example, ALMA’s images of HL Tauri and TW Hydrae revealed striking gaps and prominent ring structures in the stars’ dusty disks. These features may be the tantalizing first signs that planets are being born. Remarkably, these signs appeared around much younger stars than astronomers thought possible, suggesting that planet formation can begin soon after the formation of a protoplanetary disk.

“ALMA has shown us amazing images and never-before-seen views of the rings and gaps around young stars that could be the hallmarks of planet formation. However, since we were only looking at the dust in the disks with sufficient detail, we couldn’t be sure what created these features,” said Andrea Isella, an astronomer at Rice University in Houston, Texas, and lead author on a paper published in Physical Review Letters.

In studying HD 163296, the research team used ALMA to trace, for the first time, the distribution of both the dust and the carbon monoxide (CO) gas components of the disk at roughly the same level of detail.

These observations revealed three distinct gaps in HD 163296’s dust-filled protoplanetary disk. The first gap is located approximately 60 astronomical units from the central star, which is about twice the distance from our Sun to Neptune. (An astronomical unit – AU – is the average distance from the Earth to the Sun.) The other two gaps are 100 AU and 160 AU from the central star, well beyond the extent of our solar system’s Kuiper Belt, the region of icy bodies beyond the orbit of Neptune.

Using ALMA’s ability to detect the faint millimeter-wavelength “glow” emitted by gas molecules, Isella and his team discovered that there was also an appreciable dip in the amount of CO in the outer two dust gaps.

By seeing the same features in both the gas and the dust components of the disk, the astronomers believe they have found compelling evidence that there are two planets coalescing remarkably far from the central star. The width and depth of the two CO gaps suggest that each potential planet is roughly the same mass as Saturn, the astronomers said.

In the gap nearest to the star, the team found little to no difference in the concentration of CO gas compared to the surrounding dusty disk. This means that the innermost gap could have been produced by something other than an emerging planet.

“Dust and gas behave very differently around young stars,” said Isella. “We know, for example, that there are certain chemical and physical process that can produce ringed structures in the dust like the ones we have seen previously. We certainly believe these structures could be the work of a nascent planet plowing through the dust, but we simply can’t rule out other possible explanations. Our new observations provide intriguing evidence that planets are indeed forming around this one young star.”

HD 163296 is roughly 5 million years old and about twice the mass of the Sun. It is located approximately 400 light-years from Earth in the direction of the constellation Sagittarius.

This research is presented in a paper titled “Ringed structure of the HD 163296 disk revealed by ALMA,” by Isella et al., published in Physical Review Letters. [http://journals.aps.org/prl]. 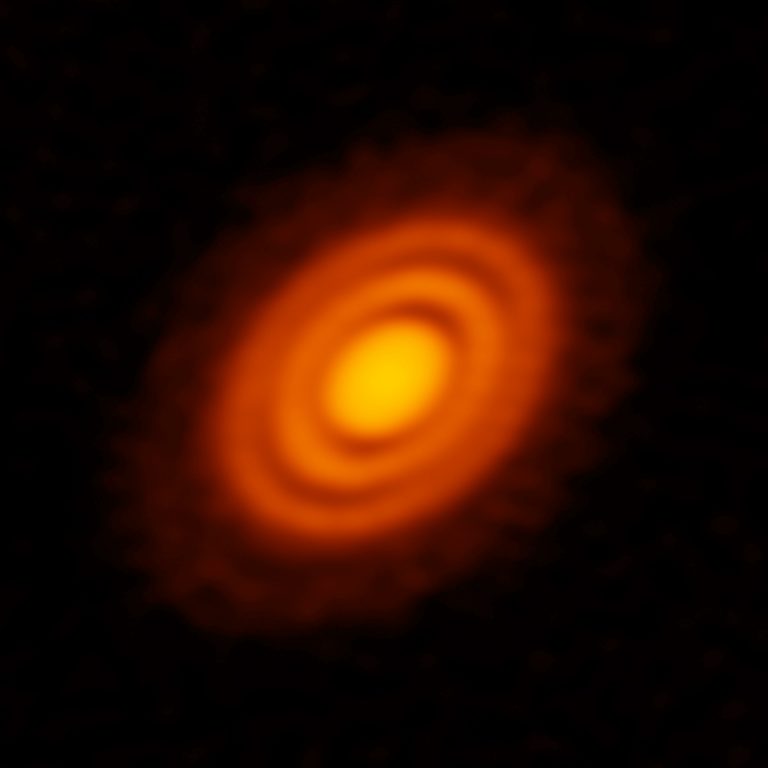 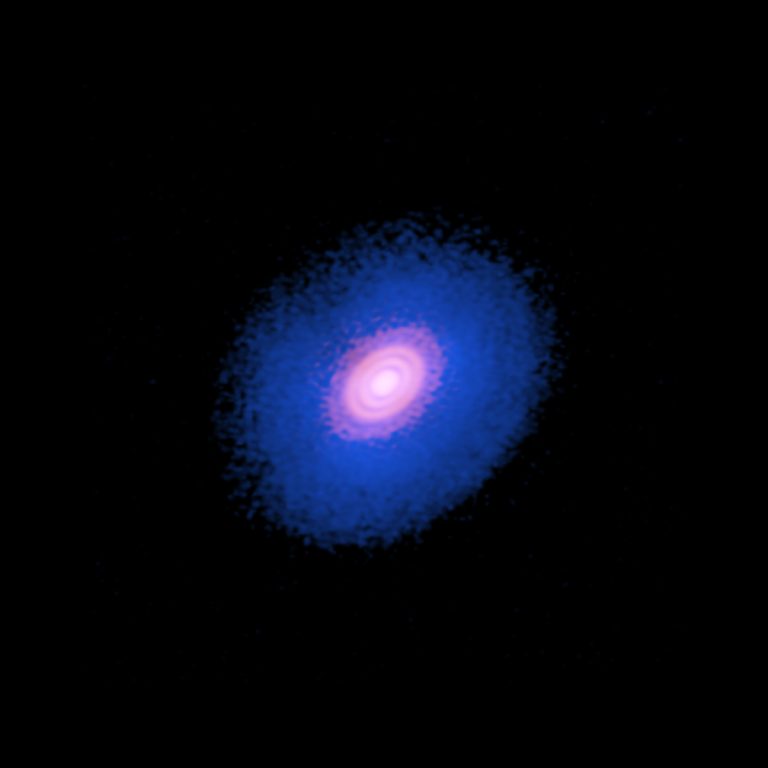 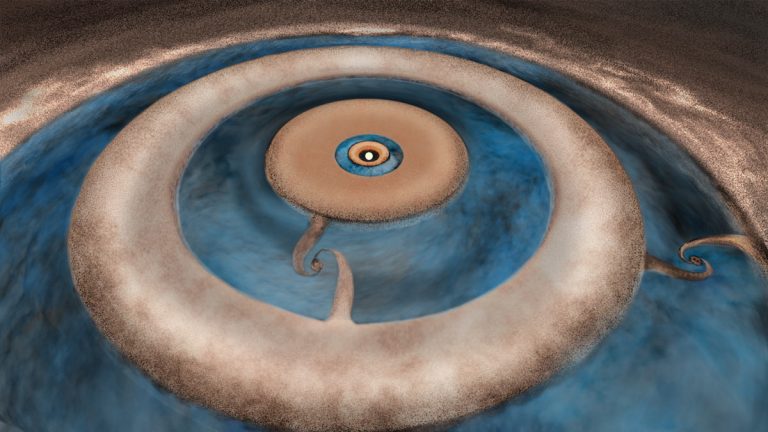 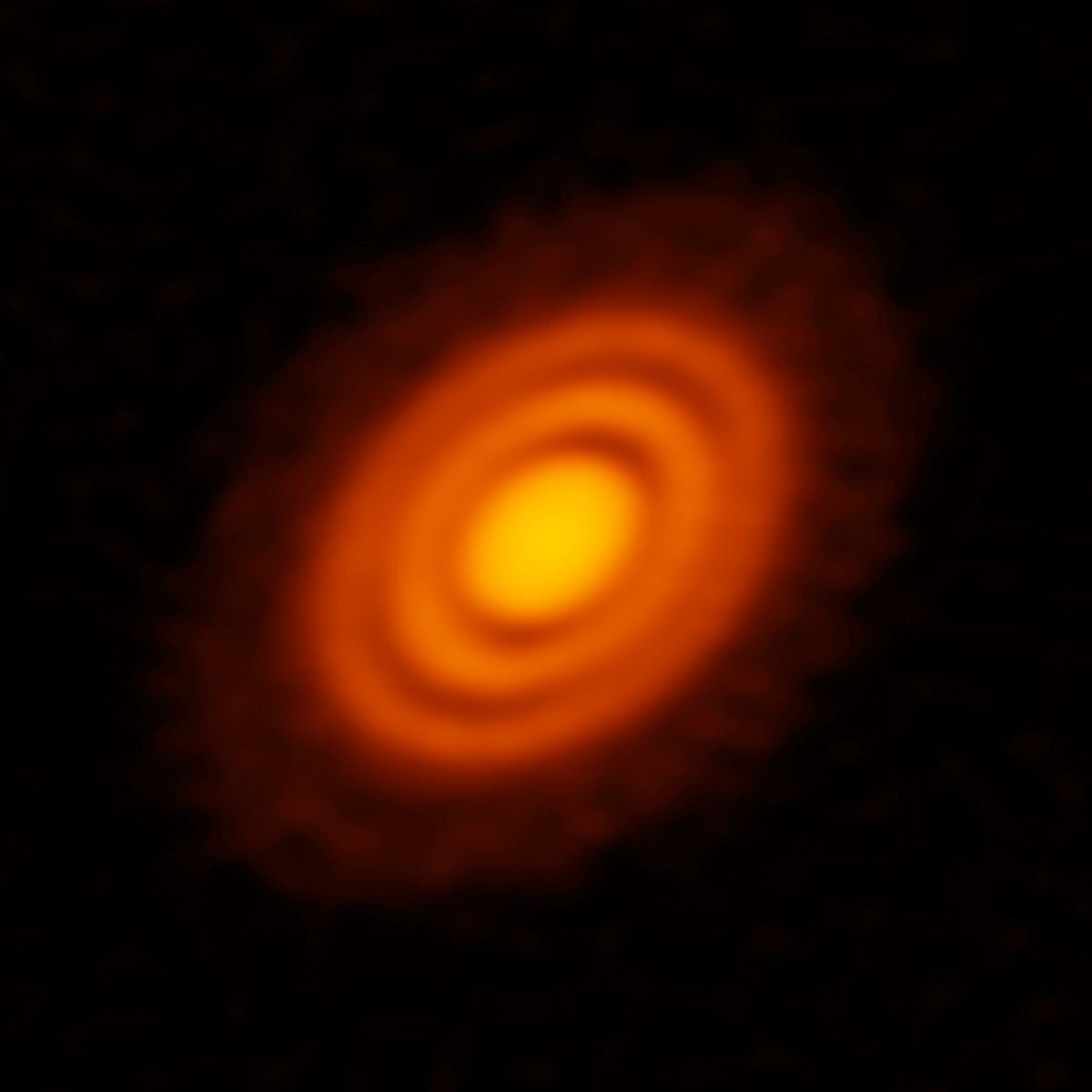 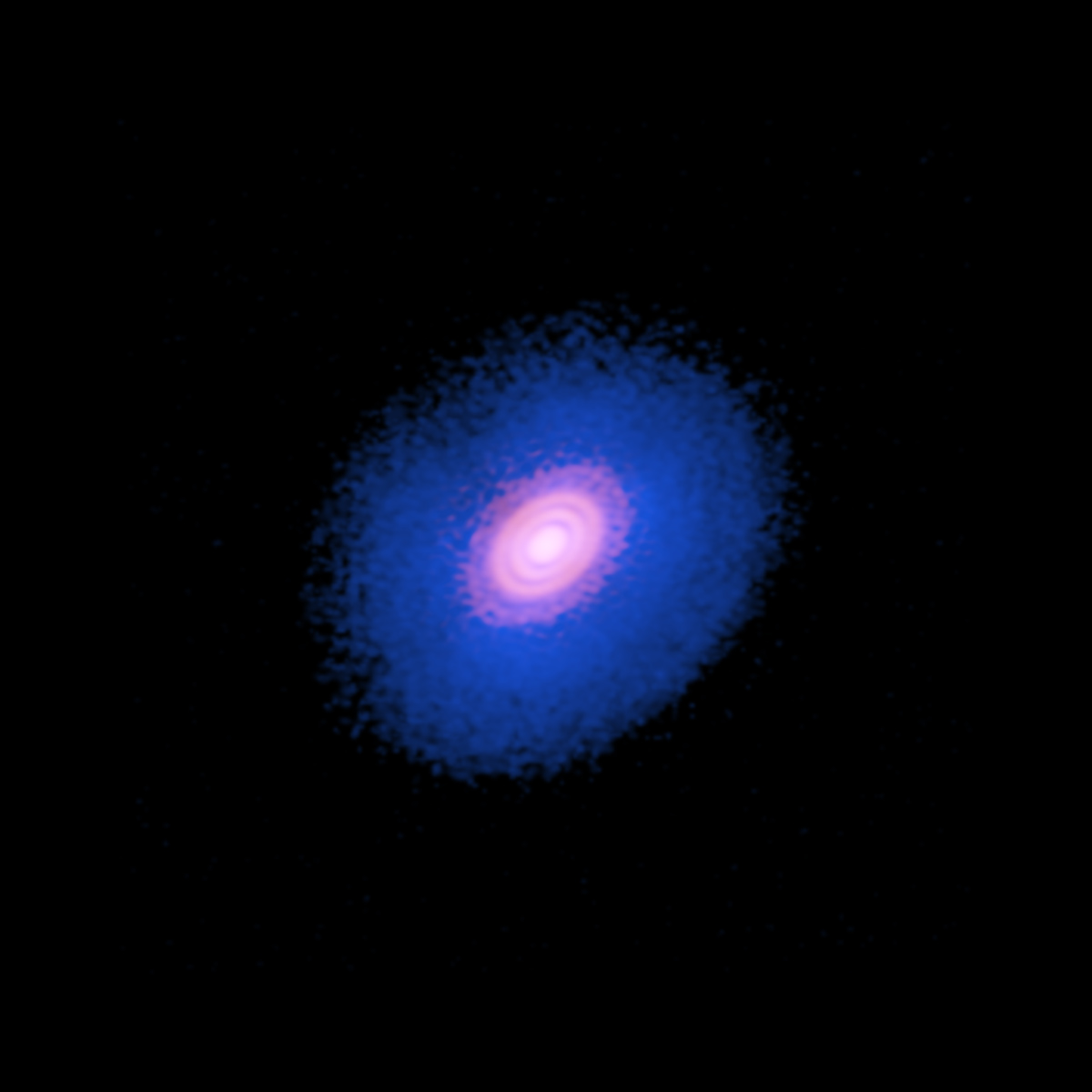 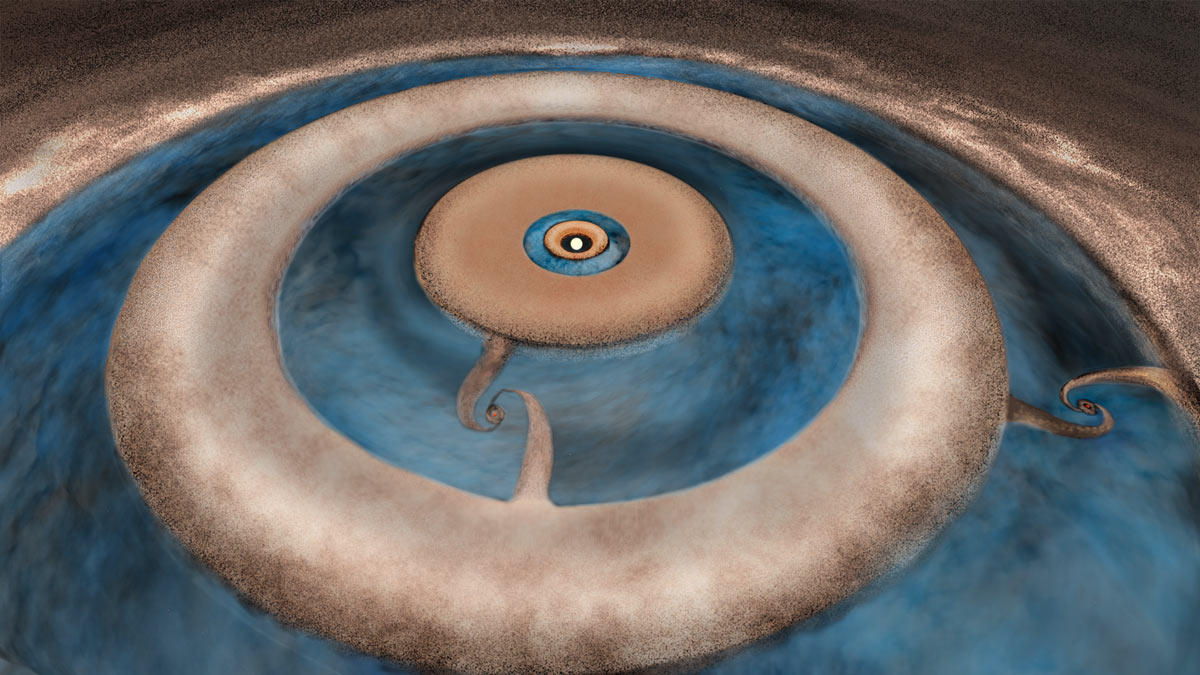