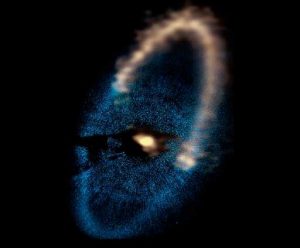 Fomalhaut is a star with at least two planets in orbit around it. These planets herd dust and gas into a narrow ring between them that is seen optically (blue) and by ALMA (gold). 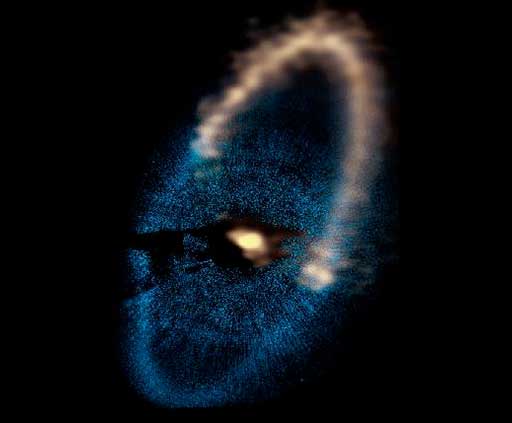 Fomalhaut is a star with at least two planets in orbit around it. These planets herd dust and gas into a narrow ring between them that is seen optically (blue) and by ALMA (gold).

In order to answer the most basic questions about planetary systems, such as their origin, their evolution, and how common they are in the Universe, scientists need to find and study many more planets around other people’s suns. However, detecting planets circling other stars light-years away is a particularly difficult task.

Even the nearest stars are trillions of miles away. Their light outshines whatever planets they may have forming or already formed in orbit around them. Techniques for masking the glare of stars helps us to see dimmer bodies around them, but what if a very young star system is already masked by its own star-forming cloud?

Radio telescopes can see through the dust to the growing stars and planets within. The Very Large Array has imaged the rotating disks of dust and gas around some young stars that may someday form planets. However, the Atacama Large Millimeter/submillimeter Array was built with exoplanet-hunting in mind.

ALMA Hunts for Other Worlds

As soon as it came online, ALMA began providing valuable information about these so-called “extrasolar” planetary systems at all stages of their evolution.

Millimeter/submillimeter-wave telescope arrays such as ALMA can see more detail than current optical or infrared telescopes. The longer waves it detects are not scattered or reflected by interplanetary dust, either in the extrasolar system or our own Solar System.

Another important advantage is that, at millimeter and submillimeter wavelengths, the star is not glaring and overwhelming our view of its potential planets as it does in shorter wavelengths. While the star is still brighter than its planet, the difference in brightness between the two is far less in millimeter radiation. 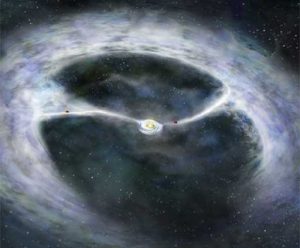 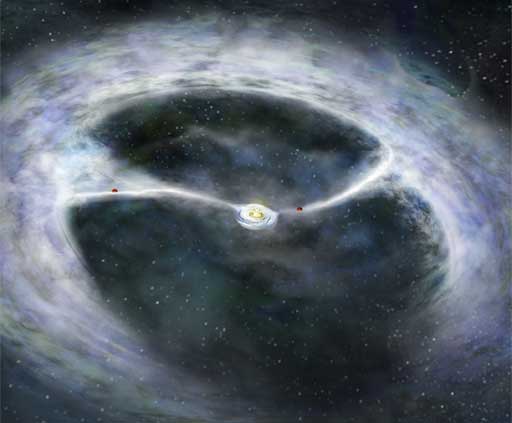 ALMA sees planetary systems in the earliest stages of their formation.

ALMA can detect many more young, low-mass stellar systems and determine if they have the disks from which planetary systems are formed. In addition, ALMA can examine the properties of these disks in detail, including their size, temperature, dust density, and chemistry.

With ALMA’s high-resolution, shorter wavelength-gathering power, we can map the particles of dust traveling around future suns to see the traffic jams, merges, and open lanes that are evidence of planets forming in a young star’s disk.

We can also see exactly where certain gases start to freeze out into solids, called the “snow zones.” Snow zones mark where materials can start to stick together, like snowballs, to make larger and larger bodies that will someday form comets, asteroids, moons, and planets.