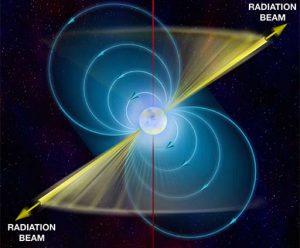 Artist’s depiction of a pulsar with the central, spinning neutron star and its powerful magnetic field (blue). Coming out of the poles are jets of charged particles escaping the star (yellow). As the star spins, the beam swings past, and we detect a pulse of radio waves. 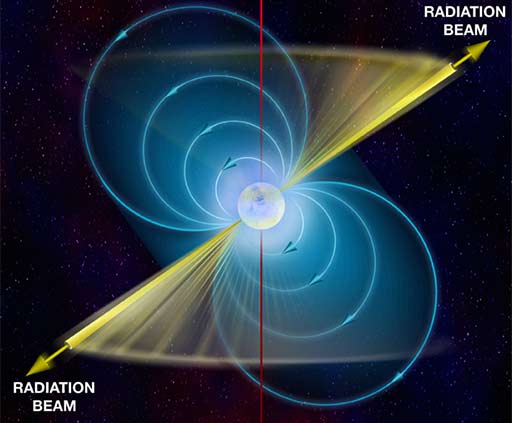 Artist’s depiction of a pulsar with the central, spinning neutron star and its powerful magnetic field (blue). Coming out of the poles are jets of charged particles escaping the star (yellow). As the star spins, the beam swings past, and we detect a pulse of radio waves.

From the Earth, a pulsar looks like a star that has a pulse, a rapid beat picked up only by radio telescopes. Discoverers Jocelyn Bell and Antony Hewish noticed that these beats were so regular that they seemed manmade. For a while, these cosmic radio sources were called LGM – Little Green Men!

Now, we know that a pulsar is better described as a zombie. It is the spinning relic of a neutron star, the superdense, no-longer-shining core of a large star that got fatally compressed in a supernova implosion.

Neutron stars are so called because normal atoms inside them no longer exist. They have had all the space squeezed out of them, collapsing electrons onto protons, leaving a sphere of neutral neutrons.

So, where does their pulse come from?

Shining or not, stars spin. If you squash a big spinning star, its spin speeds up. If an ice skater tucks in her arms as she twirls, her spin will also speed up. It’s a basic law of physics that can make neutron stars the size of cities spin over 700 times per second.

Shining or not, stars also have magnetic fields. If you squash a big spinning star, its magnetic field bunches up and becomes super concentrated, super strong. The magnetic poles on a neutron star act like fountains, an escape valve for charged particles that get trapped in the star’s enormously strong magnetic field.

As a neutron star spins, its polar fountains turn with it, like an interstellar lighthouse beam. From Earth, we see the beam as it quickly sweeps past us — there, gone, there, gone — many times a second. That looks like a pulse from here. Hence the name, “pulsar.”

A neutron star’s pulses can come at us hundreds of times a second, ticking like a superfast clock with a millisecond hand. We can use such a fast and distant clock to time a pulsar’s daily activities. If the pulsar is in orbit around another star, we can use this clock to time their tug-of-war and learn the weights behind their pulls on each other.

Albert Einstein figured out that an object’s weight can affect how light travels near it. A really massive object like a planet or a star curves space around itself. Light traveling along through space will follow that curve. 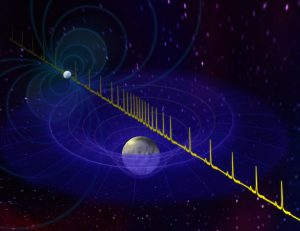 In this artist's drawing, the pulses from a pulsar are distorted as the radio waves pass through the gravity pull of a massive object. With super fast processing computers, we can measure the delay and use it to calculate the mass of the object that caused them. 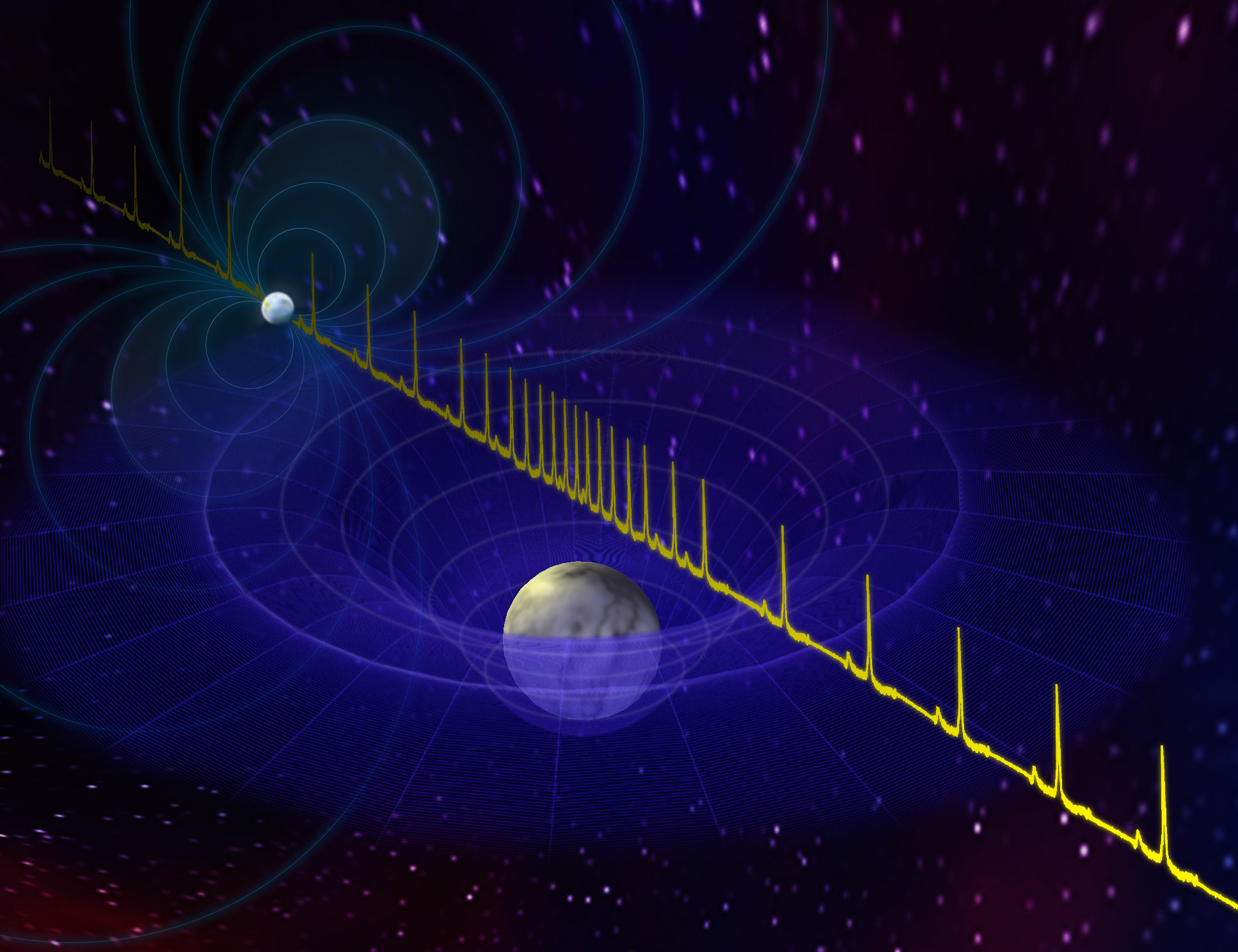 In this artist's drawing, the pulses from a pulsar are distorted as the radio waves pass through the gravity pull of a massive object. With super fast processing computers, we can measure the delay and use it to calculate the mass of the object that caused them.

If a pulsar is in orbit around a massive companion star, its pulses of light will follow the space curve caused by that star. From our view of their orbit, when the companion white dwarf star is nearly in front of the pulsar, the pulses take a little longer to reach us than when the white dwarf is clear of the pulsar.

This kind of delay was predicted by Einstein and first tested by astronomer Irwin Shapiro. Now called the “Shapiro Delay,” the effect can be measured with a superfast stopwatch and a lot of light.

The amount of delay tells you the amount of mass of the star causing the delay. Sweet, but very difficult to measure: A Shapiro Delay can be only a millionth of a second!

Thankfully, the Green Bank Telescope has over two acres of collecting area, meaning it can capture lots and lots of radio waves at once. The more waves we grab, the easier it is to catch all of the superfast on and off radio pulses of a pulsar. Millisecond pulsars are older pulsars that spin every thousandth of a second. They would be received as static, were it not for the sophisticated processing equipment used on the GBT.

When Game Computers Come Hand in Hand With Pulsar’s Science

Gaming computers have pushed processor chip development into peta-op speeds, meaning that they can perform 1,000,000,000,000,000 operations per second. The Green Bank Ultimate Pulsar Processing Instrument, or GUPPI for short, is an array of eight computers outfitted with these chips. They can plot the signals coming from the Universe’s fastest known pulsars so finely that we can easily spot any Shapiro Delays in their beats.

With this method, astronomers using the GBT discovered the most massive pulsars ever found. It has found least two neutron stars with a mass about twice the mass of the Sun, perhaps even more.

With the GBT’s data, physicists are rethinking how these stars are made.

Using the GBT and its superfast processing equipment, plus similar setups at Arecibo in Puerto Rico, a group of astronomers and physicists routinely observe the signals of almost 80 millisecond pulsars. The project, called NANOGrav, will continue to observe these target pulsars for many years.

It takes a lot of patience and a highly-precise set of instrumentation to measure these hundred nanosecond blips — that’s only one ten-millionth of a second!

They hope to find tiny changes in the ticking of all of these pulsar clocks that would indicate the Earth is bobbing on a sea of gravitational waves — likely caused by super-massive black holes orbiting each other in galaxies across the Universe.