The Very Long Baseline Array is a network of ten observing stations located across the United States. Each station consists of a 25-meter radio antenna dish and a control building. Radio signals captured by each antenna are amplified, digitized and recorded. The recorded data are then sent to Socorro, NM to be processed by a powerful computer known as a correlatorCorrelatorA specialized supercomputer that multiplies the data from two antennas and averages the result over time. Essentially the correlator only selects the data that is spotted and analyzed by both antennas, which means the data that isn’t spotted by both is dropped. . By combining their data, the stations form one of the world’s most powerful radio cameras.

Locations
The VLBA stations are located in areas with limited radio interference, and widely spread across the country. The distance between any two stations is known as their baselineBaselineThe distance between two antennas that work together to make astronomical observations. The longer the baseline, the greater the resolution – or ability to detect fine details. For example, in the Very Long Baseline Array the baseline between its easternmost antenna in St. Croix and westernmost antenna in Hawaii is nearly 5,000 miles. The maximum current baseline of the ALMA telescope is approximately 15 kilometers (10 miles). . The longer the baseline, the better the angular resolutionResolutionThe ability of a telescope to show detail. One common way to describe the resolution of a telescope is to state the minimum angular separation at which a double star can be distinguished as two separate stars. (see double star for more). The most widely separated antennas are at Mauna Kea in Hawaii and St. Croix in the U.S. Virgin Islands, which are 8,611 km apart. While each VLBA antenna is identical, each location is unique. Each station also has a webcam, so you can view them in real time (http://www.vlba.nrao.edu/sites/SITECAM/NLcam.shtml)

Jets can also come from a protostar. (See protostar) material from a neutron starNeutron StarA small compressed core of a star that has gone through supernova (star explosion). These stars are almost completely made up of only neutrons and have a strong gravitational field. merger
Measuring the precise locations and distances of Fast Radio BurstsFast Radio BurstA Fast Radio Burst, or FRB, is a powerful, but fleetingly short-lived, burst of radio light. Recent observations of one repeating FRB -- the only such FRB currently known to exist -- suggest that at least some may originate in the highly magnetized regions near supermassive black holes. FRBs may be caused by various cosmic phenomena.
Settling the controversy over the distance to the Pleiades
Mapping the spiral arms of our galaxy
Observing the rotation of an asteroid passing near Earth
Tracking the collision of powerful stellar winds
Measuring water masers to accurately determine cosmic distances

High precision observations are the VLBA’s greatest strength. With its unmatched pinpoint accuracy, astronomers can measure the positions and distances of cosmic objects to determine their masses, makeup and movement. 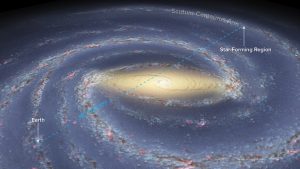 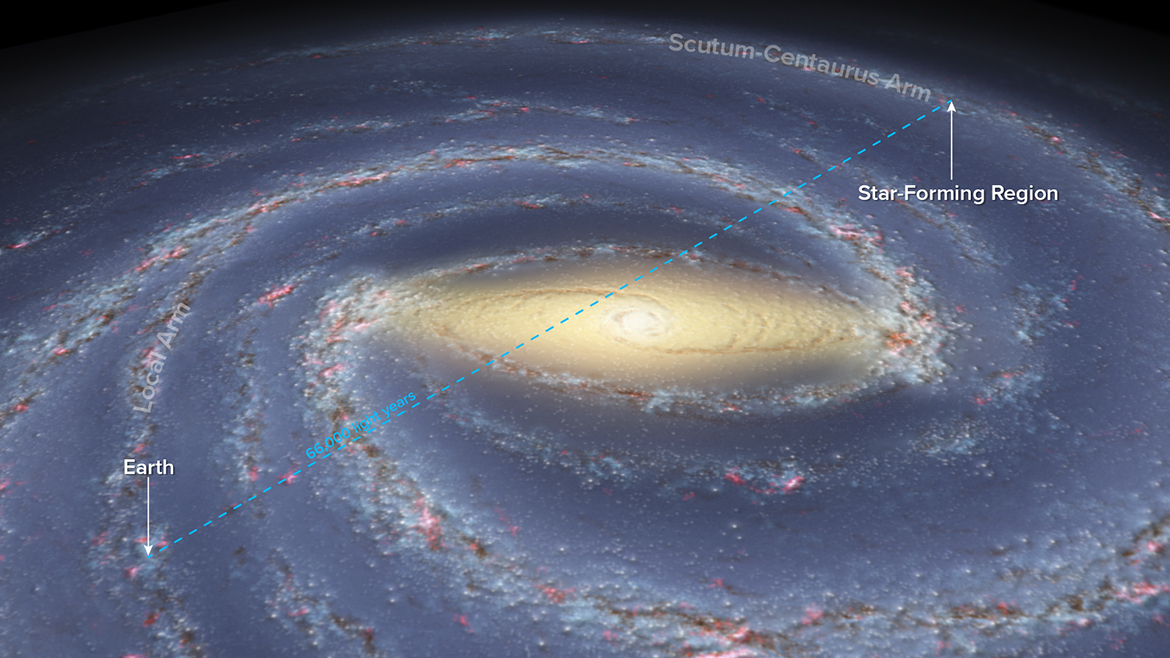 The VLBA can measure the position and distance of radio sources extremely well, so it is an excellent tool for mapping where things are in the heavens. By observing water masers (naturally occurring “lasers,” but with microwaves instead of visible light) the VLBA can determine distances across billions of light years to study the amount of dark energy in the universe. It can measure the shape and motion of galaxies, and predict when galaxies will collide.


It measures the exact location of planets in our solar system, ensuring that spacecraft sent to Mars and other planets will reach their destination. The VLBA also provides the most accurate positions and distances of stars. It also maps the positions of quasars with exquisite precision, which provides a celestial reference grid used by other telescopes.

Monitoring the Changing Earth
The VLBA can determine the location of each of its dishes to within a small fraction of an inch. It does this by observing very distant quasars. Quasars are brilliant beacons in the sky. They are powered by supermassive black holesBlack HoleAn object – typically a collapsed star – whose gravity is so strong that its escape velocity exceeds the speed of light., and are located billions of light years away. They are so distant they can be used as fixed points in the cosmos. By observing the directions of these quasars relative to each telescope, the VLBA tracks the position of each dish,

With the support of the US Naval Observatory, the VLBA telescopes then act like pins tacked to the Earth’s crust; any movement of the crust shows up as a change in distances between the telescopes. With the exact ground positioning of the VLBA, scientists can monitor movements of the Earth’s crust to learn how they reflect wind patterns and climate change. They also help GPS services improve their accuracy.

Tracking Near-Earth Asteroids
Asteroids can be studied by bouncing radio signals off their surface. When radar facilities beam radio pulses on to nearby asteroids, the VLBA’s telescopes observe the pulses as they return to Earth. This allows the VLBA to pinpoint an asteroid’s location over time. The precise timing of these reflections reveals the asteroid’s spin rate and direction and allows astronomers to calculate changes in its orbit.

The orbits of some asteroids cross paths with Earth’s orbit. Asteroids have collided with Earth in the past, creating fireballs and even craters on Earth’s surface. If one were to strike Earth near a populated area, the result could be devastating. With the VLBA’s timing accuracy, astronomers track the orbits of potentially threatening asteroids, giving us time to prepare for a collision and perhaps even change its course.

The VLBA also helps us look to the future by monitoring asteroids humanity might explore in the future. Whether it’s a mission to learn more about the outer solar system, or the quest to mine asteroid resources, the more we know about an asteroid’s orbit and composition, the better prepared we can be for future missions. 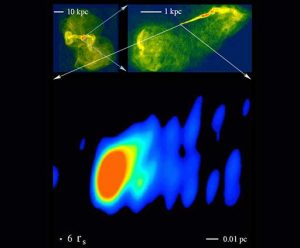 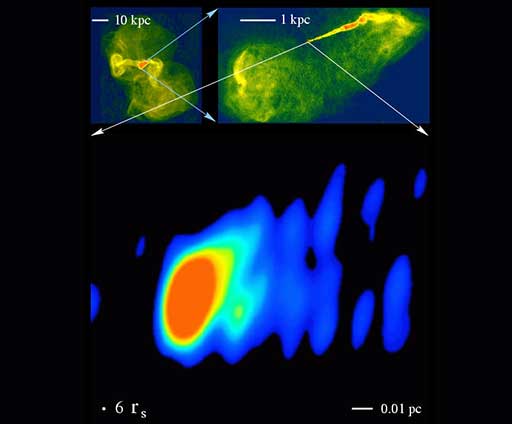 Studying Black Holes
The VLBA is one of the world’s most powerful radio cameras. With it, astronomers can peer through dense clouds of gas and dustDustTiny grains of material that block and scatter visible light and shorter wavelengths. Longer wavelengths are able to pass through dust in space, which has allowed astronomers to image previously hidden objects, such as the center of the Milky Way Galaxy. such as those surrounding supermassive black holes. The VLBA can see into the heart of a galaxy, watching it pulse as the black hole whip out quintillions of tons of charged gas every day. By recording time-lapse movies of supercharged gas speeding away from black holes, astronomers can update theories of how supermassive black holes feed and grow.

The VLBA was designed and built to operate 24 hours a day, every day of the year. Since every VLBA antenna is built to the same design, calibration of the data is much simpler than data gathered from antennas of varying designs. The continuous operation of the telescope means data can be gathered on a schedule best suited for the experiments. 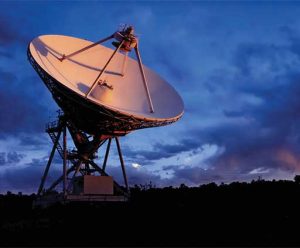 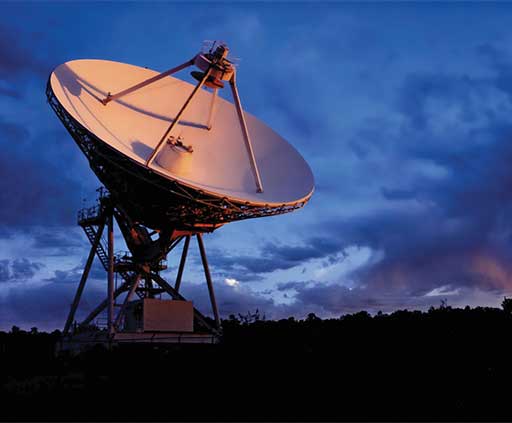 Since the VLBA antennas are widely scattered across the United States, it isn’t feasible for the data to be processed in real time. Instead, the signals from each antenna are digitized locally and recorded on a computer. The time when each signal was received is also recorded, accurate to within a few billionths of a second. The computer’s hard drives are then shipped to the VLBA operations center in Socorro NM. This method means the bandwidth of the VLBA is limited by the recording rate of each station, but new advances in recording and processing will allow the VLBA to perform at greater sensitivity in the future.

Data captured from radio interferometersInterferometerA radio telescope consisting of two or more antennas at some distance from one another. It uses the phenomenon of interference, which combines the signals of each antenna that is part of the interferometer, to increase the effectiveness of the antennas’ ability to sharpen the details of an image taken of an object in the cosmos. are processed by a correlator, which compares the data from each antenna to create a radio image. The correlator at most observatories is a specialized computer. The VLBA uses a software correlator which is especially well suited to job. The software doesn’t process the data in real time, but instead reads the data from the hard drives. As the power of computers improves, the software correlator becomes more powerful, allowing more data to be processed.