Neither a hole nor really black, a stellar black hole is actually the superdense remains of a very big star that imploded, violently collapsing in on itself, during a supernova. (A supermassive black hole, hundreds to a billion times more massive than a big star, is thought to be the collapse of a gargantuan pile of matter that condensed early in the age of the Universe.) 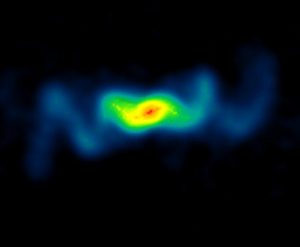 SS 433 is a giant black hole that wobbles. With the VLA and the VLBA, we have watched the wiggle of its jets over time. Here in this false-color image, you can see its corkscrew appearance. 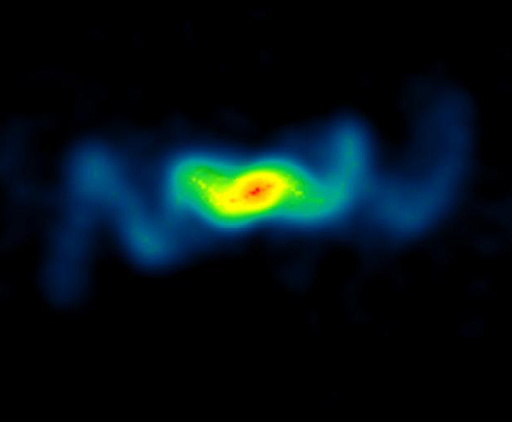 SS 433 is a giant black hole that wobbles. With the VLA and the VLBA, we have watched the wiggle of its jets over time. Here in this false-color image, you can see its corkscrew appearance.

When a star’s core implodes, the bulk of the star’s material is crushed inside so tightly that atoms cease to be atoms — their orbiting electrons smash onto their central protons to become neutrons and then smash on past that to become, well, honestly we don’t really know.

The energy released by this sudden transformation of mass into who-knows-what shoves the star’s outer gases far into space where they eventually nourish the formation of new stars and planets.

Radio telescopes see these beautiful glowing remains of exploded stars as clouds we call supernova remnants or sometimes nebulae. They are often huge, and if visible to the naked eye, would dwarf the Moon in their size on the sky.

By studying them in great detail with the VLA, we can see the scars left by the powerful activities of a black hole within them. We can also map magnetic fields and the chemistry of the clouds to learn more about the dying star’s outer structure.

The dead star’s core, smashed down to a point, keeps its mass. The crushed core has also keeps its original pull of gravity, too. In fact, if our Sun were suddenly replaced with a crushed core of the same mass, the Solar System would still orbit it…in darkness, of course.

All black holes have an event horizon. It is the edge where we can no longer see anything happening, hence the name. What’s happening beyond the horizon? Well, the same thing that is happening in front of it – but too fast for us to see.

Eyeballs and telescopes see the world around them by catching and processing waves of light traveling into them. Light waves have a speed limit and can travel no faster than 186,000 miles per second. Anything traveling faster than that is impossible to see. 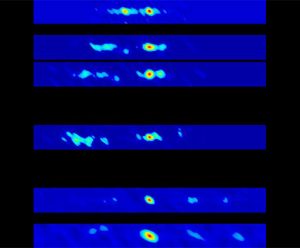 GRO J1655-40 is a pair of objects that flare in radio waves. One object is a gaseous star and the other is probably a black hole pulling gas from it. When the black hole has been overfed, it burps along its magnetic fields, and we see this in radio waves. 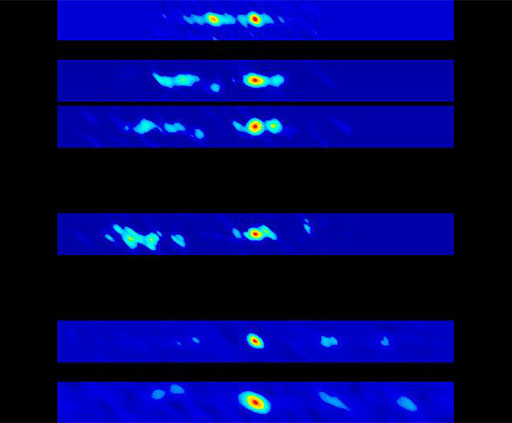 GRO J1655-40 is a pair of objects that flare in radio waves. One object is a gaseous star and the other is probably a black hole pulling gas from it. When the black hole has been overfed, it burps along its magnetic fields, and we see this in radio waves.

The pull of gravity can be overcome with speed, however. Rockets can leave the Earth’s surface, comets can whip around the Sun and escape off into space. Orbits are the compromise between speed and gravity, resulting in a path of movement that balances both.

If the Sun’s mass got jammed down into a point, then anything like a comet flying past could fly really close to the point’s full gravity strength without the expanse of a giant ball of solar gas getting in the way.

Around the compacted mass of a black hole, the pull of gravity near it is so strong that traveling at the greatest speed in the Universe, photons are not fast enough to stay in orbit and are pulled into the compacted core. This is why we call them “black” holes – no light escapes their pull; therefore, we cannot see them.

What we can see are particles in orbit around them. These orbits become crowded and frantic the closer they are to the no-escape zone. The friction in the disk of material makes it glow, giving away the position of the invisible black hole it surrounds. The first bright radio sources ever found in the sky (besides the Sun and planets) turned out to be black holes in our Galaxy.

To radio telescopes, black holes are bright and clear. We aim our most detailed eyes on the sky, the VLA and the VLBA, on black holes all over our Galaxy to watch them feed on surrounding gas and dust. We have made movies of their activities and mapped the magnetic fields that aim their charged jets.