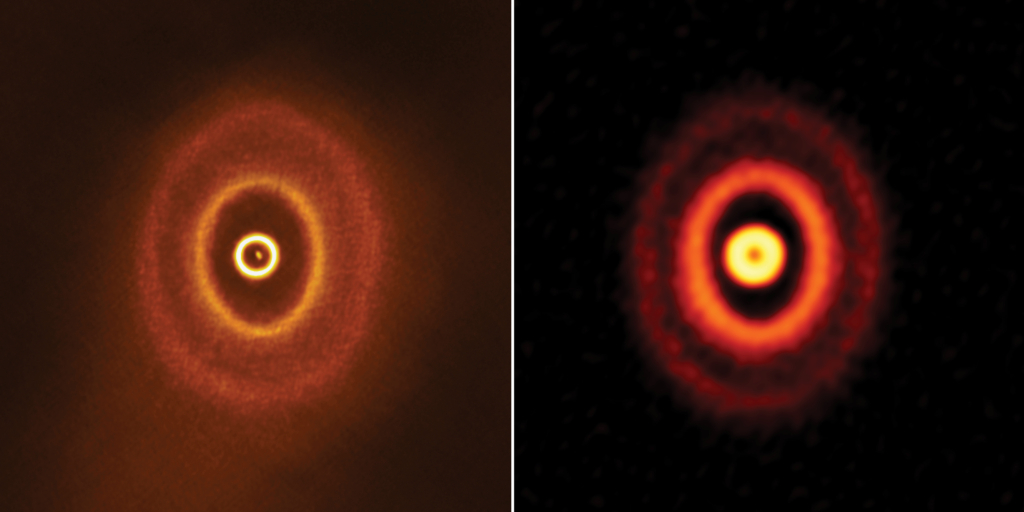 Using the Atacama Large Millimeter/submillimeter Array (ALMA)Atacama Large Millimeter/submillimeter Array (ALMA)Funded by the U.S. National Science Foundation and its international partners (NRAO/ESO/NAOJ), ALMA is among the most complex and powerful astronomical observatories on Earth or in space. The telescope is an array of 66 high-precision dish antennas in northern Chile. , two teams of astronomers have for the first time discovered a planet-forming disk with misaligned rings around a triple star system, called GW Orionis. The astronomers give two possible scenarios for the misalignment: either the disk was torn apart by the gravitational pull from the stars, or by a newborn planet.

Most stars that look like our Sun are born with siblings. Unlike the planets in our Solar System, which all orbit in the same plane around the Sun, planets around these multi-star systems often have orbits that are not aligned with the orbits of their stars. Their crooked orbits originate in the planet-forming disks, the birthplaces of planets. Studying misaligned disks around multiple stars therefore helps us understand how these planets form. Previously ALMA imaged the misaligned disks in the ‘Tatooine’ binary star system.

In a new study, two independent teams of astronomers pointed ALMA at GW Orionis. This is a young star system hosting three stars. The inner stars GW Ori A and B orbit each other and are separated by 1 auauAstronomical unit (au): A unit of distance equal to the average distance between the Earth and the Sun, or 149.6 million kilometers (93 million miles). , and the third star GW Ori C orbits its two siblings at a distance of roughly 8 au.

ALMA found three separate rings with different orientations in the massive planet-forming disk of GW Orionis, located roughly 46, 185, and 340 au from its center. The inner ring is very misaligned relative to both the outer rings and the three stars. The outermost ring is the largest ever observed in planet-forming disks. If a planet would be forming in the gap between the inner and outer ring, it would be located incredibly far away from the stars. For comparison, Neptune is only about 30 au from the Sun.

ALMA observed the misalignment in the rings of GW Orionis for the first time in 2017. “We were surprised to see the strong misalignment of the inner ring,” said Jiaqing Bi of the University of Victoria in Canada, and leader of the team that published their results in the The Astrophysical Journal Letters in May this year. “But the strange warp in the disk is confirmed by a twisted pattern that ALMA measured in the gas of the disk.”

The second team of astronomers, led by Stefan Kraus from the University of Exeter in the UK, pointed both ALMA and the European Southern Observatory’s Very Large Telescope (VLT) towards the triple stars. His team detected warm gas at the inner edge of the misaligned ring and scattered light from the warped surface of the disk.

“In our images, we see the shadow of the inner ring on the outer disk. At the same time, ALMA allowed us to measure the precise shape of the ring that casts the shadow. Combining this information allows us to derive the 3-dimensional orientation of the misaligned ring and of the warped disk surface,” said Kraus, whose team published their results in Science today.

Augmented Reality representation of the disc structure and stellar orbit of the GW Orionis triple system, as derived from the ALMA and VLT observations by Kraus et al. Orange rings are the (misaligned) rings seen by ALMA. The transparent surfaces correspond to the lower-density dust filaments that connect the rings and that dominate the emission in scattered light. Project the system in the real world with newer smart phones and tablets or use your desktop mouse to interact with the model. To obtain the view from Earth, view the model from top. CREDIT: Kraus et al., 2020; NRAO/AUI/NSF

Using telescope arrays operating at infrared wavelengths, they also mapped the orbits of the three stars for over 11 years, covering a full orbital period. The team found that the three stars do not orbit in the same plane, but that they are misaligned with respect to each other and with respect to the disk. “This proved crucial to understand how the stars shape the disk,” added team member John Monnier of the University of Michigan.

Both teams performed computer simulations to investigate what could possibly cause the inner ring to be misaligned from the rest of the disk and the stars.

Kraus and his team link the observed misalignments to the ‘disk-tearing effect’, which suggests that the gravitational pull of stars in different planes can warp and break their disks. Their simulations showed that the misalignment in the orbits of the three stars could cause the disk around them to break into distinct rings.

The simulations by Bi and his team hint at another possible explanation for the large misalignment between the inner and middle dust rings. “Our simulations show that the gravitational pull from the triple stars alone cannot explain the observed large misalignment. We think that the presence of a planet between these rings is needed to explain why the disk was torn apart,” said team member Nienke van der Marel of the University of Victoria. “This planet has likely carved a dust gap and broken the disk at the location of the current inner and outer rings,” she added.

Kraus also speculates about planets in GW Orionis: “The inner ring contains enough dust to build 30 Earths, which is sufficient for a planet to form in the ring.”

If future studies find this exotic planet – whether it already exists or is still forming – it would be the first planet ever observed to orbit three stars, and it would possess a very unusual orbit. 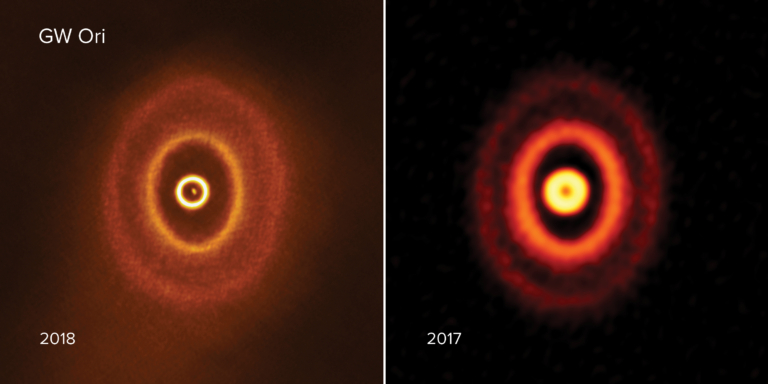 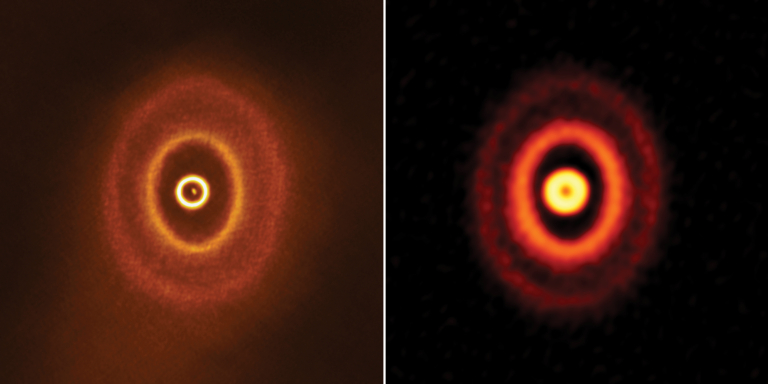 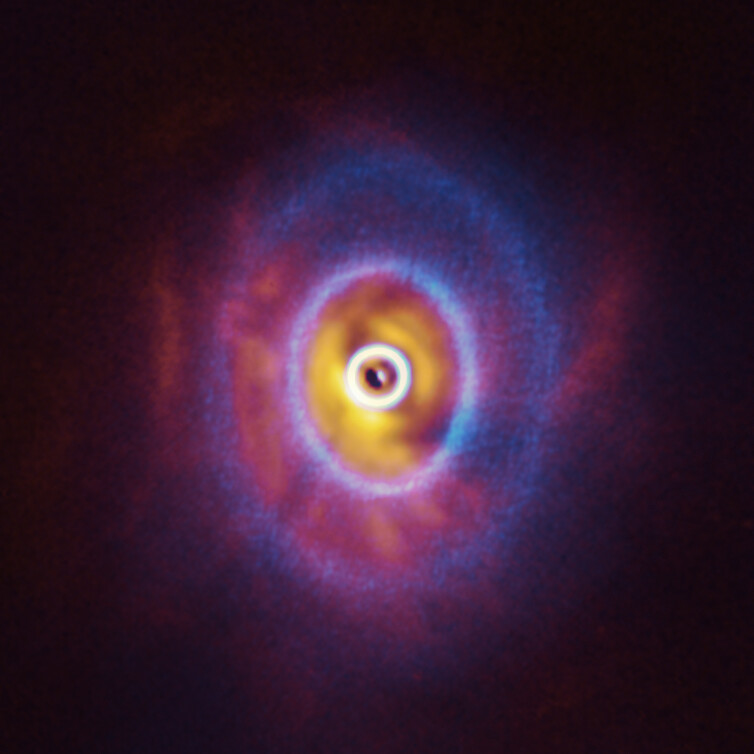 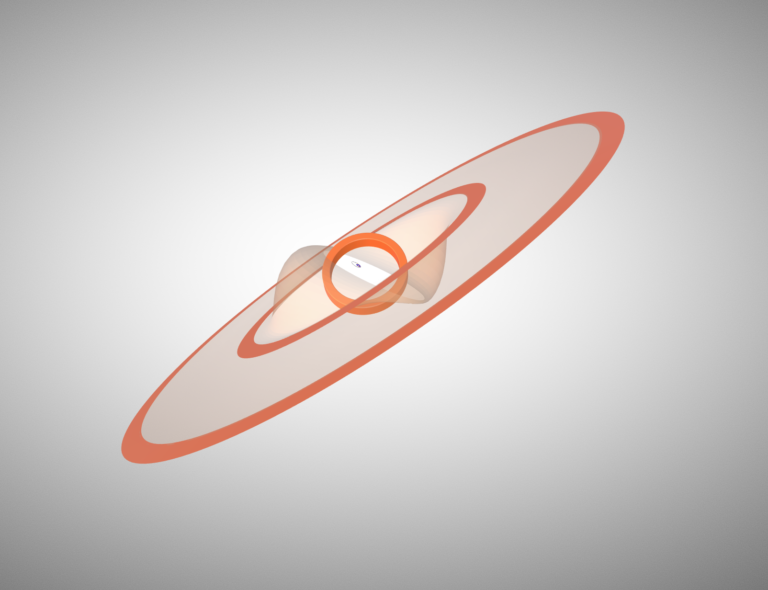 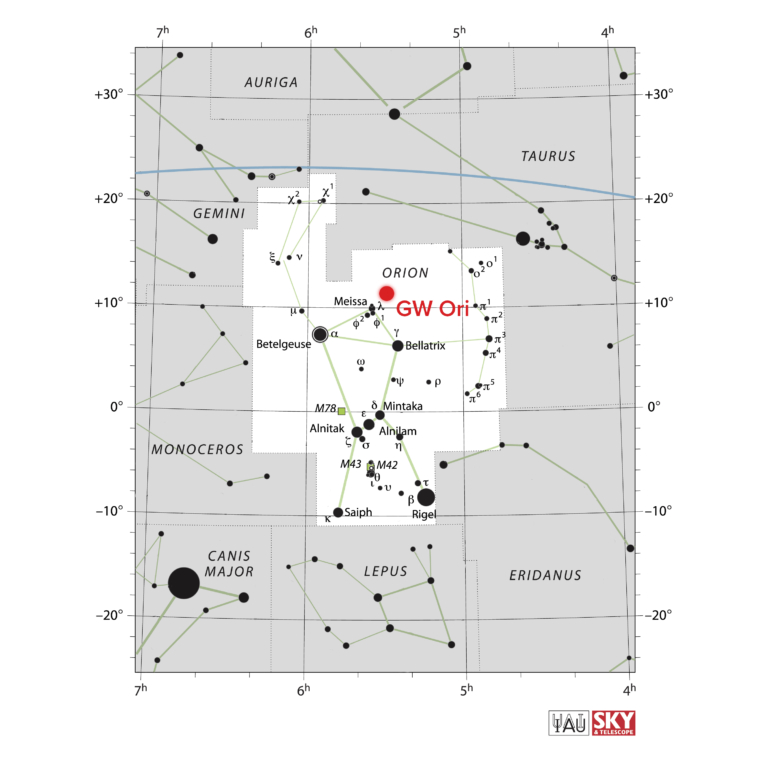 GW Orionis in the constellation of Orion 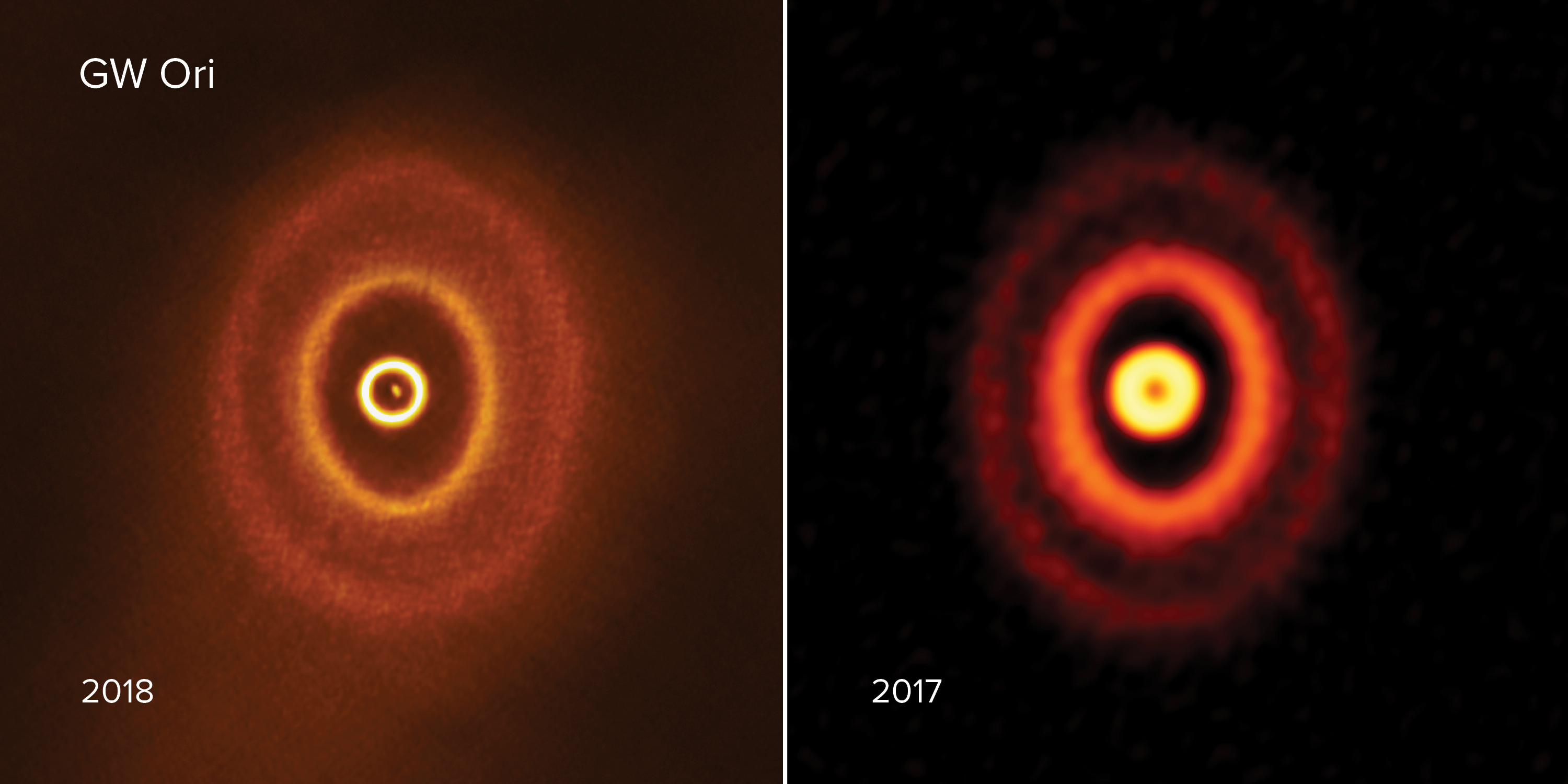 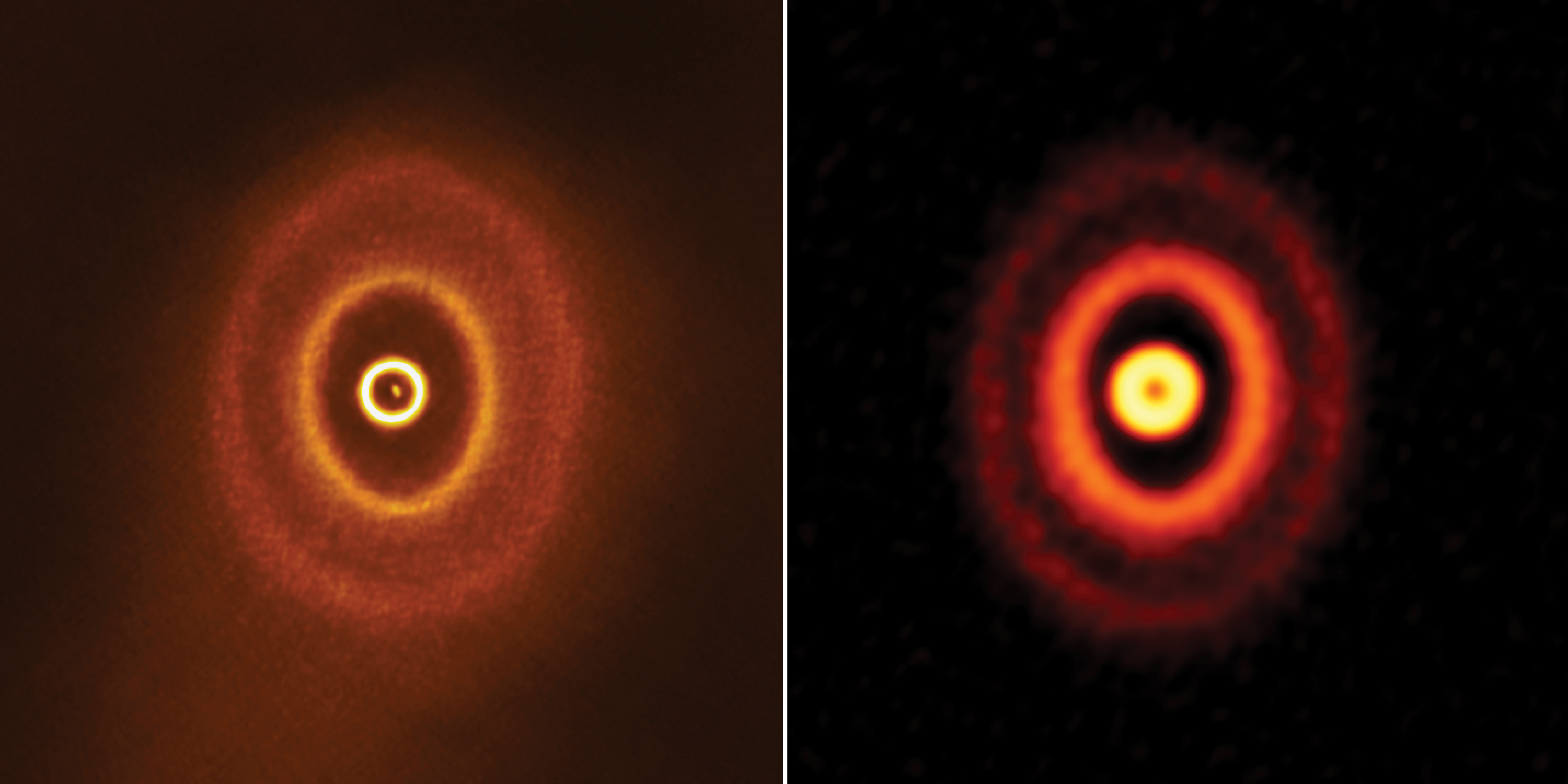 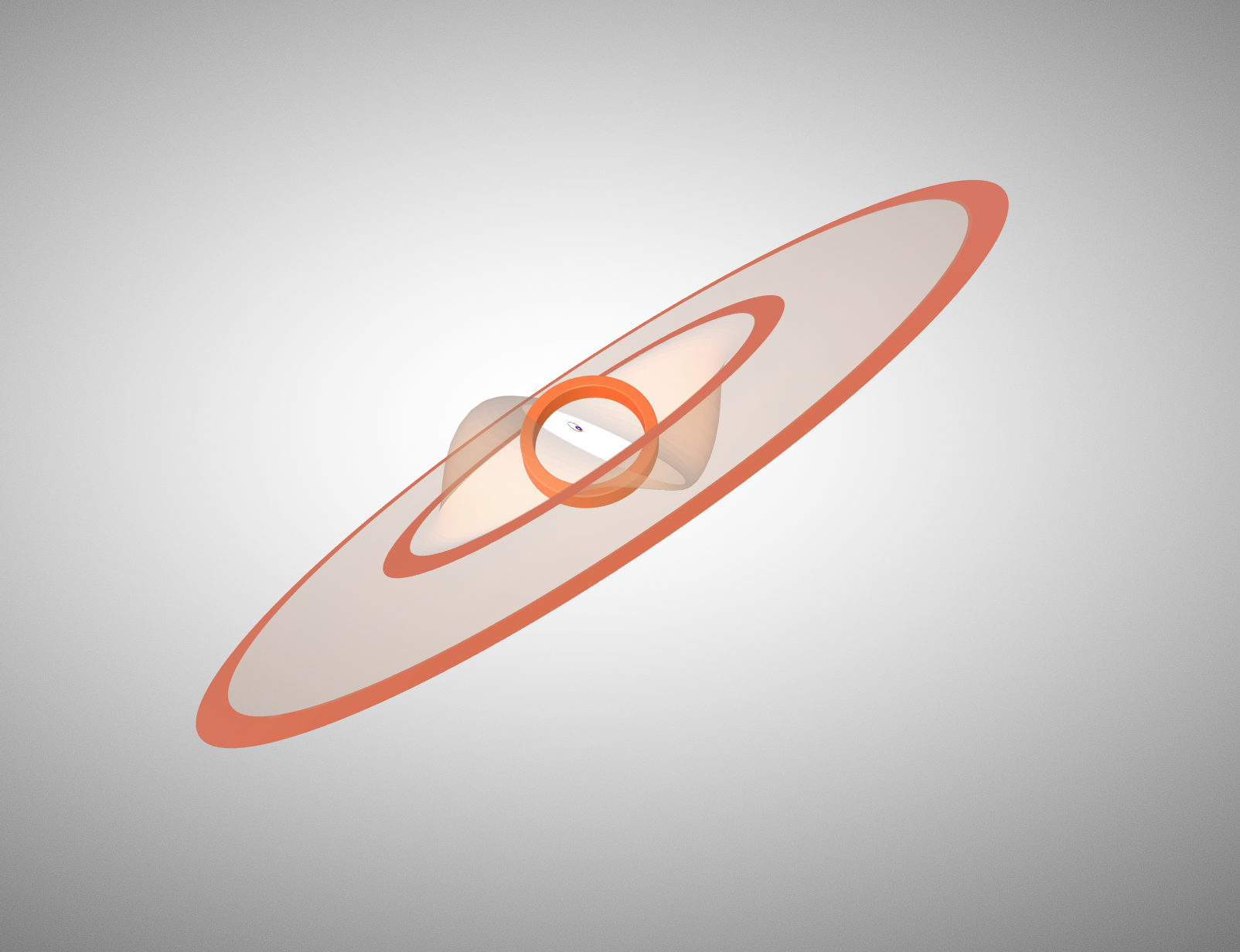 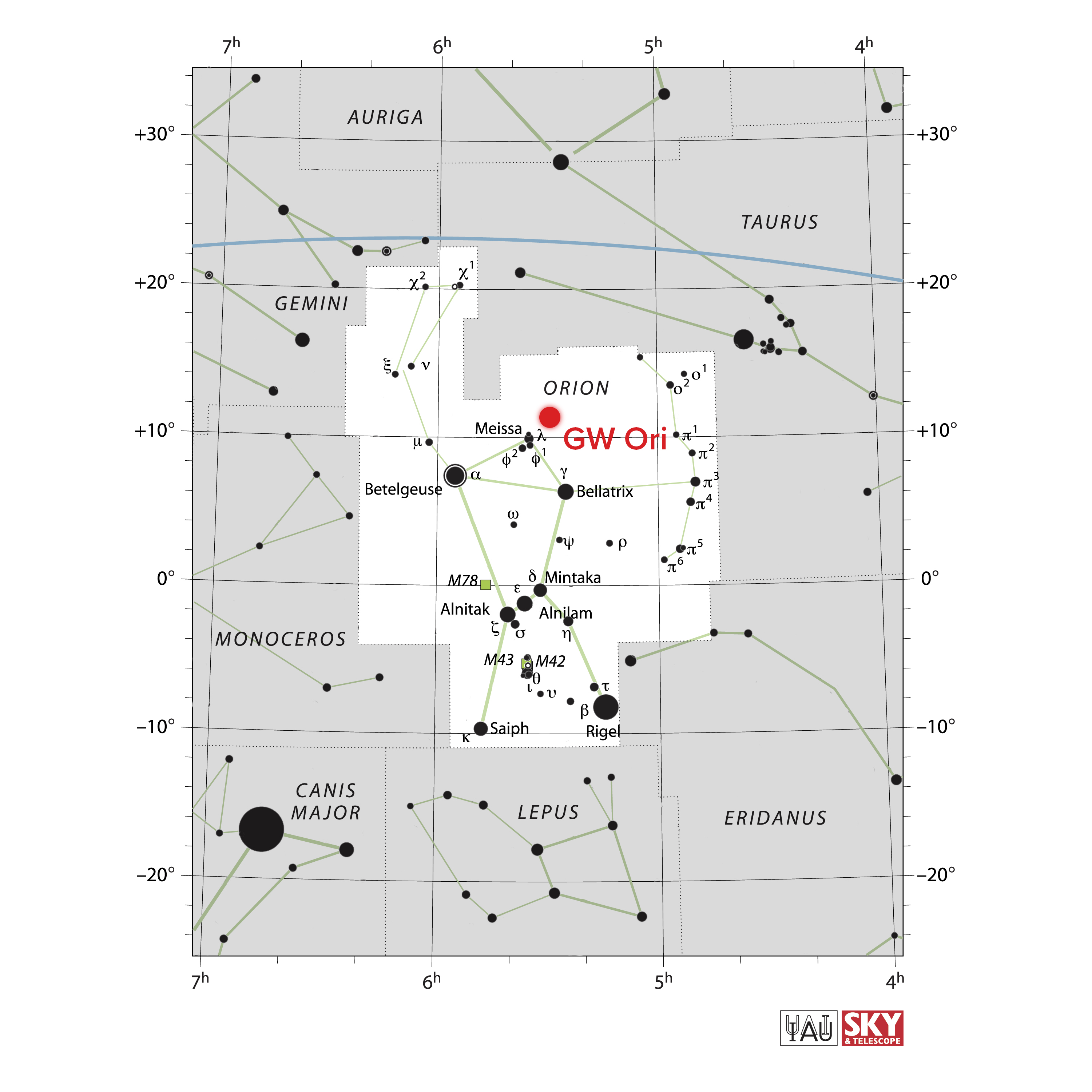