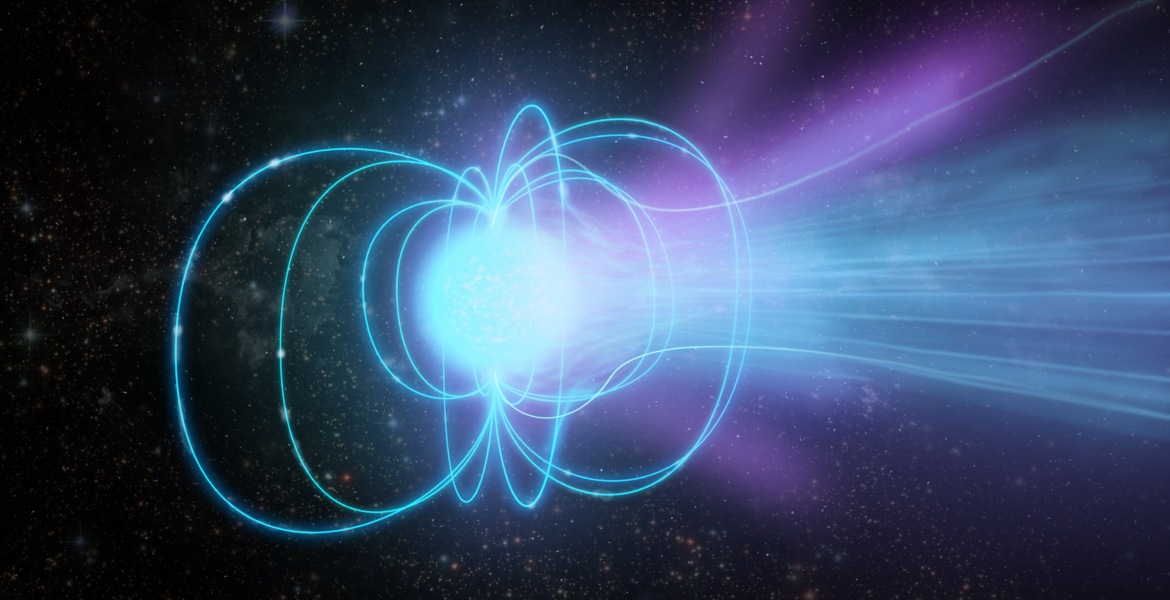 Astronomers using the National Science Foundation’s Very Long Baseline Array (VLBA) have made the first direct geometric measurement of the distance to a magnetar within our Milky Way Galaxy — a measurement that could help determine if magnetars are the sources of the long-mysterious Fast Radio Bursts (FRBs).

Magnetars are a variety of neutron stars — the superdense remains of massive stars that exploded as supernovae — with extremely strong magnetic fields. A typical magnetar magnetic field is a trillion times stronger than the Earth’s magnetic field, making magnetars the most magnetic objects in the Universe. They can emit strong bursts of X-rays and gamma rays, and recently have become a leading candidate for the sources of FRBs.

A team of astronomers used the VLBA to regularly observe XTE J1810-197 from January to November of 2019, then again during March and April of 2020. By viewing the magnetar from opposite sides of the Earth’s orbit around the Sun, they were able to detect a slight shift in its apparent position with respect to background objects much more distant. This effect, called parallax, allows astronomers to use geometry to directly calculate the object’s distance.

“This is the first parallax measurement for a magnetar, and shows that it is among the closest magnetars known — at about 8100 light-years — making it a prime target for future study,” said Hao Ding, a graduate student at the Swinburne University of Technology in Australia.

On April 28, a different magnetar, called SGR 1935+2154, emitted a brief radio burst that was the strongest ever recorded from within the Milky Way. While not as strong as FRBs coming from other galaxies, this burst suggested to astronomers that magnetars could generate FRBs.

Fast radio bursts were first discovered in 2007. They are very energetic, and last at most a few milliseconds. Most have come from outside the Milky Way. Their origin remains unknown, but their characteristics have indicated that the extreme environment of a magnetar could generate them.

“Having a precise distance to this magnetar means that we can accurately calculate the strength of the radio pulses coming from it. If it emits something similar to an FRB, we will know how strong that pulse is,” said Adam Deller, also of Swinburne University. “FRBs vary in their strength, so we would like to know if a magnetar pulse comes close or overlaps with the strength of known FRBs,” he added.

“A key to answering this question will be to get more distances to magnetars, so we can expand our sample and obtain more data. The VLBA is the ideal tool for doing this,” said Walter Brisken, of the National Radio Astronomy Observatory.

In addition, “We know that pulsars, such as the one in the famous Crab Nebula, emit ‘giant pulses,’ much stronger than their usual ones. Determining the distances to magnetars will help us understand this phenomenon, and learn if maybe FRBs are the most extreme example of giant pulses,” Ding said.

The ultimate goal is to determine the exact mechanism that produces FRBs, the scientists said.

Ding, Deller, Brisken, and their colleagues reported their results in the Monthly Notices of the Royal Astronomical Society. 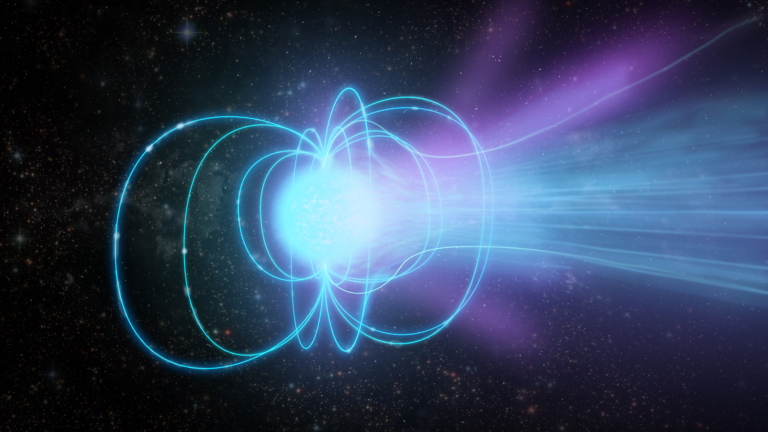 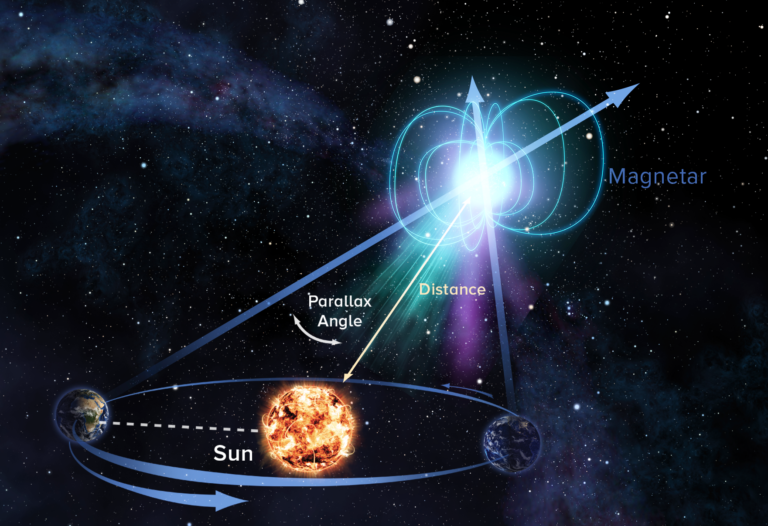 By observing an object from opposite sides of the Earth's orbit around the Sun, as...Read More
Credit: Sophia Dagnello, NRAO/AUI/NSF 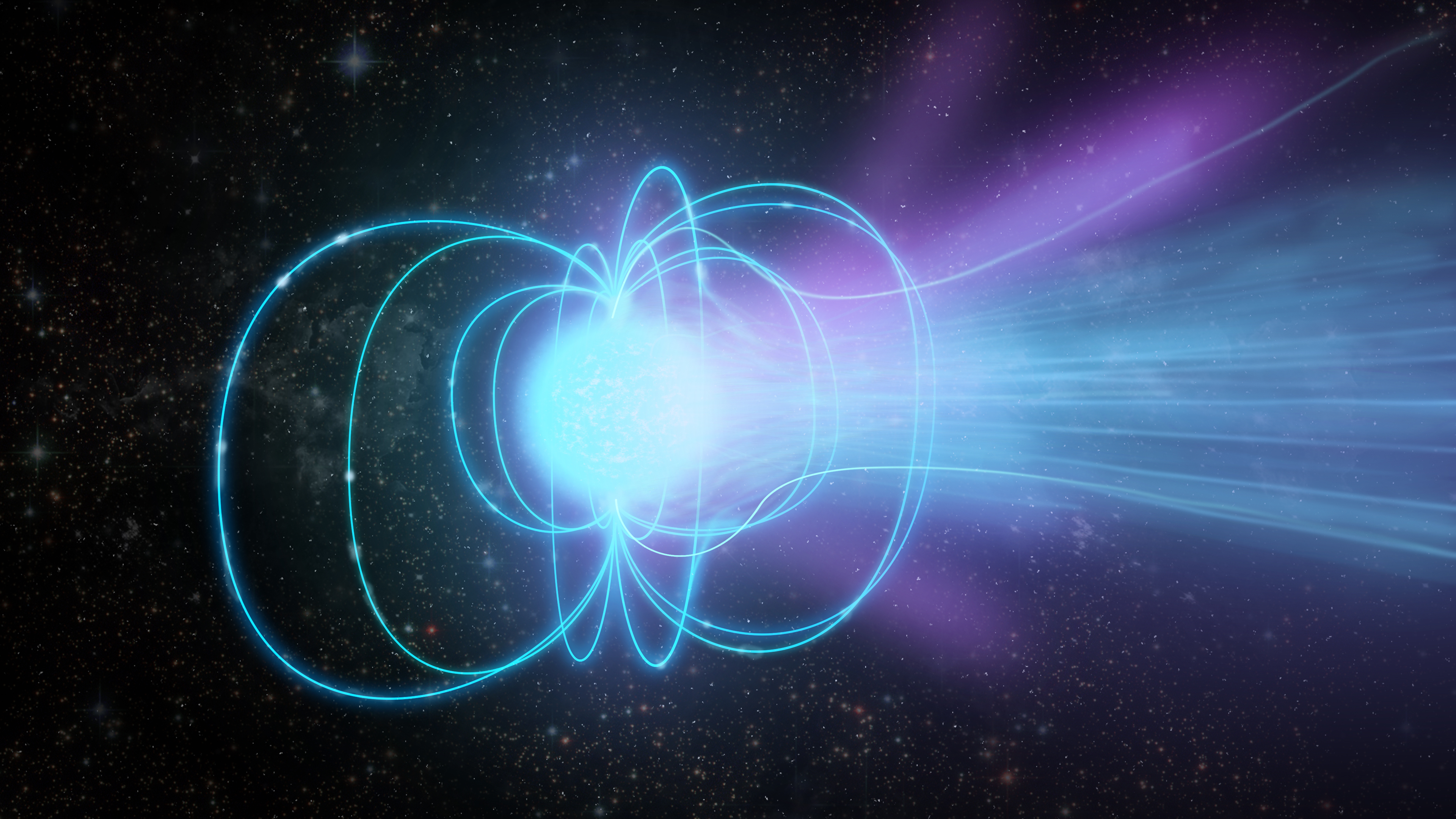 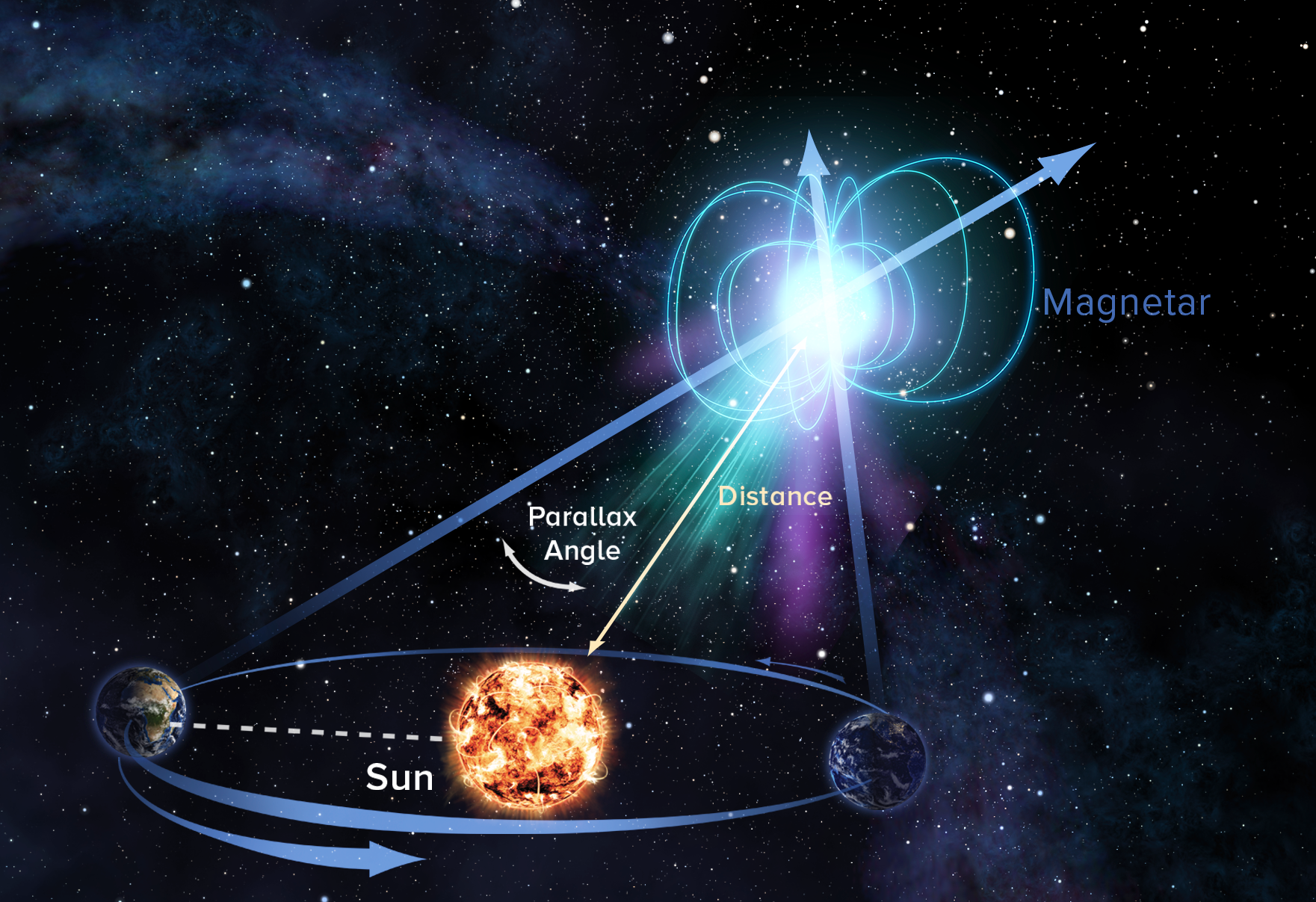