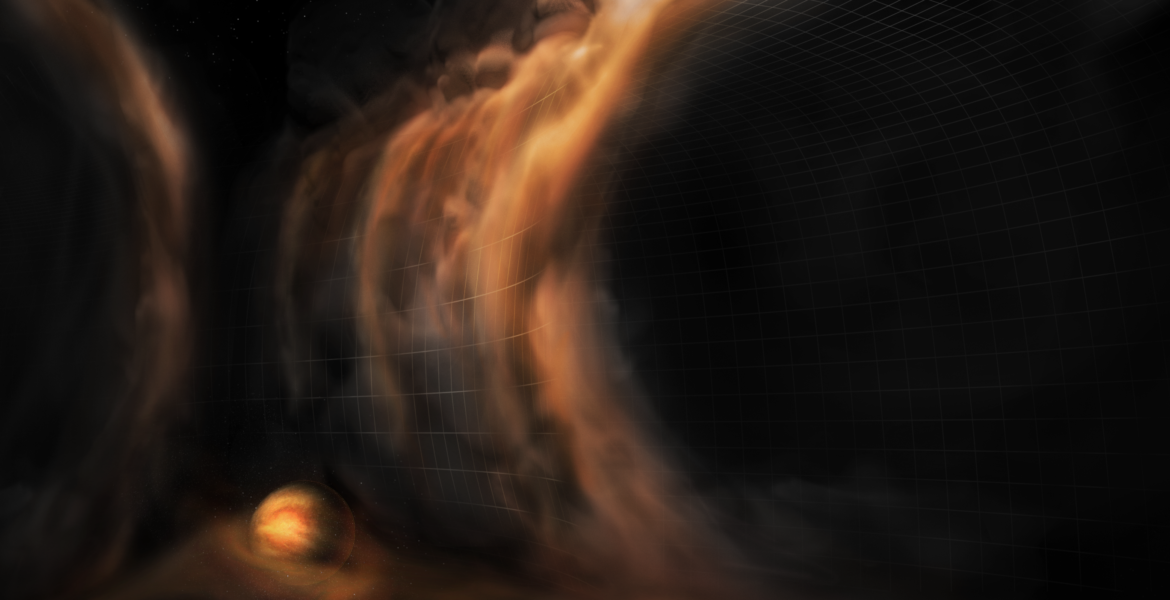 Synopsis: For the first time, astronomers using ALMA have witnessed 3D motions of gas in a planet-forming disk. At three locations in the disk around a young star called HD 163296, gas is flowing like a waterfall into gaps that are most likely caused by planets in formation. These gas flows have long been predicted and would directly influence the chemical composition of planet atmospheres. This research is published in the latest issue of the journal Nature.

The birthplaces of planets are disks made out of gas and dust. Astronomers study these so-called protoplanetary disksProtoplanetary DiskThe swirling disk of dust and gas that collapsed from a much larger cloud of material that will eventually evolve into a fully fledged planetary system. Features in the disk may already herald the presence of young planets. to understand the processes of planet formation. Beautiful images of disks made with the Atacama Large Millimeter/submillimeter Array (ALMA)Atacama Large Millimeter/submillimeter Array (ALMA)Funded by the U.S. National Science Foundation and its international partners (NRAO/ESO/NAOJ), ALMA is among the most complex and powerful astronomical observatories on Earth or in space. The telescope is an array of 66 high-precision dish antennas in northern Chile. show distinct gaps and ring features in dust, which may be caused by infant planets.

To get more certainty that these gaps are actually caused by planets, and to get a more complete view of planet formation, scientists study the gas in the disks in addition to dust. 99 percent of a protoplanetary disk’s mass is gas, of which carbon monoxide (CO) gas is the brightest component, emitting at a very distinctive millimeter-wavelength light that ALMA can observe.

Last year, two teams of astronomers demonstrated a new planet-hunting technique using this gas. They measured the velocity of CO gas rotating in the disk around the young star HD 163296. Localized disturbances in the movements of the gas revealed three planet-like patterns in the disk.

In this new study, lead author Richard Teague from the University of Michigan and his team used new high-resolution ALMA data from the Disk Substructures at High Angular Resolution Project (DSHARP) to study the gas’s velocity in more detail. “With the high fidelity data from this program, we were able to measure the gas’s velocity in three directions instead of just one,” said Teague. “For the first time, we measured the motion of the gas rotating around the star, towards or away from the star, and up- or downwards in the disk.”

Teague and his colleagues saw the gas moving from the upper layers towards the middle of the disk at three different locations. “What most likely happens is that a planet in orbit around the star pushes the gas and dust aside, opening a gap,” Teague explained. “The gas above the gap then collapses into it like a waterfall, causing a rotational flow of gas in the disk.”

This is the best evidence to date that there are indeed planets being formed around HD 163296. But astronomers cannot say with one hundred percent certainty that the gas flows are caused by planets. For example, the star’s magnetic field could also cause disturbances in the gas. “Right now, only a direct observation of the planets could rule out the other options. But the patterns of these gas flows are unique and it is very likely that they can only be caused by planets,” said co-author Jaehan Bae of the Carnegie Institution for Science, who tested this theory with a computer simulation of the disk.

The location of the three predicted planets in this study correspond to the results from last year: they are likely located at 87, 140 and 237 AU. (An astronomical unit – AU – is the average distance from the Earth to the Sun.) The closest planet to HD 163296 is calculated to be half the mass of Jupiter, the middle planet is Jupiter-mass, and the farthest planet is twice as massive as Jupiter.

Gas flows from the surface towards the midplane of the protoplanetary disk have been predicted by theoretical models to exist since the late ‘90s, but this is the first time that they have been observed. Not only can they be used to detect infant planets, they also shape our understanding of how gas giant planets obtain their atmospheres.

“Planets form in the middle layer of the disk, the so-called midplane. This is a cold place, shielded from radiation from the star,” Teague explained. “We think that the gaps caused by planets bring in warmer gas from the more chemically active outer layers of the disk, and that this gas will form the atmosphere of the planet.”

Teague and his team did not expect that they would be able to see this phenomenon. “The disk around HD 163296 is the brightest and biggest disk we can see with ALMA,” said Teague. “But it was a big surprise to actually see these gas flows so clearly. The disks appears to be much more dynamic than we thought.”

“This gives us a much more complete picture of planet formation than we ever dreamed,” said co-author Ted Bergin of the University of Michigan. “By characterizing these flows we can determine how planets like Jupiter are born and characterize their chemical composition at birth. We might be able to use this to trace the birth location of these planets, as they can move during formation.” 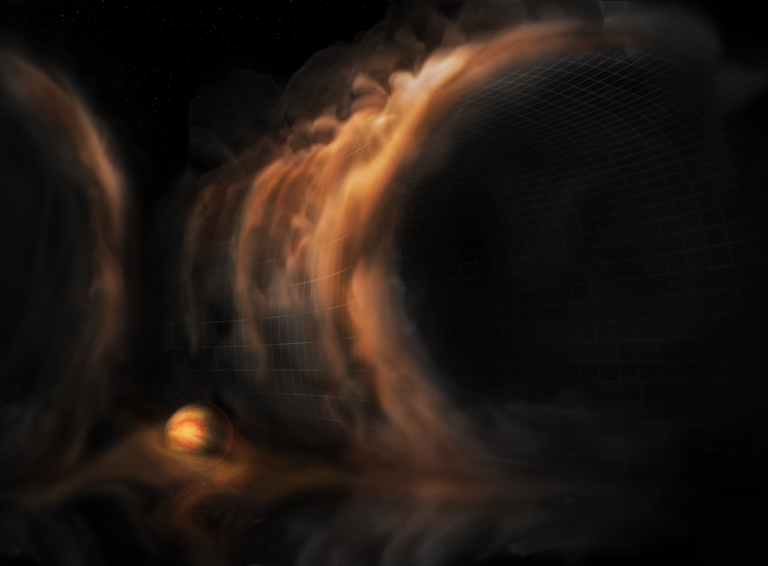 Artist impression of gas flowing like a waterfall into a protoplanetary disk gap, which is...Read More
Credit: NRAO/AUI/NSF, S. Dagnello 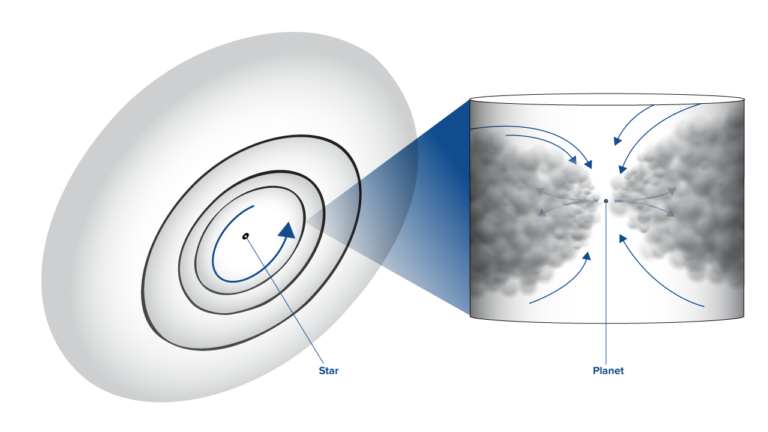 Scientists measured the motion of gas (arrows) in a protoplanetary disk in three directions: rotating...Read More
Credit: NRAO/AUI/NSF, B. Saxton 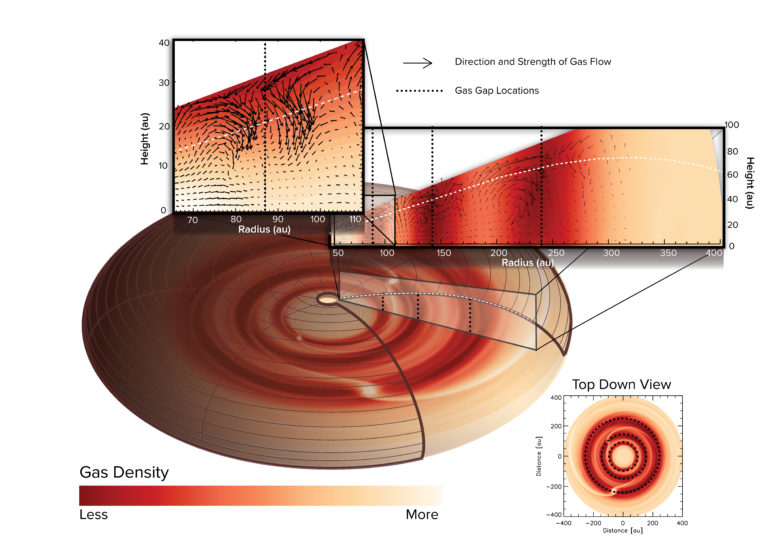 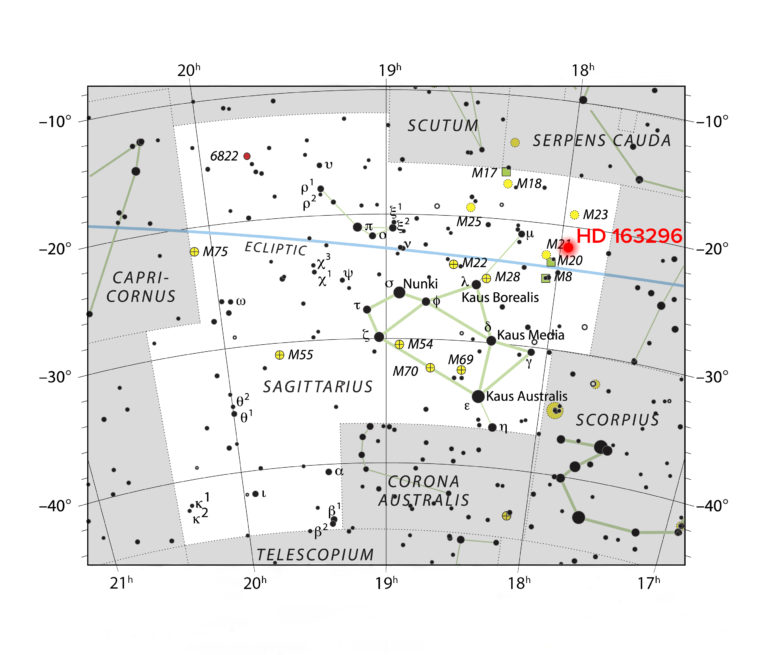 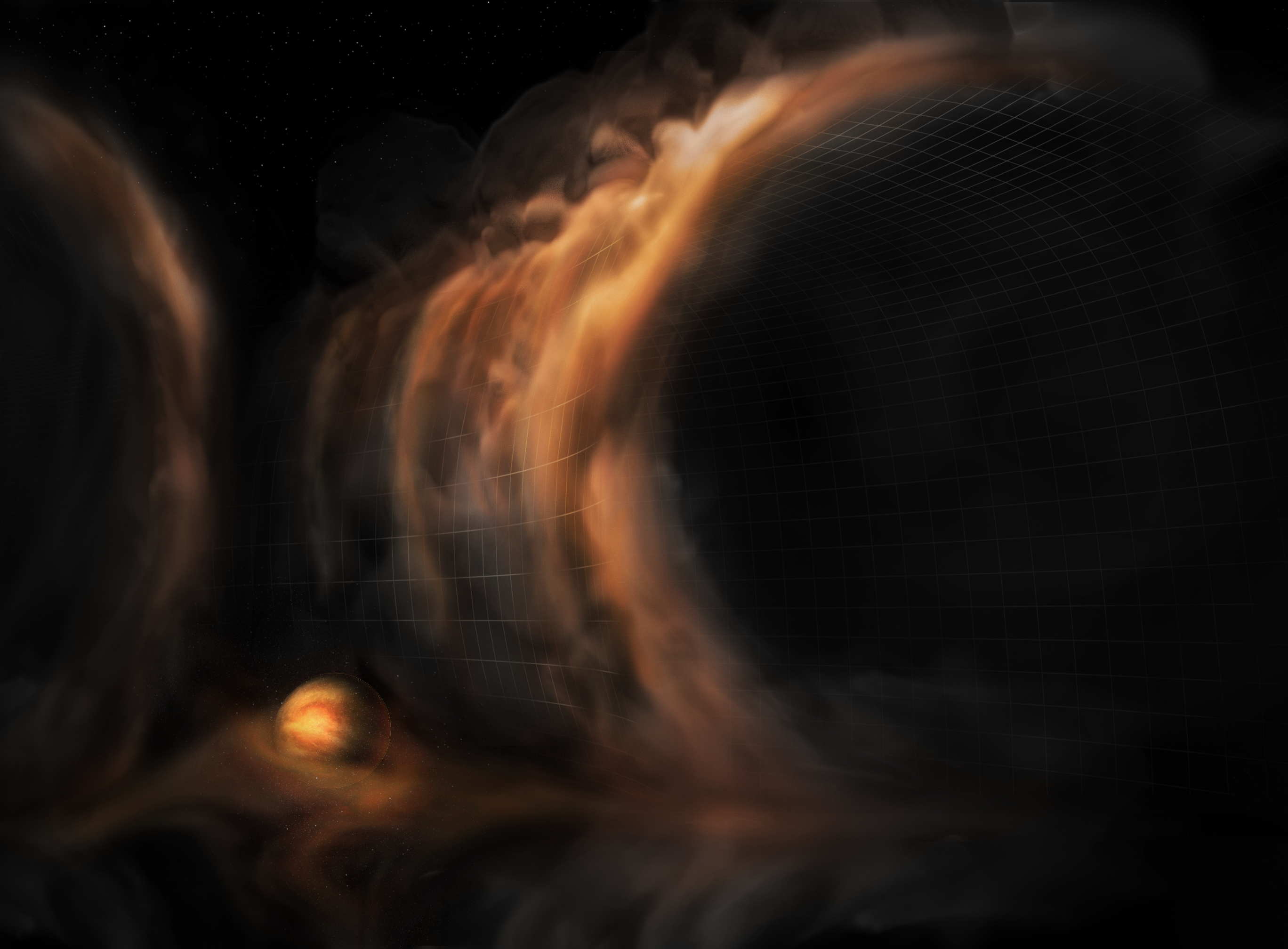 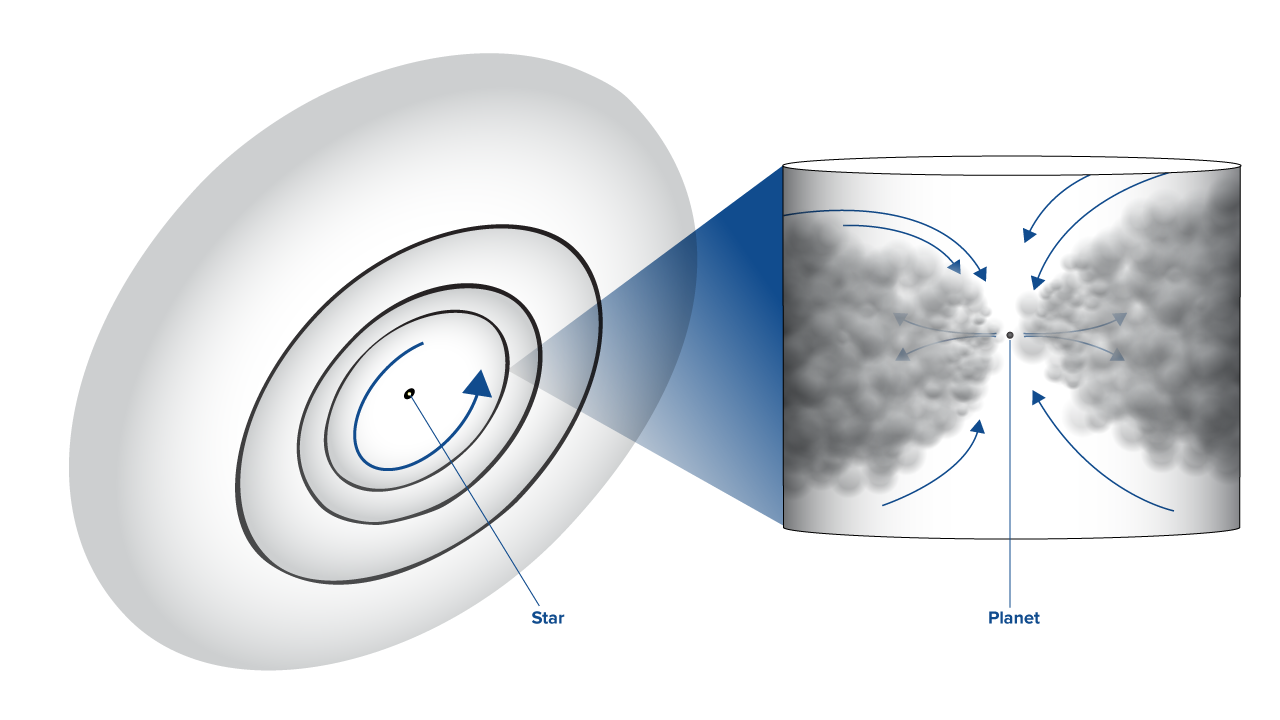 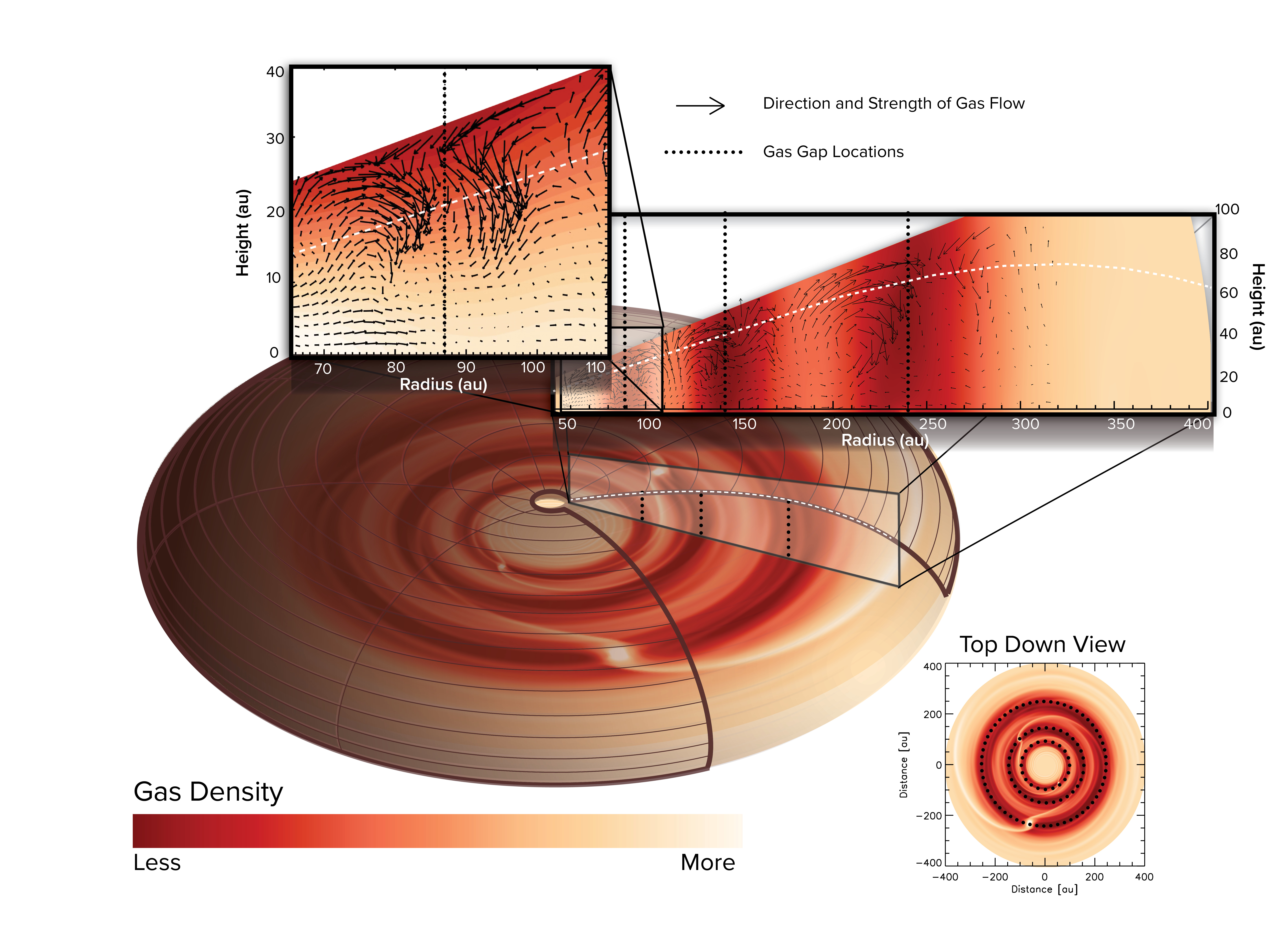 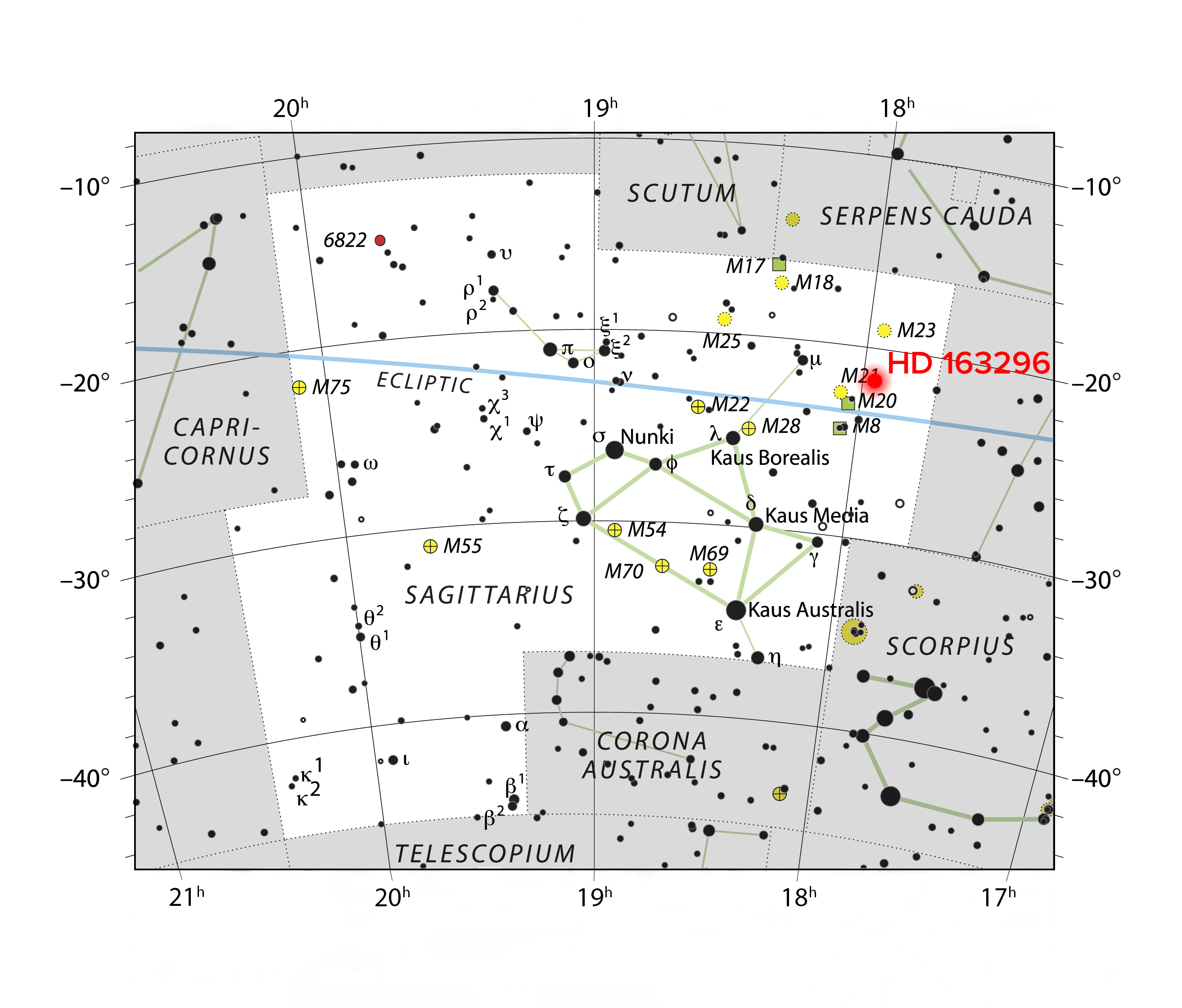