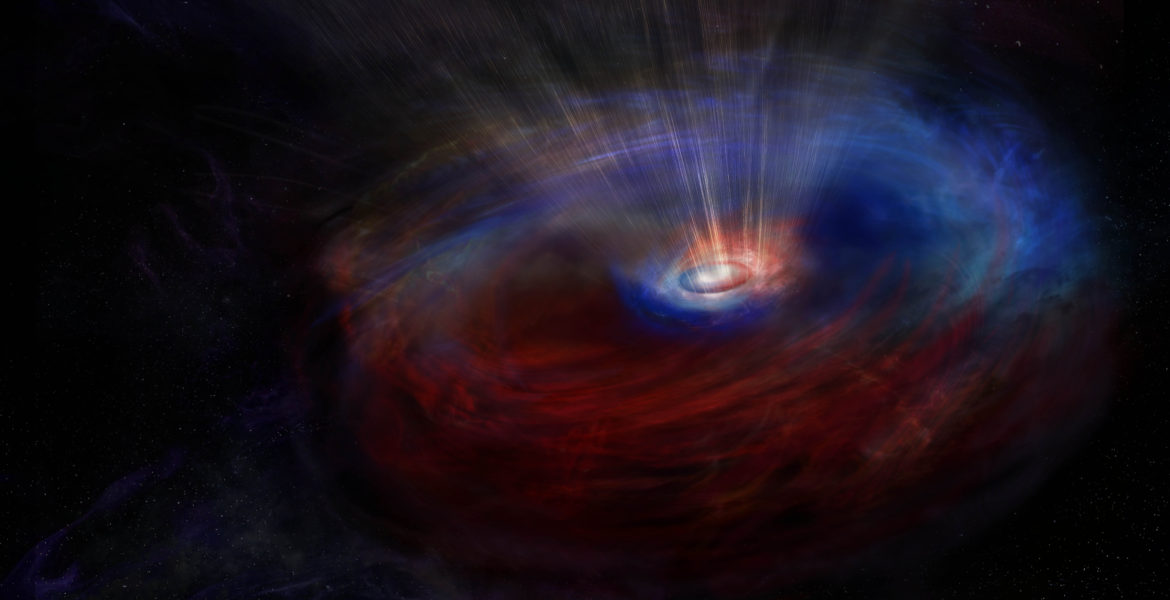 At the center of a galaxy called NGC 1068, a supermassive black hole hides within a thick doughnut-shaped cloud of dust and gas. When astronomers used the Atacama Large Millimeter/submillimeter Array (ALMA)Atacama Large Millimeter/submillimeter Array (ALMA)Funded by the U.S. National Science Foundation and its international partners (NRAO/ESO/NAOJ), ALMA is among the most complex and powerful astronomical observatories on Earth or in space. The telescope is an array of 66 high-precision dish antennas in northern Chile. to study this cloud in more detail, they made an unexpected discovery that could explain why supermassive black holes grew so rapidly in the early Universe.

“Thanks to the spectacular resolution of ALMA, we measured the movement of gas in the inner orbits around the black hole,” explains Violette Impellizzeri of the National Radio Astronomy Observatory (NRAO), working at ALMA in Chile and lead author on a paper published in the Astrophysical Journal. “Surprisingly, we found two disks of gas rotating in opposite directions.”

Supermassive black holes already existed when the Universe was young – just a billion years after the Big Bang. But how these extreme objects, whose masses are up to billions of times the mass of the Sun, had time to grow in such a relatively short timespan, is an outstanding question among astronomers. This new ALMA discovery could provide a clue. “Counter-rotating gas streams are unstable, which means that clouds fall into the black hole faster than they do in a disk with a single rotation direction,” said Impellizzeri. “This could be a way in which a black hole can grow rapidly.”

NGC 1068 (also known as Messier 77) is a spiral galaxy approximately 47 million light-years from Earth in the direction of the constellation Cetus. At its center is an active galactic nucleus, a supermassive black hole that is actively feeding itself from a thin, rotating disk of gas and dust, also known as an accretion disk.

Previous ALMA observations revealed that the black hole is not only gulping down material, but also spewing out gas at incredibly high speeds – up to 500 kilometers per second (more than one million miles per hour). This gas that gets expelled from the accretion disk likely contributes to hiding the region around the black hole from optical telescopes.

Impellizzeri and her team used ALMA’s superior zoom lens ability to observe the molecular gas around the black hole. Unexpectedly, they found two counter-rotating disks of gas. The inner disk spans 2-4 light-years and follows the rotation of the galaxy, whereas the outer disk (also known as the torus) spans 4-22 light-years and is rotating the opposite way.

“We did not expect to see this, because gas falling into a black hole would normally spin around it in only one direction,” said Impellizzeri. “Something must have disturbed the flow, because it is impossible for a part of the disk to start rotating backward all on its own.”

Counter-rotation is not an unusual phenomenon in space. “We see it in galaxies, usually thousands of light-years away from their galactic centers,” explained co-author Jack Gallimore from Bucknell University in Lewisburg, Pennsylvania. “The counter-rotation always results from the collision or interaction between two galaxies. What makes this result remarkable is that we see it on a much smaller scale, tens of light-years instead of thousands from the central black hole.”

The astronomers think that the backward flow in NGC 1068 might be caused by gas clouds that fell out of the host galaxy, or by a small passing galaxy on a counter-rotating orbit captured in the disk.

At the moment, the outer disk appears to be in a stable orbit around the inner disk. “That will change when the outer disk begins to fall onto the inner disk, which may happen after a few orbits or a few hundred thousand years. The rotating streams of gas will collide and become unstable, and the disks will likely collapse in a luminous event as the molecular gas falls into the black hole. Unfortunately, we will not be there to witness the fireworks,” said Gallimore. 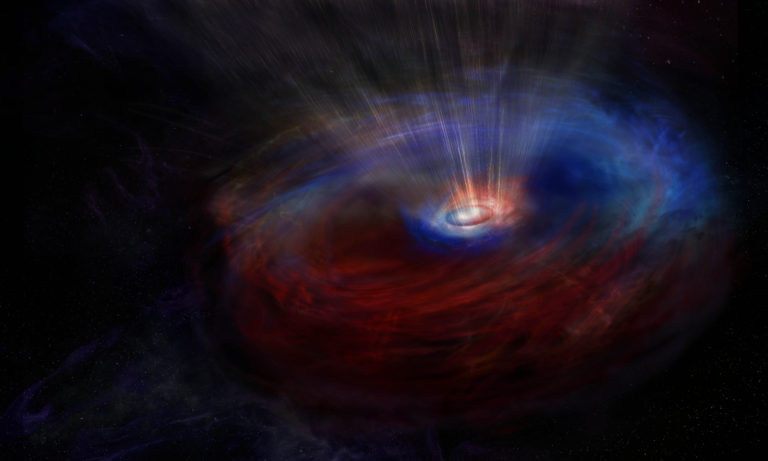 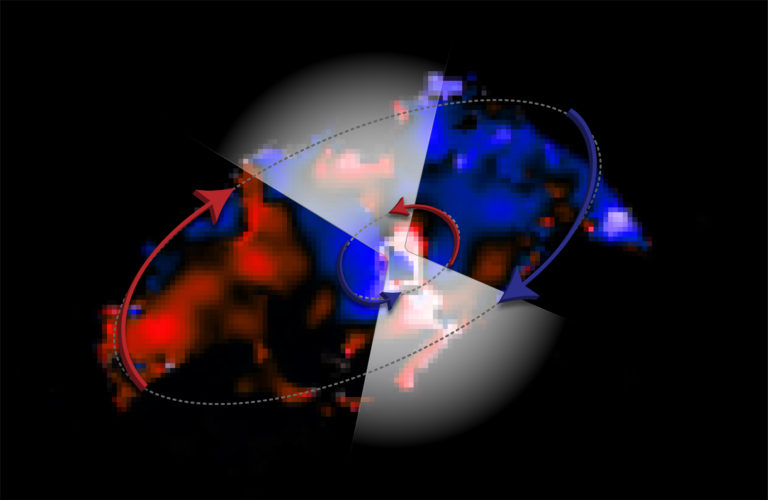 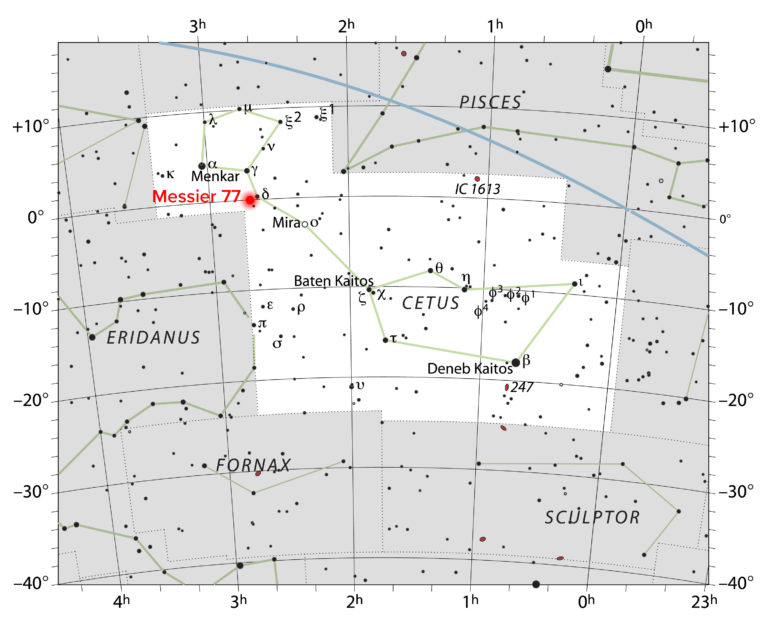 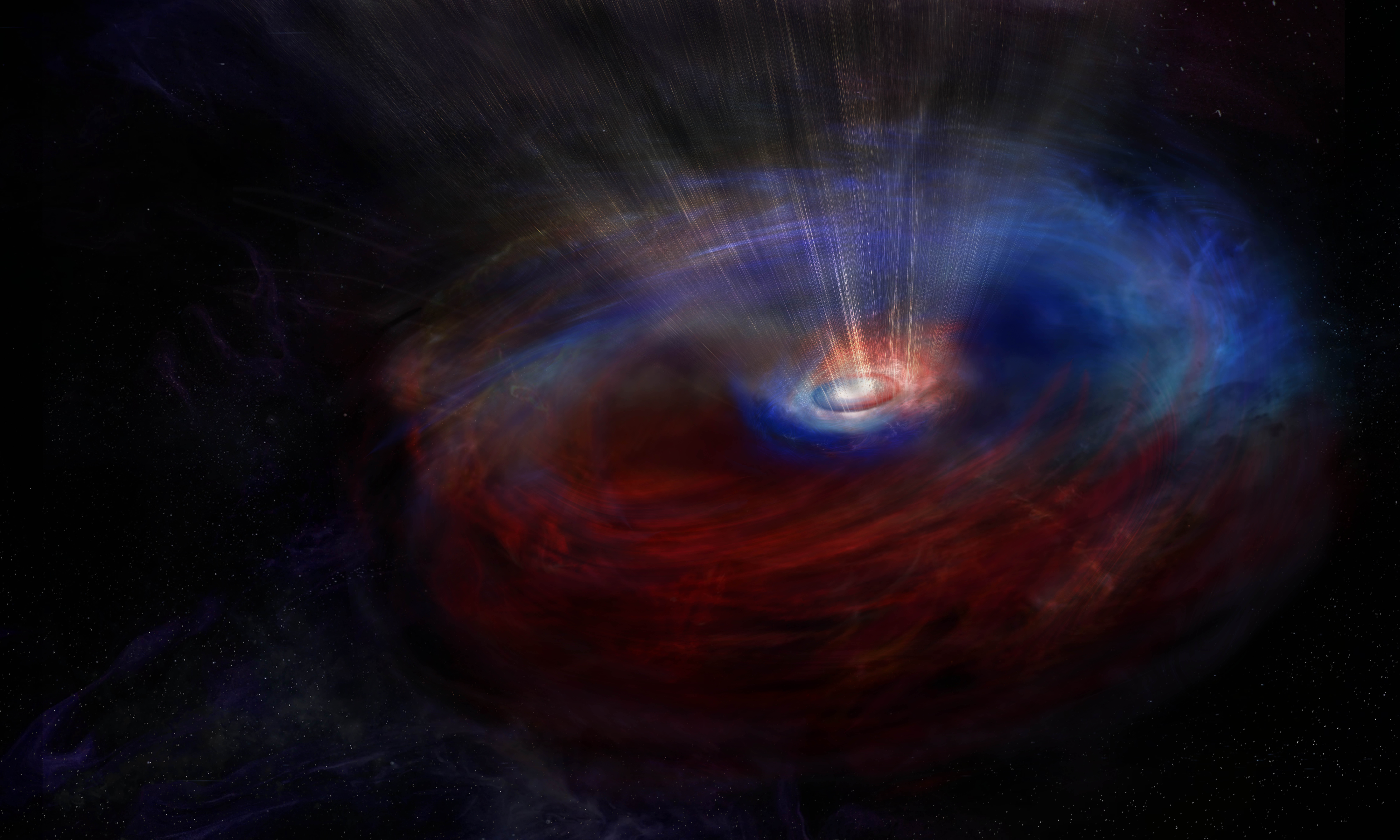 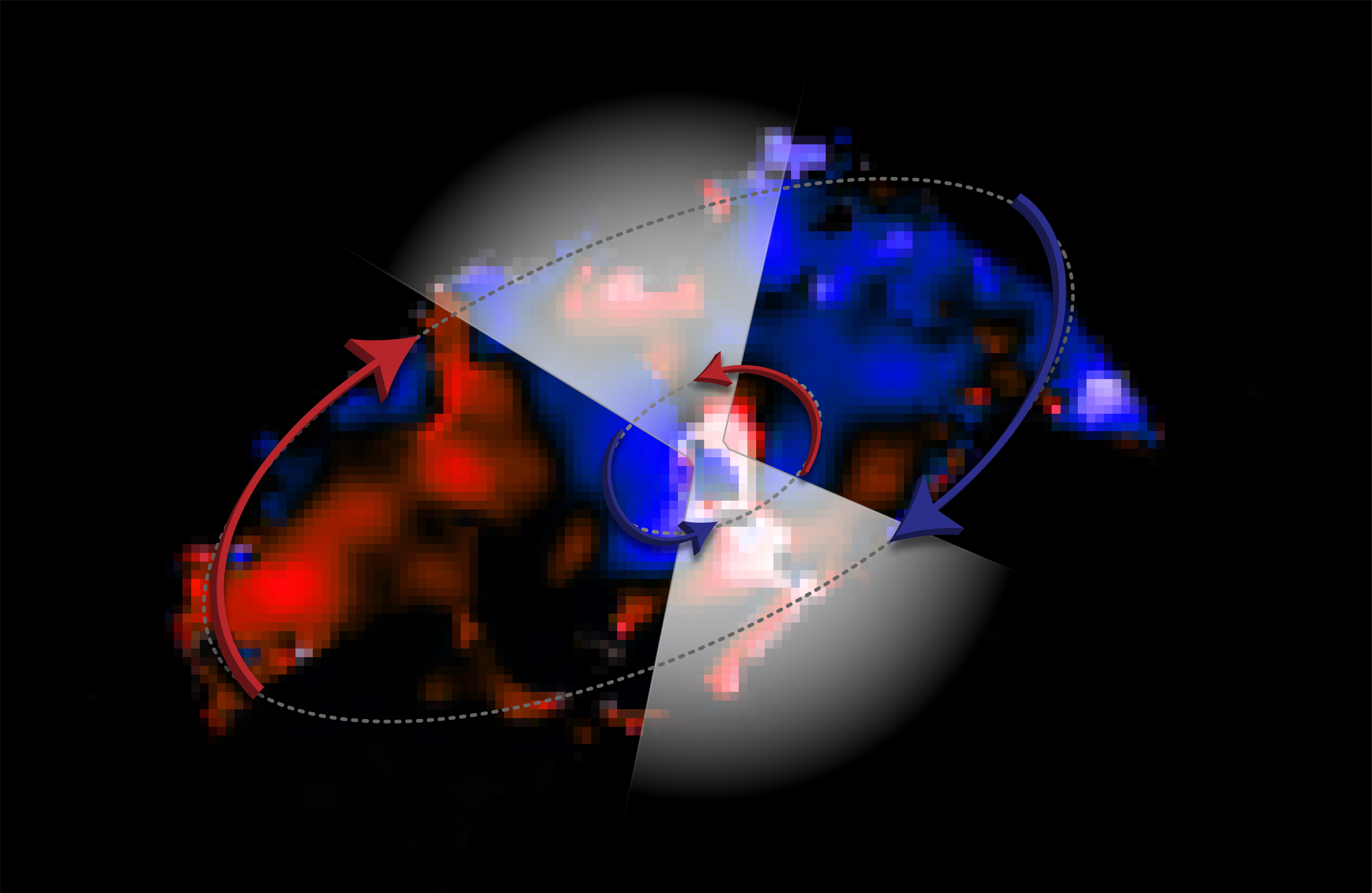 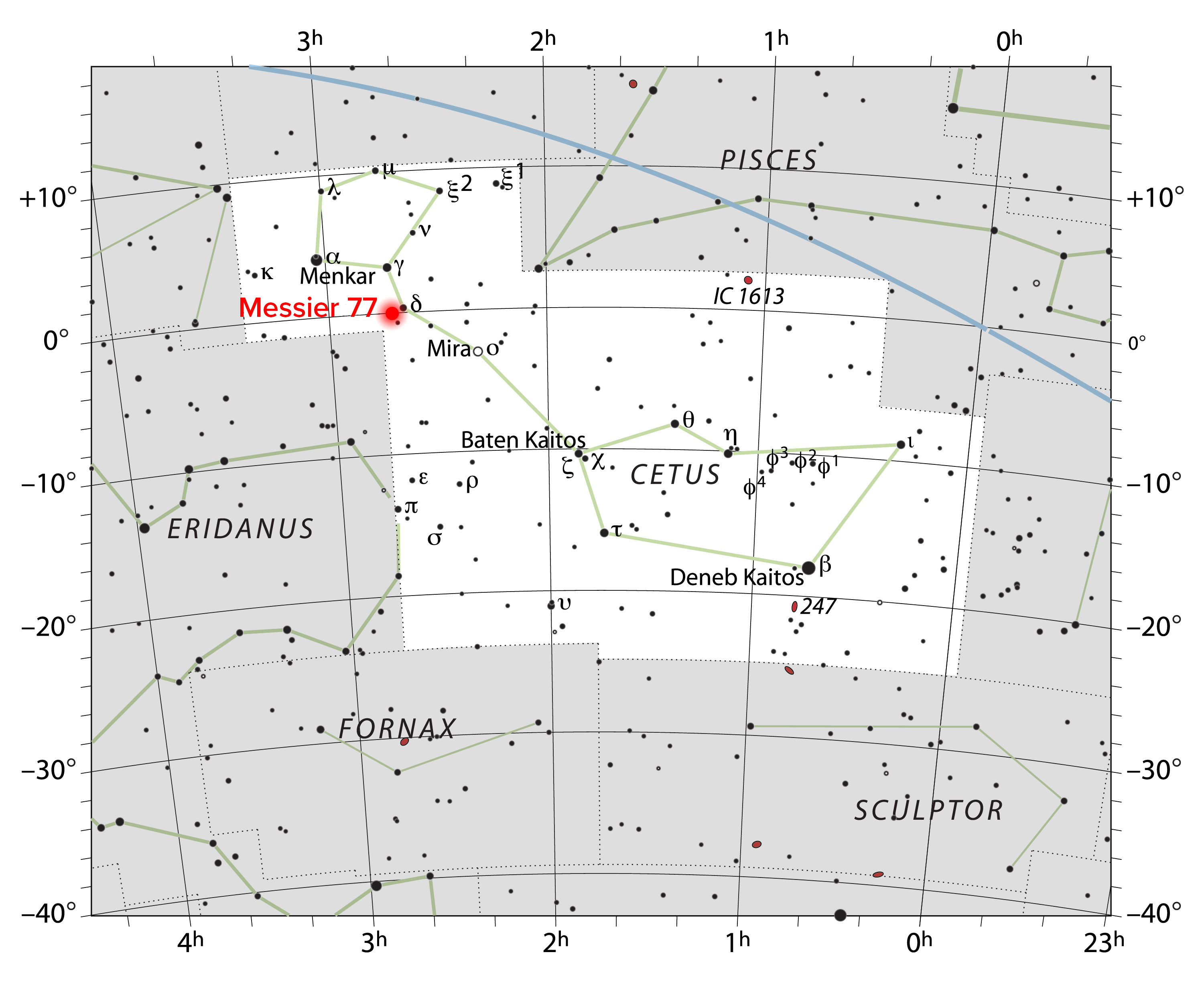