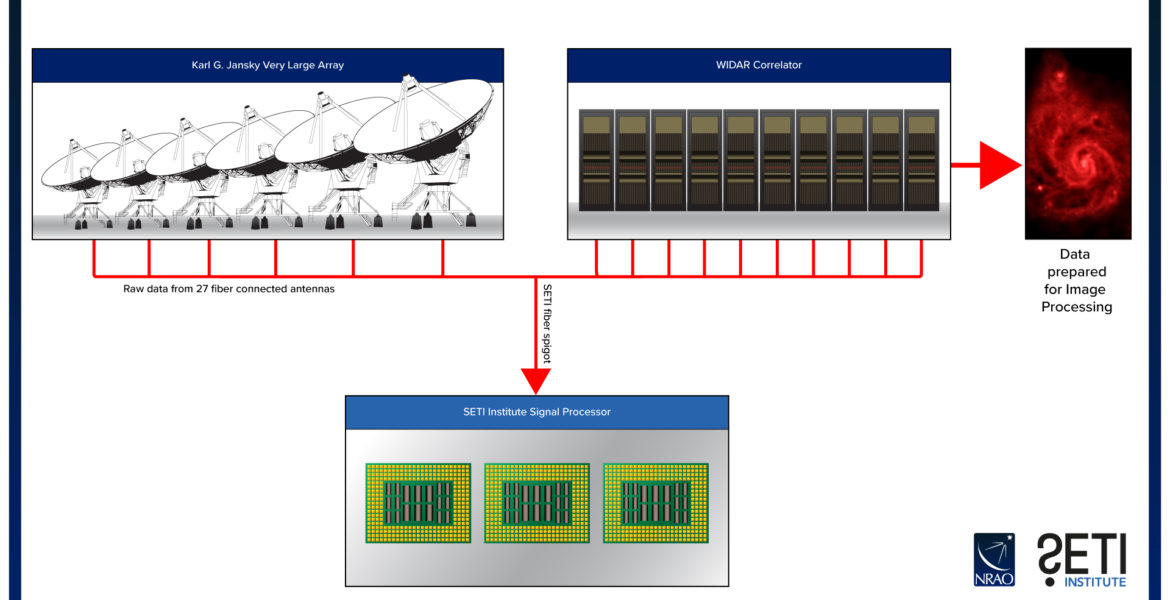 The National Radio Astronomy Observatory (NRAO) and the SETI Institute have agreed to collaborate on a broad range of future scientific and technical projects in radio astronomy and related research. Initial efforts under the agreement will be focused on developing capabilities for the Search for Extraterrestrial Intelligence (SETI) on radio telescopes operated by NRAO.

The two organizations will collaborate to develop and install a signal processing system on the National Science Foundation’s Karl G. Jansky Very Large Array (VLA) that will analyze data collected by that telescope to identify transmissions possibly generated by extraterrestrial technologies. This system — dubbed COSMIC: the Commensal Open Source Multimode Interferometer Cluster — will receive data from a newly-developed parallel Ethernet interface to the VLA, using the same data stream used for other research but analyzed in parallel by COSMIC.

“This plan will allow an additional, important use for the data we’re already collecting,” said NRAO Director Tony Beasley. “In addition to addressing one of the most profound questions in science, this system also may advance our capabilities in other areas of science, such as detecting Fast Radio Bursts, as well as produce improvements in detecting and excising radio interference from our observations,” Beasley added.

The first step in realizing the new system will be to develop and install a wide-bandwidth Ethernet interface to the VLA’s current signal distribution system. This first phase of the project has been funded by John and Carol Giannandrea. John Giannandrea is a Trustee of the SETI Institute.

Dr. Jack Hickish, of the SETI Institute and Real-Time Radio Systems Limited, who is leading development of the COSMIC system, said, “When the VLA digital instrumentation was originally conceived, the idea that astronomers could be provided with access to every bit of the data flowing through the system was laughable. An enormous amount of design expertise and engineering went into building custom hardware to reduce terabits-per-second of data to a rate which scientists could analyze effectively. Once the COSMIC interface is complete, the door will open to perform essentially arbitrary types of signal analysis, helping to further cement the VLA’s history as one of the world’s most productive, powerful, and versatile radio telescopes.”

The SETI Institute is a privately-funded, nonprofit research institute. Headquartered in Mountain View, California, it focuses on investigations into the origin, evolution, and distribution of life in the Universe. It was founded in 1984, and operates the Allen Telescope Array, the only research-class radio astronomy facility purpose-built to search for intelligent life, as well as conduct radio astronomy research.

The NRAO is a federally-funded research facility of the National Science Foundation (NSF), and is operated by Associated Universities, Inc. NRAO operates the VLA, the Very Long Baseline Array (VLBA), and is the North American executive for the Atacama Large Millimeter/submillimeter Array (ALMA) in Chile, on behalf of the NSF. The NRAO enables cutting-edge research in the study of the Universe at radio wavelengths, helps train future scientists and engineers, and stimulates public interest in science and astronomy.

The NRAO is developing the concept for a next-generation VLA (ngVLA), which would dramatically advance radio astronomy beyond current capabilities. The SETI Institute desires to engage as a technical and scientific partner in this project. Specifically, NRAO and the SETI Institute will begin discussions on how to design relevant ngVLA systems so that they will allow leading-edge SETI research on that advanced facility.

“Our observatory and the SETI Institute are both strongly committed to advancing science and technology, and we have many common interests in radio astronomy and related areas. This agreement, and the collaborations it will foster, will not only open new areas of research but also, we believe, help improve our technologies and make our telescopes more effective scientific tools,” Beasley said. 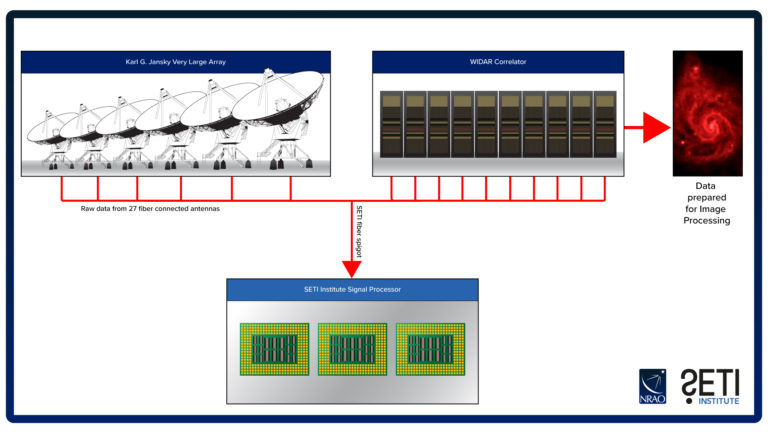 Data from the VLA's observations will be provided to a new signal-processing system built by...Read More
Credit: Bill Saxton, NRAO/AUI/NSF 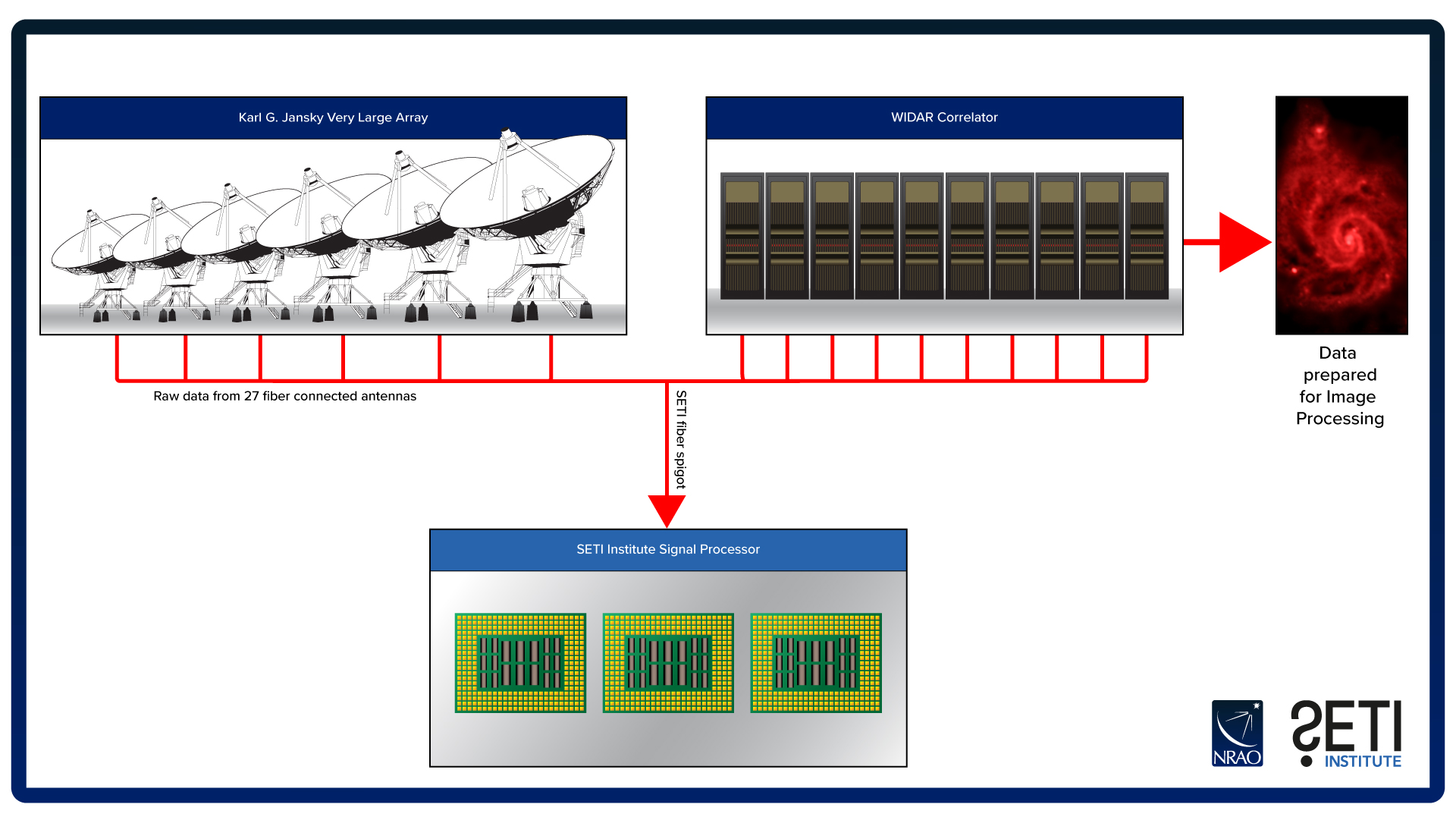