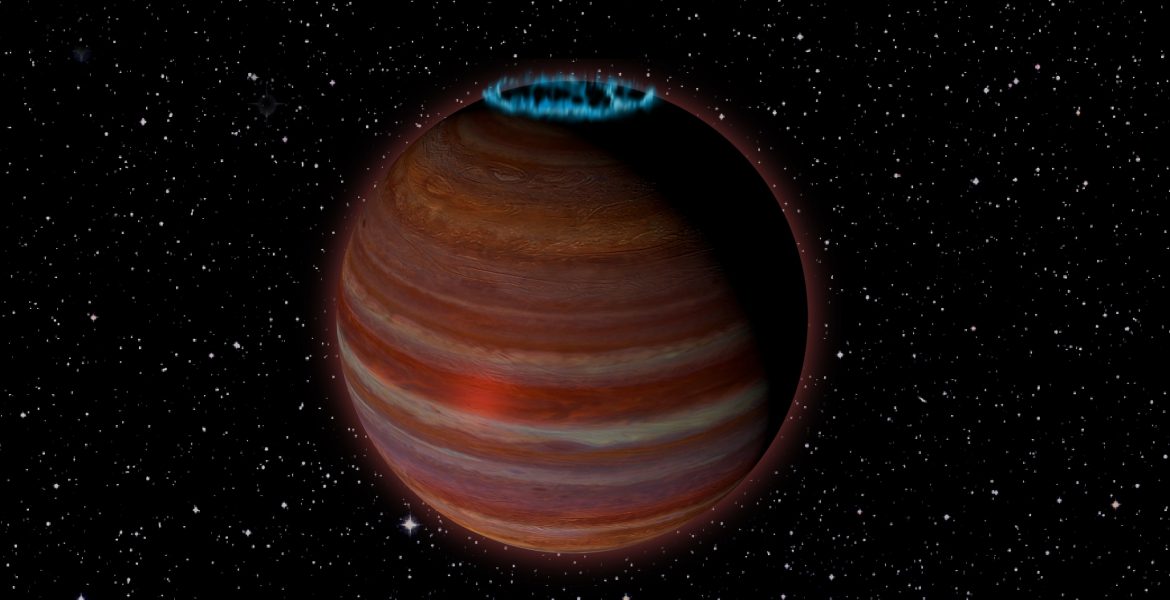 Astronomers using the National Science Foundation’s Karl G. Jansky Very Large ArrayVery Large ArrayThe Very Large Array is a customizable interferometer that varies between 2/3 of a mile to 22 miles long depending on the time of year. It is considered to be one of the most advanced radio telescope arrays on Earth with 28 antennas in Socorro, New Mexico. (VLA) have made the first radio-telescope detection of a planetary-mass object beyond our Solar System. The object, about a dozen times more massive than Jupiter, is a surprisingly strong magnetic powerhouse and a “rogue,” traveling through space unaccompanied by any parent star.

“This object is right at the boundary between a planet and a brown dwarfBrown DwarfA semi-stellar object made up mostly of hydrogen that straddles the line between a massive Jupiter-like planet and a low-mass red dwarf star. A brown dwarf, however, has insufficient mass to sustain nuclear fusion. , or ‘failed star,’ and is giving us some surprises that can potentially help us understand magnetic processes on both stars and planets,” said Melodie Kao, who led this study while a graduate student at Caltech, and is now a Hubble Postdoctoral Fellow at Arizona State University.

Brown dwarfs are objects too massive to be considered planets, yet not massive enough to sustain nuclear fusion of hydrogen in their cores — the process that powers stars. Theorists suggested in the 1960s that such objects would exist, but the first one was not discovered until 1995. They originally were thought to not emit radio waves, but in 2001 a VLA discovery of radio flaring in one revealed strong magnetic activity.

Subsequent observations showed that some brown dwarfs have strong auroras, similar to those seen in our own Solar System’s giant planets. The auroras seen on Earth are caused by our planet’s magnetic field interacting with the solar wind. However, solitary brown dwarfs do not have a solar wind from a nearby star to interact with. How the auroras are caused in brown dwarfs is unclear, but the scientists think one possibility is an orbiting planet or moon interacting with the brown dwarf’s magnetic field, such as what happens between Jupiter and its moon Io.

The strange object in the latest study, called SIMP J01365663+0933473, has a magnetic field more than 200 times stronger than Jupiter’s. The object was originally detected in 2016 as one of five brown dwarfs the scientists studied with the VLA to gain new knowledge about magnetic fields and the mechanisms by which some of the coolest such objects can produce strong radio emission. Brown dwarf masses are notoriously difficult to measure, and at the time, the object was thought to be an old and much more massive brown dwarf.

Last year, an independent team of scientists discovered that SIMP J01365663+0933473 was part of a very young group of stars. Its young age meant that it was in fact so much less massive that it could be a free-floating planet — only 12.7 times more massive than Jupiter, with a radius 1.22 times that of Jupiter. At 200 million years old and 20 light-years from Earth, the object has a surface temperature of about 825 degrees Celsius, or more than 1500 degrees Fahrenheit. By comparison, the Sun’s surface temperature is about 5,500 degrees Celsius.

The difference between a gas giant planet and a brown dwarf remains hotly debated among astronomers, but one rule of thumb that astronomers use is the mass below which deuterium fusion ceases, known as the “deuterium-burning limit”, around 13 Jupiter masses.

Simultaneously, the Caltech team that originally detected its radio emission in 2016 had observed it again in a new study at even higher radio frequencies and confirmed that its magnetic field was even stronger than first measured.

“When it was announced that SIMP J01365663+0933473 had a mass near the deuterium-burning limit, I had just finished analyzing its newest VLA data,” said Kao.

The VLA observations provided both the first radio detection and the first measurement of the magnetic field of a possible planetary mass object beyond our Solar System.

Such a strong magnetic field “presents huge challenges to our understanding of the dynamo mechanism that produces the magnetic fields in brown dwarfs and exoplanets and helps drive the auroras we see,” said Gregg Hallinan, of Caltech.

“This particular object is exciting because studying its magnetic dynamo mechanisms can give us new insights on how the same type of mechanisms can operate in extrasolar planets — planets beyond our Solar System. We think these mechanisms can work not only in brown dwarfs, but also in both gas giant and terrestrial planets,” Kao said.

“Detecting SIMP J01365663+0933473 with the VLA through its auroral radio emission also means that we may have a new way of detecting exoplanets, including the elusive rogue ones not orbiting a parent star,” Hallinan said.

Kao and Hallinan worked with J. Sebastian Pineda who also was a graduate student at Caltech and is now at the University of Colorado Boulder, David Stevenson of Caltech, and Adam Burgasser of the University of California San Diego. They are reporting their findings in the Astrophysical Journal.

This research is presented in a paper titled “The Strongest Magnetic Fields on the Collest Brown Dwarfs,” by  M. Kao et al. in the Astrophysical Journal Supplement Series. [http://iopscience.iop.org/article/10.3847/1538-4365/aac2d5/meta] 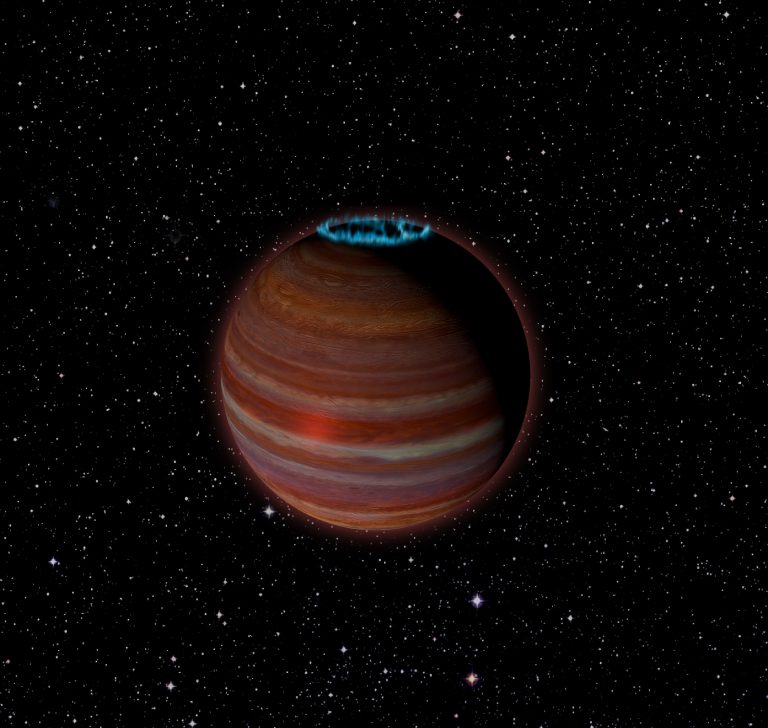 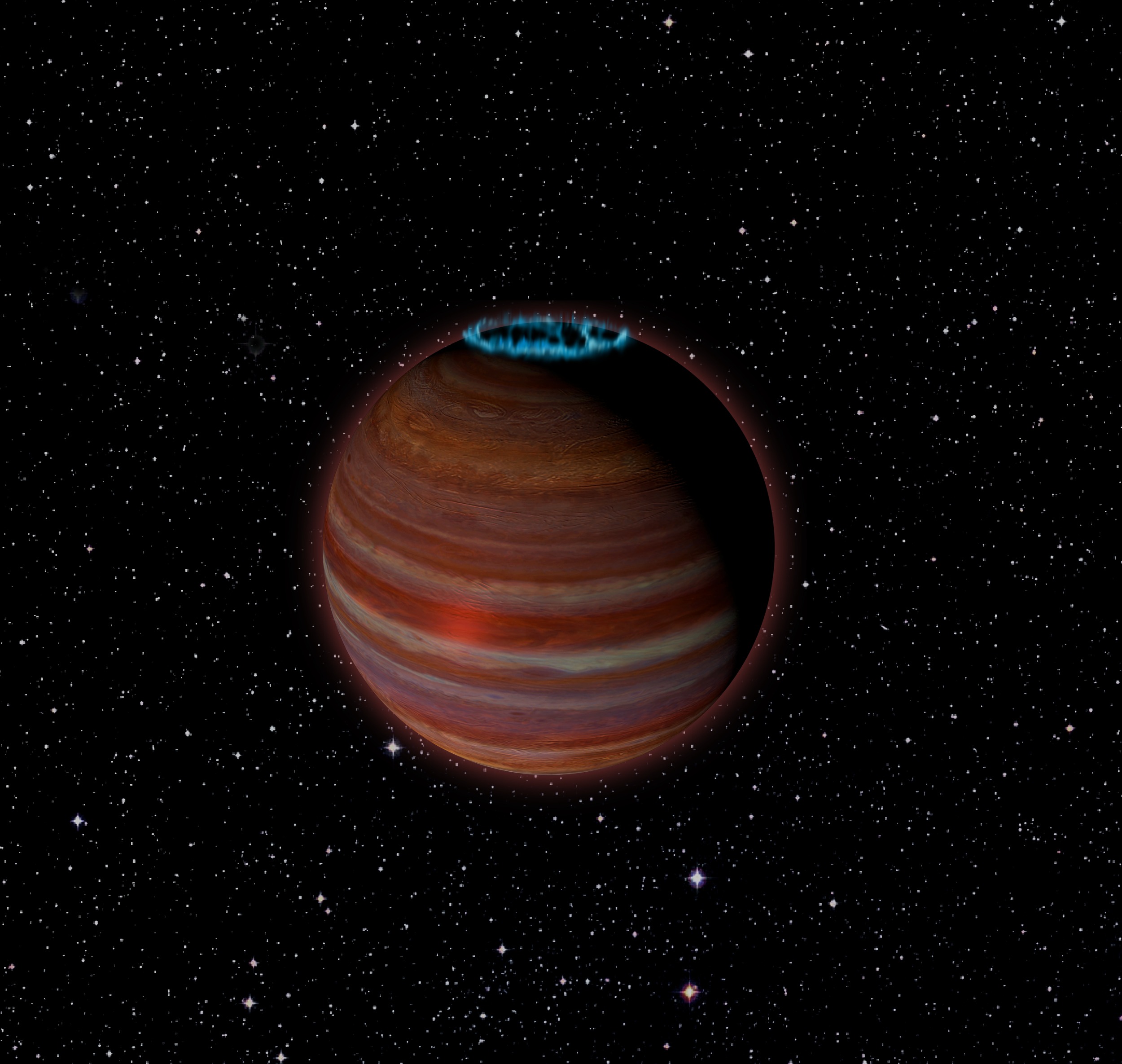