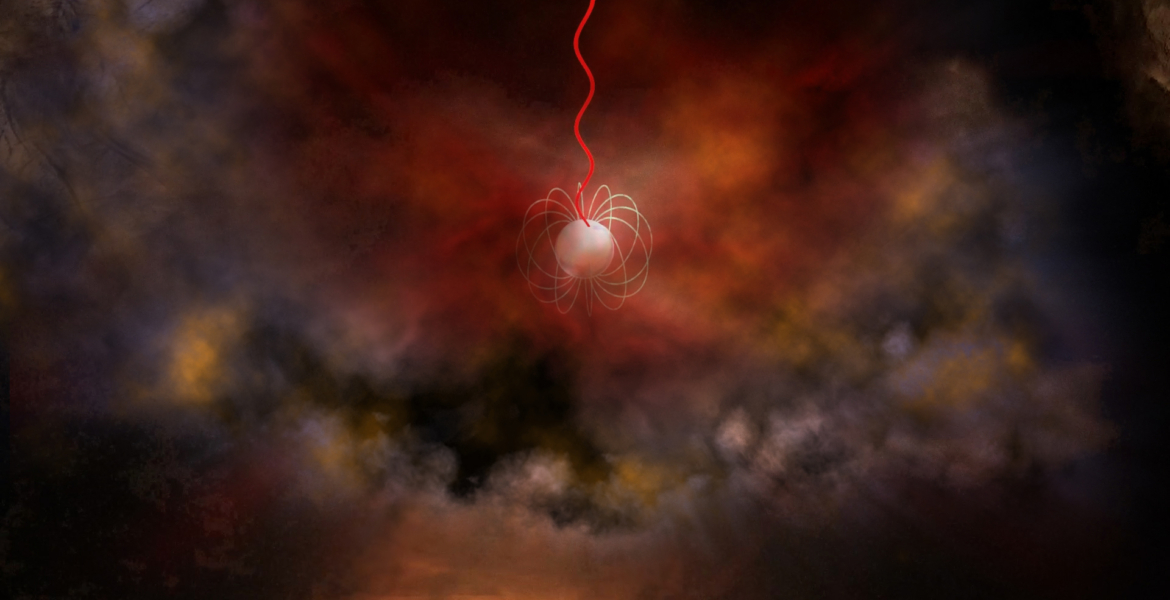 Astronomers have found only the second example of a highly active, repeating Fast Radio Burst (FRB) with a compact source of weaker but persistent radio emission between bursts. The discovery raises new questions about the nature of these mysterious objects and also about their usefulness as tools for studying the nature of intergalactic space. The scientists used the National Science Foundation’s Karl G. Jansky Very Large Array (VLA) and other telescopes to study the object, first discovered in 2019.

The object, called FRB 190520, was found by the Five-hundred-meter Aperture Spherical radio Telescope (FAST) in China. A burst from the object occurred on May 20, 2019, and was found in data from that telescope in November of that year. Follow-up observations with FAST showed that, unlike many other FRBs, it emits frequent, repeating bursts of radio waves.

“These characteristics make this one look a lot like the very first FRB whose position was determined — also by the VLA — back in 2016,” said Casey Law, of Caltech. That development was a major breakthrough, providing the first information about the environment and distance of an FRB. However, its combination of repeating bursts and persistent radio emission between bursts, coming from a compact region, set the 2016 object, called FRB 121102, apart from all other known FRBs, until now.

“Now we have two like this, and that brings up some important questions,” Law said. Law is part of an international team of astronomers reporting their findings in the journal Nature.

The differences between FRB 190520 and FRB 121102 and all the others strengthen a possibility suggested earlier that there may be two different kinds of FRBs.

“Are those that repeat different from those that don’t? What about the persistent radio emission — is that common?” said Kshitij Aggarwal, a graduate student at West Virginia University (WVU).

The astronomers suggest that there may be either two different mechanisms producing FRBs or that the objects producing them may act differently at different stages of their evolution. Leading candidates for the sources of FRBs are the superdense neutron stars left over after a massive star explodes as a supernova, or neutron stars with ultra-strong magnetic fields, called magnetars.

One characteristic of FRB 190520 calls into question the usefulness of FRBs as tools for studying the material between them and Earth. Astronomers often analyze the effects of intervening material on the radio waves emitted by distant objects to learn about that tenuous material itself. One such effect occurs when radio waves pass through space that contains free electrons. In that case, higher-frequency waves travel more quickly than lower-frequency waves.

This effect, called dispersion, can be measured to determine the density of electrons in the space between the object and Earth, or, if the electron density is known or assumed, provide a rough estimate of the distance to the object. The effect often is used to make distance estimates to pulsars.

That didn’t work for FRB 190520. An independent measurement of the distance based on the Doppler shift of the galaxy’s light caused by the expansion of the Universe placed the galaxy at nearly 3 billion light-years from Earth. However, the burst’s signal shows an amount of dispersion that ordinarily would indicate a distance of roughly 8 to 9.5 billion light-years.

“This means that there is a lot of material near the FRB that would confuse any attempt to use it to measure the gas between galaxies,” Aggarwal said. “If that’s the case with others, then we can’t count on using FRBs as cosmic yardsticks,” he added.

The astronomers speculated that FRB 190520 may be a “newborn,” still surrounded by dense material ejected by the supernova explosion that left behind the neutron star. As that material eventually dissipates, the dispersion of the burst signals also would decline. Under the “newborn” scenario, they said, the repeating bursts also might be a characteristic of younger FRBs and dwindle with age.

“The FRB field is moving very fast right now and new discoveries are coming out monthly. However, big questions still remain, and this object is giving us challenging clues about those questions,” said Sarah Burke-Spolaor, of WVU. 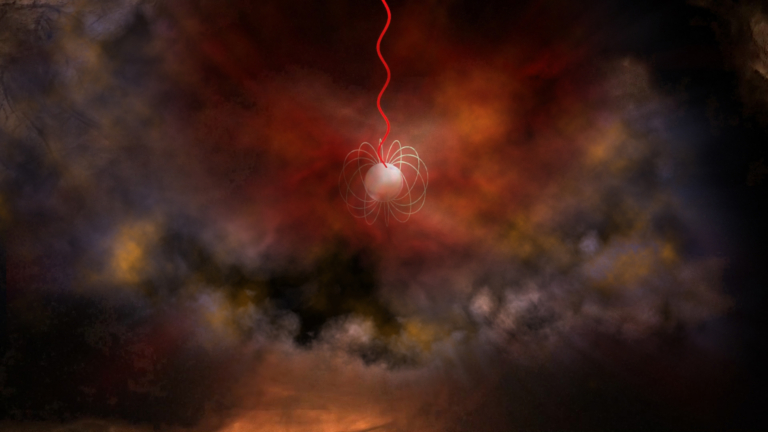 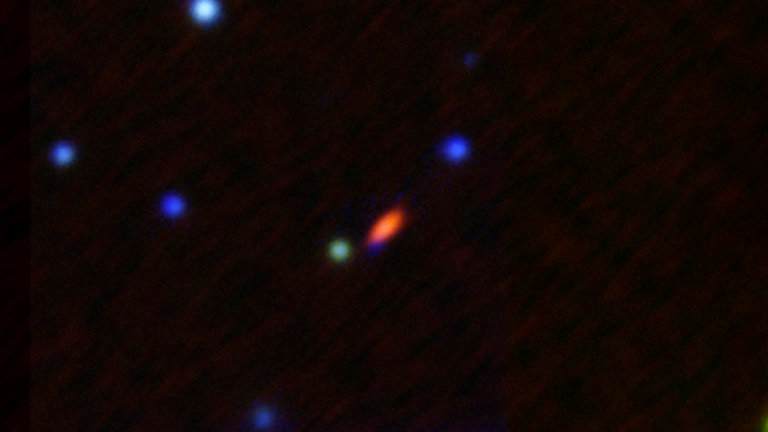 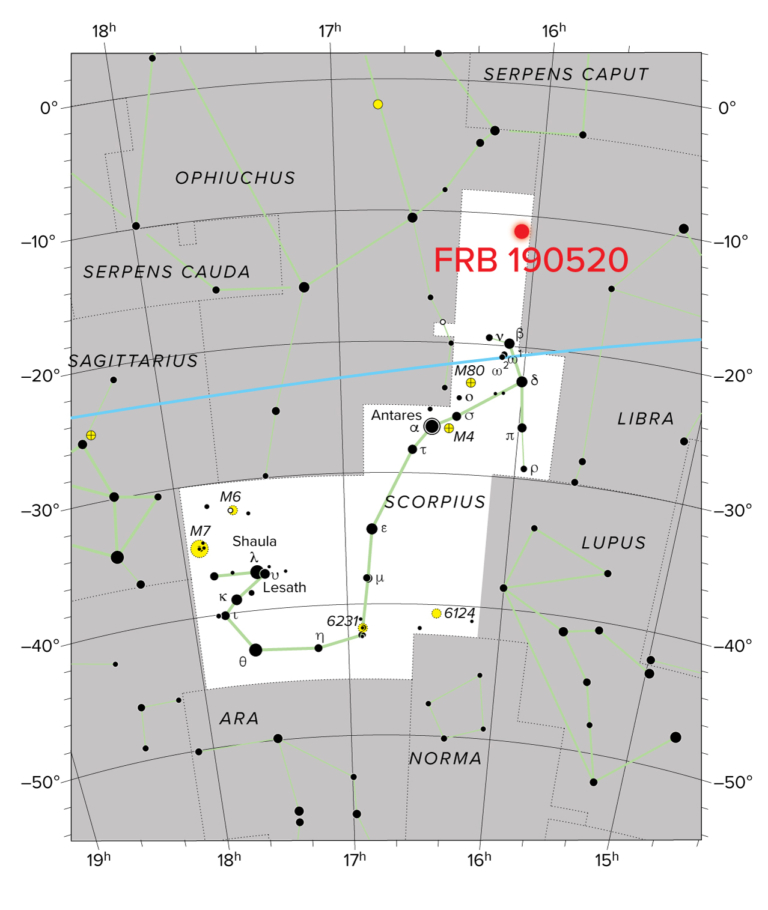 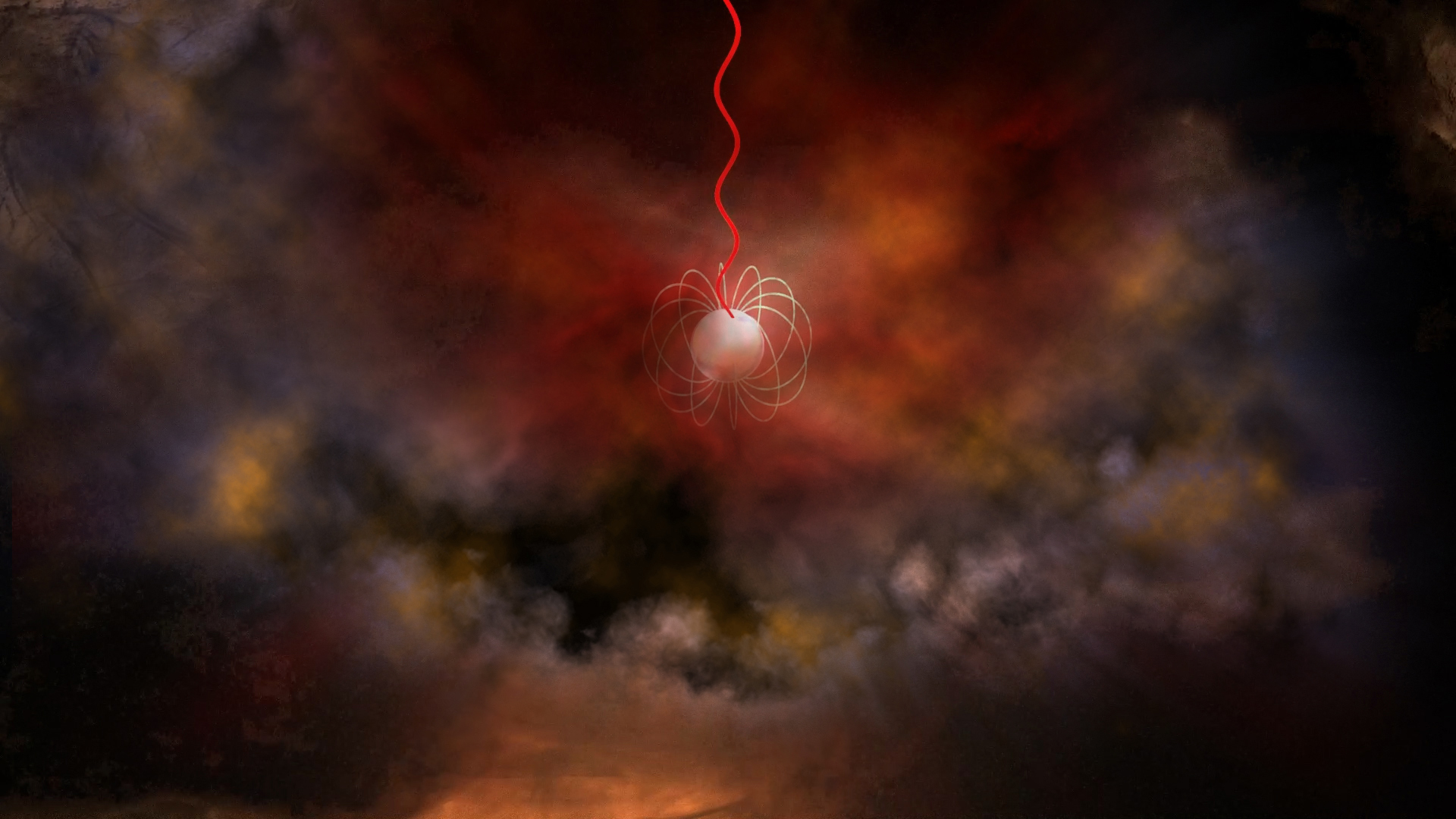 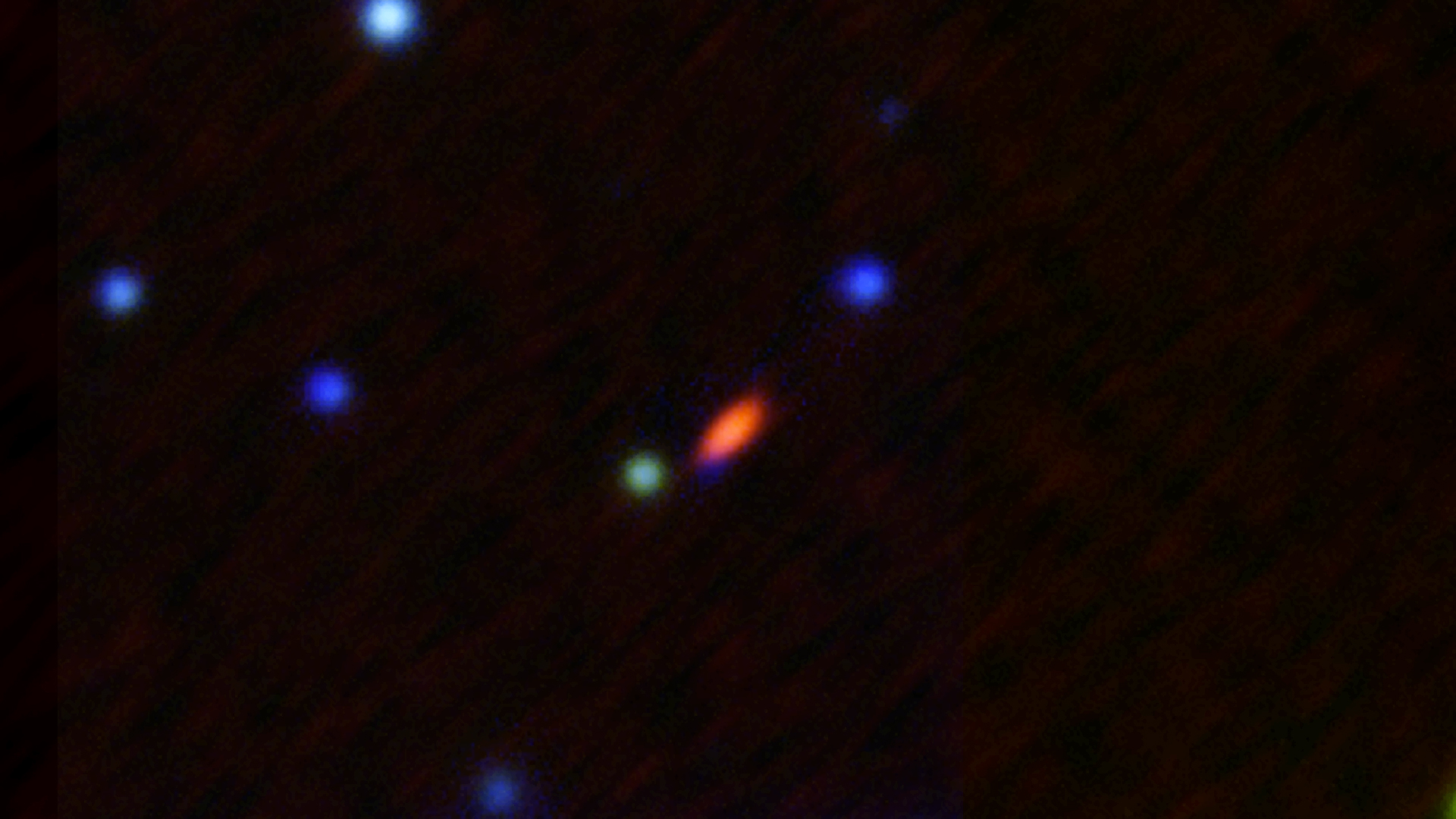 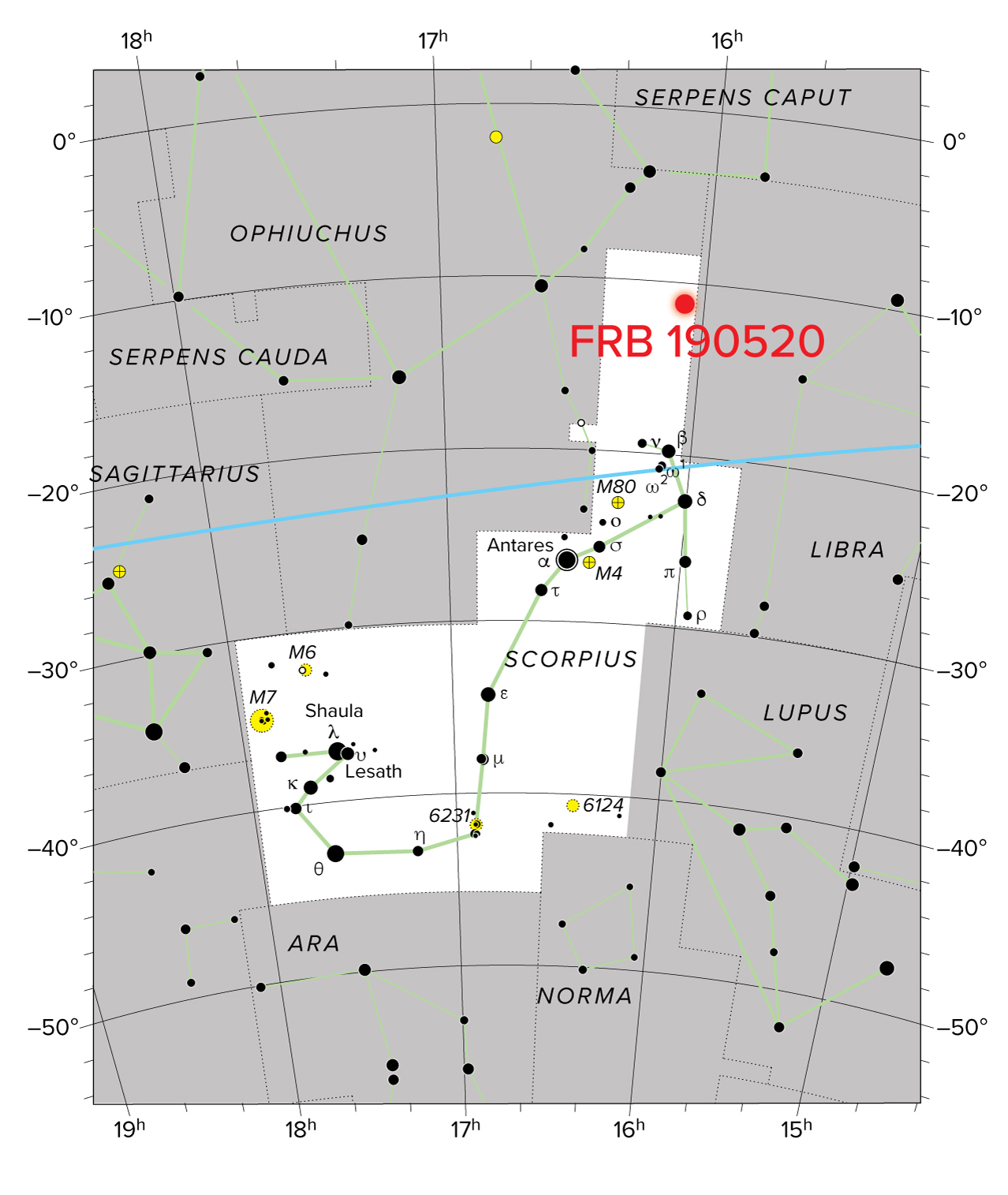