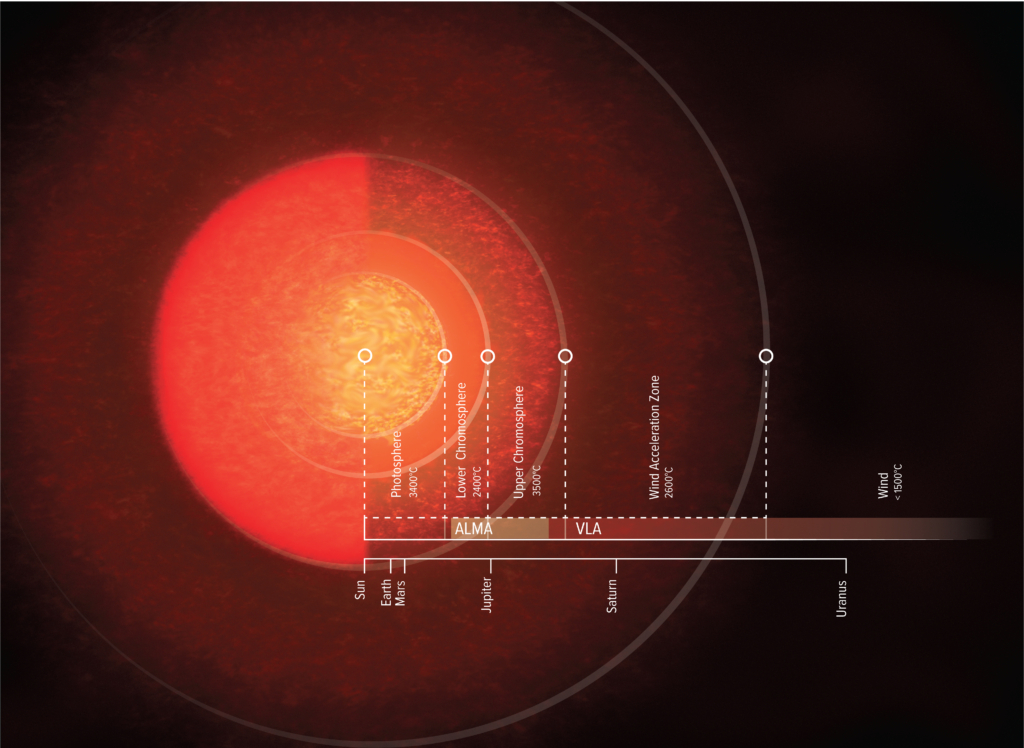 An international team of astronomers has created the most detailed map yet of the atmosphere of the red supergiant star Antares. The unprecedented sensitivity and resolution of both the Atacama Large Millimeter/submillimeter Array (ALMA) and the National Science Foundation’s Karl G. Jansky Very Large Array (VLA) revealed the size and temperature of Antares’ atmosphere from just above the star’s surface, throughout its chromosphere, and all the way out to the wind region.

Red supergiant stars, like Antares and its more well-known cousin Betelgeuse, are huge, relatively cold stars at the end of their lifetime. They are on their way to run out of fuel, collapse, and become supernovae. Through their vast stellar winds, they launch heavy elements into space, thereby playing an important role in providing the essential building blocks for life in the universe. But it is a mystery how these enormous winds are launched. A detailed study of the atmosphere of Antares, the closest supergiant star to Earth, provides a crucial step towards an answer.

The ALMA and VLA map of Antares is the most detailed radio map yet of any star, other than the Sun. ALMA observed Antares close to its surface (its optical photosphere) in shorter wavelengths, and the longer wavelengths observed by the VLA revealed the star’s atmosphere further out. As seen in visible light, Antares’ diameter is approximately 700 times larger than the Sun. But when ALMA and the VLA revealed its atmosphere in radio light, the supergiant turned out to be even more gigantic.

“The size of a star can vary dramatically depending on what wavelength of light it is observed with,” explained Eamon O’Gorman of the Dublin Institute for Advanced Studies in Ireland and lead author of the study published in the June 16 edition of the journal Astronomy & Astrophysics. “The longer wavelengths of the VLA revealed the supergiant’s atmosphere out to nearly 12 times the star’s radius.”

The radio telescopes measured the temperature of most of the gas and plasma in Antares’ atmosphere. Most noticeable was the temperature in the chromosphere. This is the region above the star’s surface that is heated up by magnetic fields and shock waves created by the vigorous roiling convection at the stellar surface – much like the bubbling motion in a pot of boiling water. Not much is known about chromospheres, and this is the first time that this region has been detected in radio waves.

Artist impression of Antares and its atmosphere. As seen with the naked eye (up until the photosphere), Antares is around 700 times larger than our sun, big enough to fill the solar system beyond the orbit of Mars (Solar System scale shown for comparison). But ALMA and VLA showed that its atmosphere, including the lower and upper chromosphere and wind zones, reaches out 12 times farther than that. To view this model of Antares in Augmented Reality (AR), open this press release on your smartphone and click the small cube on the lower right corner of this image. Move your phone around the room, and give it a minute to load. Credit: S. Dagnello (NRAO/AUI/NSF)

“We found that the chromosphere is ‘lukewarm’ rather than hot, in stellar temperatures,” said O’Gorman. “The difference can be explained because our radio measurements are a sensitive thermometer for most of the gas and plasma in the star’s atmosphere, whereas past optical and ultraviolet observations were only sensitive to very hot gas and plasma.”

“We think that red supergiant stars, such as Antares and Betelgeuse, have an inhomogeneous atmosphere,” said co-author Keiichi Ohnaka of the Universidad Católica del Norte in Chile who previously observed Antares’ atmosphere in infrared light. “Imagine that their atmospheres are a painting made out of many dots of different colors, representing different temperatures. Most of the painting contains dots of the lukewarm gas that radio telescopes can see, but there are also cold dots that only infrared telescopes can see, and hot dots that UV telescopes see. At the moment we can’t observe these dots individually, but we want to try that in future studies.”

In the ALMA and VLA data, astronomers for the first time saw a clear distinction between the chromosphere and the region where winds start to form. In the VLA image, a huge wind is visible, ejected from Antares and lit up by its smaller but hotter companion star Antares B.

“When I was a student, I dreamt of having data like this,” said co-author Graham Harper of the University of Colorado, Boulder. “Knowing the actual sizes and temperatures of the atmospheric zones gives us a clue of how these huge winds start to form and how much mass is being ejected.”

“Our innate understanding of the night sky is that stars are just points of light. The fact we can map the atmospheres of these supergiant stars in detail, is a true testament to technological advances in interferometry. These tour de force observations bring the universe close, right into our own backyard,” said Chris Carilli of the National Radio Astronomy Observatory, who was involved in the first observations of Betelgeuse at multiple radio wavelengths with the VLA in 1998.

This research was presented in a paper titled “ALMA and VLA reveal the lukewarm chromospheres of the nearby red supergiants Antares and Betelgeuse,” by E. O’Gorman et al., appearing in the journal Astronomy & Astrophysics. www.aanda.org/10.1051/0004-6361/202037756

Read our press release on SpaceScoop.org, the astronomy news service for children! 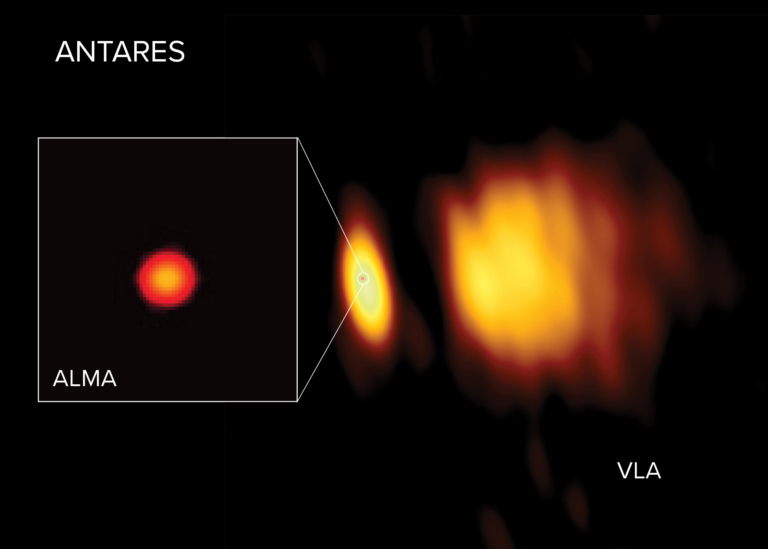 Radio images of Antares with ALMA and the VLA. 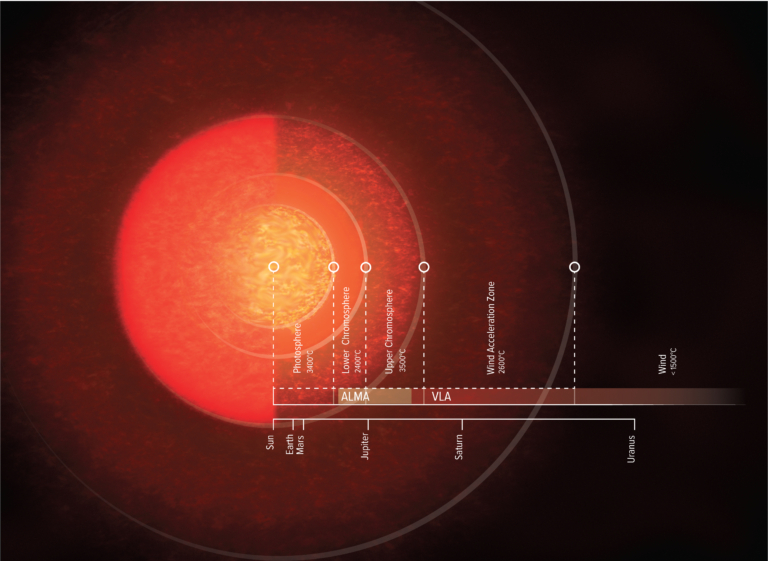 Artist impression of the atmosphere of Antares. 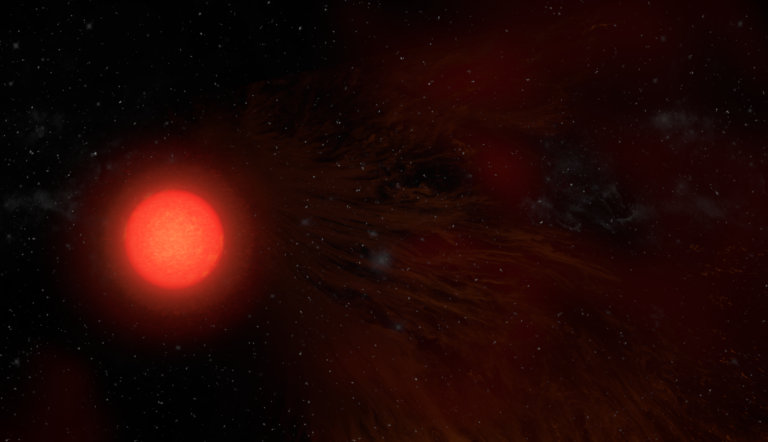 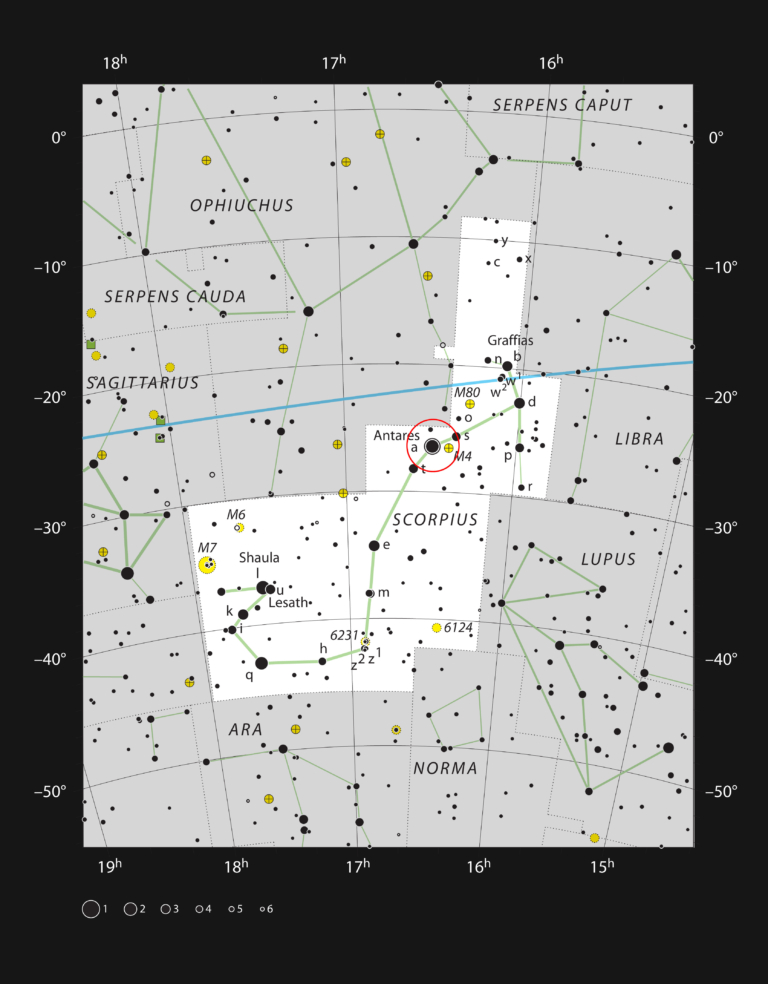 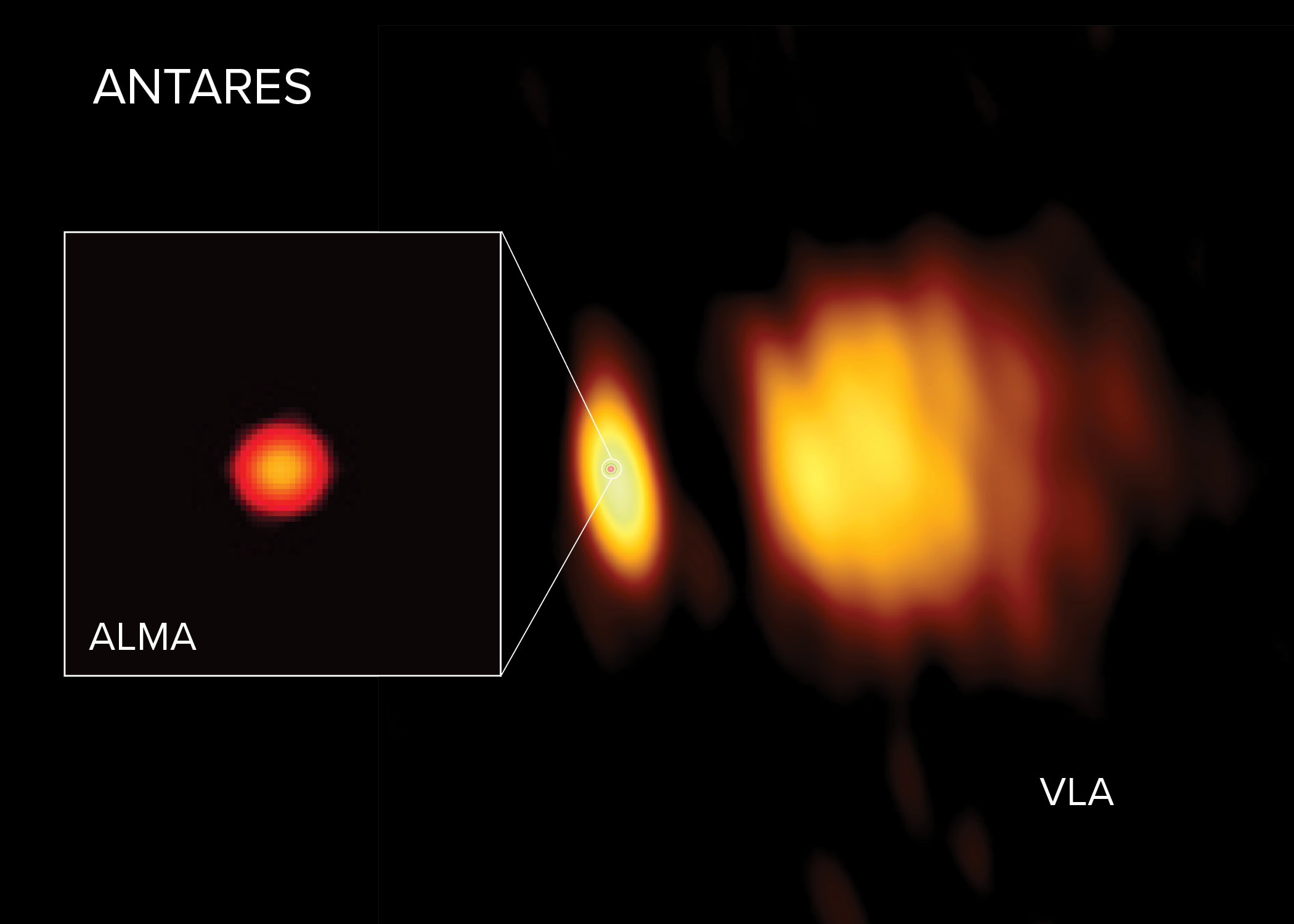 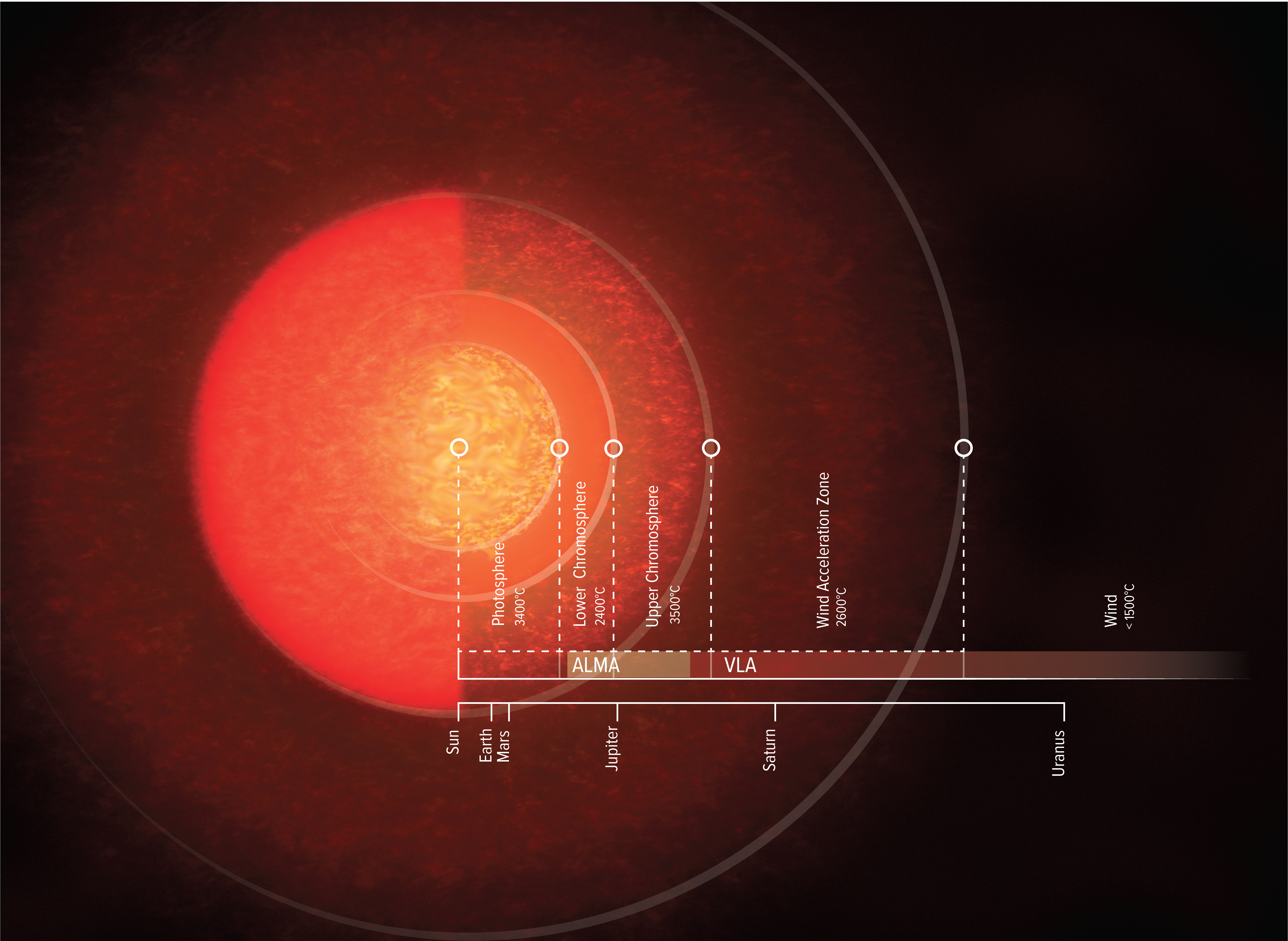 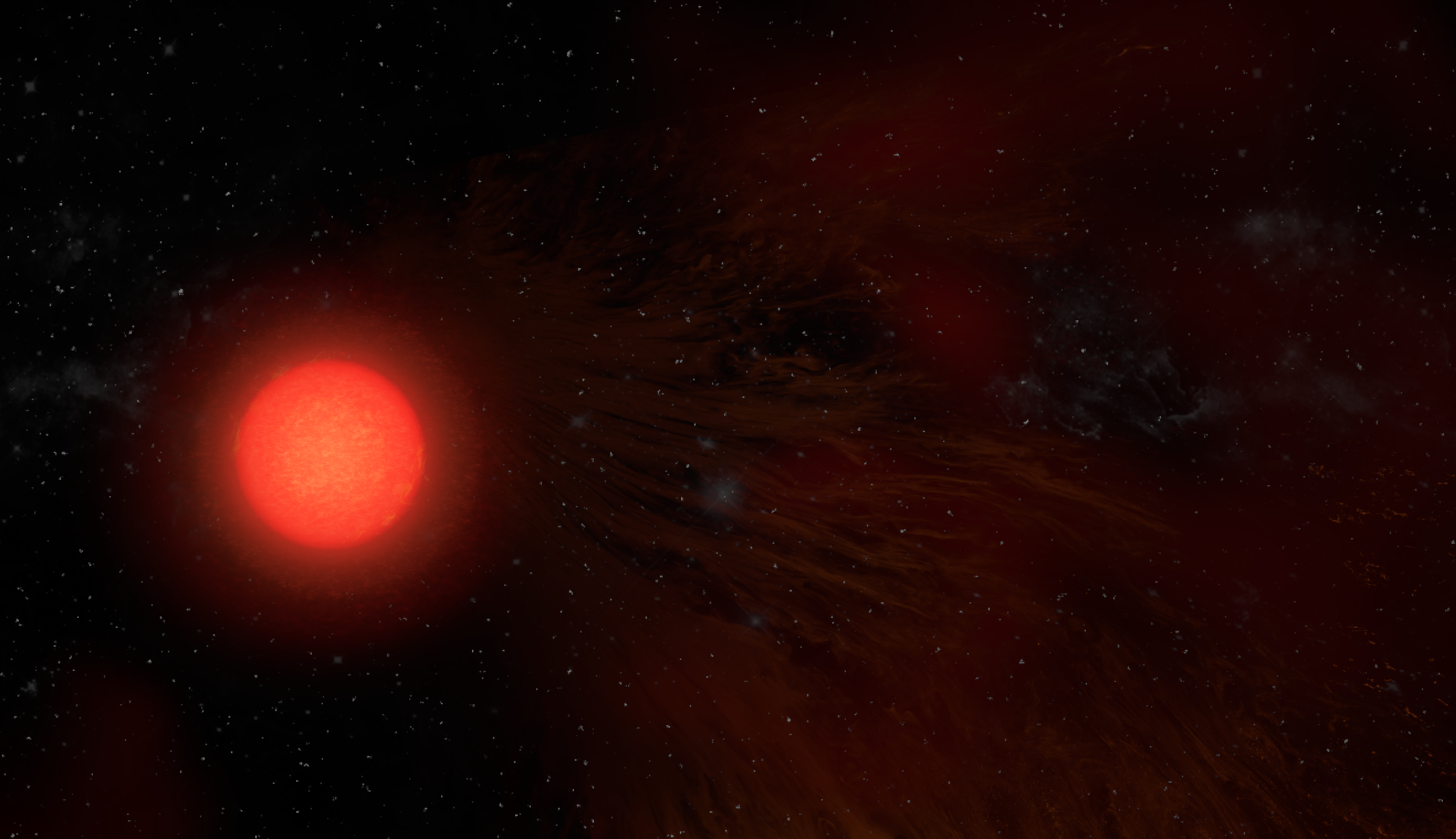 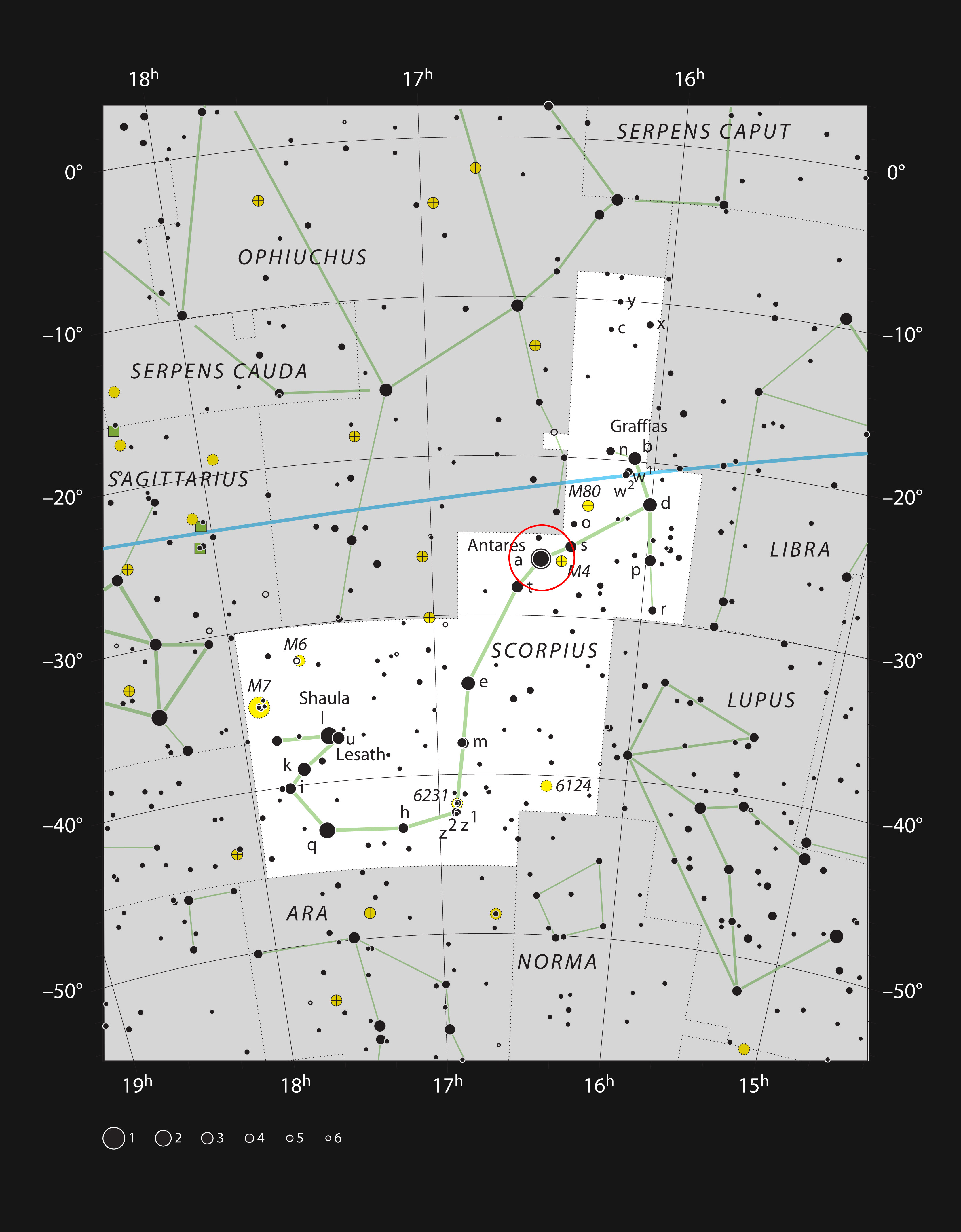