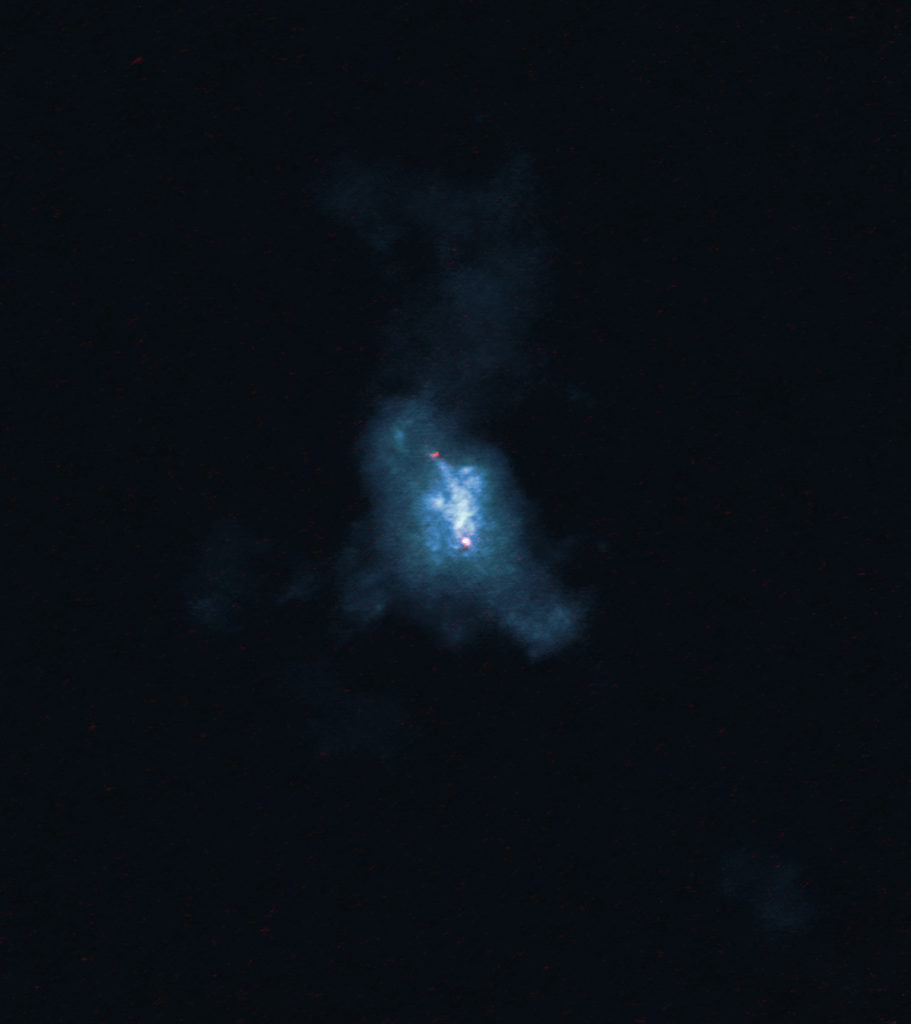 An international team of astronomers used the Atacama Large Millimeter/submillimeter Array (ALMA)Atacama Large Millimeter/submillimeter Array (ALMA)Funded by the U.S. National Science Foundation and its international partners (NRAO/ESO/NAOJ), ALMA is among the most complex and powerful astronomical observatories on Earth or in space. The telescope is an array of 66 high-precision dish antennas in northern Chile. to create the most detailed image yet of the gas surrounding two supermassive black holes in a merging galaxy.

400 million light-years away from Earth, in the constellation of Ophiuchus, two galaxies are crashing into each other and forming a galaxy we know as NGC 6240. This peculiarly-shaped galaxy has been observed many times before, as it is relatively close by. But NGC 6240 is complex and chaotic. The collision between the two galaxies is still ongoing, bringing along in the crash two growing supermassive black holesSupermassive Black HoleA black hole that has a million or as much as a billion solar masses. These large black holes lurk at the centers of most galaxies. that will likely merge as one larger black hole.

To understand what is happening within NGC 6240, astronomers want to observe the dust and gas surrounding the black holes in detail, but previous images have not been sharp enough to do that. New ALMA observations have increased the resolution of the images by a factor of ten – showing for the first time the structure of the cold gas in the galaxy, even within the sphere of influence of the black holes.

“The key to understanding this galaxy system is molecular gas,” explained Ezequiel Treister of the Pontificia Universidad Católica in Santiago, Chile. “This gas is the fuel that is needed to form stars, but it also feeds the supermassive black holes, which allows them to grow.”

Most of the gas is located in a region between the two black holes. Less detailed observations taken previously suggested that this gas might be a rotating disk. “We don’t find any evidence for that,” said Treister. “Instead, we see a chaotic stream of gas with filaments and bubbles between the black holes. Some of this gas is ejected outwards with speeds up to 500 kilometers per second. We don’t know yet what causes these outflows.”

Another reason to observe the gas in such detail is that it helps to determine the mass of the black holes. “Previous models, based on surrounding stars, indicated that the black holes were much more massive than we expected, around a billion times the mass of our Sun,” said Anne Medling of the University of Toledo in Ohio. “But these new ALMA images for the first time showed us how much gas is caught up inside the black holes’ sphere of influenceSphere of influenceThe innermost region of a galaxy where a black hole's gravity is the dominant force.. This mass is significant, and therefore we now estimate the black hole masses to be lower: around a few hundred million times the mass of our Sun. Based on this, we think that most previous black hole measurements in systems like this could be off by 5-90 percent.”

The gas also turned out to be even closer to the black holes than the astronomers had expected. “It is located in a very extreme environment,” explained Medling. “We think that it will eventually fall into the black hole, or it will be ejected at high speeds.”

The astronomers don’t find evidence for a third black hole in the galaxy, which another team recently claimed to have discovered. “We don’t see molecular gas associated with this claimed third nucleus,” said Treister. “It could be a local star cluster instead of a black hole, but we need to study it much more to say anything about it with certainty.”

ALMA’s high sensitivitySensitivityThe sensitivity of a telescope is the smallest signal that it can clearly measure from a source in space. It is the minimum brightness that a telescope can detect. A telescope with high sensitivity can detect very dim objects, whereas a low sensitivity telescope can only detect the brighter objects in space. and resolutionResolutionThe ability of a telescope to show detail. One common way to describe the resolution of a telescope is to state the minimum angular separation at which a double star can be distinguished as two separate stars. (see double star for more) are crucial to learn more about supermassive black holes and the role of gas in interacting galaxies. “This galaxy is so complex, that we could never know what is going on inside it without these detailed radio images,” said Loreto Barcos-Muñoz of the National Radio Astronomy Observatory in Charlottesville, Virginia. “We now have a better idea of the 3D-structure of the galaxy, which gives us the opportunity to understand how galaxies evolve during the latest stages of an ongoing merger. In a few hundred million years, this galaxy will look completely different.”

This research was presented at the 235th meeting of the American Astronomical Society in Honolulu, Hawaii, and in two papers: 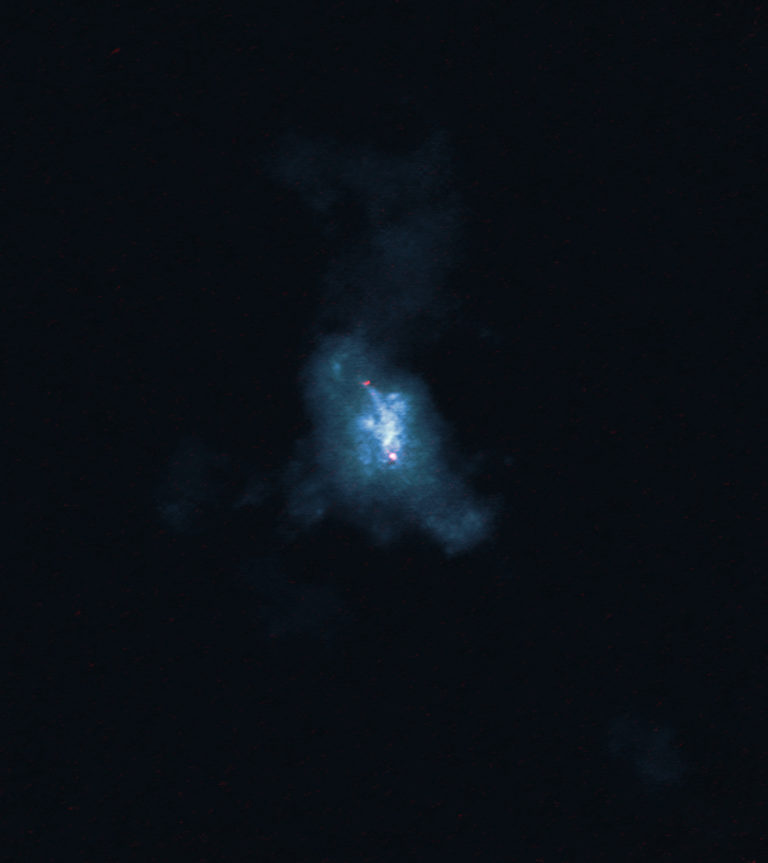 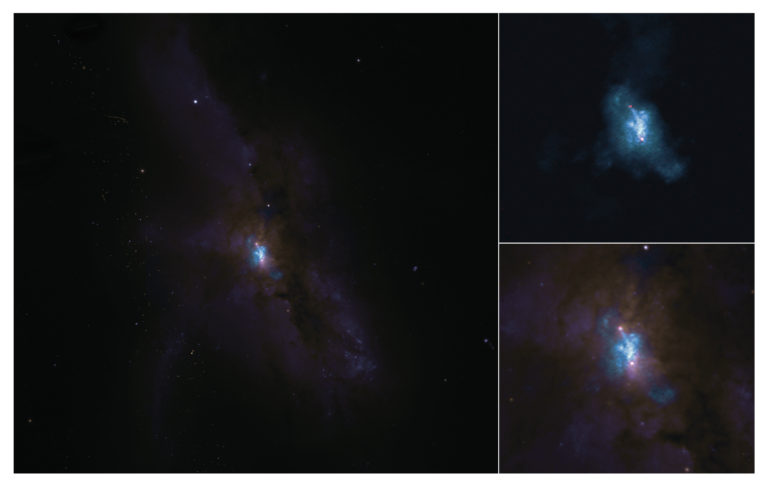 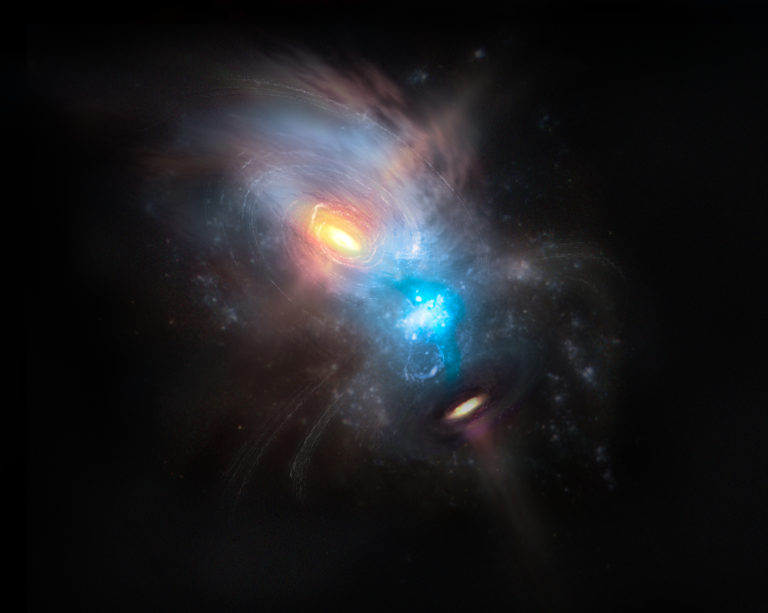 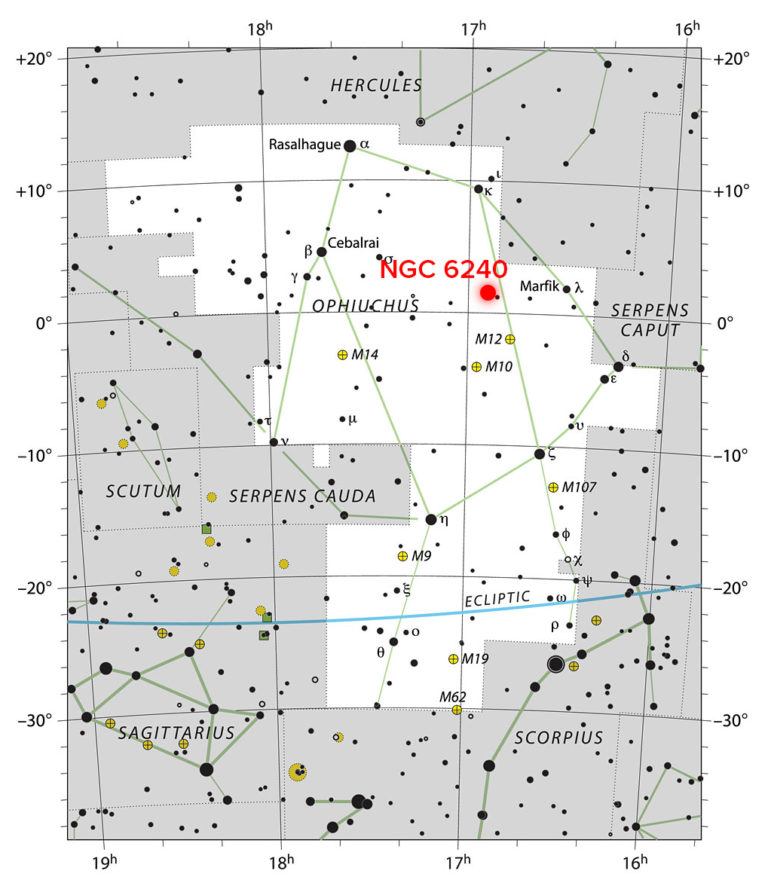 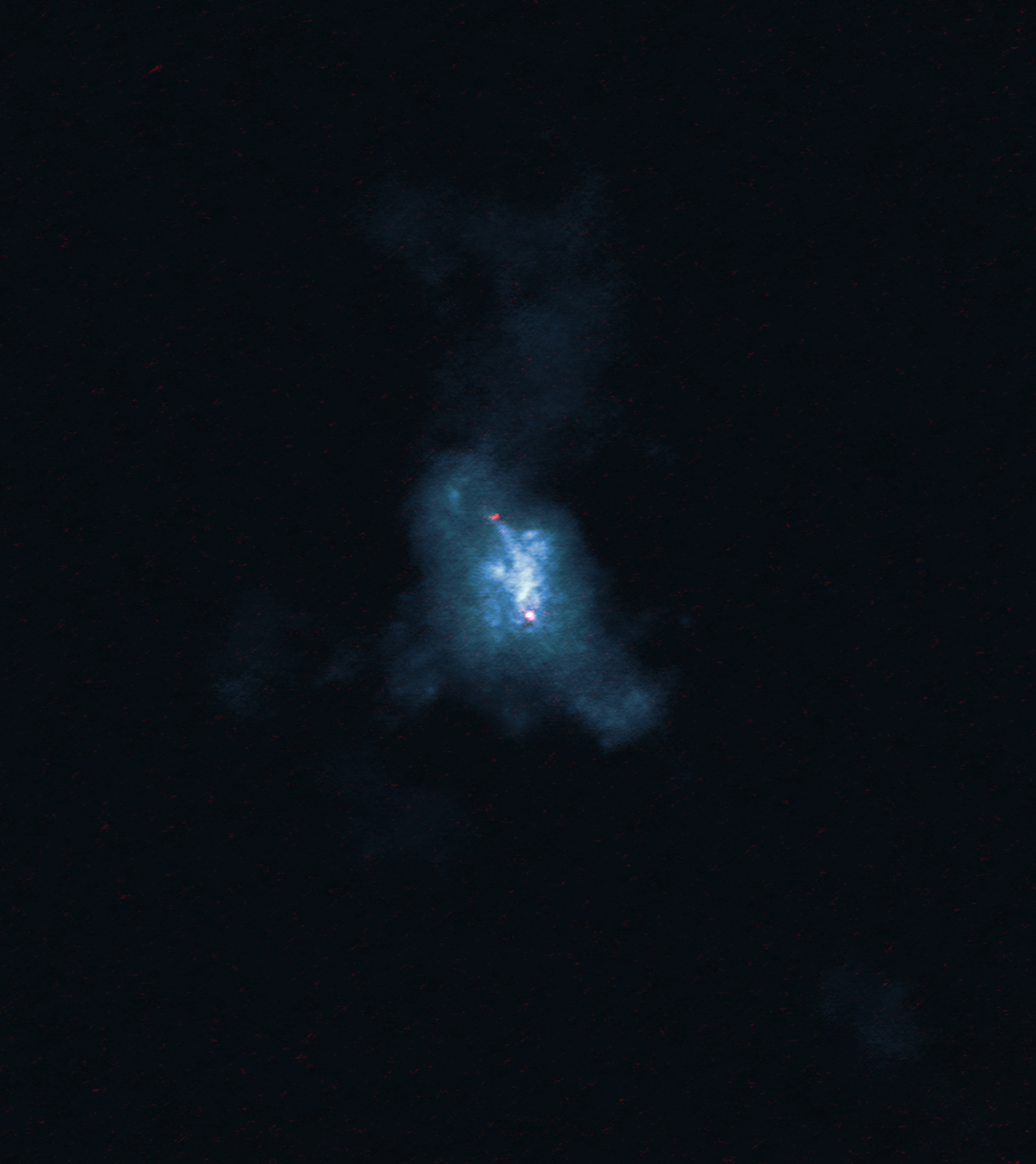 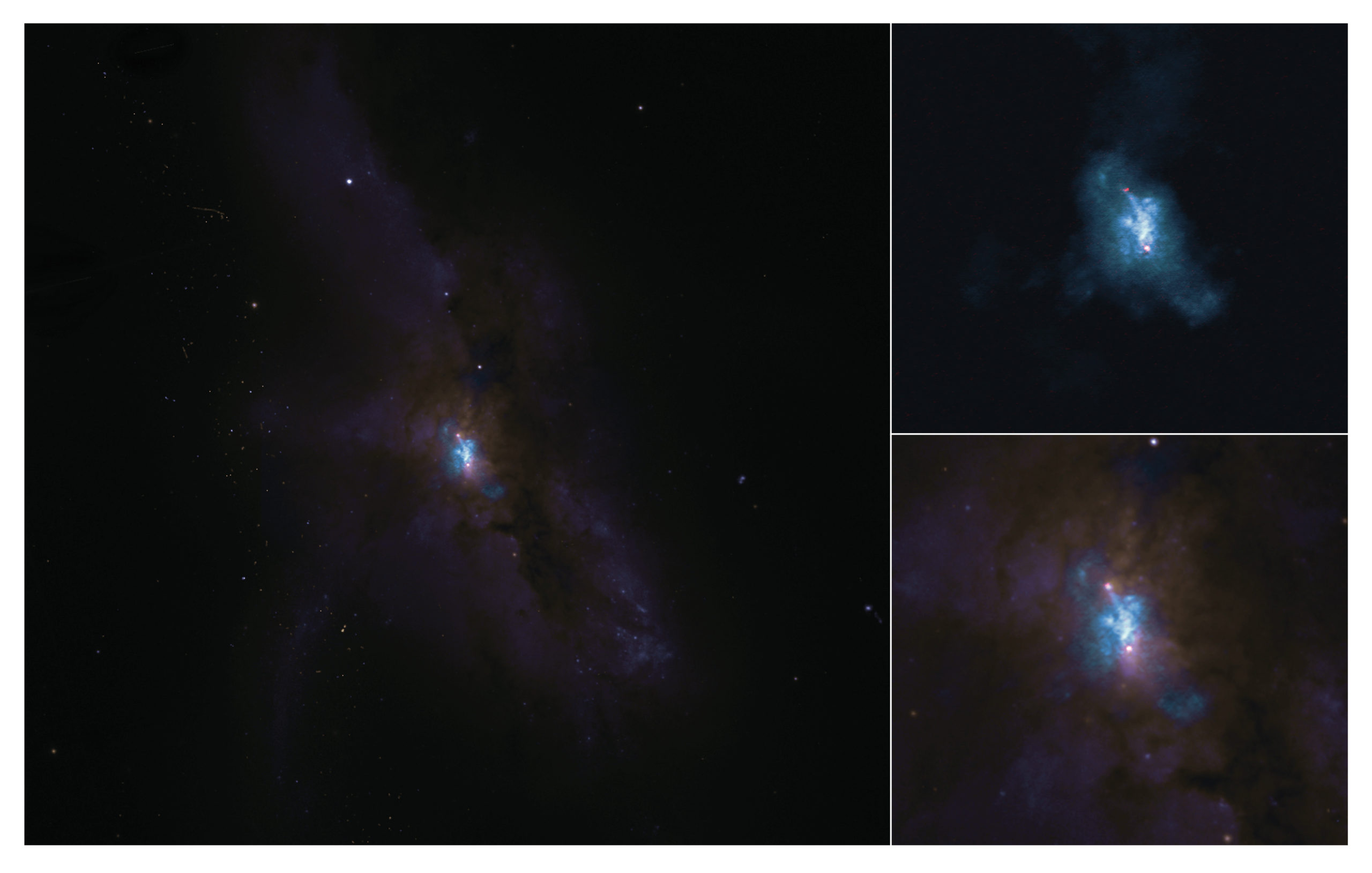 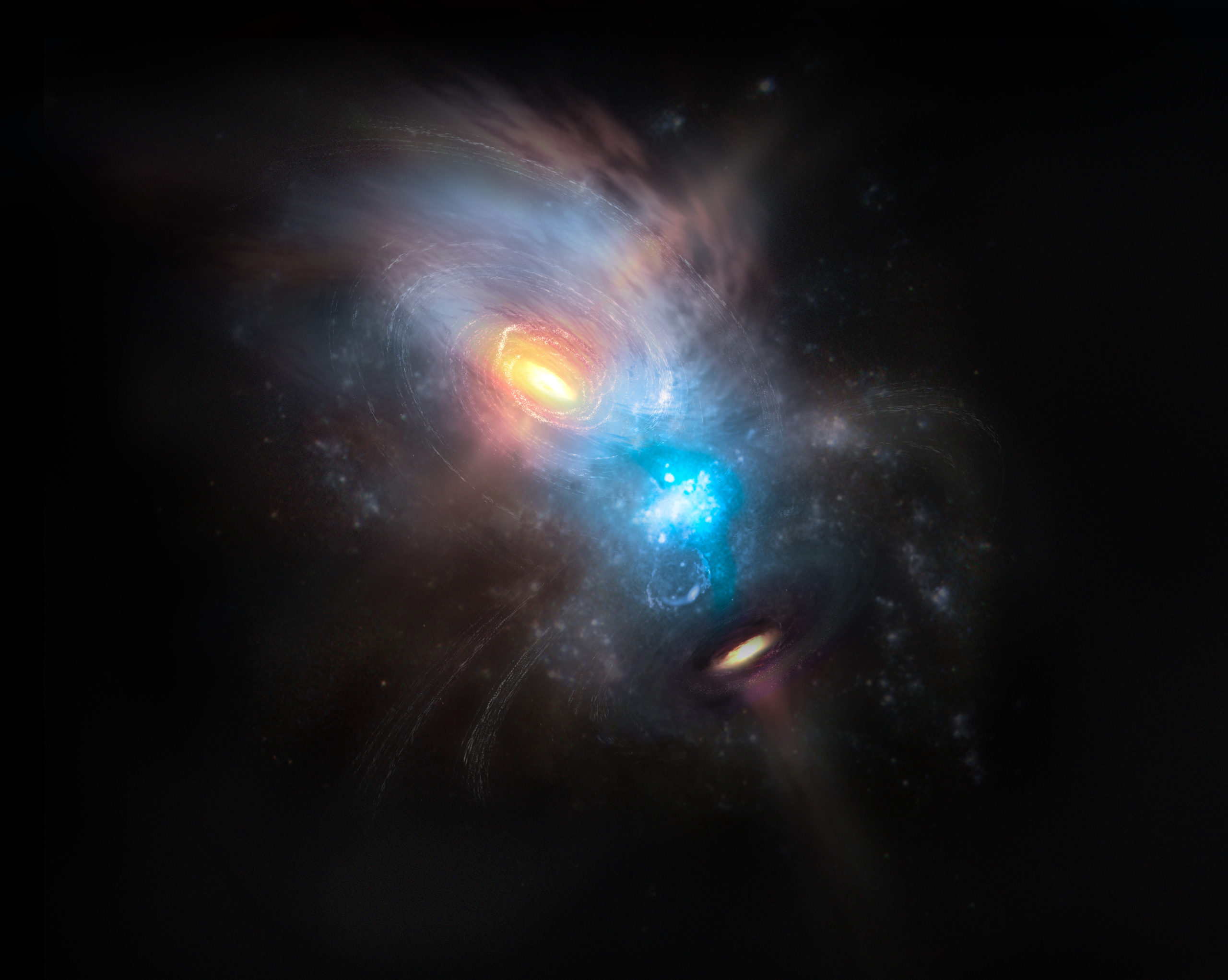 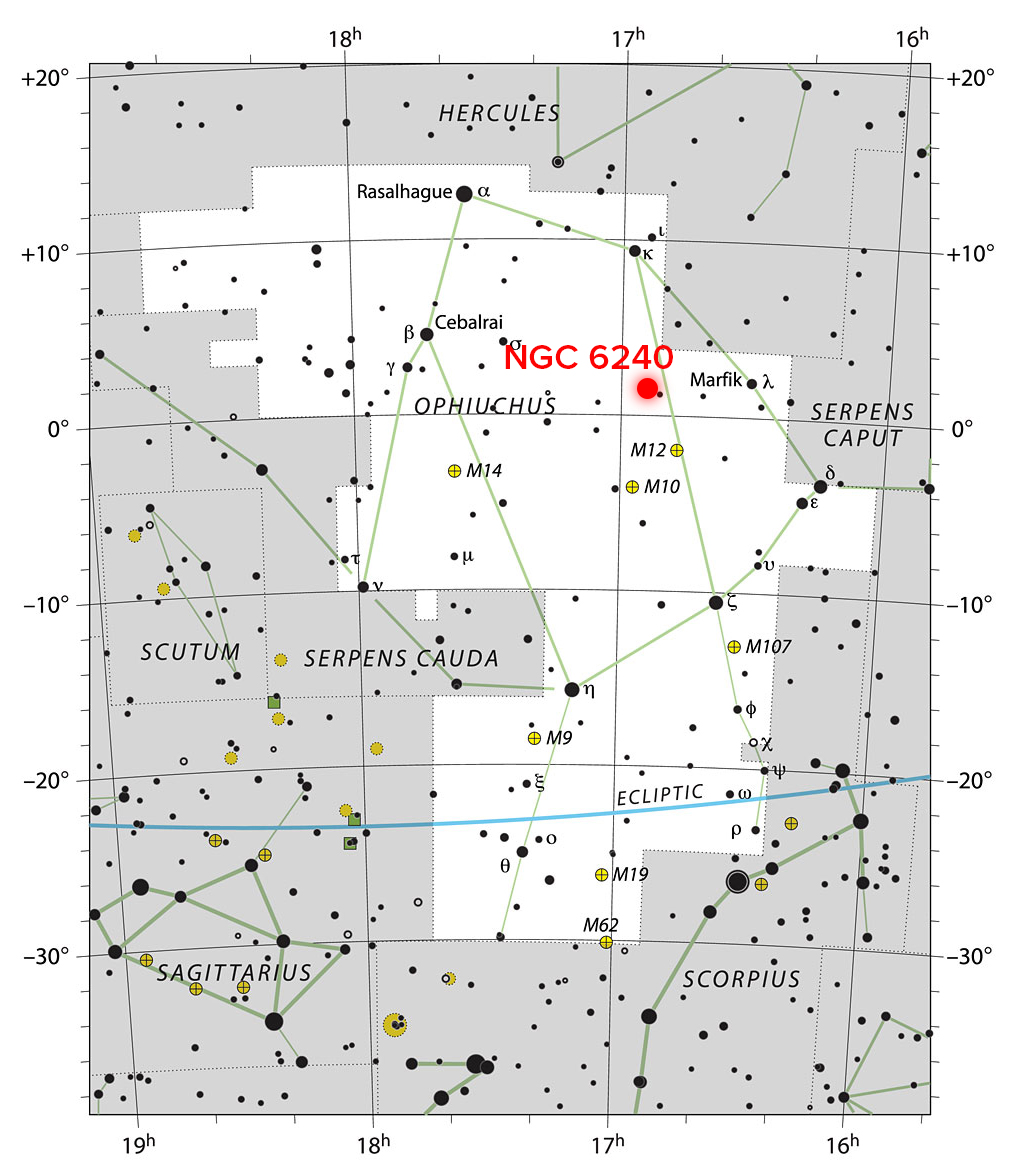