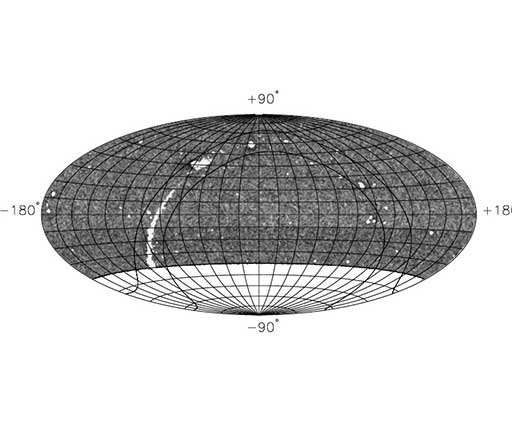 An original and comprehensive data set potentially full of scientific surprises now is available to astronomers, students and the public through the information superhighway. Radio images of the sky produced by the Very Large Array radio telescope — one of the premier astronomical instruments in the world — as part of a massive survey now are stored in an electronic repository avail- able over the Internet computer communications network. “Each of these sensitive new sky maps shows about a thousand radio-emitting objects, most of which have never been seen before,” said Dr. J. J. Condon, leader of the National Radio Astronomy Observatory (NRAO) survey team. “We are releasing them as soon as they are completed because they contain more data than we could possibly analyze by ourselves.”

“By using electronic distribution, we can open this tremendous resource of information for computer analysis by all astronomers immediately, without waiting for traditional publication,” Condon added. The radio images are copyright NRAO/ AUI. Permission is granted for use of the material without charge for scholarly, educational and private non-commercial purposes.

“It is entirely conceivable — even probable — that valuable discoveries will be made by students or amateur astronomers who devote the time to study these maps carefully,” said team member Dr. W. D. Cotton. “Making this new information available electronically means that more people can participate in adding to its scientific value.”

The maps are a product of the NRAO VLA Sky Survey (NVSS), which began its observational phase in September of 1993 and will cover 82 percent of the sky when completed by the end of 1996. The NVSS is expected to produce a catalog of more than two million radio-emitting objects in the sky, and it is the first sky survey sensitive to linearly polarized emission from radio sources beyond our own Milky Way galaxy. “The NVSS is being made as a service to the entire astronomical community,” Condon said. The survey will require about 2,500 hours of VLA observing time to complete.

The data from the NVSS will become available in several forms, including complete processed maps, lists of the radio-emit- ting objects found, and data from which astronomers may produce maps tailored to their own interests. The data products are being placed in the public electronic repository as soon as NRAO scientists have verified their accuracy. Those interested should contact Condon at Internet address jcondonatnrao.edu for more information about accessing the data.

The Very Large Array, in west-central New Mexico, is a radio telescope consisting of 27 dish antennas, each 82 feet in diameter, arranged in the shape of a Y. The arms of the Y are 13 miles long, and the 230-ton antennas are routinely moved into different positions along the arms to provide a “zoom lens” capability for the telescope. Dedicated in 1980, the VLA is used annually by more than 600 astronomers from around the world. One of the most versatile instruments available to astronomers, it can observe objects ranging from planets, comets and asteroids in our own solar system out to distant radio galaxies and quasars near the edge of the observable universe.

In addition to the NVSS, the VLA also is making another, more detailed, survey of a smaller region of the sky. This survey, called FIRST (Faint Images of the Radio Sky at Twenty centimeters), will yield very accurate positions of radio-emitting objects in the same area of the sky to be surveyed in visible light by the Sloan Digital Sky Survey. The FIRST survey is headed by Dr. Robert H. Becker of the University of California at Davis and Lawrence Livermore National Laboratory.

Each of these sensitive new sky maps shows about a thousand radio-emitting objects, most of...Read More
Credit: NRAO/AUI/NSF