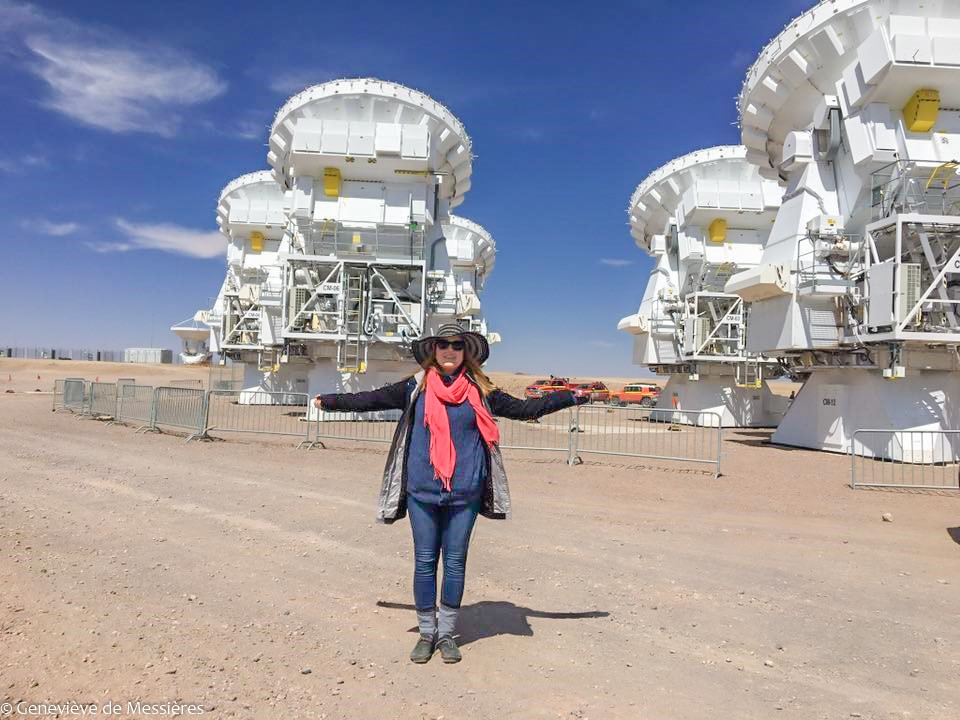 I have spent my entire life at sea level. From the valleys of Ohio to Washington, D.C., I have gone up some hills, but not very big ones. So, in January 2018, when I found myself above half of the Earth’s atmosphere, generously gulping oxygen from a tank on my back, it hit me that this would probably be as close as I would get to outer space without being in an airplane. How did I get up so high?

If you take a flight from Santiago, Chile, to Calama, and drive a few hours, you will reach an area of the Atacama Desert that has been used to view the skies for centuries. Chajnantor Plateau is the perfect place to view clear, dark skies. Its name means “launch site” in Kunza, the language of Atacameño, the local indigenous community. Chajnantor is very high (about 5,000 meters above sea level) and dry, with very little water vapor, making it an ideal location for doing radio astronomy. Atop that plateau for the last half a decade, 64 huge antennas work as one coordinated observatory to explore the universe. That observatory’s name is ALMA, or The Atacama Large Millimeter/submillimeter Array, and it is where I had my high-altitude experience.

I visited ALMA as part of the Astronomy in Chile Educator Ambassadors Program (ACEAP). For this project, astronomy advocates and educators from the United States visit U.S.-funded astronomy projects in Chile, then return home to spread the word about our investment there. My group visited sites such as Cerro Tololo Inter-American Observatory and ALMA, which are both partially funded by the National Science Foundation. These observatories provide a unique perspective into the universe through different instruments, designed to collect different wavelengths of light.

ALMA looks a bit different from the other sites we visited in Chile. You might think it looks like a bunch of satellite dishes… and it kind of is! Just like the Very Large Array in Socorro, New Mexico, each antenna is built to collect low-energy radio waves. ALMA helps us understand all sorts of objects in the universe that are hard to see in visible light, like the centers of galaxies and the dusty planet-forming disks around young stars. It also allows us to look further back in time at light that can be as old as the universe itself. 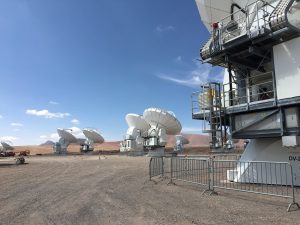 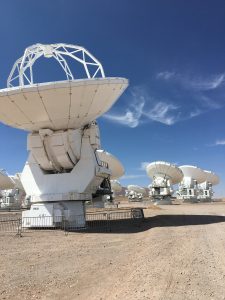 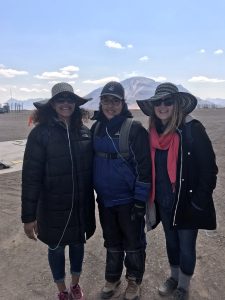 Detecting radio wavelengths of light is hard to do in most parts of the world, but it is critical to understanding our universe. ALMA is located in a high, dry spot where radio light can better penetrate the Earth’s atmosphere, so ALMA can observe the radio light better. Being near these antennas, so high up in the atmosphere, can fill you with a sense of wonder (and potentially dizziness if you forget to take deep breaths!). The fact that humans are able to build such precise but gigantic structures, that probe the far reaches of the universe, is mesmerizing to me! And many of the humans that made it possible were those I met during my time at ALMA. It might have been my favorite part of the experience, though seeing the actual observatory is a close second.

As an astronomy educator, I often hear the misconception that “astronomers are the only people who work at observatories.” In fact, astronomers are just a small portion of the multitude of professionals it takes to run a successful site like ALMA! There are engineers, computer scientists, paramedics, safety staff, administrators, educators, and more. Every one of these jobs is integral to the work done at ALMA. I was able to meet representatives from almost every role, including many of the women working across ALMA.

Meeting women who are thriving in this field is more of an exception than the norm, and to hear about their experiences and see their impact was truly inspiring. As a young woman collaborating with many in STEM careers, I know the importance of watching other women succeed in your field. Visiting ALMA and meeting these professionals inspired me to share their stories and the work of ALMA with visitors at the Smithsonian’s National Air and Space Museum, in the hope that women and girls here may be inspired to reach for the stars – and if they make it to ALMA, they get a 5,000-meter head start!