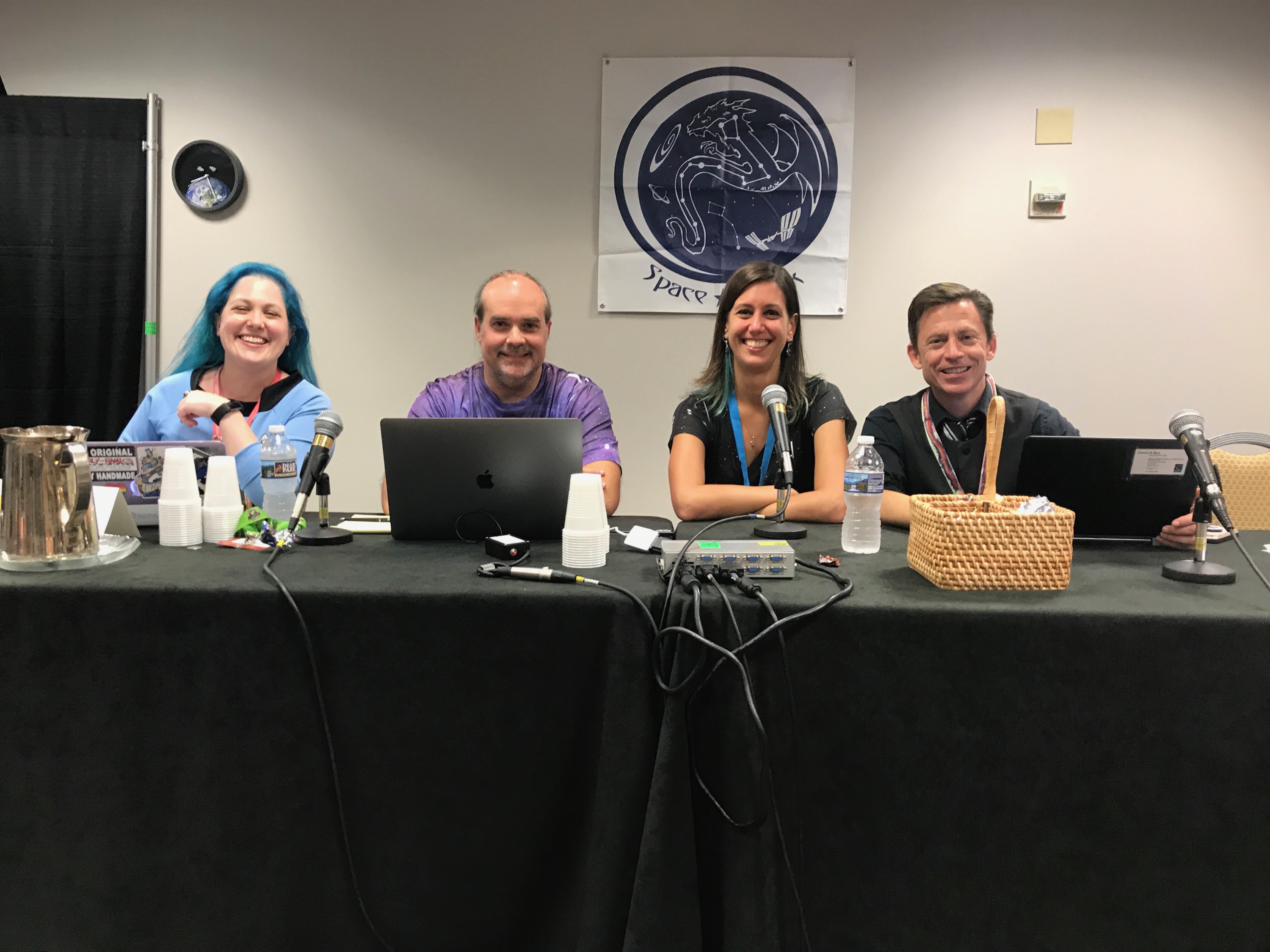 Superheroes, archenemies, actors, and animated characters galore… what do they have in common with dark matter, star formation, and radio astronomy? At Dragon Con, quite a bit, it turns out.

Earlier this month, nearly 85,000 people descended on downtown Atlanta to attend an annual celebration of all things “geek.” It’s called Dragon Con and it’s one of the largest science fiction, gaming, and fantasy gatherings in the country.

Remarkably, amid the tens of thousands of cosplay enthusiasts, authors, actors, artists, and fans, there has emerged a strong and dedicated cadre of people excited to learn about the latest scientific developments in astronomy, physics, chemistry, and biology. And, for the second year in a row, NRAO was there sharing the exciting discoveries of radio astronomy.

It seems intuitive that many science fiction fans also harbor a strong fascination with all things science and astronomy. The ties run deep.

Long before the first satellites were launched and humans traveled into Earth’s orbit (and just a little bit beyond), science fiction writers were dreaming about the wonders of space exploration. Some, like Arthur C. Clarke, even used science fiction to propose future technologies. In his 1952 novel “Islands in the Sky,” Clarke explored the idea of a world connected by communications satellites in geosynchronous orbit – something that occurred to him when he served as a talk-down radio operator during World War II.[1]Though prescient in the impact and implications of such a technology, Clarke, however, greatly overestimated the amount of time it would take to achieve such a feat. At the time of writing, communication technology required vacuum tubes, which had the irritating habit of burning out, a problem that would also occur in space. For a communication satellite to work, people had to be stationed onboard the satellite to routinely replace those pesky vacuum tubes.

Bob Noyce and Jack Kilby, with the invention of the monolithic integrated circuit, hastened the realization of Clarke’s vision by doing away with the need for vacuum tubes. And voilà, communication satellites no longer needed to be habitable, meaning they could be smaller, cheaper, and technologically in reach much sooner! It wasn’t long before engineers John Pierce and Harold Rosen spearheaded the development of Telstar, the first active communications satellite, and SYNCOM I, the first geosynchronous communications satellite, respectively.

With more than 5,000 hours of imaginative and entertaining programming at Dragon Con, the conference’s Space talks and Science presentations amass a dedicated and significant following. The audience members are a mix of scientists, engineers, academics, families, and other science-interested con-goers.

In 2018, for the second year in a row, I have been a part of this programming, sharing some of the latest discoveries in radio astronomy and astrophysics as part of three engaging panel discussions that covered a wide range of topics.

The first panel, titled What’s Exploring the Universe? Launches, Telescopes, & Ongoing Surveys, presented a surprisingly thorough overview of the wide range of astronomical observatories that are currently in service as well as several planned space and ground-based missions. My fellow panelists Tabetha Boyajian (of Tabby’s Star fame) and William Keel, mostly covered space-based observatories, with a special focus on Kepler and JWST. I discussed some of the most intriguing and productive ground-based facilities, including the VLA, ALMA, VLBA and the emerging plans for the Next Generation VLA! I also shared some details on planned optical/IR telescopes, like TMT and the E-ELT.

The next panel was an in-depth overview of ALMA’s “sweet spot” in research – protoplanetary disks, or as the program referred to it, Infant Stars & Baby Planets: Sex Talk for Solar Systems. Though a quirky title, my fellow panelist Nicole Gugliucci (aka “The Noisy Astronomer”) and I reviewed ALMA’s amazing capabilities in advancing our understanding of the planet- and star-formation process. Showcasing evocative images, including the famed HL Tau image, we took a standing-room-only audience through the various stages of solar system development and presented some of ALMA’s latest discoveries.

The final panel took place rather late in the day. You would think that by 8:30 in the evening, most con-goes would be off to parties, movies, or other light forms of entertainment. Nope. Once again, we were able to fill a conference room by talking about a suitably dark topic: Can’t See, Sense or Interact With It, But Dark Matter Holds the Universe Together. Other panelists included Nicole Gugliucci, Roy Kilgard, and Steph LaMassa. As we explained to the audience, the subject of dark matter is “murky” on a real and figurative level. The panel covered the history of dark matter research, including some of the most compelling observations that made the case for a dark-matter dominated universe. ALMA’s contributions to this, including the impact of dark matter on gravitational lensing, presented some of the latest examples of dark matter research. We also discussed the dearth of experimental evidence for a dark-matter particle; for something we’re sure is there, it’s been somewhat frustrating that science’s best efforts to identify the culprit for dark matter have been thwarted.

BRINGING SCIENCE TO THE PUBLIC

Dragon Con is not the only pop-culture gathering to have a strong science thread running through it. Earlier this year, I gave an hour-long talk at the Farpoint science fiction convention in Baltimore, and NRAO is a regular participant in Shore Leave, the largest fan-run science fiction conference in the country. Both have science programming for the entire three days of the conventions.

Now all I need to focus on is costume ideas for 2019. In the words of the pioneering comic visionary Stan Lee, “Excelsior!”

[1]Details I learned in personal email exchanges with Clarke in the year 2000.