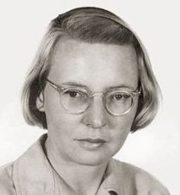 Ruby Payne-Scott was born on May 28, 1912 in Grafton, New South Wales. She began her college career at Sydney University at the age of 16 and graduated with honors in 1933 with degrees in physics and math. She finished her master’s degree in 1936 in physics, while working on a project at the Cancer Research Institute at Sydney University.

Ruby Payne Scott was part of an extraordinary group of radar scientists during the second world war that paved the way for the new field of radio astronomy. May 28, 2019 would have been her one hundred and seventh birthday.

In 1939, the year Australia joined the war effort, with the United Kingdom against Germany, Ruby Payne Scott was hired as a librarian at Amalgamated Wireless in Sydney, despite having a masters in physics and expertise in electrical engineering. Soon thereafter, the company realized that her skill set would be useful in the design and development of equipment and promoted her. Eventually, she became bored with this work and looked for a job that would align better with her expertise.

World War II increased economic and professional opportunities for women in places like the armed forces, but the war effort in Australia strengthened the job prospects for women who had had the chance to attain advanced college degrees in the physical sciences. According to Miller Goss, the author “Making Waves,” a biography of Payne-Scott published in 2010, “in 1938 women worked mainly as teachers, even if they happened to have advanced degrees in physics and mathematics.”

In 1941, Ruby applied to the Australian Council for Scientific and Industrial Research (CSIR) and was hired to work at their top-secret radar lab— the division of Radio Physics, a nom de guerre created to hide the real purpose of their work. Ruby was one of three women to work at the lab, and she stood out from everybody with her intelligence, unconventional sartorial choices and propensity to smoke cigarettes in non-social settings. She was assigned to work on military applications for radar from 1941 to 1945, becoming an expert on PPI detection of aircraft (plan position indicator is the radar screen you see in the movies), until the war ended in 1945.

Radar is used to detect the presence (direction, distance, and speed) of aircraft, ships, and other objects. It can do this by sending out pulses of high-frequency radio waves that are reflected off the object back to the source. Radar was used extensively by all divisions of the armed forces in World War II as an early warning detection system for aircraft.  If you were a physicist during the war effort, you were either working on the atomic bomb or honing the effectiveness of radar detection. But radar antennas can also be used as radio telescopes as physicists and engineers discovered toward the end of the war.

The war’s ending happened to coincide with a burst of solar activity that was picked up by scientists using recently decommissioned radar equipment. A large sunspot cycle was beginning— what would turn out to be a boon for budding radio astronomers like Ruby. One of her collaborators, Joe Pawsey, decided to use these retired antennas to observe phenomenon like the kind Karl Jansky had discovered coming from the center of our galaxy in the 1930s.

One day in 1946, on Australia Day, the 26th of January— it was the same date in 1788 when Captain Philip landed in Sydney with the first group of convicts— Ruby was observing the sun near sunrise. It was dark— this radio sun she observed would rise before the optical one (for the technically-minded, radio refraction is 1 degree at the horizon and optical refraction is at 0.5 degrees). With this observation, she detected huge signals from the sea cliff interferometer, a type of radio telescope she had co-designed with Joseph Pawsey. It was determined that these signals were coming from a small source on the sun!  And it was the first time scientists realized that these bursts were correlated with a giant sunspot.  This work led to her discovery of solar flares—type I and type II solar bursts that would later help scientists understand the nature of space weather and the disruption it can cause on Earth. Research on solar flares and the radio emissions from them would be used to warn of incoming solar storms that have the potential to threaten our technological infrastructure.

Payne Scott had to hide her marriage in 1944 to Bill Hall to work full-time as a scientist and was forced to “retire” from the field in 1951, when she got pregnant with her first child. Secretly, her colleagues like to refer to her as “Red Ruby” for her reputed ties to the communist party, but also for her activism in promoting equal rights for women. Later, she became a schoolteacher, greatly admired by her students who never learned of her significant scientific achievements.  In 1981, Ruby died at the age of 68 of complications from Alzheimer’s disease.

To read more about this extraordinary scientist, see Miller Goss’s Making Waves: The Story of Ruby Payne Scott, Australian Pioneer and Radio Astronomer, and a recently published obituary in the New York Times.