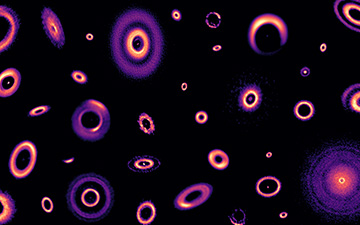 On a clear dark night, the plane of our Galaxy can be seen arching overhead, filled with bright stars and dark clouds of dust. These dark clouds are nebulae, which provide the material for new stars to form by gravitational collapse. Such a collapse produces a young star surrounded by a rotating disk of gas and dust in which new planets are forming. Observing such disks is incredibly challenging – they are roughly the size of a donut viewed from 10 miles away, and their dust grains mostly emit radio waves invisible to the human eye. However, the 66 antennas of the Atacama Large Millimeter/Submillimeter Array (ALMA) can provide the powerful magnification and sensitivity astronomers need to observe their structures. This gallery shows 37 images of such dust disks around nearby young stars observed by ALMA. The beautiful variety of gaps, rings, and arcs are thought to be caused by unseen young planets sculpting the dust in the disk along their orbits. By studying these dust structures, astronomers learn how and when planets form and gain insight into the origins of our own solar system — Logan Francis.

It’s not often that a scientist explains a complicated astrophysical observation to the public AND creates his own artwork to accompany it. In February 2020, Logan Francis, a graduate student at the University of Victoria, published a scientific paper on transition disks from an observation he made using ALMA Observatory. Transition disks occur at a certain stage in the planet formation process, and the ALMA radio telescope provides an essential window into the details of planet formation. I asked him a few questions about his artwork and a bit about the science he does.

How was the artwork created?
I processed the radio data from ALMA Observatory using an algorithm built into a specialized astronomy software program to make FITS images (FITS files are the most commonly used digital file format in astronomy). I then used a combination of programs and math (python+matplotib+astropy) to read the image data and create graphic images for each disk. Finally, everything was assembled into a gallery using google slides.

Your art highlights 37 images but the science paper includes 38 images. What happened to disk #38?
Good catch – this is an interesting case. I excluded it from the gallery image intentionally. A radio interferometer like ALMA can’t recover smooth and extended features of an image unless there are enough antennas in the array spaced closely together. In all of the other images, there were enough short-spacing antennas, but these were missing for the observation of disk 38. Consequently, the outer disk looks very faint and washed out, even though it is actually very bright. I excluded this disk from the gallery since its appearance is strange due to this imaging artifact and because it is not representative of what it really looks like.

About the Scientist: Logan completed his BSc in physics at Saint Mary’s University before starting his Ph.D. studies at the University of Victoria with Doug Johnstone (NRC/HAA). Logan primarily works on studies of accretion variability in low mass protostars and the interior structures of gapped protoplanetary disks using ALMA. His other research interests include astrochemical studies of disks and improving techniques for mm flux calibration and interferometric imaging.