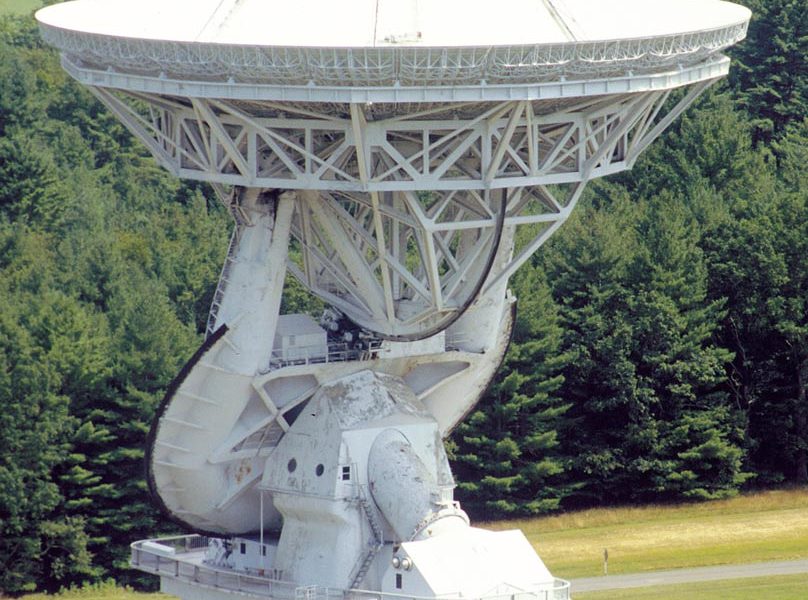 Credit: NRAO/AUI/NSF
Today the Governor of West Virginia Earl Ray Tomblin recognized the 50th Anniversary of the National Radio Astronomy Observatory’s 140-foot radio telescope. The governor’s proclamation was read at the NRAO in Green Bank as part of the 50th anniversary celebration of this iconic telescope, which is regarded as one of astronomy’s trailblazing instruments.

The proclamation states: “The 140-foot radio telescope […] helped lay the cornerstone of modern astronomy, and is internationally recognized for its unprecedented design and contributions to our understanding of the Universe.”

The 140-foot telescope was inaugurated in 1965 and retired from routine observations in 2001 to make way for the 100-meter Robert C. Byrd Green Bank Telescope (GBT), the world’s largest fully steerable radio telescope. During its 36 years as one of the premier instruments at Green Bank, the 140-foot telescope helped to launch the fledgling field of astrochemistry, revealed key details about the nature and composition of galaxies, and provided insights into the potential for life elsewhere in the cosmos.

Though no longer used for routine scientific observations, the 140-foot telescope still supports astronomical research through its current mission as one of only two Earth stations for the RadioAstron satellite – the farthest element of an Earth-to-space-spanning radio telescope system.

“This instrument is truly part of the history of science,” said Green Bank Site Director Karen O’Neil. “We are delighted that it can still have such an important role to play in our exploration of the cosmos.”

Planning for the telescope began in 1955 even before the NRAO was founded. At that time, some of the nation’s leading scientists and engineers set out to design, build, and operate an “exceptional radio telescope for the nation’s astronomical community.” Construction began in 1958 and the final telescope components arrived at the NRAO in 1964. The main construction was completed in February of 1965, allowing astronomers and engineers to align and test the instrument before its commissioning and start of routine operations.

“The 140-foot telescope set the stage for modern radio astronomy,” noted O’Neil. “We are heartened that on its 50th anniversary Governor Tomblin has recognized its contributions and the pride the people of West Virginia should take in its continued service to exploring the unknown.”
Tours of the Green Bank site are offered year round, allowing the public up-close views of the 140-foot telescope and the other telescopes at Green Bank that opened new frontiers of discovery and continue to unlock the mysteries of the Universe.

Some select scientific highlights and key discoveries from the telescope include:

1. Detection of Ionized Gas: The 140-foot telescope made the first unambiguous detection of recombination lines at radio frequencies, which are powerful tools for studying ionized gas in the Milky Way Galaxy. This includes ionized hydrogen (HII), which is a major constituent of galaxies and seen in star-forming regions.

2. Astrochemistry & Molecular Spectroscopy: During its years of science observations, the 140-foot telescope detected nearly one half of all known molecules that naturally radiate at centimeter wavelengths. Two significant discoveries include formaldehyde (H2CO), which was the first organic polyatomic molecule ever detected in the interstellar medium. Later, astronomers detected cyanoacetylene (HC3N), the first long-chain molecule detected in the interstellar medium, demonstrating that complex molecules could exist in space. The telescope continued to play an important role in identifying and studying other organic molecules.

3. Studies of Neutral Hydrogen: Neutral hydrogen (HI) is used to probe the otherwise invisible regions of the Milky Way and other galaxies. Extensive HI observations of the Galactic center were used to develop a bar-like model for the inner Galaxy. Also, a region in the northern sky with a marked dearth of HI was discovered. It is used as a window to study extragalactic objects at UV and X-ray wavelengths.

4. VLBI: The 140-foot has been a pioneer in the field of Very Long Baseline Interferometry in the United States. The first successful independent local oscillator recording interferometer experiment in the United States used the 140-foot and 85-1. The telescope also was part of observations that unambiguously showed the apparent superluminal expansion of 3C273, which is one of the most important discoveries made by VLBI techniques.

6. Star-formation Studies: Astronomers using the 140-foot discovered a highly unusual, massive interstellar cloud that appears poised to begin a burst of star formation. The cloud may be the first ever to be detected in the transition between atomic and molecular states. 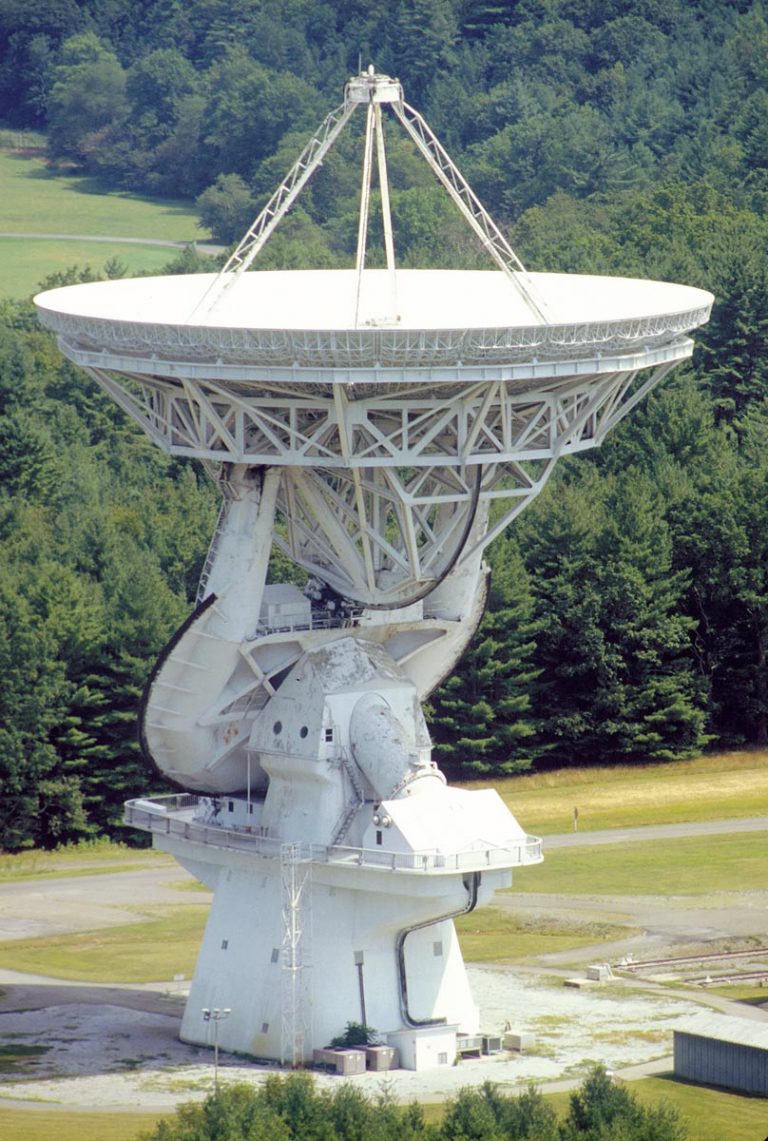 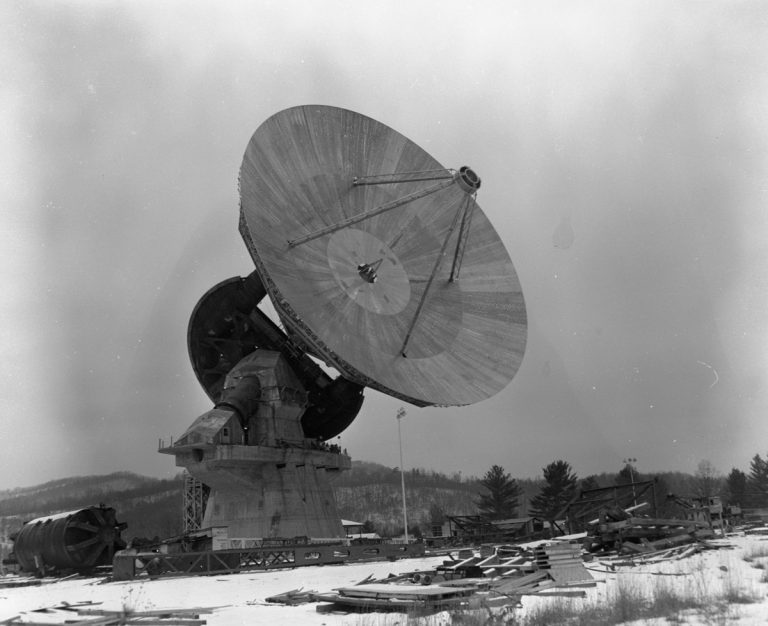 The first "slew" or side-to-side motion of the 140-foot telescope as seen in 1965 after the last aluminum panels were installed. The telescope celebrates its 50th anniversary on Oct. 13, 2015.
Credit: NRAO/AUI/NSF 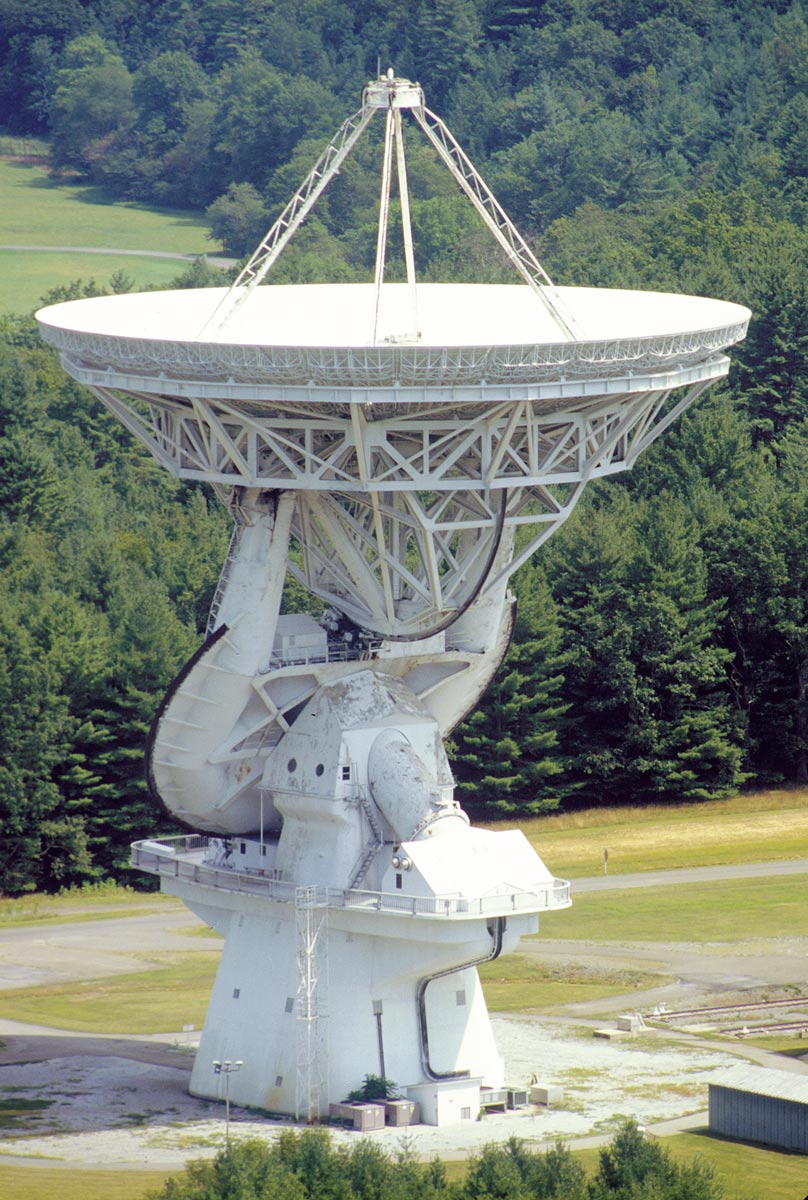 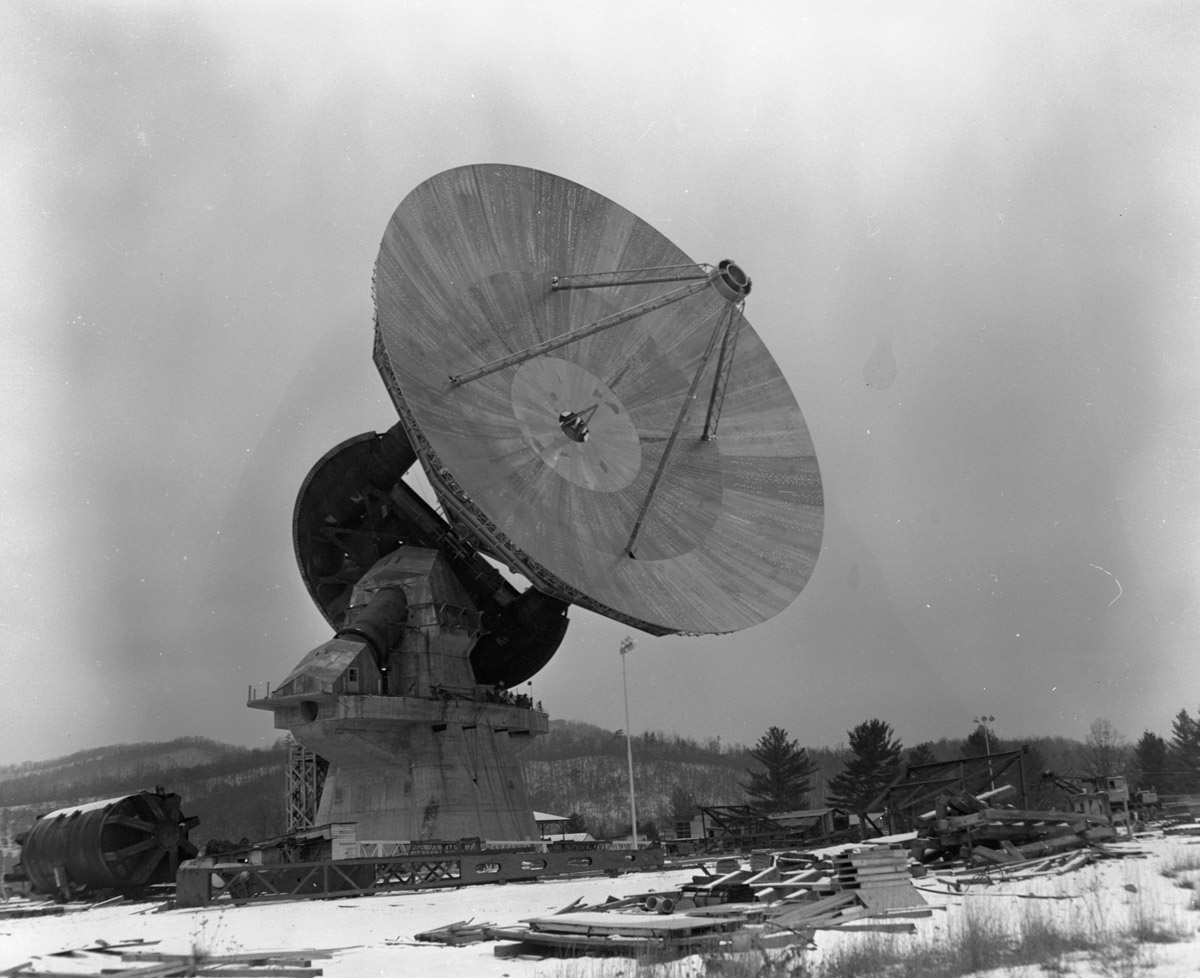