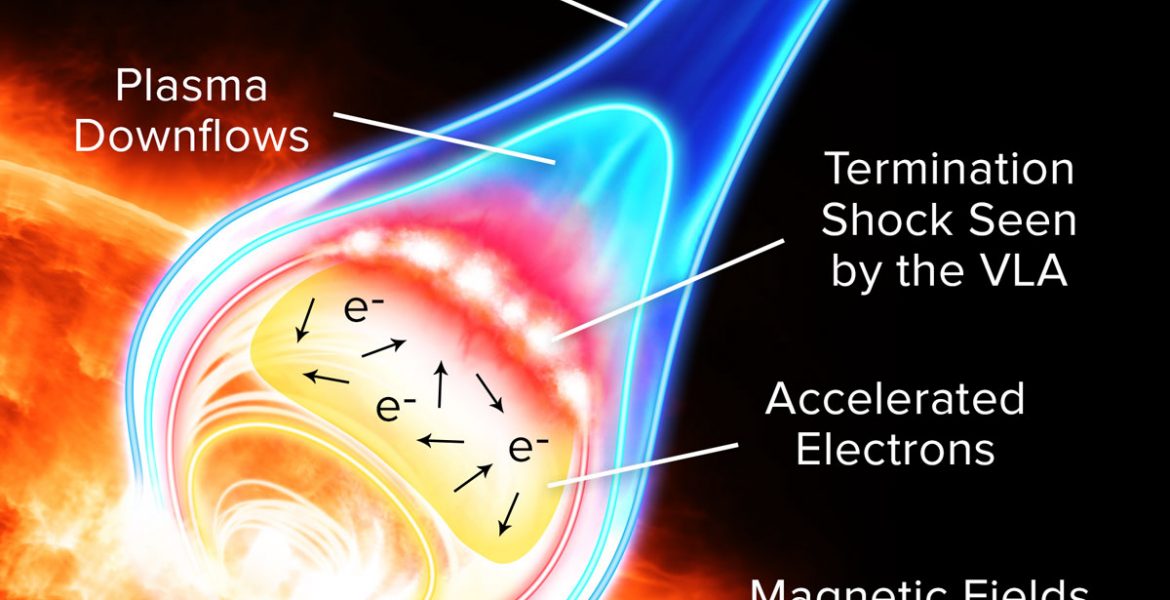 Astronomers have made a significant step toward confirming a proposed explanation for how solar flares accelerate charged particles to speeds nearly that of light. This important advance was made possible by the new capabilities of the National Science Foundation’s Karl G. Jansky Very Large Array (VLA) radio telescope.

Solar flares, the most powerful explosions in the Solar System, can accelerate large numbers of charged particles to nearly the speed of light. How they do that, however, has been uncertain.

“It has been thought that a specific type of shock produced by solar flares could be responsible for accelerating these particles, but there has been no convincing observational evidence for this mechanism. Now, using the raw power of the upgraded VLA, we have a fundamentally new result that strongly supports this shock acceleration scenario,” said first author of the study, Bin Chen, of the Harvard-Smithsonian Center for Astrophysics.

Solar flares are powerful eruptions that often are associated with coronal mass ejections that throw huge amounts of material out from the Sun. Scientists think they are produced by the sudden release of energy when strong magnetic fields reconfigure themselves and reconnect. Researchers were unclear, though, how such magnetic phenomena could propel the high-speed charged particles that emerge from the eruptions.

The new VLA observations support the idea that the acceleration occurs in a region of the flare where fast plasma flows caused by the violent energy release impinge on dense magnetic loops and form a stationary shock, called a “termination shock.” Electrons are repeatedly pummeled by the shock into higher and higher speeds. The VLA results closely match computer simulations that produce such a phenomenon.

The scientists used the VLA, along with other telescopes at ultraviolet and X-ray wavelengths, to study a flare that erupted on 3 March 2012. The VLA produced radio images from a broad range of radio frequencies and in time slices of only 50 milliseconds each. The researchers were able to determine that short-lived bursts of radio waves coming from energetic electrons were occuring where the termination shock was expected to be, according to the computer simulations. Other details further supported the termination-shock acceleration model.

“These new insights are a significant step forward in our understanding of particle acceleration, which is not only an important aspect of solar flares, but also a fundamental physical process occurring throughout the Universe,” Chen said.

The VLA was constructed during the 1970s and dedicated in 1980. From 2001 to 2012, the VLA was upgraded to incorporate advanced technology that had been developed since its dedication. Now returned to the technological state of the art, the VLA provides scientists with research capabilities vastly improved over its original design.

“The recently upgraded capabilities of the VLA were absolutely essential in establishing this finding,” said co-author Timothy Bastian, of the National Radio Astronomy Observatory. 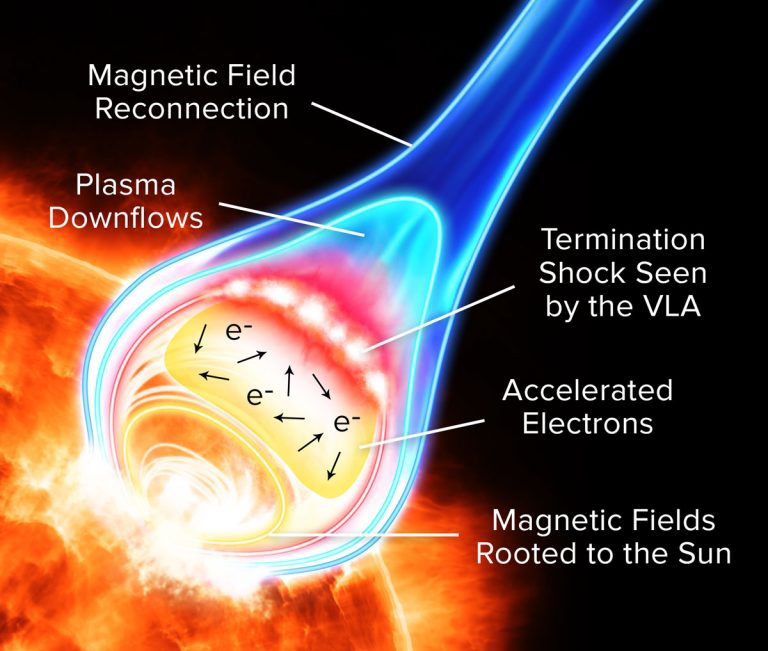 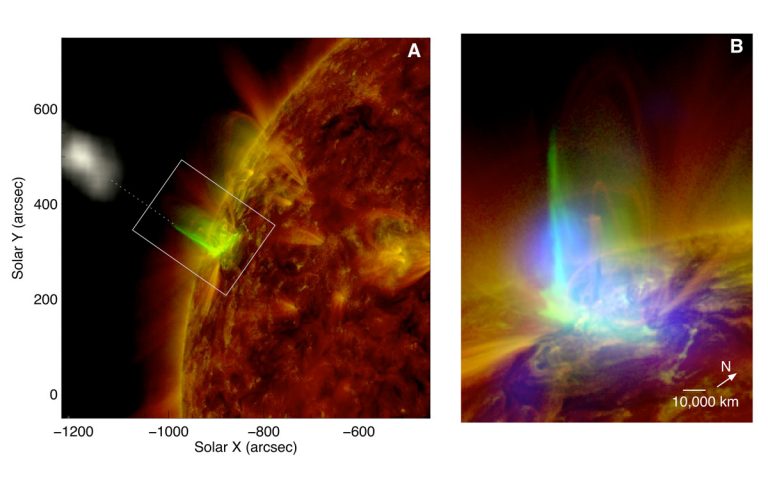 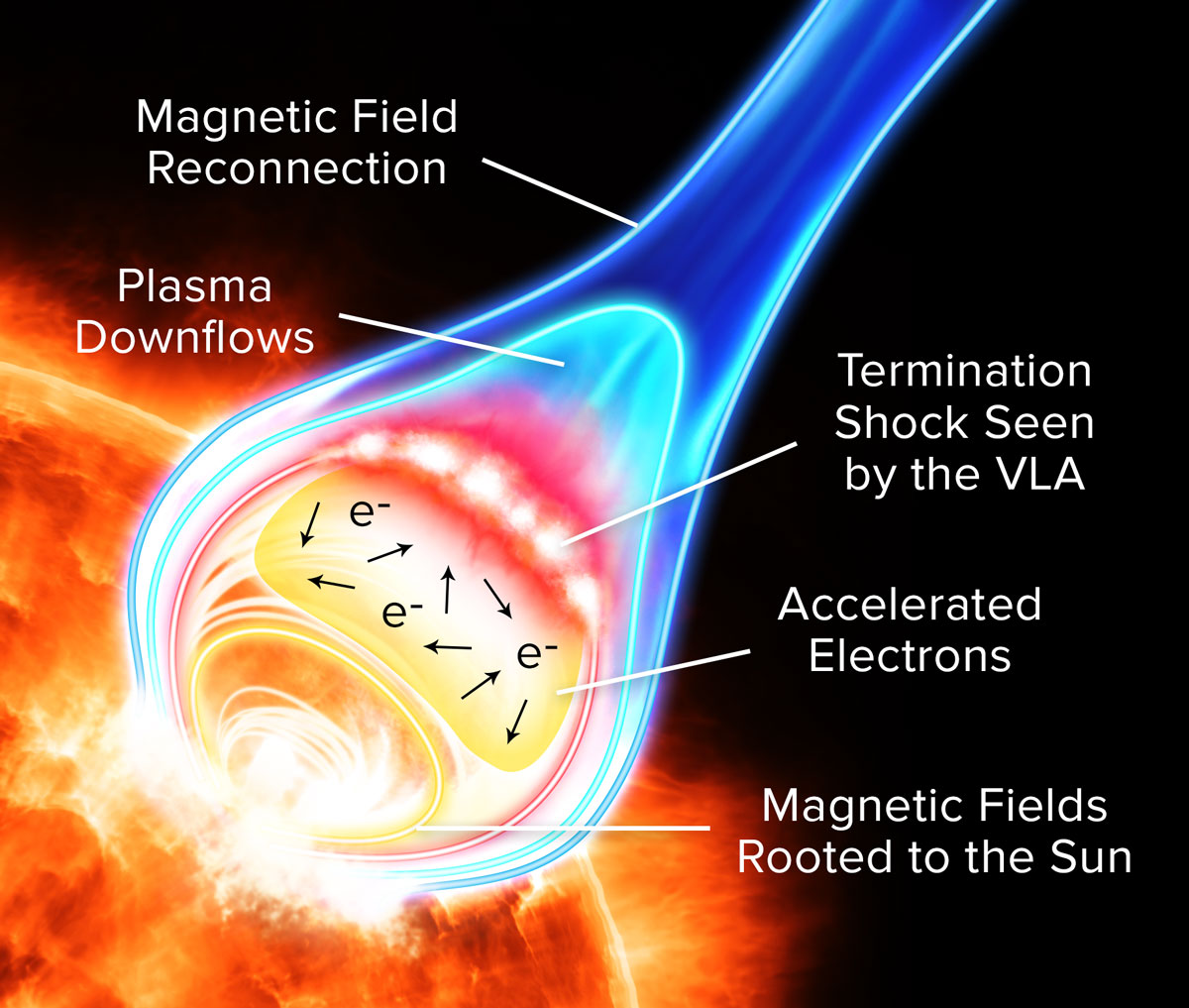 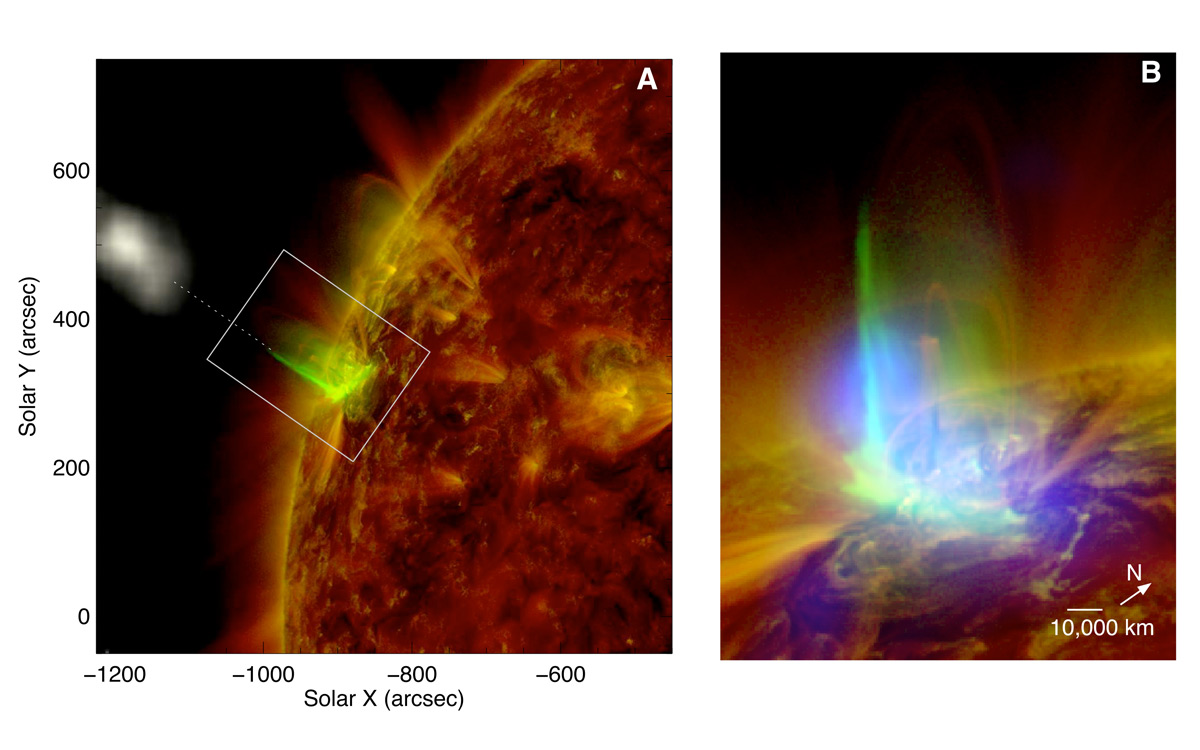