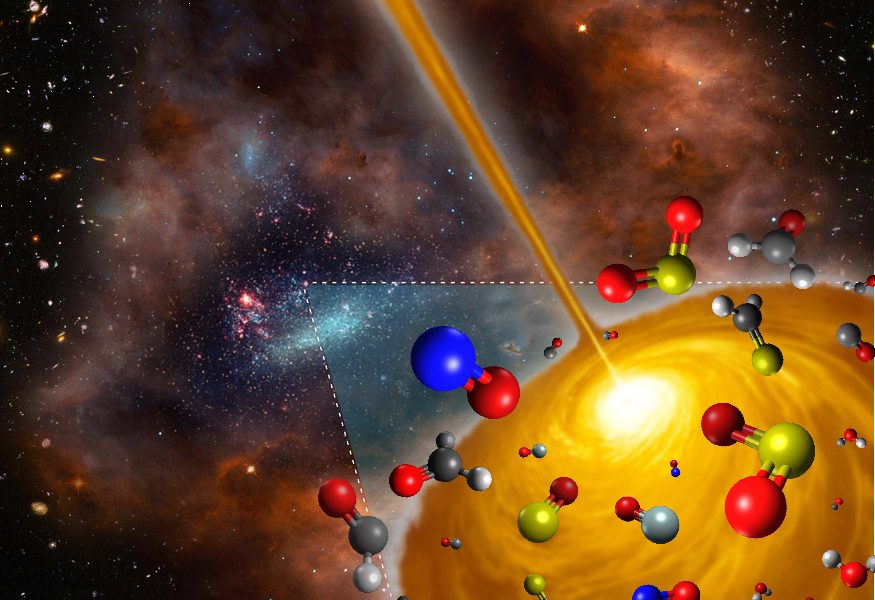 Credit: FRIS/Tohoku University. The figure is a derivative work of the following sources (ESO/M. Kornmesser; NASA, ESA, and S. Beckwith (STScI) and the HUDF Team; NASA/ESA and the Hubble Heritage Team (AURA/STScI)/HEI).

Astronomers have discovered something never before seen outside of our galaxy – a freshly forged star still encased in its hot, glowing envelope of star-forming material, a feature astronomers refer to as a “hot molecular core.”

Using the high-resolution capabilities of the Atacama Large Millimeter/submillimeter Array (ALMA), a team of Japanese researchers peered inside the Large Magellanic Cloud (LMC), a nearby dwarf galaxy that orbits the Milky Way, and discovered a concentrated region of hot, dense molecular gas, the hallmark of a newly ignited star still encased in its birthing cocoon of dust and gas.

The ALMA observations reveal that this newly discovered object in the LMC has a very different chemical makeup than similar objects found in the Milky Way.

The chemicals detected in the LMC include sulfur dioxide, nitric oxide, and the organic molecule formaldehyde. Hot molecular cores in our own galaxy are more likely to contain a wider assortment of complex organic molecules, such as methanol and ethanol.

The research team suggests that the unique galactic environment of the LMC affects the formation processes of molecules around a newborn star, which would account for the observed differences in chemical compositions.

“This is the first detection of an extragalactic hot molecular core and it demonstrates the great capability of new generation telescopes to study astrochemical phenomena beyond our galaxy,” said Takashi Shimonishi, an astronomer at Tohoku University, Japan, and lead author on a paper published in the Astrophysical Journal. “The observations have suggested that the chemical compositions of materials that form stars and planets are much more diverse than we expected.”

Stars form out of dense blobs of hydrogen gas sprinkled with a host of other molecules. Once enough star-forming material condenses under gravity, densities and temperatures reach the threshold needed to trigger nuclear fusion and a star bursts into life. Astronomers study the resulting hot molecular cores in the Milky Way – and now the LMC — to learn more about the early stages in the lifecycle of a star. They also want to understand how molecules, including complex prebiotic molecules, form in this environment.

It is not yet clear, however, if the large, complex molecules detected in the Milky Way exist in hot molecular cores in other galaxies. This newly discovered object in one of our nearest galactic neighbors is an excellent target for such a study, and further observations of extragalactic hot molecular cores with ALMA will shed light on the chemical complexities of our universe.

The paper “The Detection of a Hot Molecular Core in the Large Magellanic Cloud with ALMA” Shimonishi, et al. is published in the Astrophysical Journal [http://apj.aas.org]. 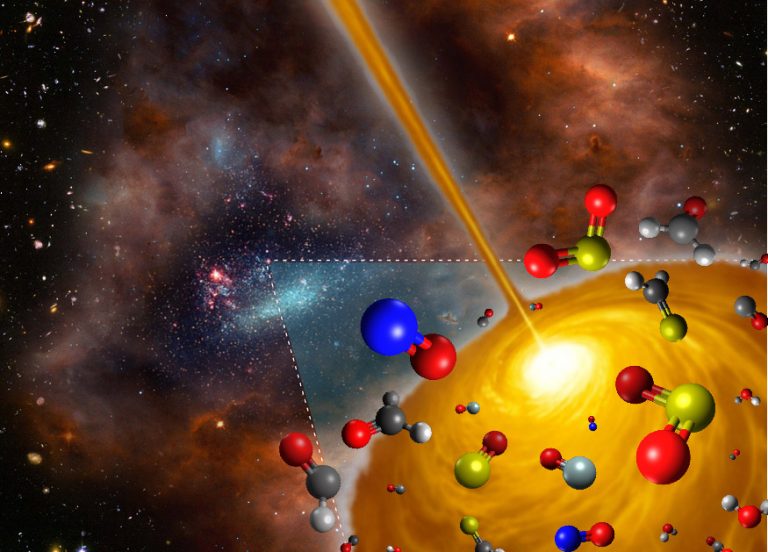 Artist's concept image of the hot molecular core discovered in the Large Magellanic Cloud.
Credit: FRIS/Tohoku University. The figure is a derivative work of the following sources (ESO/M. Kornmesser; NASA, ESA, and S. Beckwith (STScI) and the HUDF Team; NASA/ESA and the Hubble Heritage Team (AURA/STScI)/HEI). 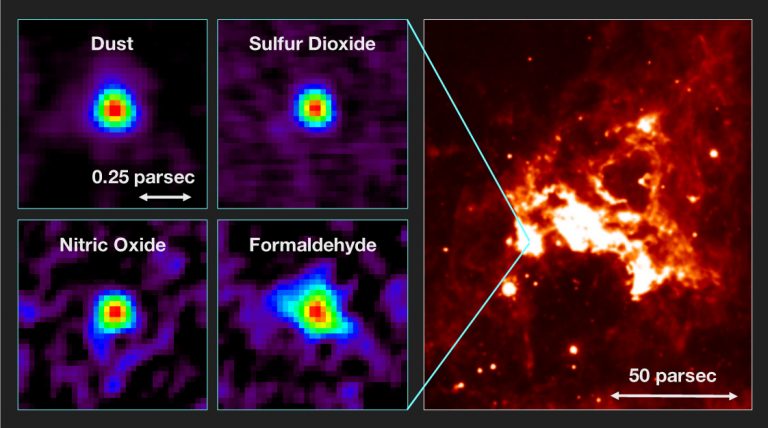 Left: Distributions of molecular line emission from a hot molecular core in the Large Magellanic Cloud observed with ALMA. Emissions from dust, sulfur dioxide (SO2), nitric oxide (NO), and formaldehyde (H2CO) are shown as examples. Right: An infrared image of the surrounding star-forming region (based on the 8 micron data provided by the NASA/Spitzer Space Telescope).
Credit: T. Shimonishi/Tohoku University, ALMA (ESO/NAOJ/NRAO) 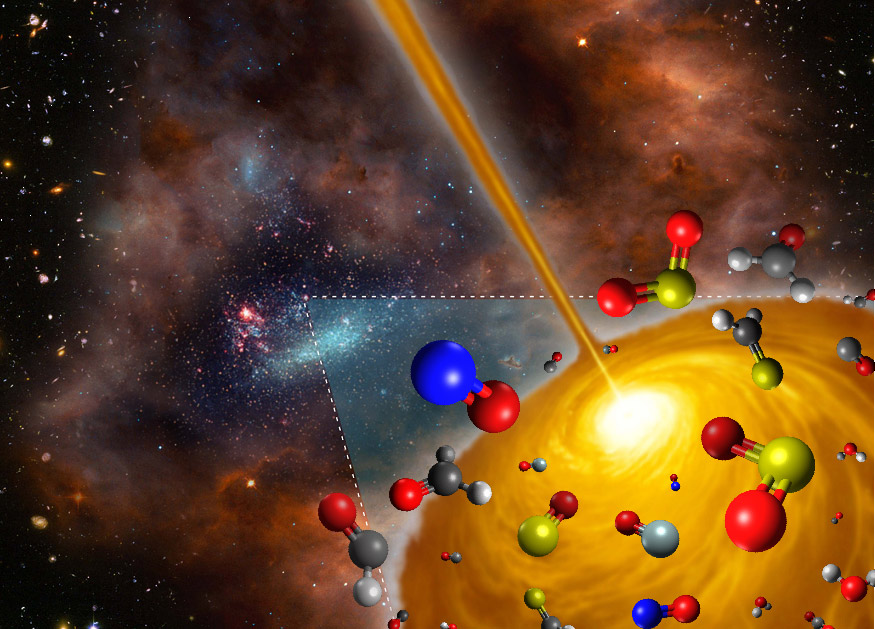 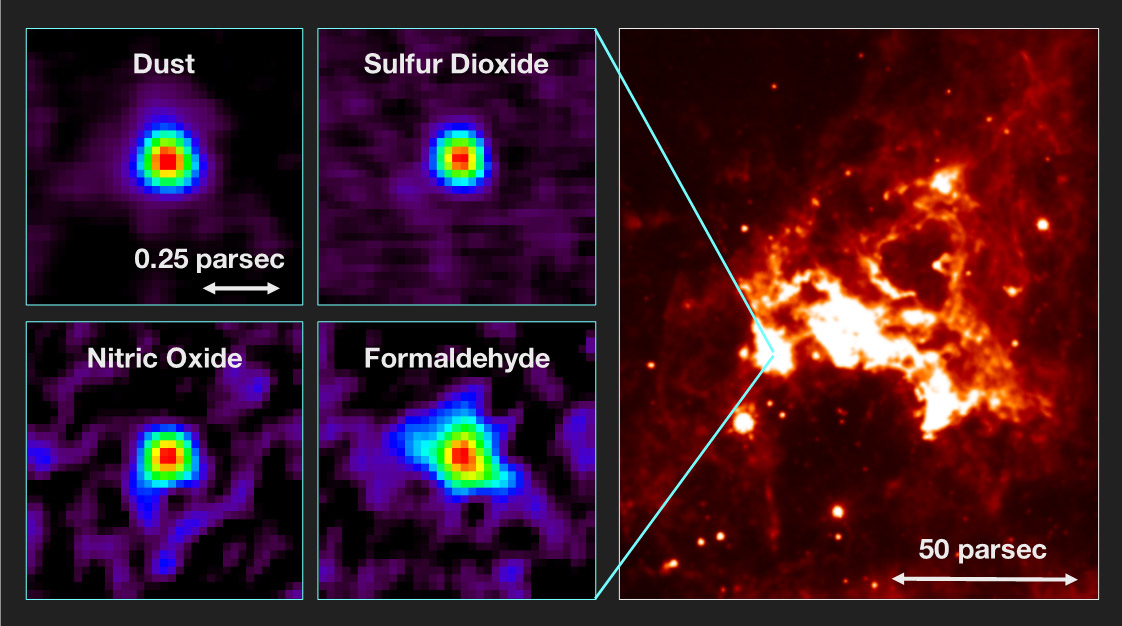