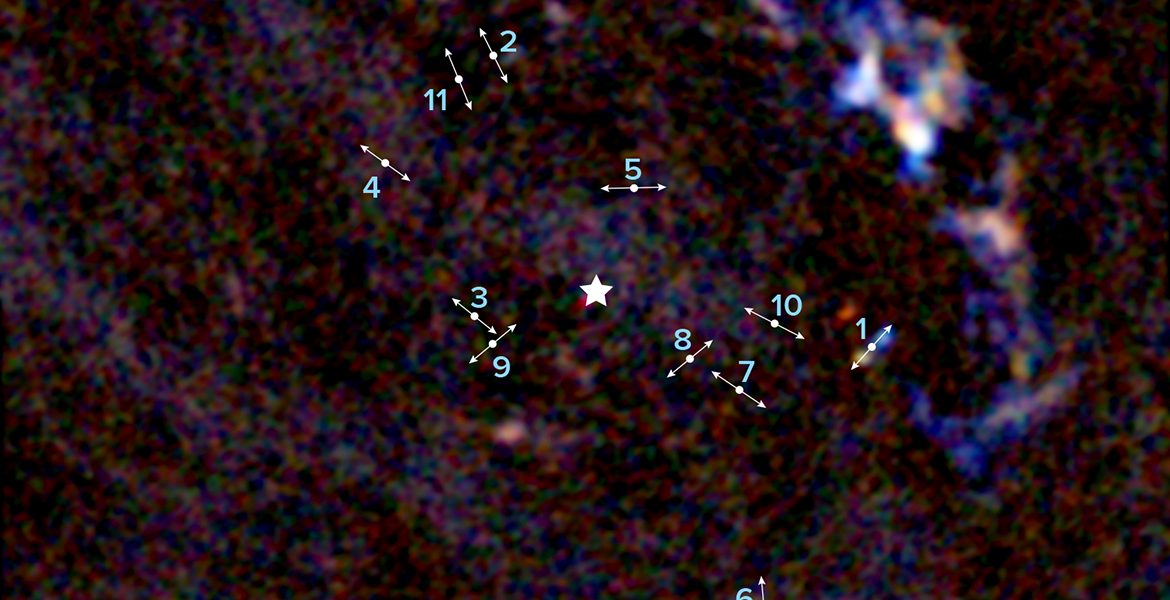 At the center of our galaxy, in the immediate vicinity of its supermassive black holeSupermassive Black HoleA black hole that has a million or as much as a billion solar masses. These large black holes lurk at the centers of most galaxies., is a region wracked by powerful tidal forces and bathed in intense ultravioletUltravioletElectromagnetic radiation at wavelengths shorter than the violet end of visible light. The atmosphere of the Earth effectively blocks the transmission of most ultraviolet light, which can be deadly to many forms of life. light and X-ray radiation. These harsh conditions, astronomers surmise, do not favor star formation, especially low-mass stars like our sun. Surprisingly, new observations from the Atacama Large Millimeter/submillimeter Array (ALMA) suggest otherwise.

The presence of these newly discovered protostars (the formative stage between a dense cloud of gas and a young, shining star) suggests that the conditions necessary to birth low-mass stars may exist even in one of the most turbulent regions of our galaxy and possibly in similar locales throughout the universe.

The results are published in the Astrophysical Journal, Letters.

“Despite all odds, we see the best evidence yet that low-mass stars are forming startlingly close to the supermassive black hole at the center of the Milky Way,” said Farhad Yusef-Zadeh, an astronomer at Northwestern University in Evanston, Illinois, and lead author on the paper. “This is a genuinely surprising result and one that demonstrates just how robust star formation can be, even in the most unlikely of places.”

The ALMA data also suggest that these protostars are about 6,000 years old. “This is important because it is the earliest phase of star formation we have found in this highly hostile environment,” Yusef-Zadeh said.

The team of researchers identified these protostars by seeing the classic “double lobes” of material that bracket each of them. These cosmic hourglass-like shapes signal the early stages of star formation. Molecules, like carbon monoxide (CO), in these lobes glow brightly in millimeter-wavelength light, which ALMA can observe with remarkable precision and sensitivity.

Protostars form from interstellar clouds of dust and gas. Dense pockets of material in these clouds collapse under their own gravity and grow by accumulating more and more star-forming gas from their parent clouds. A portion of this infalling material, however, never makes it onto the surface of the star. Instead, it is ejected as a pair of high-velocity jets from the protostar’s north and south poles. Extremely turbulent environments can disrupt the normal procession of material onto a protostar, while intense radiation — from massive nearby stars and supermassive black holes — can blast away the parent cloud, thwarting the formation of all but the most massive of stars.

The Milky Way’s galactic center, with its 4 million solar mass black hole, is located approximately 26,000 light-years from Earth in the direction of the constellation Sagittarius. Vast stores of interstellar dust obscure this region, hiding it from optical telescopes. Radio waves, including the millimeter and submillimeter light that ALMA sees, are able to penetrate this dust, giving radio astronomers a clearer picture of the dynamics and content of this hostile environment.

Prior ALMA observations of the region surrounding Sgr A* by Yusef-Zadeh and his team revealed multiple massive infant stars that are estimated to be about 6 million years old. These objects, known as proplyds, are common features in more placid star-forming regions, like the Orion Nebula. Though the galactic center is a challenging environment for star formation, it is possible for particularly dense cores of hydrogen gas to cross the necessary threshold and forge new stars.

The new ALMA observations, however, revealed something even more remarkable, signs that eleven low-mass protostars are forming within 1 parsec – a scant 3 light-years – of the galaxy’s central black hole. Yusef-Zadeh and his team used ALMA to confirm that the masses and momentum transfer rates – the ability of the protostar jets to plow through surrounding interstellar material – are consistent with young protostars found throughout the disk of our galaxy.

“This discovery provides evidence that star formation is taking place within clouds surprisingly close to Sagittarius A*,” said Al Wootten with the National Radio Astronomy Observatory in Charlottesville, Virginia, and co-author on the paper. “Though these conditions are far from ideal, we can envision several pathways for these stars to emerge.”

For this to occur, outside forces would have to compress the gas clouds near the center of our galaxy to overcome the violent nature of the region and allow gravity to take over and form stars. The astronomers speculate that high-velocity gas clouds could aid in star formation as they force their way through the interstellar medium. It is also possible that jets from the black hole itself could be plowing into the surrounding gas clouds, compressing material and triggering this burst of star formation.

“The next step is to take a closer look to confirm that these newly formed stars are orbited by disks of dusty gas,” concluded Mark Wardle, an astronomer at Macquarie University in Sydney, Australia, and co-investigator on the team.  “If so, it’s likely that planets will eventually form from this material, as is the case for young stars in the galactic disk.”

This research is presented in a paper titled “ALMA Detection of Bipolar Outflows: Evidence for Low Mass Star Formation within 1pc of Sgr A*,” by F. Yusef-Zadeh, et al., appearing in the Astrophysical Journal Letters [https://doi.org/10.3847/2041-8213/aa96a2].

This work is partially supported by the grant AST-0807400 from the National Science Foundation. 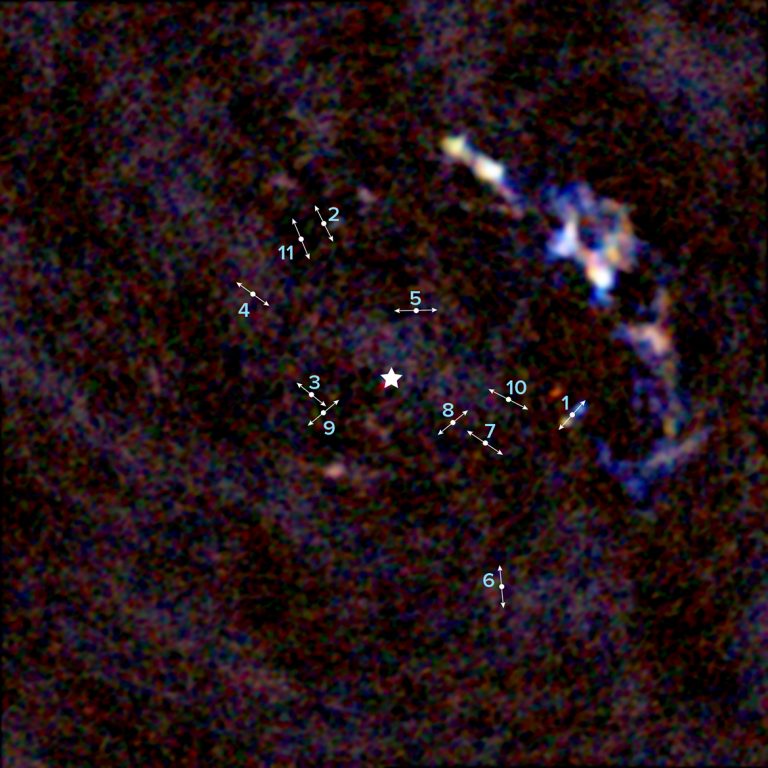 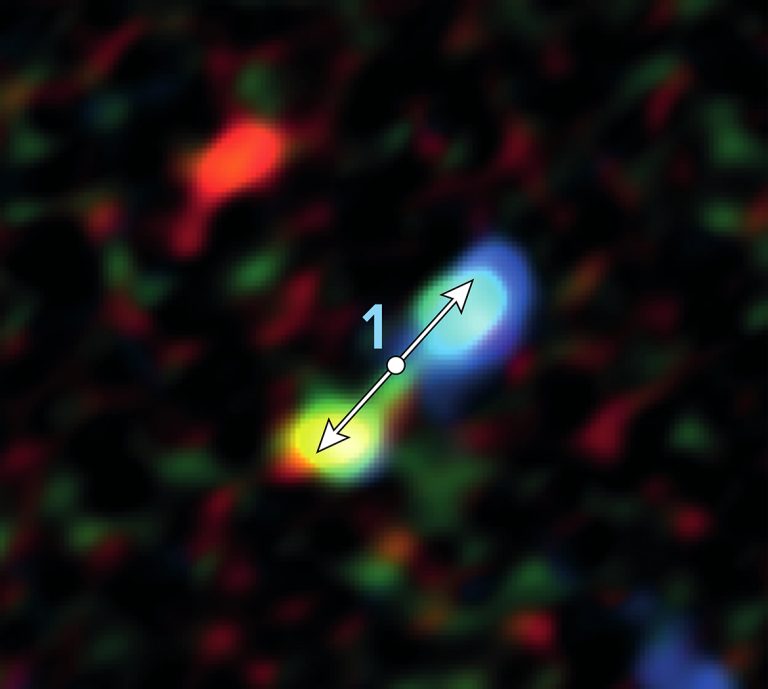 Infant stars, like those recently identified near the supermassive black hole at the center of...Read More
Credit: Bill Saxton (NRAO/AUI/NSF) 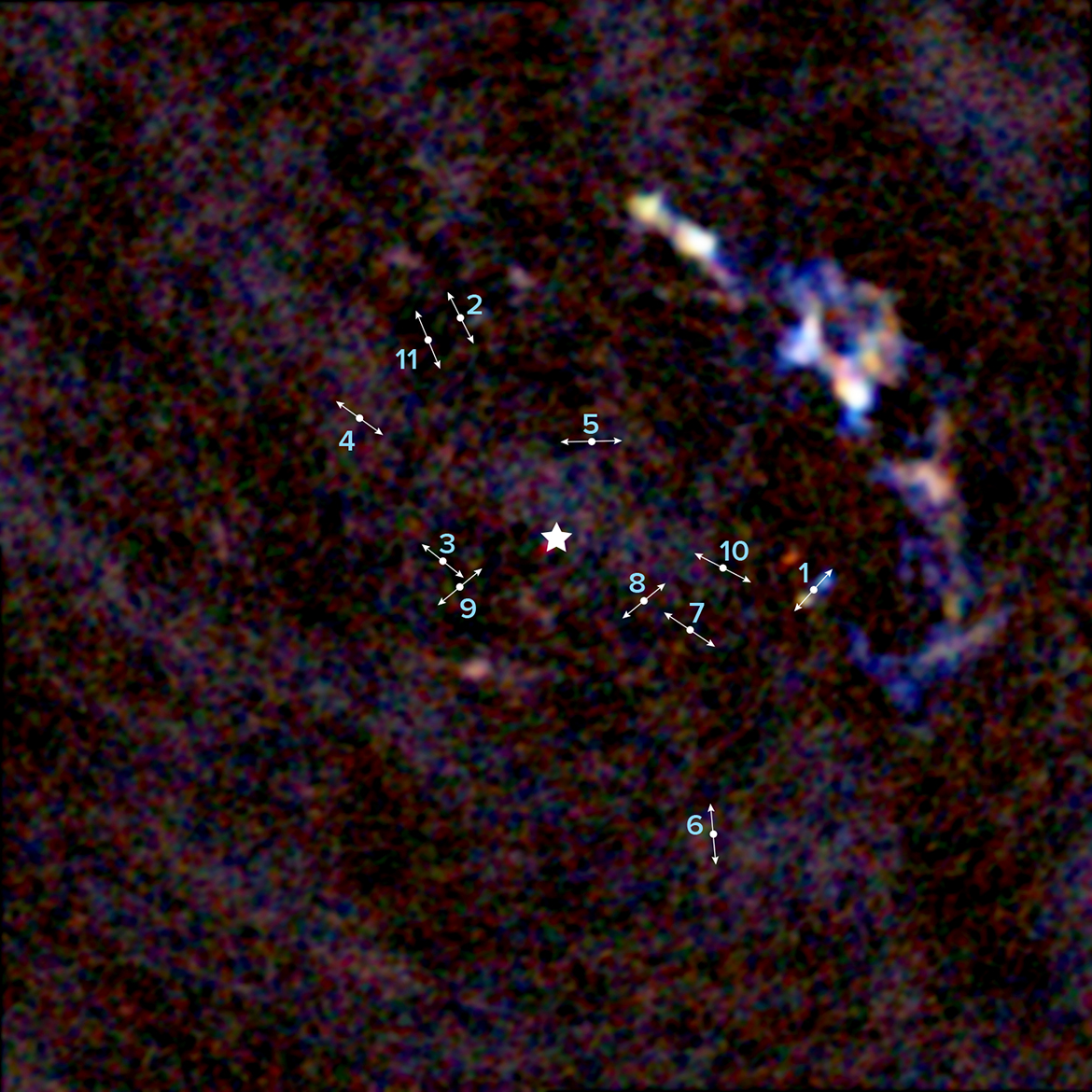 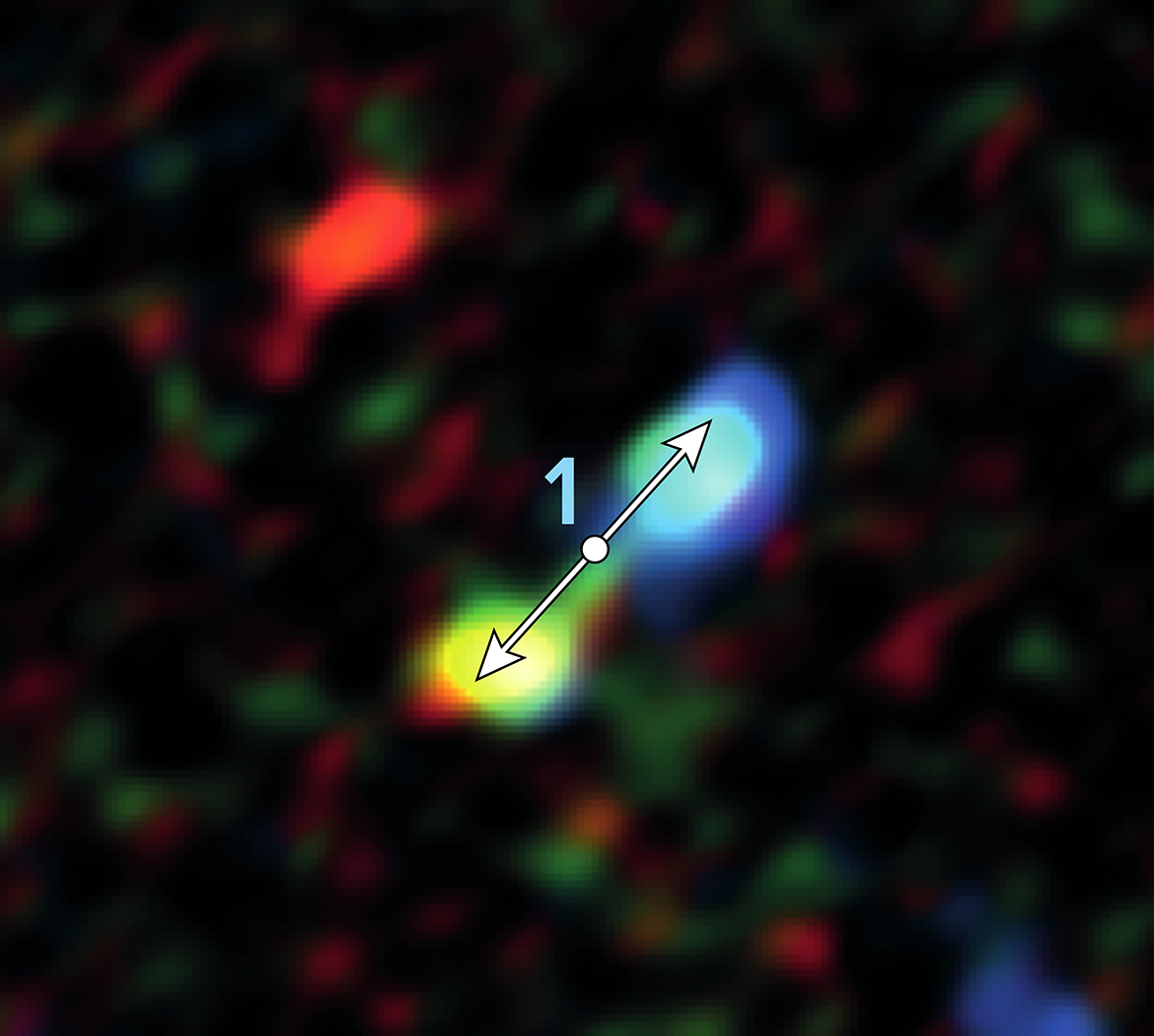