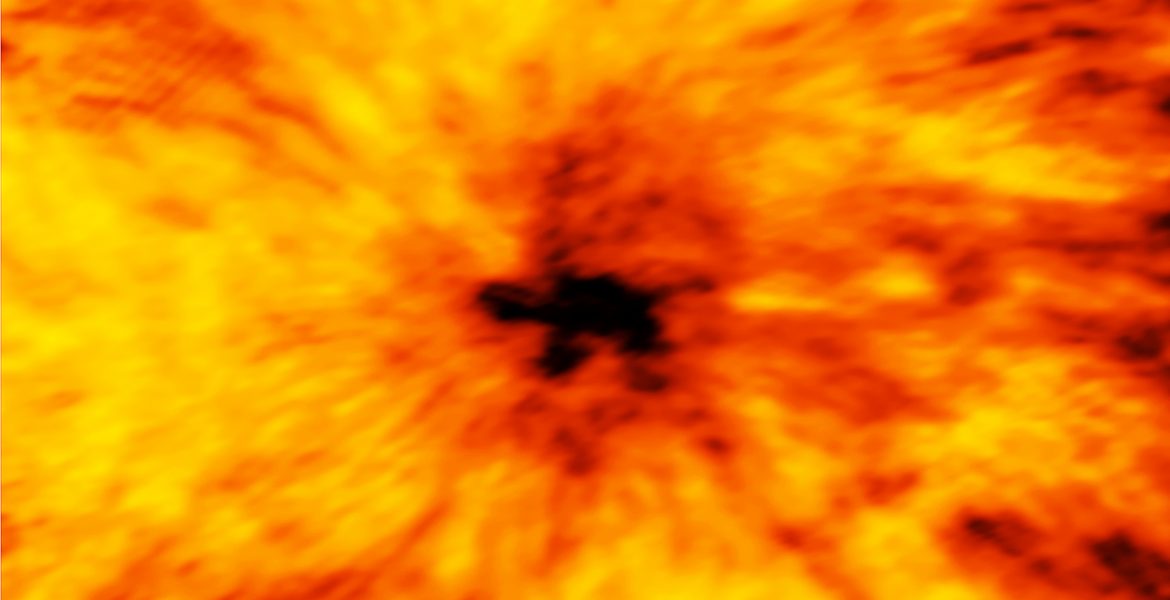 New images from the Atacama Large Millimeter/submillimeter Array (ALMA) reveal stunning details of our Sun, including the dark, contorted center of an evolving sunspot that is nearly twice the diameter of the Earth.

These images are part of the testing and verification campaign to make ALMA’s solar observing capabilities available to the international astronomical community.

Though designed principally to observe remarkably faint objects throughout the universe — such as distant galaxies and planet-forming disks around young stars – ALMA is also capable of studying objects in our own solar system, including planets, comets, and now the Sun.

During a 30-month period beginning in 2014, an international team of astronomers harnessed ALMA’s single-antenna and array capabilities to detect and image the millimeter-wavelength light emitted by the Sun’s chromosphere — the region that lies just above the photosphere, the visible surface of the Sun.

These new images demonstrate ALMA’s ability to study solar activity at longer wavelengths than observed with typical solar telescopes on Earth, and are an important expansion of the range of observations that can be used to probe the physics of our nearest star.

“We’re accustomed to seeing how our Sun appears in visible light, but that can only tell us so much about the dynamic surface and energetic atmosphere of our nearest star,” said Tim Bastian, an astronomer with the National Radio Astronomy Observatory in Charlottesville, Va. “To fully understand the Sun, we need to study it across the entire electromagnetic spectrum, including the millimeter and submillimeter portion that ALMA can observe.”

Since our Sun is many billions of times brighter than the faint objects ALMA typically observes, the solar commissioning team had to develop special procedures to enable ALMA to safely image the Sun.

The result of this work is a series of images that demonstrates ALMA’s unique vision and ability to study our Sun on multiple scales. 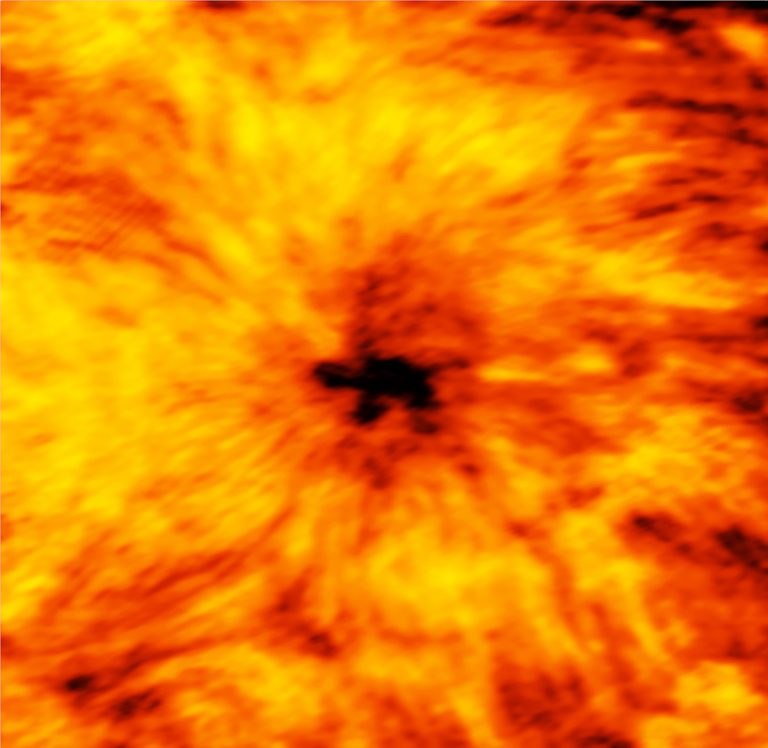 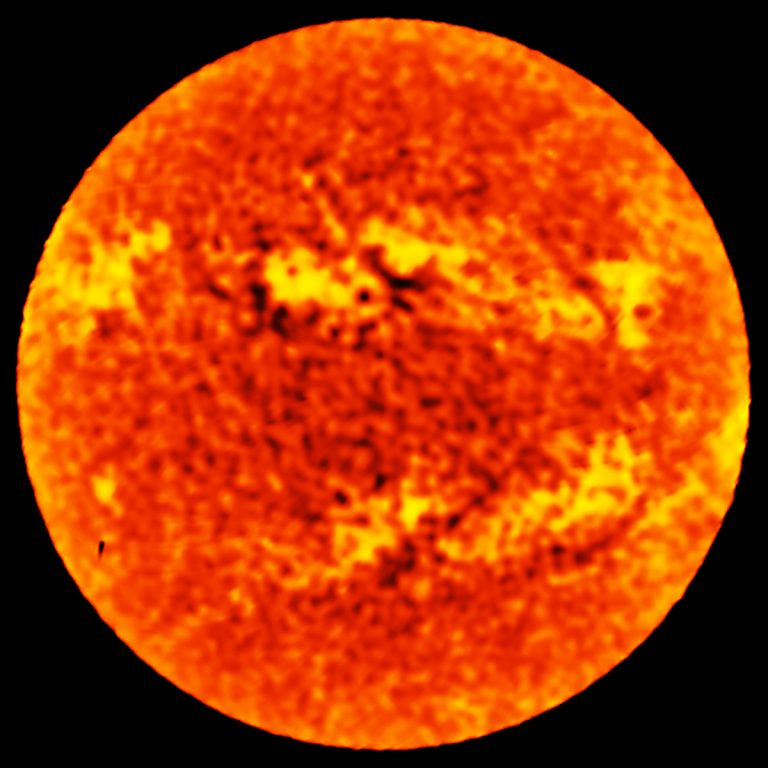 This full map of the Sun at a wavelength of 1.25 mm was taken with...Read More
Credit: ALMA (ESO/NAOJ/NRAO) 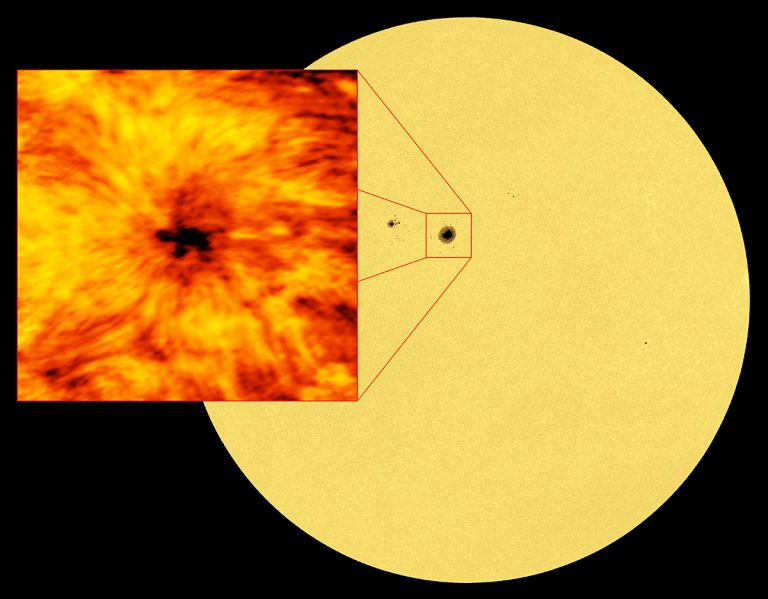 This image of the entire Sun was taken at a wavelength of 617.3 nanometers. Light...Read More
Credit: ALMA (ESO/NAOJ/NRAO); B. Saxton (NRAO/AUI/NSF)
ALMA tested its solar-observing capabilities by making a series of images of the Sun. From...Read More
Credit: ALMA (ESO/NAOJ/NRAO); B. Saxton, J. Hellerman, M. Kaufman, and A. Isella (NRAO/AUI/NSF); HST (ESA/NASA); SOHO (ESA/NASA) 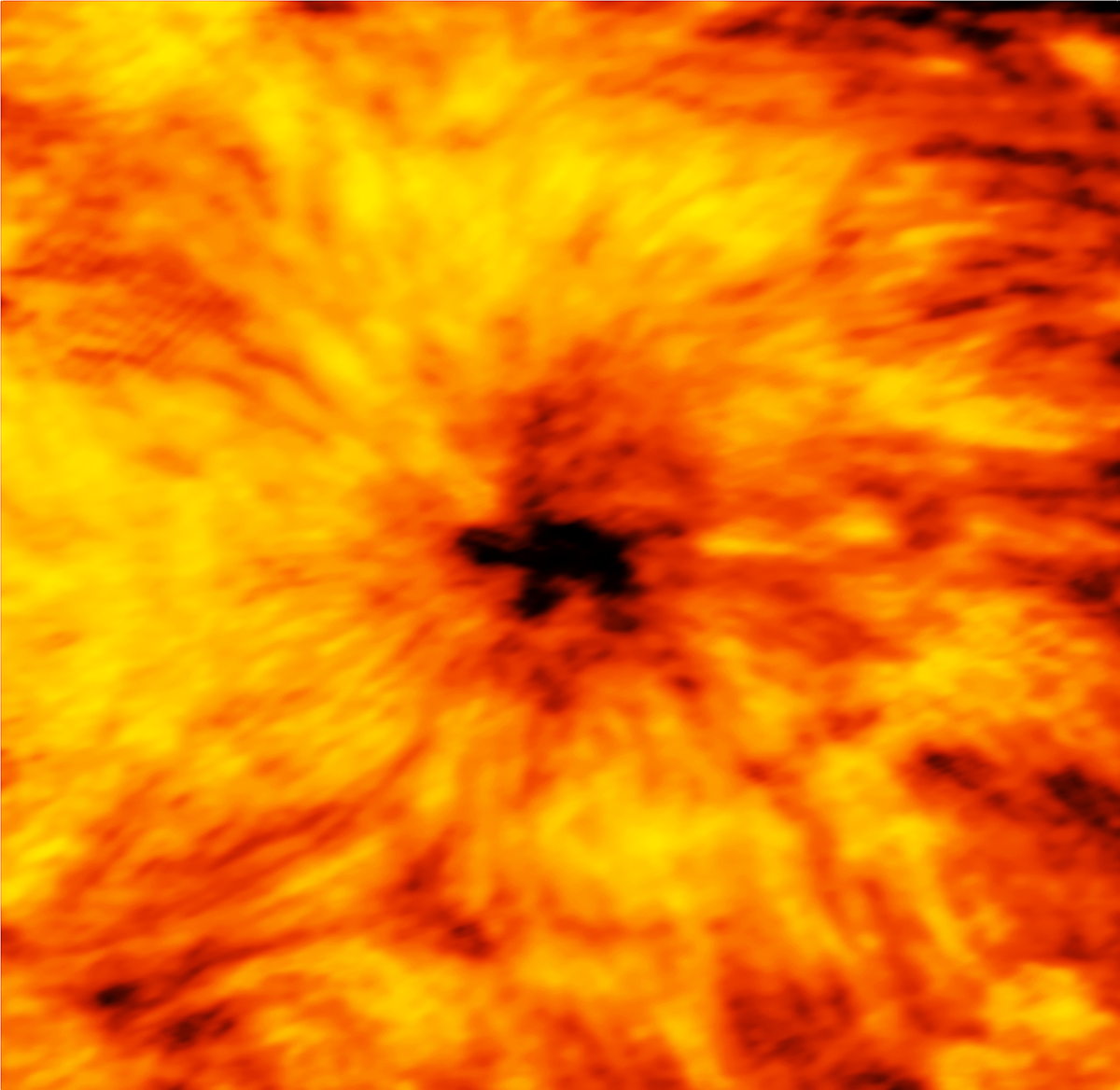 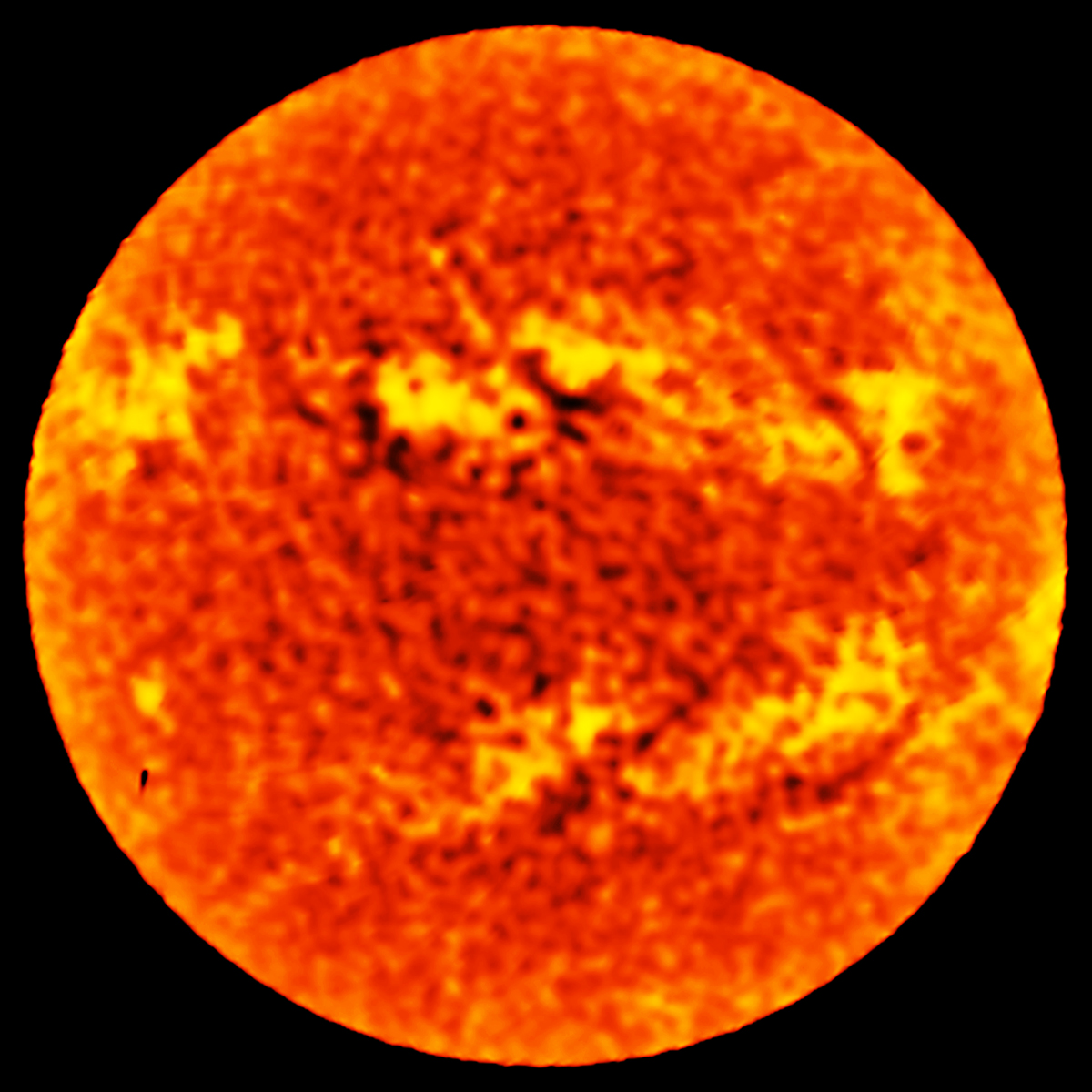 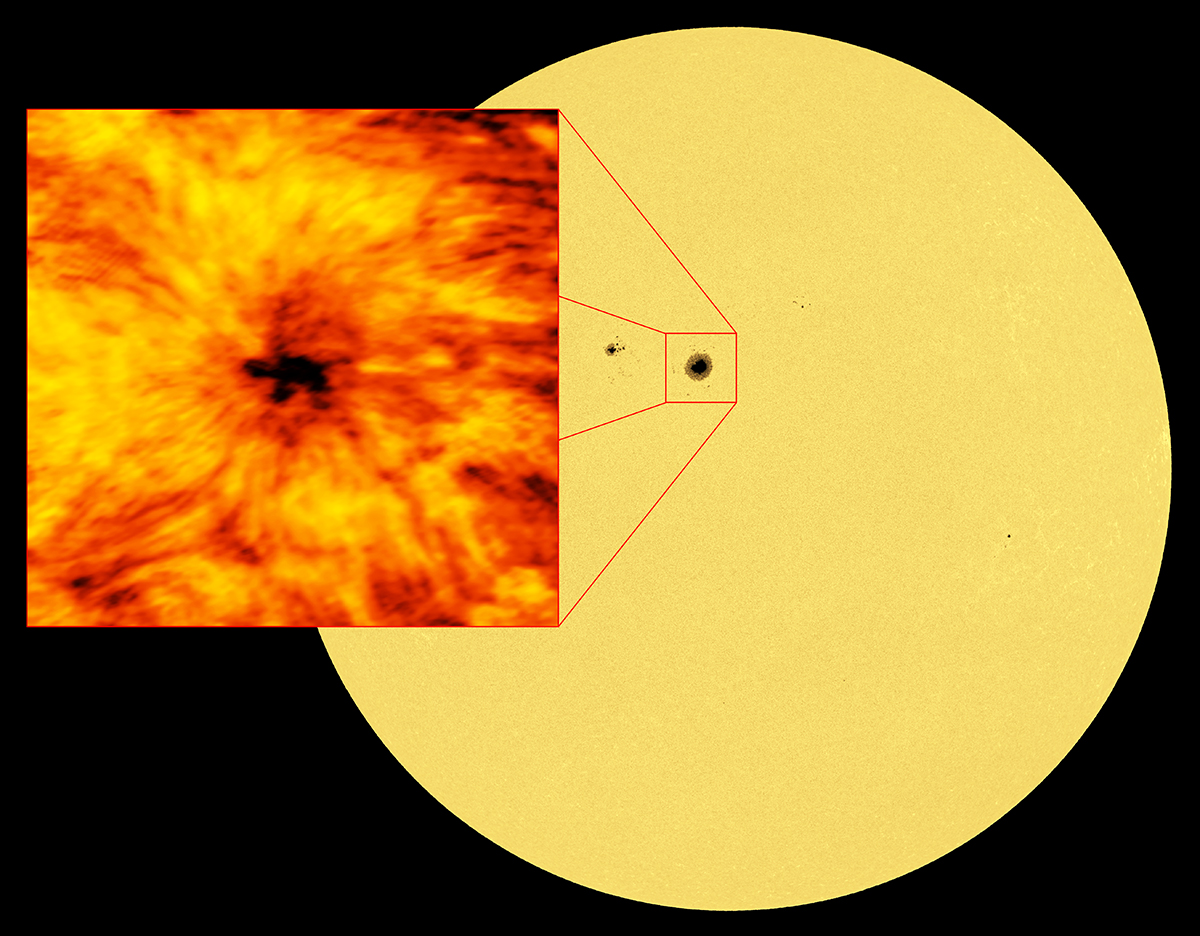