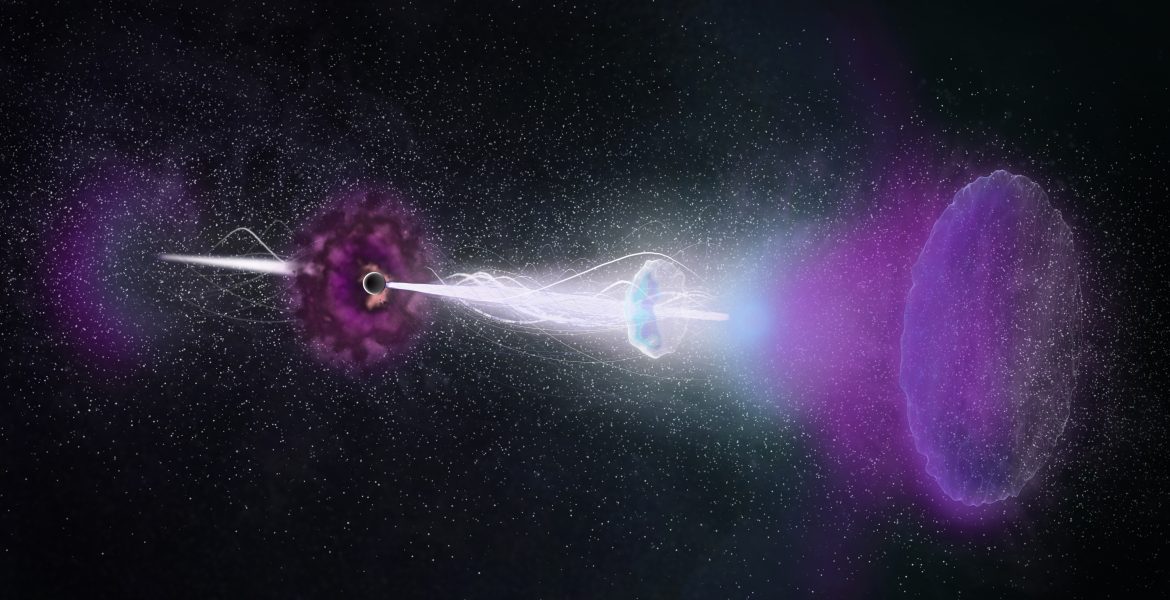 In the blink of an eye, a massive star more than 2 billion light-years away lost a million-year-long fight against gravity and collapsed, triggering a supernovaSupernovaThe extremely violent explosion of a star many times more massive than our Sun after the nuclear furnace at its core can no longer balance out the force of gravity. During this explosion, these stars may become as bright as all the other stars in a galaxy combined, and in which a great deal of matter is thrown off into space at high velocity and high energy. The remnant of these massive stars collapse into either a neutron star or a black hole. and forming a black holeBlack HoleAn object – typically a collapsed star – whose gravity is so strong that its escape velocity exceeds the speed of light. at its center.

This newborn black hole belched a fleeting yet astonishingly intense flash of gamma raysGamma raysGamma-rays have some of the smallest wavelengths and highest amount of energy compared to all other waves on the electromagnetic spectrum. known as a gamma-ray burst (GRB) toward Earth, where it was detected by NASA’s Neil Gehrels Swift Observatory on 19 December 2016.

While the gamma rays from the burst disappeared from view a scant seven seconds later, longer wavelengths of light from the explosion — including X-ray, visible light, and radio — continued to shine for weeks. This allowed astronomers to study the aftermath of this fantastically energetic event, known as GRB 161219B, with many ground-based observatories, including the National Science Foundation’s Very Large Array.

The unique capabilities of the Atacama Large Millimeter/submillimeter Array (ALMA), however, enabled a team of astronomers to make an extended study of this explosion at millimeter wavelengthMillimeter wavelengthMillimeter-wavelength light is a sliver of the electromagnetic spectrum. The waves vary in length from about 1 to 10 millimeters (between the infrared and radio portions of the spectrum). ALMA was specifically designed to study this and shorter submillimeter-wavelength light. s, gaining new insights into this particular GRB and the size and composition of its powerful jets.

“Since ALMA sees in millimeter-wavelength light, which carries information on how the jets interact with the surrounding dust and gas, it is a powerful probe of these violent cosmic explosions,” said Tanmoy Laskar, an astronomer at the University of California, Berkeley, and a Jansky Postdoctoral Fellow of the National Radio Astronomy Observatory.  Laskar is lead author of the study, which appears in the Astrophysical Journal.

These observations enabled the astronomers to produce ALMA’s first-ever time-lapse movie of a cosmic explosion, which revealed a surprisingly long-lasting reverse shockwave from the explosion echoing back through the jets. “With our current understanding of GRBs, we would normally expect a reverse shock to last only a few seconds. This one lasted a good portion of an entire day,” Laskar said.

A reverse shock occurs when material blasted away from a GRB by its jets runs into the surrounding gas. This encounter slows down the escaping material, sending a shockwave back down the jet.

Since jets are expected to last no more than a few seconds, a reverse shock should be an equally short-lived event. But that now appears not to be the case.

“For decades, astronomers thought this reverse shock would produce a bright flash of visible light, which has so far been really hard to find despite careful searches. Our ALMA observations show that we may have been looking in the wrong place, and that millimeter observations are our best hope of catching these cosmic fireworks,” said Carole Mundell of the University of Bath, and co-author of the study.

Instead, the light from the reverse shock shines most brightly at the millimeter wavelengths on timescales of about a day, which is most likely why it has been so difficult to detect previously. While the early millimeter light was created by the reverse shock, the X-ray and visible light came from the blast-wave shock riding ahead of the jet.

“What was unique about this event,” Laskar adds, “is that as the reverse shock entered the jet, it slowly but continuously transferred the jet’s energy into the forward-moving blast wave, causing the X-ray and visible light to fade much slower than expected. Astronomers have always puzzled where this extra energy in the blast wave comes from. Thanks to ALMA, we know this energy – up to 85 percent of the total in the case of GRB 161219B – is hidden in slow-moving material within the jet itself.”

The bright reverse shock emission faded away within a week. The blast wave then shone through in the millimeter band, giving ALMA a chance to study the geometry of the jet.

The visible light from the blast wave at this critical time, when the outflow has slowed just enough for all of the jet to become visible at Earth, was overshadowed by the emerging supernova from the exploded star. But ALMA’s observations, unencumbered by supernova light, enabled the astronomers to constrain the opening angle of the outflow from the jet to about 13 degrees.

Understanding the shape and duration of the outflow from the star is essential for determining the true energy of the burst. In this case, the astronomers find the jets contained as much energy as our Sun puts out in a billion years.

“This is a fantastical amount of energy, but it is actually one of the least energetic events we have ever seen. Why this is so remains a mystery,” says Kate Alexander, a graduate student at Harvard University who led the VLA observations reported in this study. “Though more than two billion light-years away, this GRB is actually the nearest such event for which we have measured the detailed properties of the outflow, thanks to the combined power of ALMA and the VLA.”

The VLA, which observes at longer wavelengths, continued observing the radio emission from the reverse shock after it faded from ALMA’s view.

This is only the fourth gamma-ray burst with a convincing, multi-frequency detection of a reverse shock, the researchers note. The material around the collapsing star was about 3,000 times less dense than the average density of gas in our galaxy, and these new ALMA observations suggest that such low-density environments are essential for producing reverse shock emission, which may explain why such signatures are so rare.

“Our rapid-response observations highlight the key role ALMA can play in following up transients, revealing the energy source that powers them, and using them to map the physics of the Universe to the dawn of the first stars,” concludes Laskar. “In particular, our study demonstrates that ALMA’s superb sensitivity and new rapid-response capabilities makes it the only facility that can routinely detect reverse shocks, allowing us to probe the nature of the relativistic jets in these energetic transients, and the engines that launch and feed them.”

Summary: Astronomers using ALMA studied a cataclysmic stellar explosion known as a gamma-ray burstGamma-ray BurstA powerful event where the powerful energy of a black hole is discharged. The gamma-ray emission can last anywhere from a few minutes to several hours, yet the afterglow from the burst can last for more than a year, which makes long-term observations possible., or GRB, and found its enduring “afterglow.” The rebound, or reverse shock, triggered by the GRB’s powerful jetsJetsA pair of beams of extremely energetic particles, usually coming from an active galactic nucleus, an exploding star, or a pulsar. (See active galactic nucleus or pulsar for more)

Jets can also come from a protostar. (See protostar) slamming into surrounding debris, lasted thousands of times longer than expected. These observations provide fresh insights into the physics of GRBs, one of the universe’s most energetic explosions.
# # # 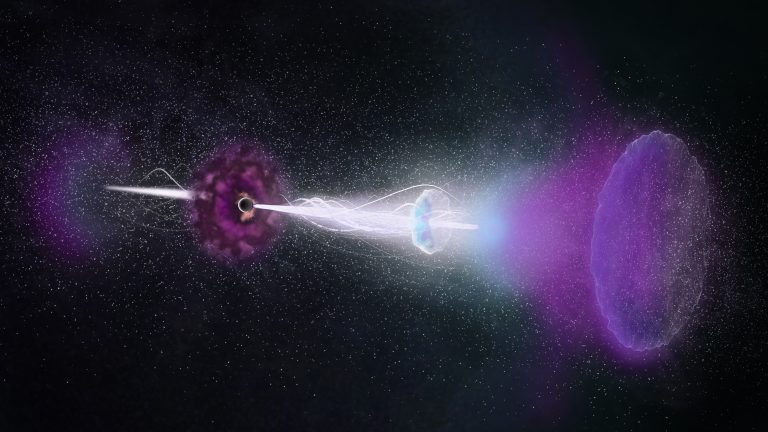 Artist impression of the "reverse shock" echoing back through the jets of the gamma-ray burst...Read More
Credit: NRAO/AUI/NSF, S. Dagnello 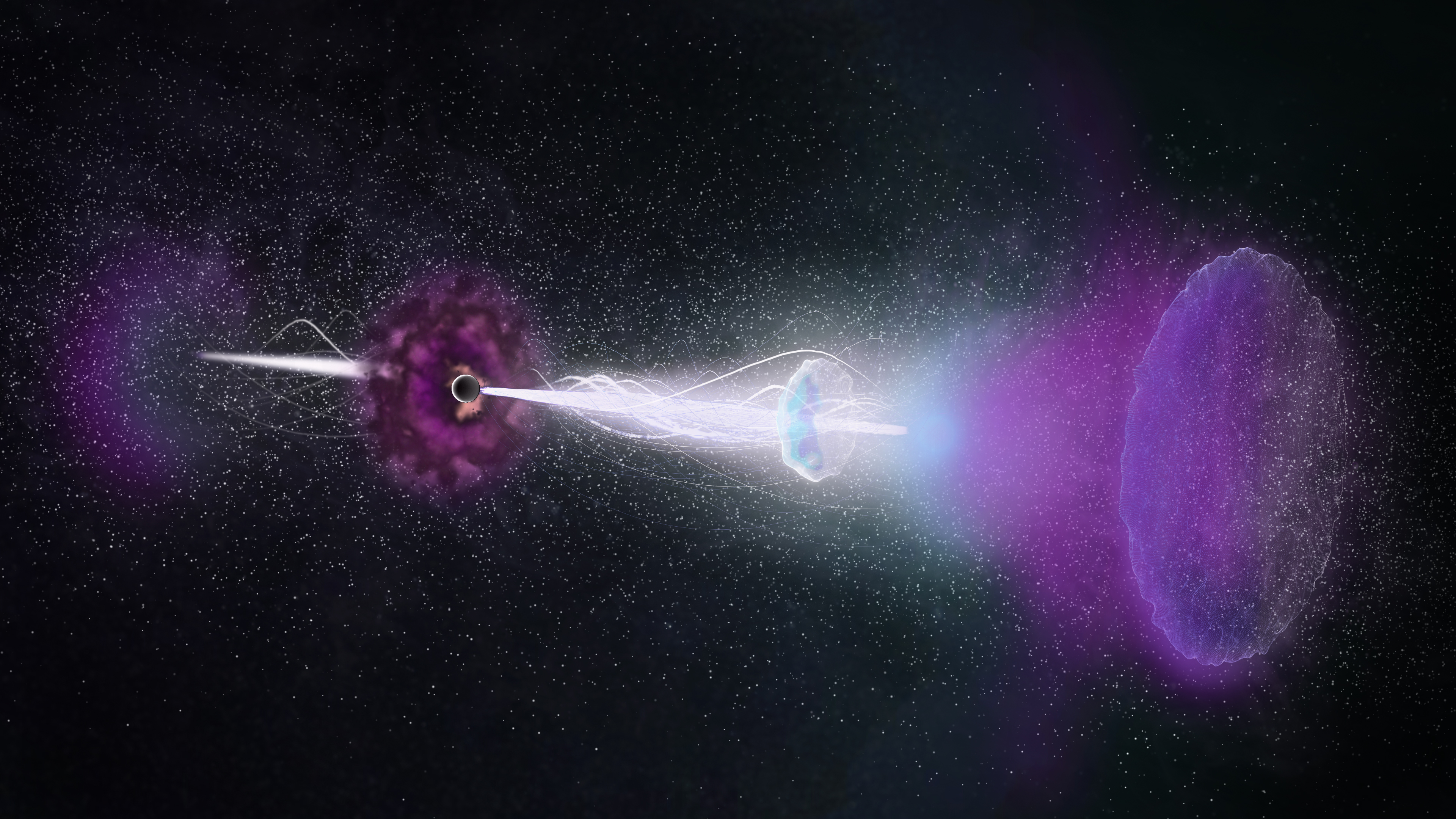