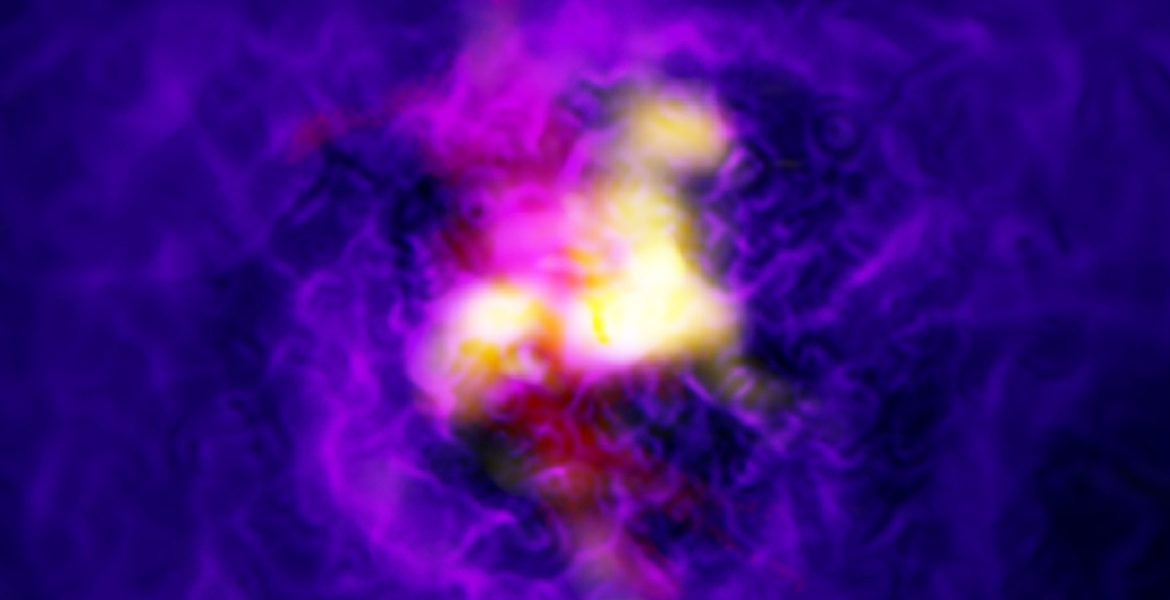 A billion light-years from Earth lies one of the universe’s most massive structures, a giant elliptical galaxyElliptical GalaxyA galaxy that appears round or elliptical in shape, typically containing little gas and dust, no spiral arms or disk, mostly older stars, which range in shape from spherical to "football" shaped, and few hot, bright stars. surrounded by a sprawling cluster of other galaxies known as Abell 2597. At the core of the central galaxy, a supermassive black holeSupermassive Black HoleA black hole that has a million or as much as a billion solar masses. These large black holes lurk at the centers of most galaxies. is powering the cosmic equivalent of a monumental fountain, drawing in vast stores of cold molecular gasMolecular gasMolecular gas is the raw material of star formation. It is made up mostly of hydrogen gas (H2) yet contains various other molecules, such as carbon monoxide. and spraying them back out again in an ongoing cycle.

Astronomers have long theorized that fountains such as this continually recirculate a galaxy’s star-forming fuel. New Atacama Large Millimeter/submillimeter Array (ALMA)Atacama Large Millimeter/submillimeter Array (ALMA)Funded by the U.S. National Science Foundation and its international partners (NRAO/ESO/NAOJ), ALMA is among the most complex and powerful astronomical observatories on Earth or in space. The telescope is an array of 66 high-precision dish antennas in northern Chile. observations of Abell 2597 show the first clear and compelling evidence for the simultaneous infalling and outflow of gas driven by a supermassive black hole. The researchers report their observations in the latest issue of the Astrophysical Journal.

“The supermassive black hole at the center of this giant galaxy acts like a mechanical ‘pump’ in a water fountain,” said Grant Tremblay, an astrophysicist at the Harvard-Smithsonian Center for Astrophysics in Cambridge, Massachusetts, and lead author on the paper. “This is one of the first systems in which we find clear evidence for both cold molecular gas inflow toward the black hole and outflow or uplift from the jets that the black hole launches.”

According to the researchers, this entire system operates via a self-regulating feedback loop. The infalling material provides power for the fountain as it “drains” toward the central black hole, like water entering the pump of a fountain. This infalling gas then causes the black hole to ignite with activity, launching high-velocity jets of super-heated material that shoot out of the galaxy. As it travels, this material pushes out clumps and streamers of gas into the galaxy’s expansive halo, where it eventually rains back in on the black hole, triggering the entire process anew.

In total, about three billion solar massSolar MassA solar mass, the calculated mass of our sun (332,946 times the mass of Earth). It is a standard unit of measure for extremely massive cosmic objects.es of molecular gas is part of this fountain, forming a filamentary nebula that spans the innermost 100,000 light-years of the galaxy.

In an earlier study by the same authors published in the journal Nature, the researchers were able to verify the interconnection between the black hole and the galactic fountain by observing the region across a range of wavelengths, or portions of the spectrum. By studying the location and motion of molecules of carbon monoxide (CO) with ALMA, which shine brightly in millimeter-wavelength light, the researchers could measure the motion of the gas as it falls in toward the black hole.

Earlier data from the Multi-Unit Spectroscopic Explorer (MUSE) on ESO’s Very Large Telescope (VLT) revealed warm, ionized gas being expelled from the galaxy – essentially the plume of the fountain. The new ALMA observations found clumps of cold, molecular gas in precisely the same locations as the warm gas seen in the earlier observations.

“The unique aspect here is a very detailed coupled analysis of the source using data from ALMA and the MUSE instrument. The two facilities make for an incredibly powerful combination,” said Tremblay. “ALMA revealed the distribution and motions of the cold molecular gas clouds, and MUSE did the same for the warm ionized gas.”

The ALMA and MUSE data were combined with a new, ultra-deep observation of the cluster by NASA’s Chandra X-ray Observatory, revealing the hot phase of this fountain in exquisite detail, noted the researchers.

The observations also very convincingly support the hypothesis that the warm ionized and cold molecular nebulaNebulaA nebula is a massive cloud composed of dust, gas and are often illuminated by near by hot stars. s are one-in-the-same, with the warm ionized gasIonized gasGas either between the stars or among galaxies that has been superheated so that electrons are stripped away from their atoms or molecules. merely being the “shell” around the cold molecular cores that churn within this galaxy-scale fountain.

This multiwavelength approach offers an uncommonly complete picture of this system. “It’s like observing the rain cloud, rain, and puddle all at the same time,” noted Tremblay. While this is just one observation of one galaxy, the astronomers speculate that they may be observing a process that is common in galaxies and fundamental to their evolution.

This research is presented in a paper titled “A Galaxy-scale Fountain of Cold Molecular Gas Pumped by a Black Hole” by G. Tremblay et al. in the Astrophysical Journal. [http://iopscience.iop.org/article/10.3847/1538-4357/aad6dd ] 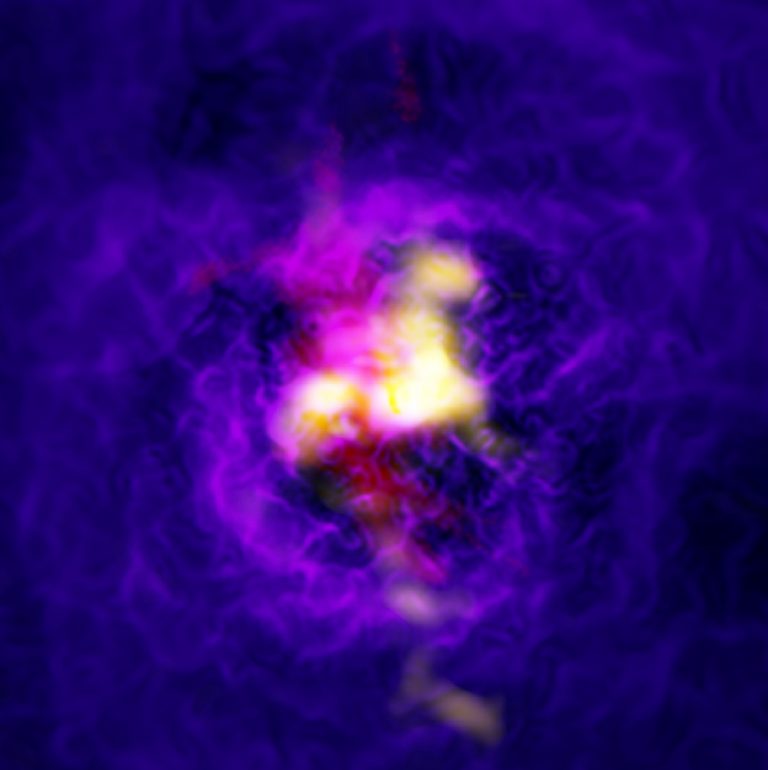 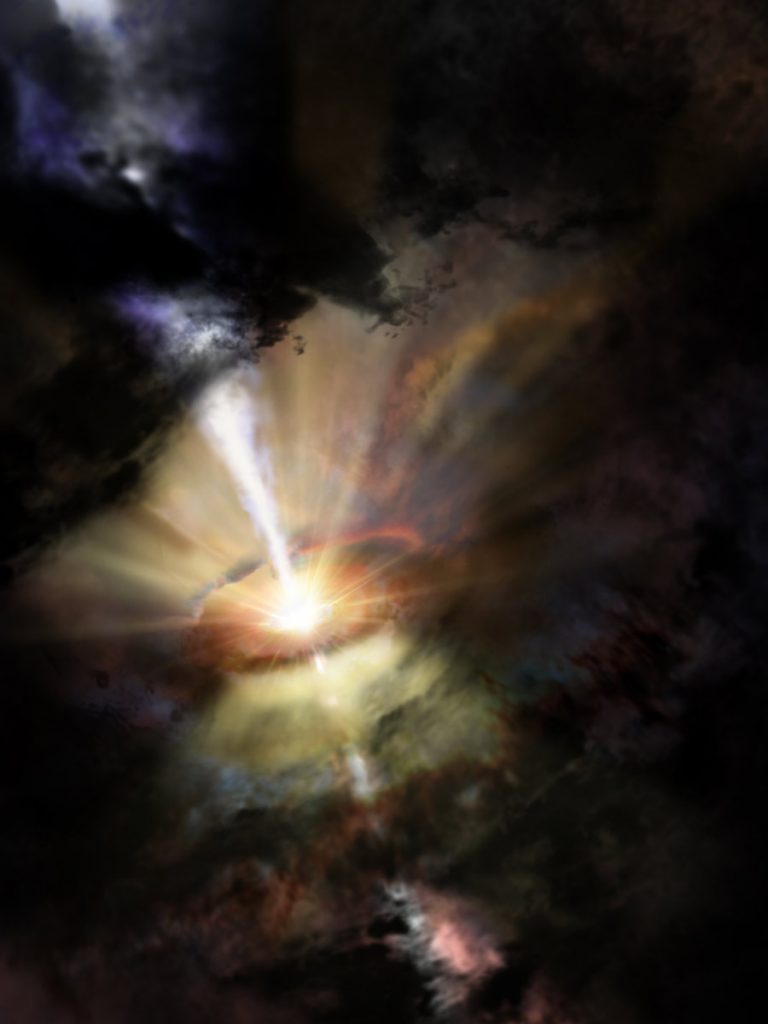 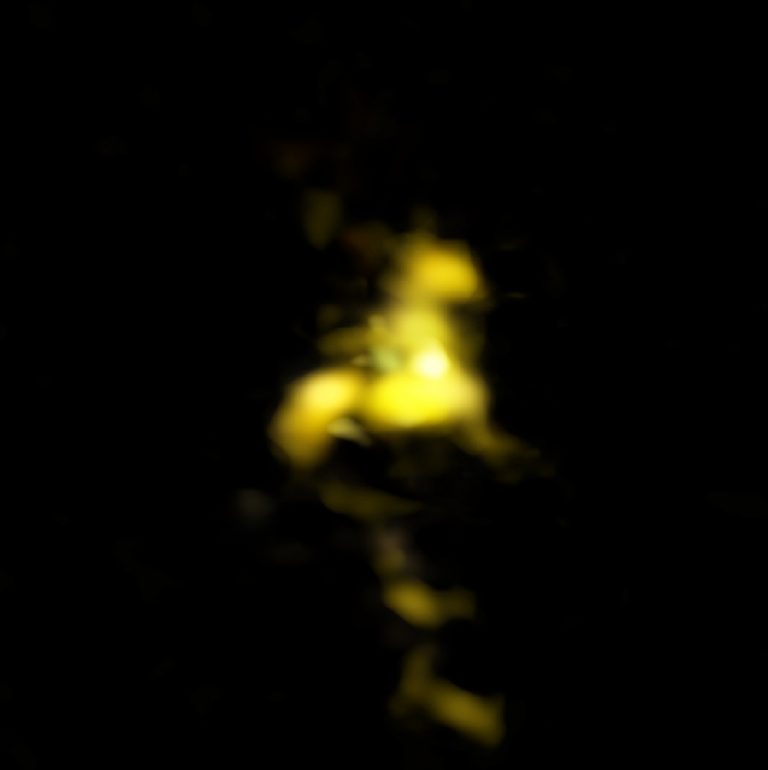 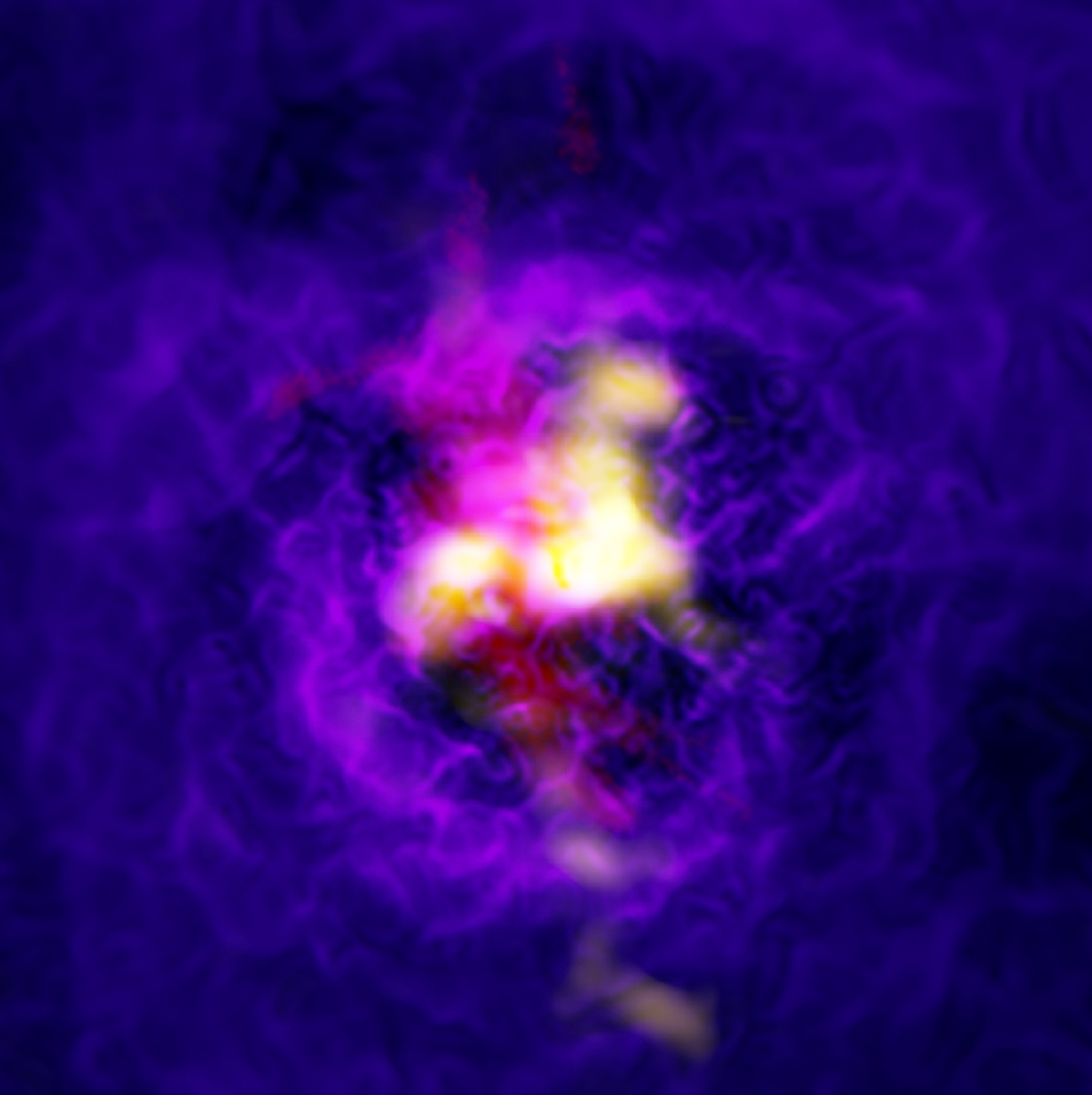 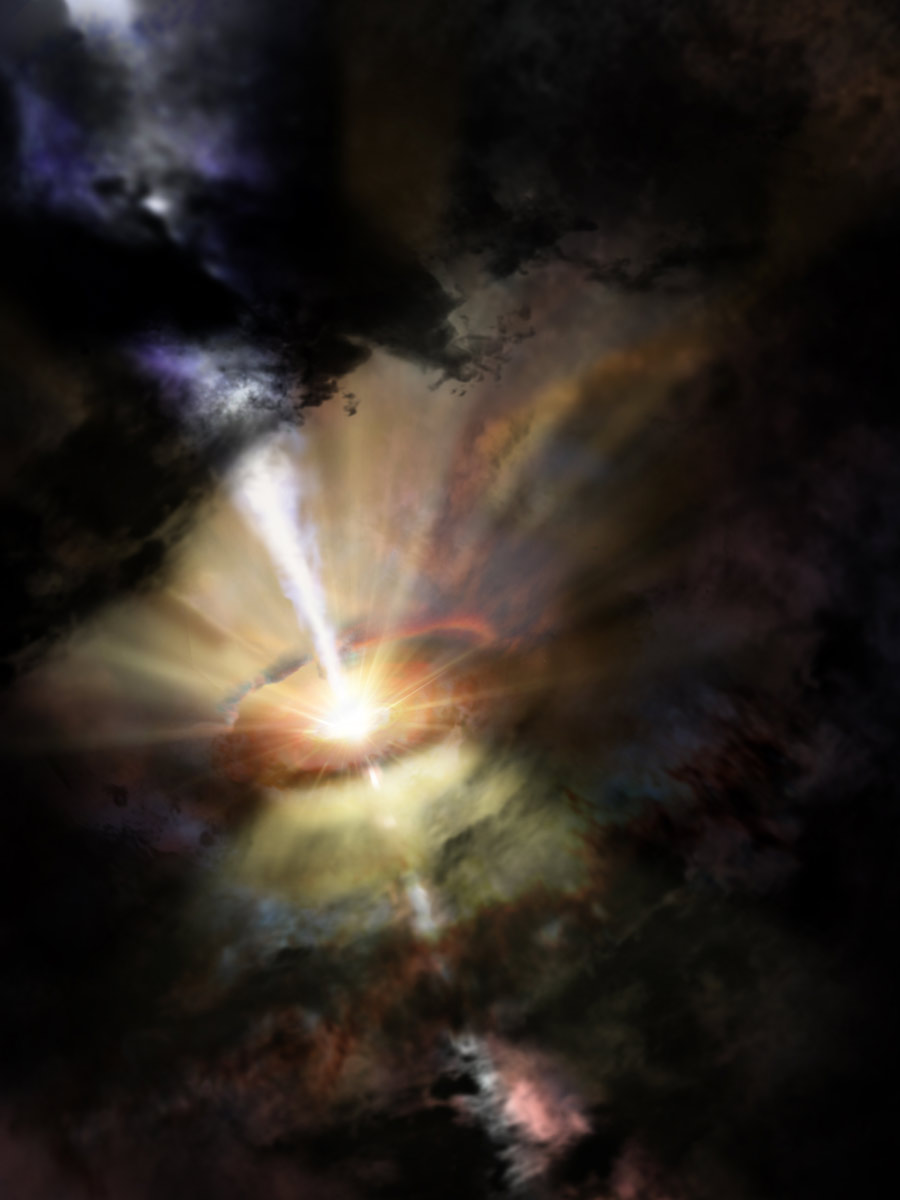 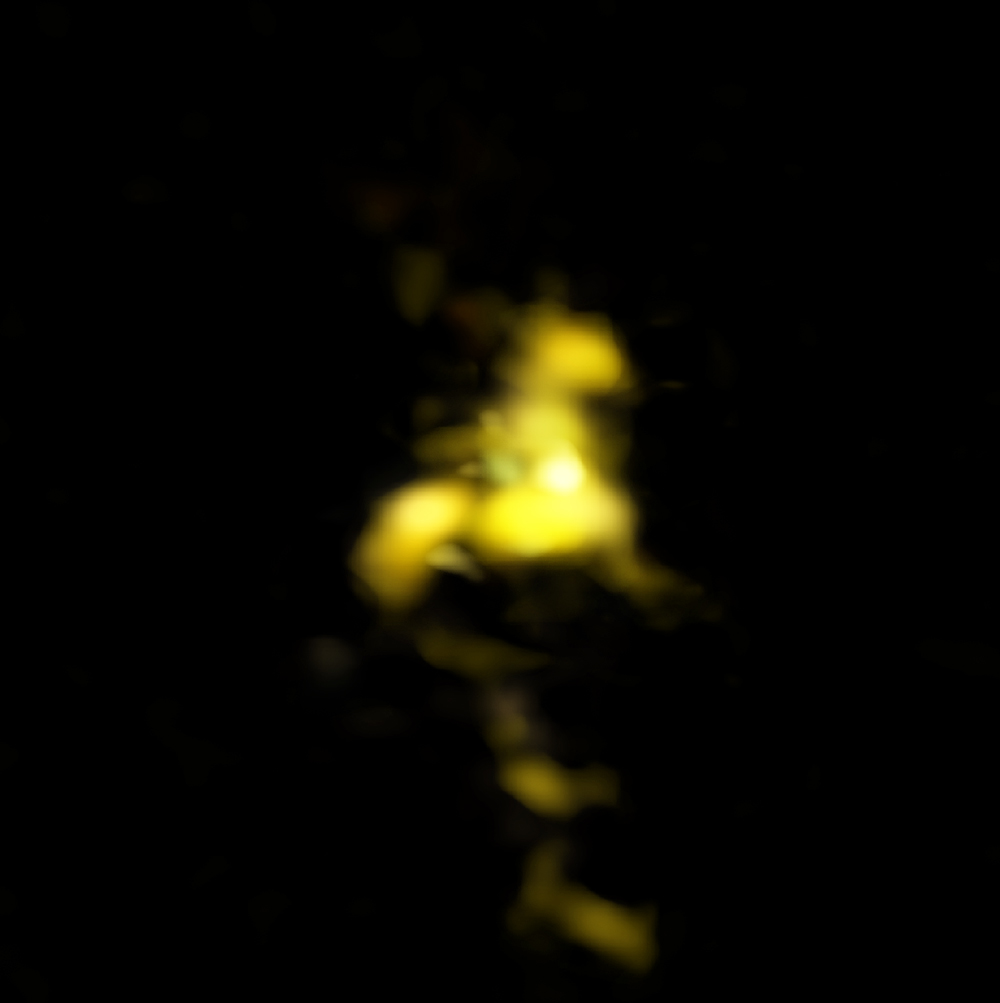