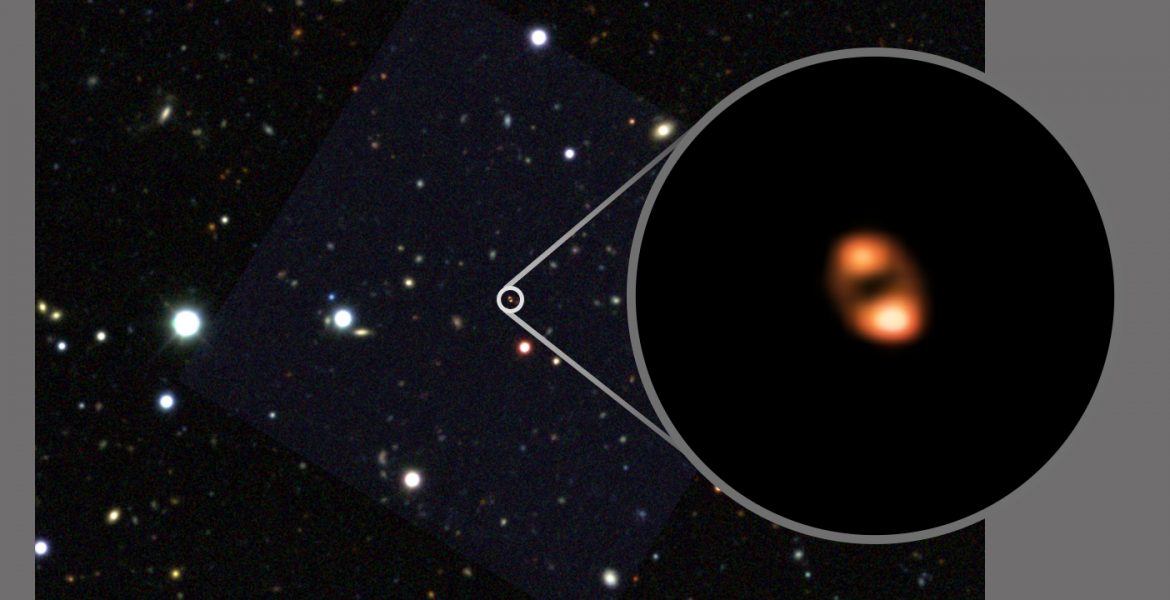 Synopsis: Astronomers using ALMA, with the aid of a gravitational lensGravitational LensThe effect when light from a distant object, such as a galaxy, is bent by the gravity of a massive object, such as another galaxy, before it reaches the Earth. If the two objects are perfectly aligned, the light from the distant object appears as a ring, to observers on Earth. This phenomenon is called an Einstein Ring, since its existence was predicted by Einstein in his theory of General Relativity. (see definition above), have detected the most-distant galactic “wind” of molecules ever observed, seen when the universe was only one billion years old. By tracing the outflow of hydroxyl (OH) molecules – which herald the presence of star-forming gas in galaxies – the researchers show how some galaxies in the early universe quenched an ongoing wildfire of starbirth.

Some galaxies, like the Milky Way and Andromeda, have relatively slow and measured rates of starbirth, with about one new star igniting each year. Other galaxies, known as starburst galaxies, forge 100s or even 1000s of stars each year. This furious pace, however, cannot be maintained indefinitely.

To avoid burning out in a short-lived blaze of glory, some galaxies throttle back their runaway starbirth by ejecting – at least temporarily – vast stores of gas into their expansive halos, where the gas either escapes entirely or slowly rains back in on the galaxy, triggering future bursts of star formation.

Up to now, however, astronomers have been unable to directly observe these powerful outflows in the very early universe, where such mechanisms are essential to prevent galaxies from growing too big, too fast.

New observations with the Atacama Large Millimeter/submillimeter ArrayAtacama Large Millimeter/submillimeter Array (ALMA)Funded by the U.S. National Science Foundation and its international partners (NRAO/ESO/NAOJ), ALMA is among the most complex and powerful astronomical observatories on Earth or in space. The telescope is an array of 66 high-precision dish antennas in northern Chile. (ALMA), show – for the first time — a powerful galactic “wind” of molecules in a galaxy seen when the universe was only one billion years old. This result provides insights into how certain galaxies in the early universe were able to self-regulate their growth so they could continue forming stars across cosmic time.

“Galaxies are complicated, messy beasts, and we think outflows and winds are critical pieces to how they form and evolve, regulating their ability to grow,” said Justin Spilker, an astronomer at the University of Texas at Austin and lead author on a paper appearing in the journal Science.

Astronomers have observed winds with the same size, speed, and mass in nearby starbursting galaxies, but the new ALMA observation is the most distant unambiguous outflow ever seen in the early universe.

The galaxy, known as SPT2319-55, is more than 12 billion light-years away. It was discovered by the National Science Foundation’s South Pole Telescope.

ALMA was able to observe this object at such tremendous distance with the aid of a gravitational lens provided by a different galaxy that sits almost exactly along the line of sight between Earth and SPT2319-55. Gravitational lensing – the bending of light due to gravity — magnifies the background galaxy to make it appear brighter, which allows the astronomers to observe it in more detail than they would otherwise be able to. Astronomers use specialized computer programs to “unscramble” the effects of gravitational lensing to reconstruct an accurate image of the more-distant object.

This lens-aided view revealed a powerful “wind” of star-forming gas exiting the galaxy at nearly 800 kilometers per second. Rather than a constant, gentle breeze, the wind is hurtling away in discrete clumps, removing the star-forming gas just as quickly as the galaxy can turn that gas into new stars.

The outflow was detected by the millimeter-wavelength signature of a molecule called hydroxyl (OH), which appeared as an absorption line: essentially, the shadow of an OH fingerprint in the galaxy’s bright infrared light.

As new, dust-enshrouded stars form, that dust heats up and glows brightly in infrared light. But, the galaxy is also launching a wind, and some of it is blowing in our direction. As the infrared light passes through the wind on its journey toward Earth, the OH molecules in the wind absorb some of the infrared light at a very particular wavelength that ALMA can observe.

“That’s the absorption signature that we detected, and from that we can also tell how fast the wind is moving, and get a rough idea of how much material is contained in the outflow,” said Spilker. ALMA is able to detect this infrared light because it has been stretched to millimeter wavelengths on its journey to Earth by the ongoing expansion of the Universe.

Molecular winds are an efficient way for galaxies to self-regulate their growth, the researchers note. These winds are likely triggered by either the combined effect of all the supernova explosions that go along with rapid, massive star formation, or by a powerful release of energy as some of the gas in the galaxy falls down onto the supermassive black holeSupermassive Black HoleA black hole that has a million or as much as a billion solar masses. These large black holes lurk at the centers of most galaxies. at its center.

“So far, we have only observed one galaxy at such a remarkable cosmic distance, but we’d like to know if winds like these are also present in other galaxies to see just how common they are,” concluded Spilker. “If they occur in basically every galaxy, we know that molecular winds are both ubiquitous and also a really common way for galaxies to self-regulate their growth.”

“This ALMA observation demonstrates how nature coupled with exquisite technology can give us insights into distant astronomical objects,” said Joe Pesce, NSF Program Director for NRAO/ALMA, “and the frequency range accessible to ALMA meant it was able to the detect the redshifted spectral feature from this important molecule.”

This research is presented in a paper titled “Fast Molecular Outflow from a Dusty Star-Forming Galaxy in the Early Universe,” by J.S. Spilker et al. in the journal Science. [http://www.sciencemag.org] 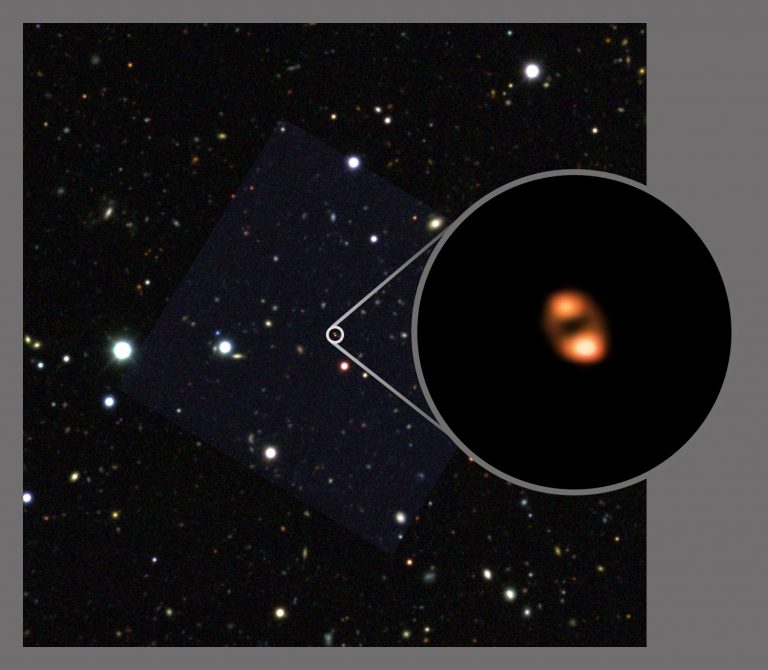 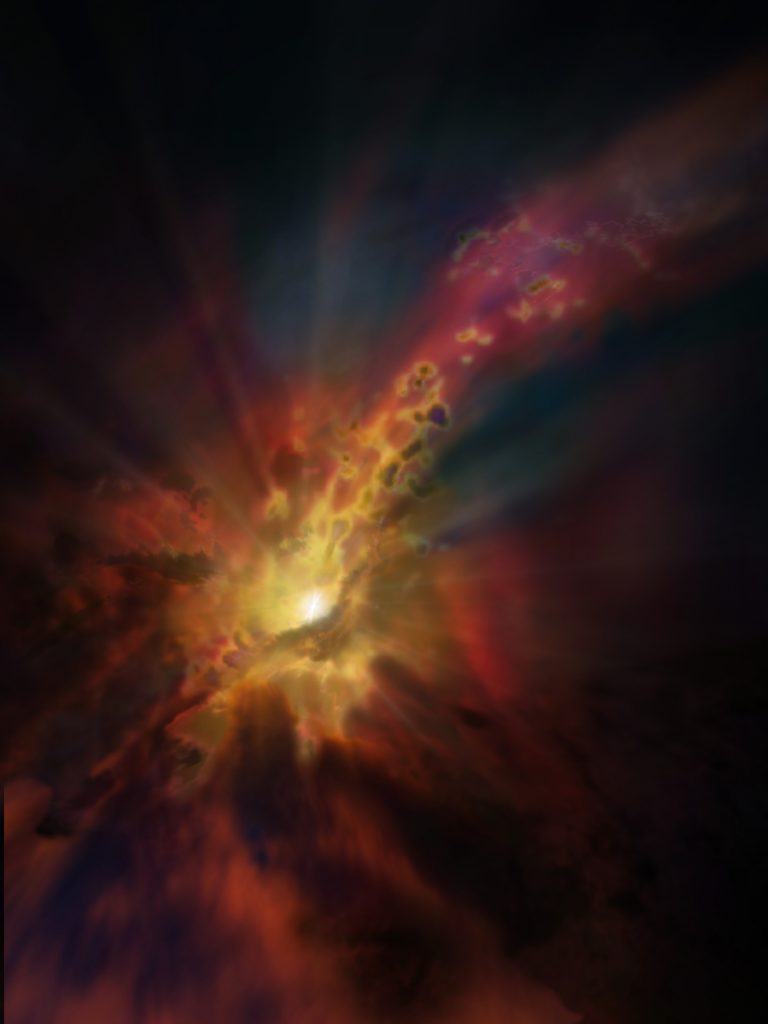 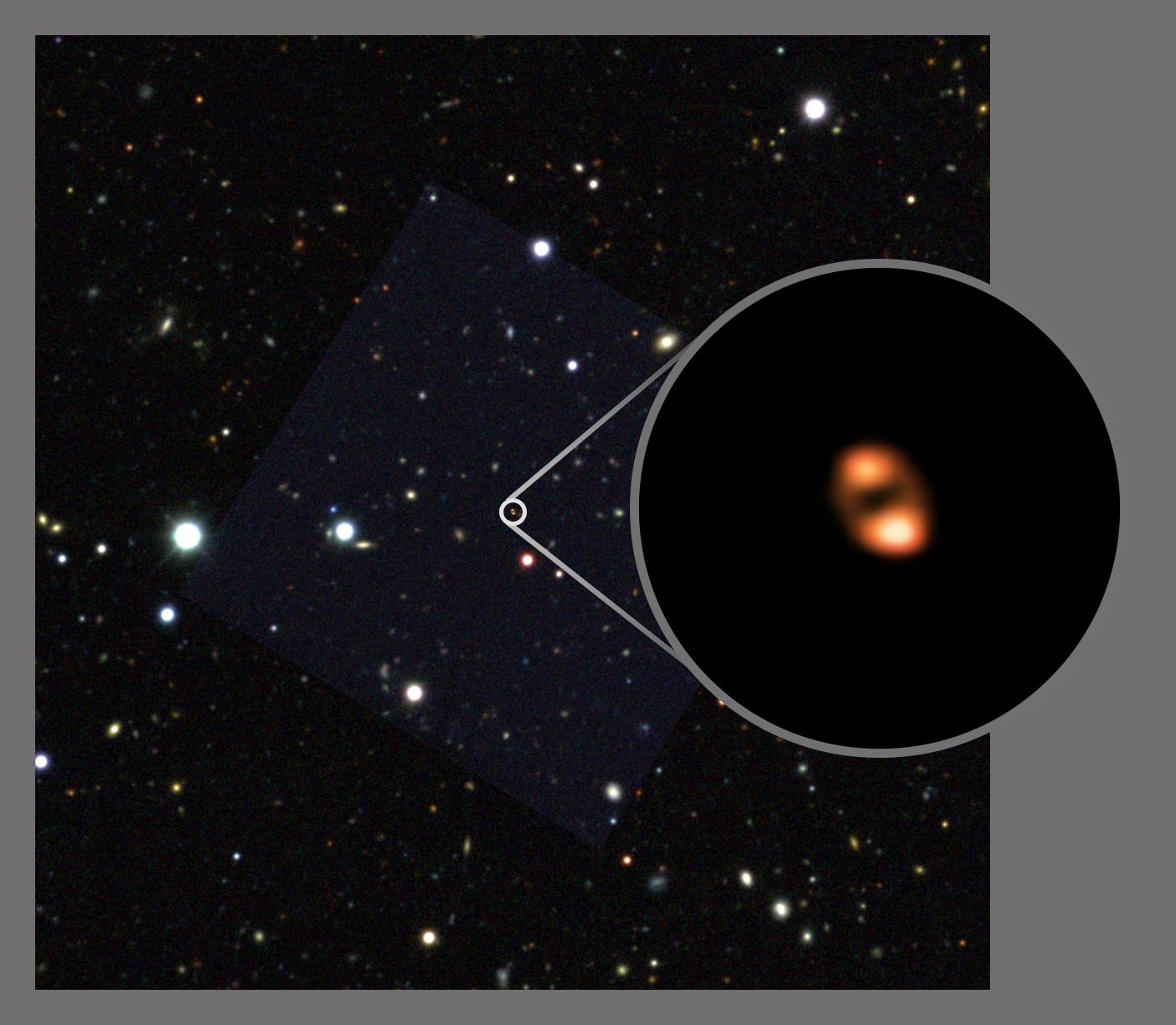 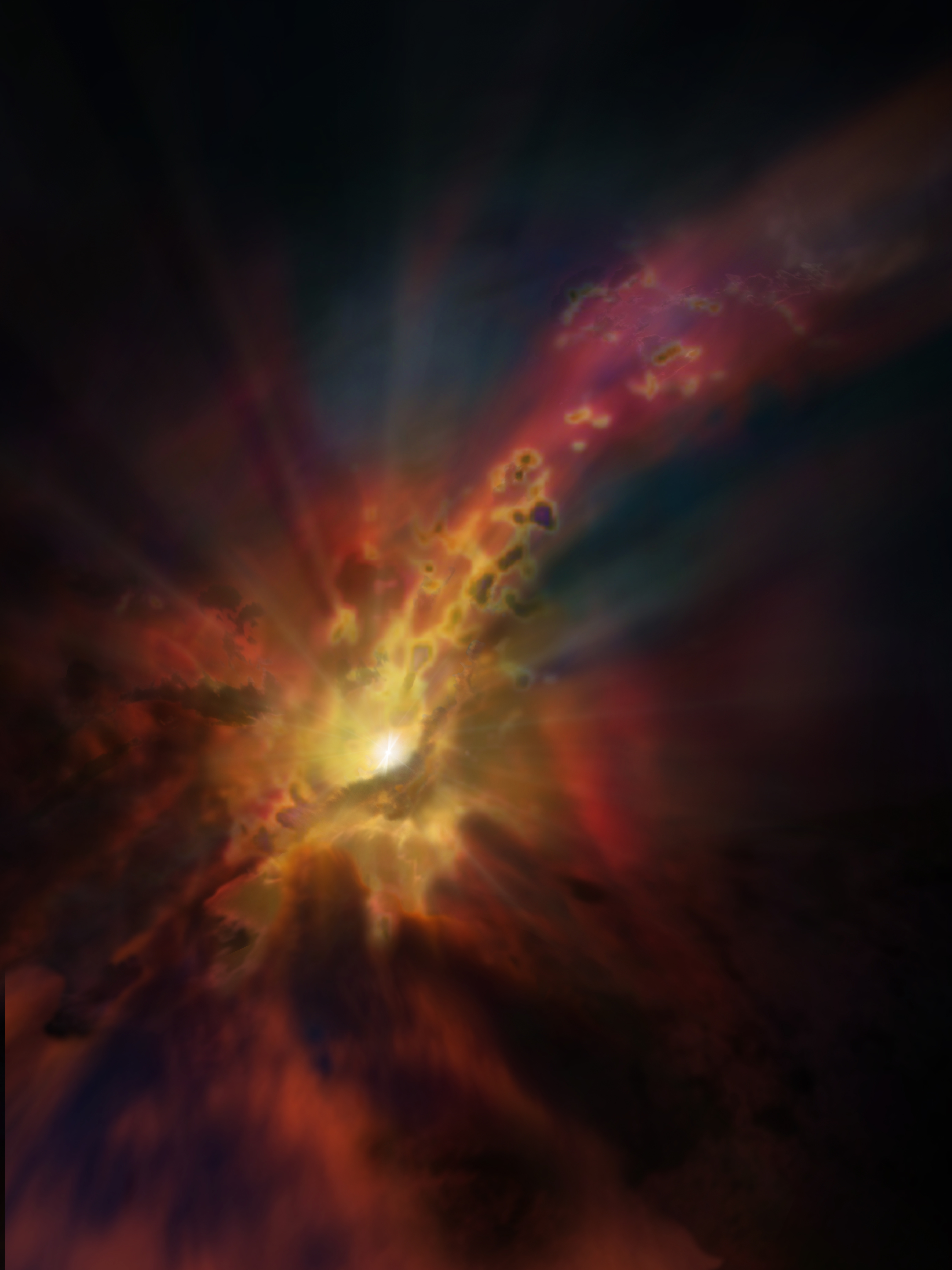