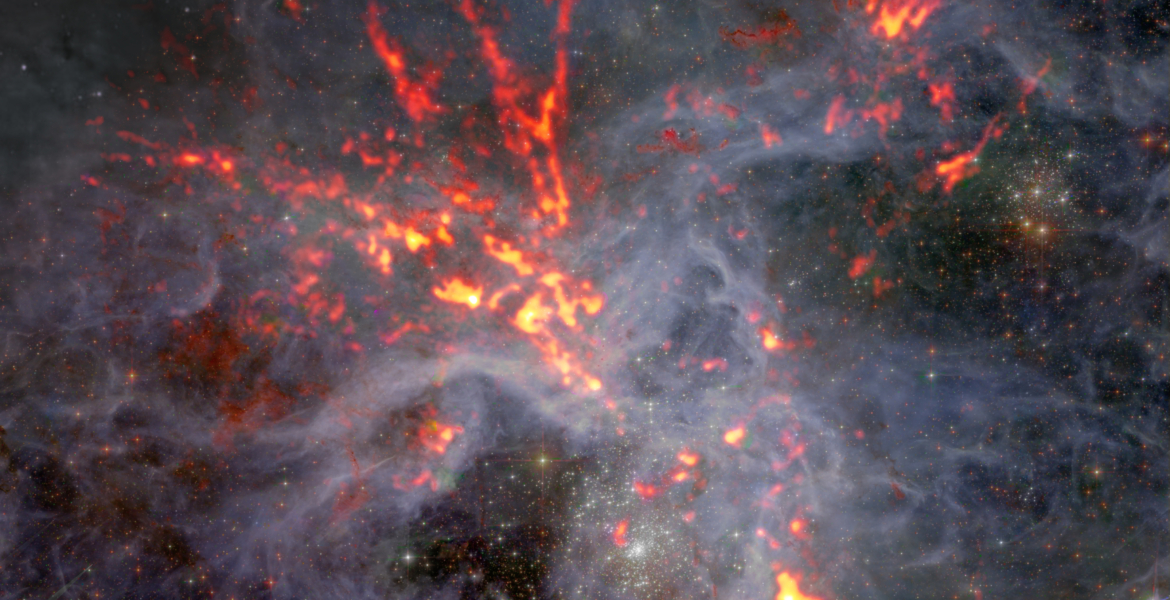 While using the Atacama Large Millimeter/submillimeter Array (ALMA) to observe large star-forming regions in the Large Magellanic Cloud (LMC), scientists discovered a turbulent push-and-pull dynamic in the star-forming region, 30 Doradus. Observations revealed that despite intense stellar feedback, gravity is shaping the molecular cloud, and against scientific odds, is driving the ongoing formation of young, massive stars. The observations were presented today in a press conference at the 240th meeting of the American Astronomical Society (AAS) in Pasadena, California, and are published in The Astrophysical Journal (ApJ).

30 Doradus is a large star-forming region located next door to the Milky Way— at just 170,000 light-years away— in the heart of the Large Magellanic Cloud’s famed Tarantula Nebula. It is home to the most massive cluster of stars in the cosmic neighborhood, creating a perfect target for scientists seeking to understand the birth and evolution of stars. At the heart of 30 Doradus lies a sparkling stellar nursery that has witnessed the birth of more than 800,000 stars and protostars, including half a million hot, young, and massive stars. The region is of interest to astronomers studying star formation and galactic evolution because of the ongoing effects of gravityGravityA mutual physical force of nature that causes two bodies to attract each other. and stellar feedback— enormous energy released back into the region by young and massive stars that can slow down star formation— which compete against each other to manage star-formation rates.

New observations of 30 Doradus were made using the highly-sensitive Band 6 receivers on ALMA, an observatory co-operated by the U.S. National Science Foundation’s National Radio Astronomy Observatory (NRAO), and led to a surprising revelation about the molecular cloud. “Stars form when dense clouds of gas become unable to resist the pull of gravity. Our new observations reveal clear evidence that gravity is shaping the thickest parts of the clouds, while also revealing many lower-density cloud fragments which are too turbulent for gravity to exert much influence,” said Tony Wong, a professor at the University of Illinois at Urbana-Champaign and the lead author on the new research. “We were expecting to find that the parts of the cloud closest to the young, massive stars would show the clearest signs of gravity being overwhelmed by feedback, and as a result, a lower rate of star formation. Instead, these observations confirmed that even in a region with extremely active feedback, gravity’s presence is still strongly felt, and star formation is likely to continue.”

To form a clearer picture of what was happening in 30 Doradus, the team divided the cloud into clumps to measure how one part of the cloud differs from another. Since stars typically form in the densest parts of molecular clouds, distinguishing between the less-dense and more-dense clumps was critical to building a clear understanding of what is happening in 30 Doradus. The novel approach revealed a pattern. “We used to think of interstellar gas clouds as puffy or roundish structures, but it’s increasingly clear that they are string-like or filamentary,” said Wong. “When we divided the cloud into clumps to measure differences in density we observed that the densest clumps are not randomly placed but are highly organized onto these filaments. The filaments themselves appear to be shaped by gravity, so are probably an important step in the process of star formation.”

Unlike the Milky Way, which experiences a relatively slow and steady star formation rate of roughly seven stars— or the equivalent of four solar masses— each year, 30 Doradus’ home galaxy, the LMC, and its star-forming regions go through “boom and bust” cycles, which often results in periods of intensely paced star formation. The team hopes that the new findings, as well as additional future research, will shed light on the differences between the Milky Way and other, more active star-forming galaxies, including how the competition between gravity and feedback shapes molecular clouds and impacts stellar birth rates.

Remy Indebetouw, an astronomer at NRAO and a co-author of the research said, “30 Doradus contains the nearest massive stellar cluster to Earth. Clusters like this one can act like bombs in galaxies, blowing out gas and even changing their long-term evolution. We want to understand how molecular clouds turn into stars, in detail— how long does it take, how quickly do newly formed stars start to affect their natal cloud, and over what distances, things that are currently not well understood. Observing these clusters will get us one step closer to an answer.”

Wong added that the observations are both helping scientists to understand the broad scientific implications of star formation and revealing the history and future of galaxies. “One of the biggest mysteries of astronomy is why we are able to witness stars forming today. Why didn’t all of the available gas collapse in a huge fireworks show long ago? What we’re learning now can help us to shine a light on what is happening deep within molecular clouds so that we can better understand how galaxies sustain star formation over time.” 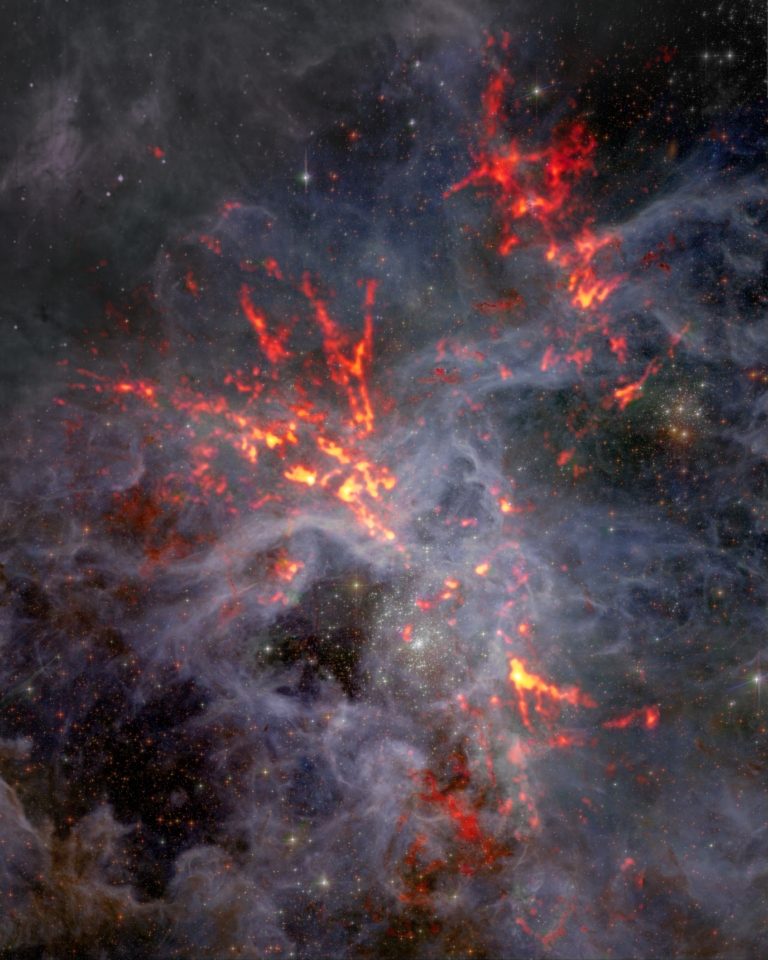 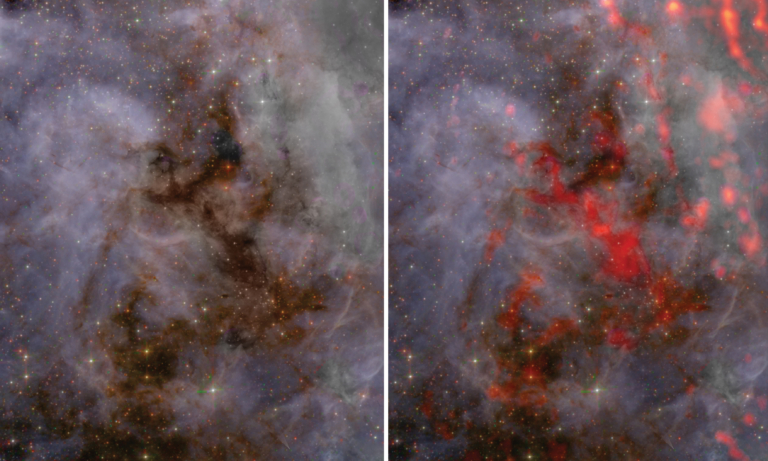 This zoomed-in view of the southern region of 30 Doradus reveals some of the clumpy...Read More
Credit: ALMA (ESO/NAOJ/NRAO), T. Wong (U. Illinois, Urbana-Champaign); S. Dagnello (NRAO/AUI/NSF) 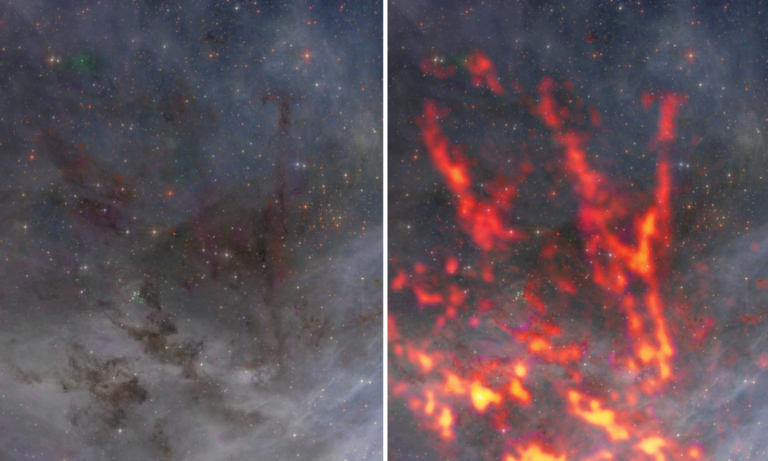 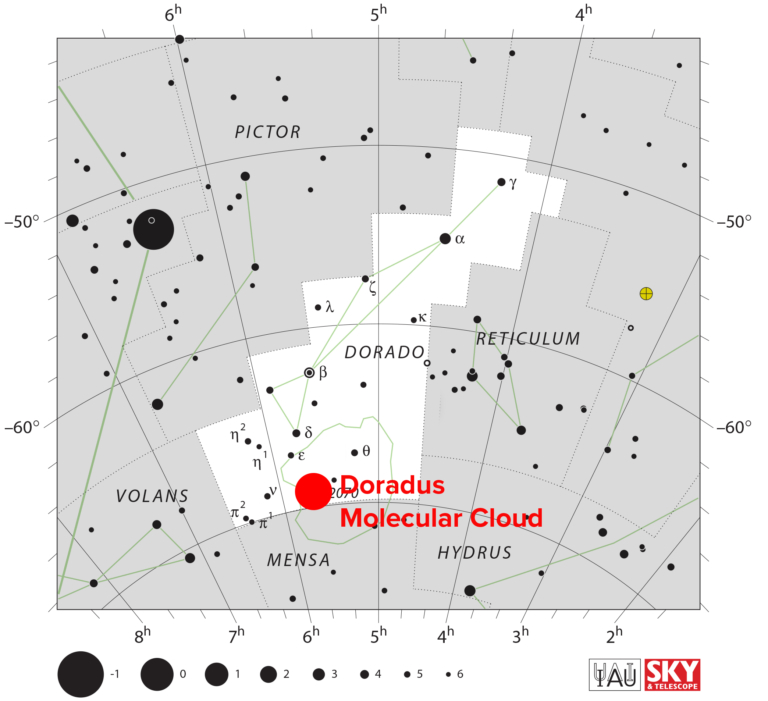 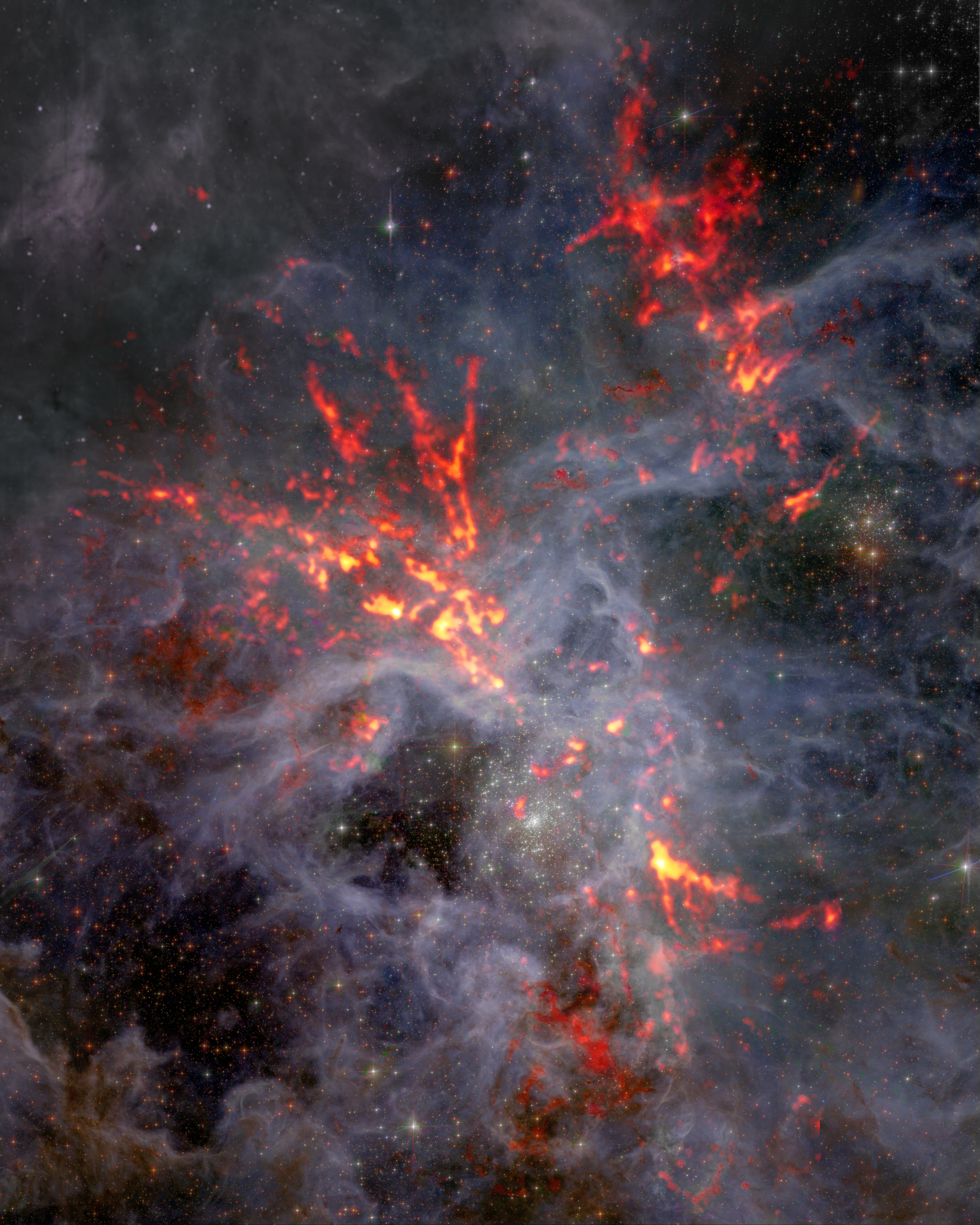 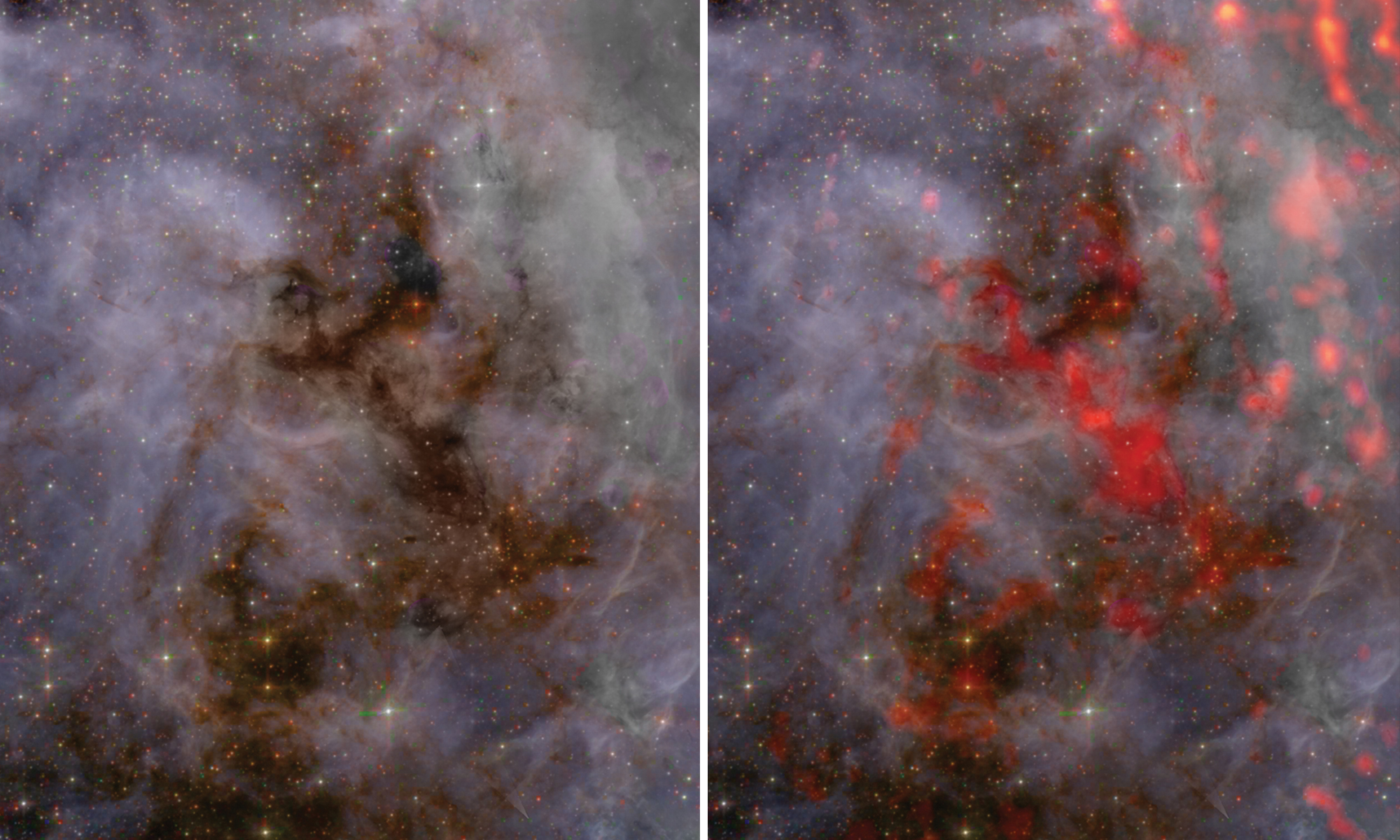 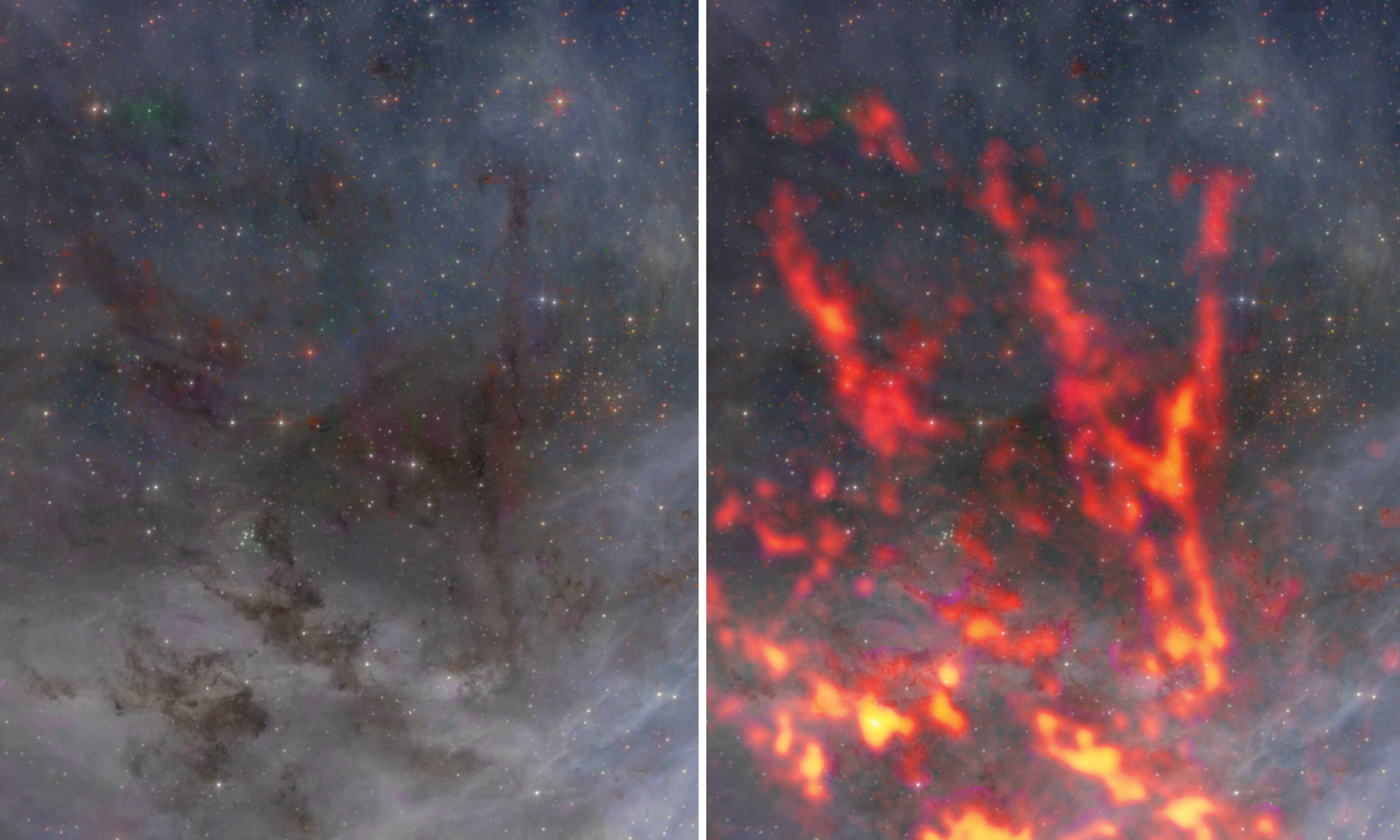 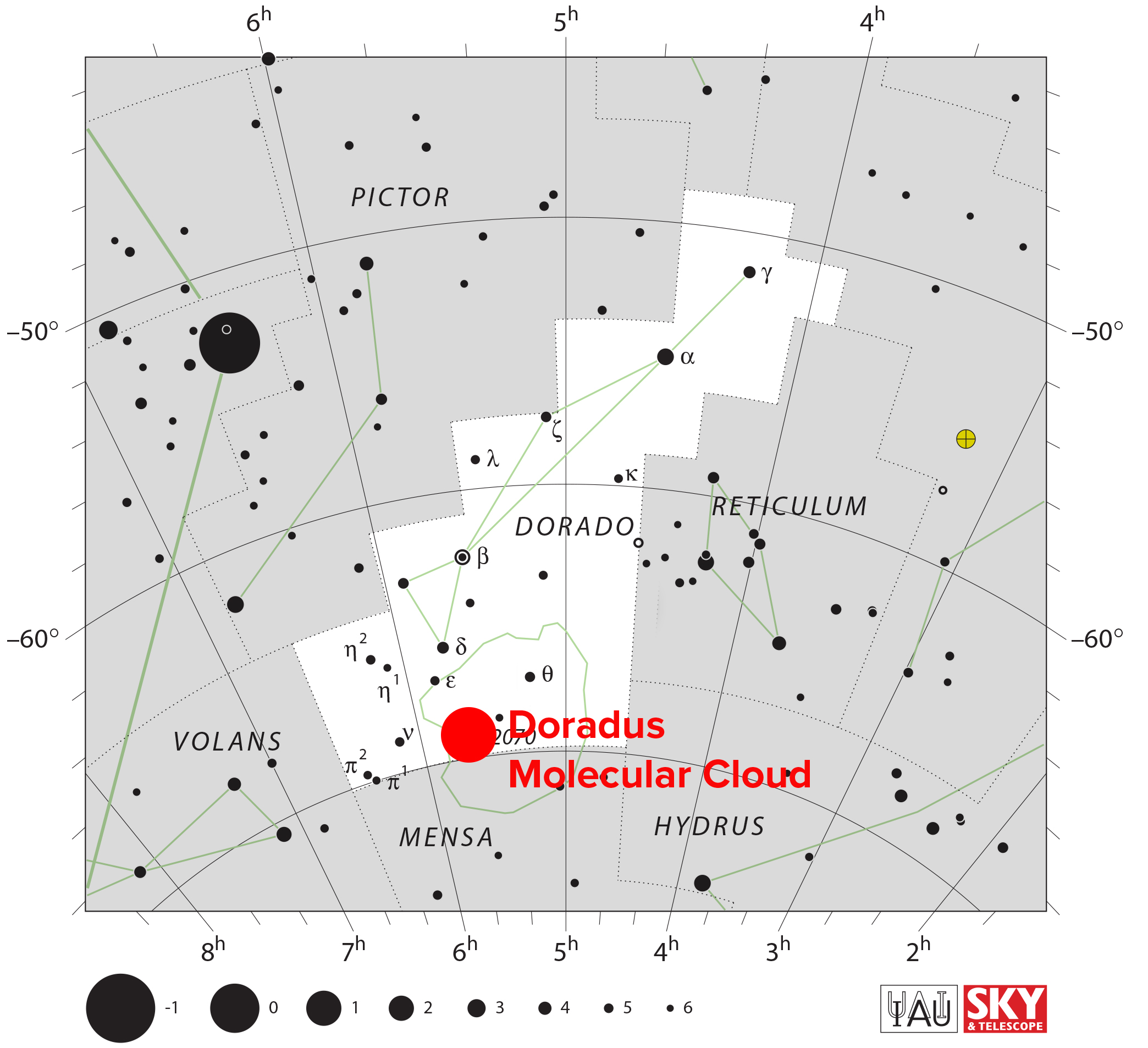