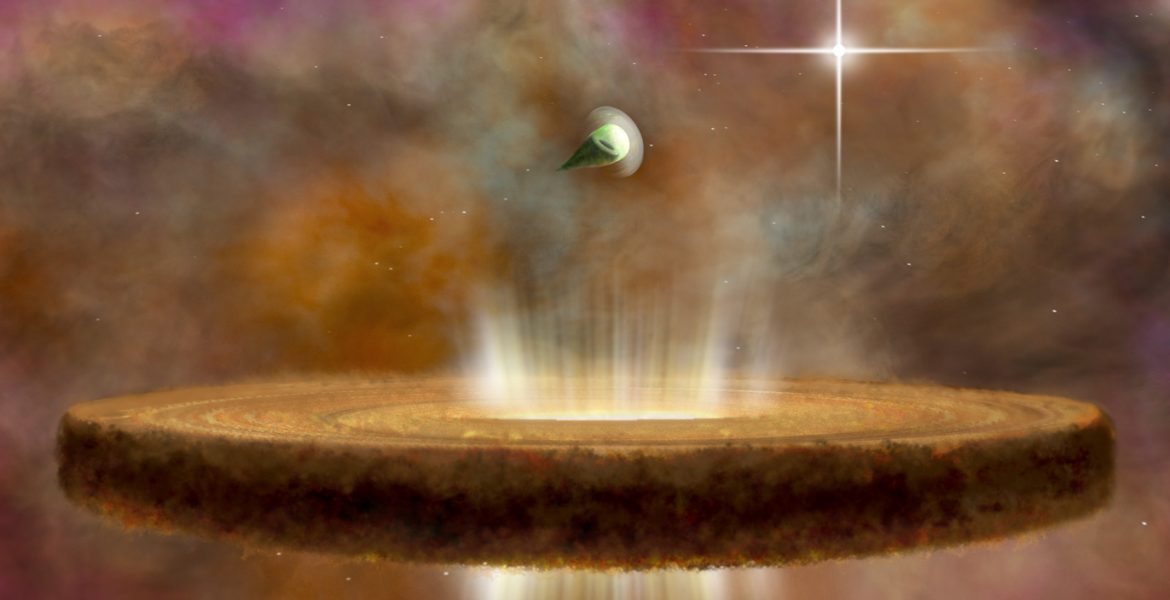 The Orion Nebula is home to hundreds of young stars and even younger protostars known as proplyds. Many of these nascent systems will go on to develop planets, while others will have their planet-forming dust and gas blasted away by the fierce ultraviolet radiation emitted by massive O-type stars that lurk nearby.

A team of astronomers from Canada and the United States has used the Atacama Large Millimeter/submillimeter Array (ALMA) to study the often deadly relationship between highly luminous O-type stars and nearby protostars in the Orion Nebula. Their data reveal that protostars within 0.1 light-years (about 600 billion miles) of an O-type star are doomed to have their cocoons of dust and gas stripped away in just a few millions years, much faster than planets are able to form.

“O-type stars, which are really monsters compared to our Sun, emit tremendous amounts of ultraviolet radiation and this can play havoc during the development of young planetary systems,” remarked Rita Mann, an astronomer with the National Research Council of Canada in Victoria, and lead author on a paper in the Astrophysical Journal. “Using ALMA, we looked at dozens of embryonic stars with planet-forming potential and, for the first time, found clear indications where protoplanetary disks simply vanished under the intense glow of a neighboring massive star.”

Many, if not all, Sun-like stars are born in crowded stellar nurseries similar to the Orion Nebula. Over the course of just a few million years, grains of dust and reservoirs of gas combine into larger, denser bodies. Left relatively undisturbed, these systems will eventually evolve into fully fledged star systems, with planets — large and small — and ultimately drift away to become part of the galactic stellar population.

Astronomers believe that massive yet short-lived stars in and around large interstellar clouds are essential for this ongoing process of star formation. At the end of their lives, massive stars explode as supernovas, seeding the surrounding area with dust and heavy elements that will get taken up in the next generation of stars. These explosions also provide the kick necessary to initiate a new round of star and planet formation. But while they still shine bright, these larger stars can be downright deadly to planets if an embryonic solar system strays too close.

“Massive stars are hot and hundreds of times more luminous than our Sun,” said James Di Francesco, also with the National Research Council of Canada. “Their energetic photons can quickly deplete a nearby protoplanetary disk by heating up its gas, breaking it up, and sweeping it away.”

Earlier observations with the Hubble Space Telescope revealed striking images of proplyds in Orion. Many had taken on tear-drop shapes, with their dust and gas trailing away from a nearby massive star. These optical images, however, couldn’t reveal anything about the amount of dust that was present or how the dust and gas concentrations changed in relation to massive stars.

The new ALMA observations detected these and other never-before-imaged proplyds, essentially doubling the number of protoplanetary disks discovered in that region. ALMA also could see past their surface appearance, peering deep inside to actually measure how much mass was in the proplyds.

Combining these studies with previous observations from the Submillimeter Array (SMA) in Hawaii, the researchers found that any protostar within the extreme-UV envelope of a massive star would have much of its disk of material destroyed in very short order. Proplyds in these close-in regions retained only a fraction (one half or less) of the mass necessary to create one Jupiter-size planet. Beyond the 0.1 light-year radius, in the far-UV dominated region, the researchers observed a wide range of disk masses containing anywhere for one to 80 times the mass of Jupiter. This is similar to the amount of dust found in low-mass star forming regions.

“Taken together, our investigations with ALMA suggest that extreme UV regions are not just inhospitable, but they’re downright hazardous for planet formation. With enough distance, however, it’s possible to find a much more congenial environment,” said Mann. “This work is really the tip of the iceberg of what will come out of ALMA; we hope to eventually learn how common solar systems like our own are.” 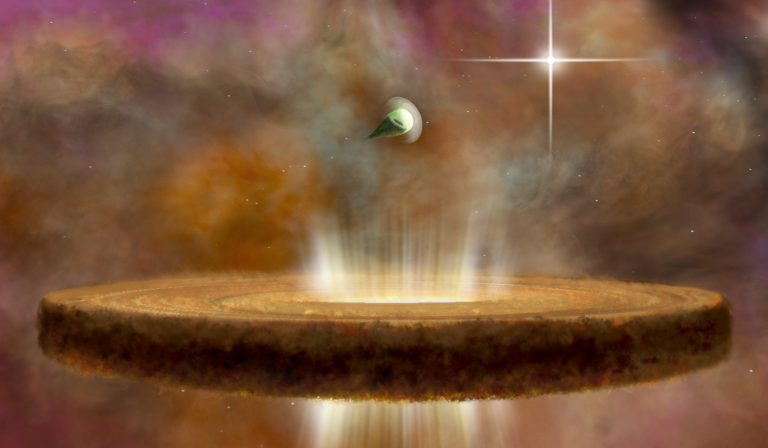 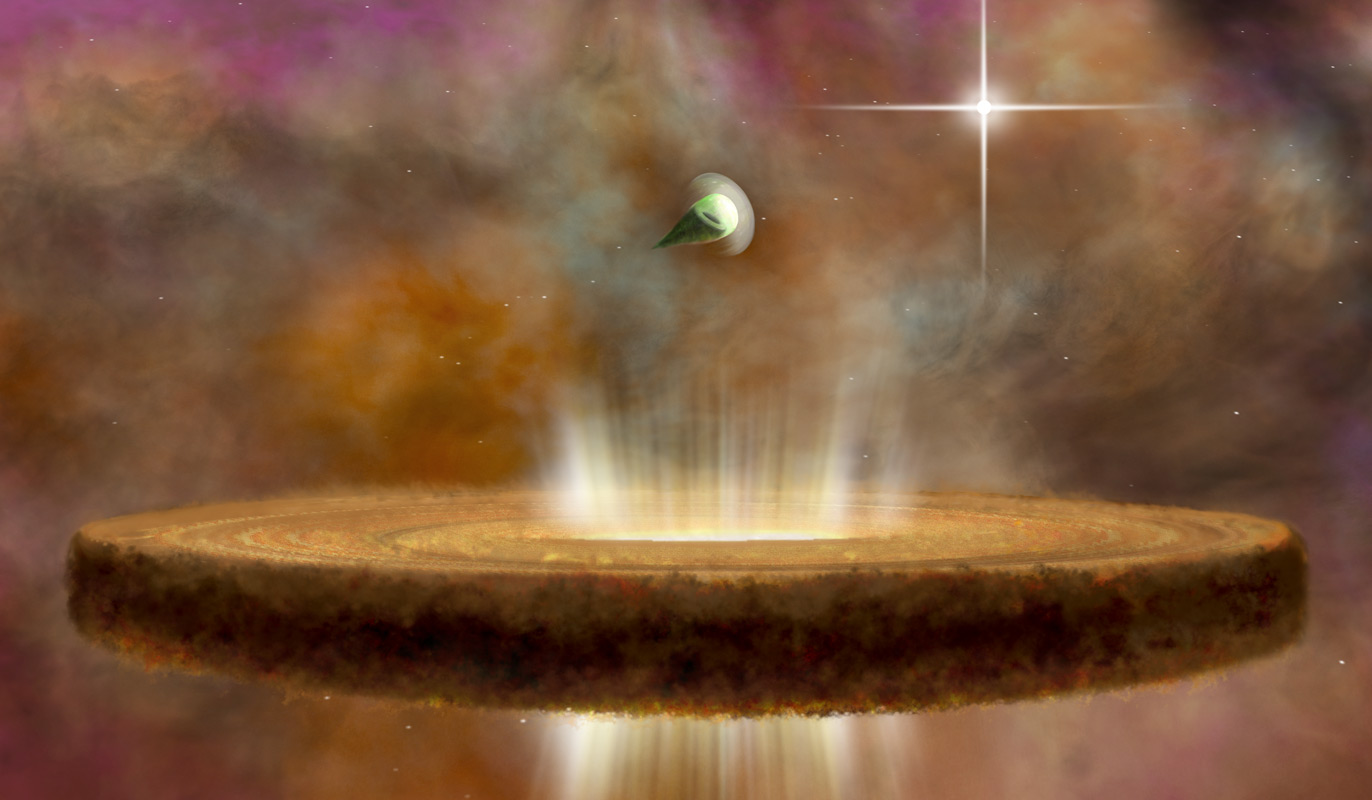