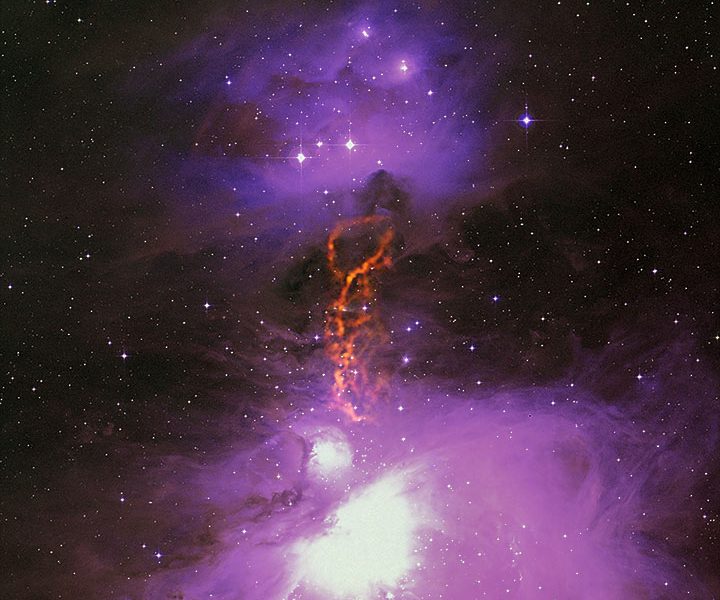 Rocky planets like Earth start out as microscopic bits of dust tinier than a grain of sand, or so theories predict.

Astronomers using the National Science Foundation’s (NSF) Green Bank Telescope (GBT) have discovered that filaments of star-forming gas near the Orion Nebula may be brimming with pebble-size particles — planetary building blocks 100 to 1,000 times larger than the dust grains typically found around protostars. If confirmed, these dense ribbons of rocky material may well represent a new, mid-size class of interstellar particles that could help jump-start planet formation.

“The large dust grains seen by the GBT would suggest that at least some protostars may arise in a more nurturing environment for planets,” said Scott Schnee, an astronomer with the National Radio Astronomy Observatory (NRAO) in Charlottesville, Virginia. “After all, if you want to build a house, it’s best to start with bricks rather than gravel, and something similar can be said for planet formation.”

The new GBT observations extend across the northern portion of the Orion Molecular Cloud Complex, a star-forming region that includes the famed Orion Nebula. The star-forming material in the section studied by the GBT, called OMC-2/3, has condensed into long, dust-rich filaments. The filaments are dotted with many dense knots known as cores. Some of the cores are just starting to coalesce while others have begun to form protostars — the first early concentrations of dust and gas along the path to star formation. Astronomers speculate that in the next 100,000 to 1 million years, this area will likely evolve into a new star cluster. The OMC-2/3 region is located approximately 1,500 light-years from Earth and is roughly 10 light-years long.

Based on earlier maps of this region made with the IRAM 30 meter radio telescope in Spain, the astronomers expected to find a certain brightness to the dust emission when they observed the filaments at slightly longer wavelengths with the GBT.

Instead, the GBT discovered that the area was shining much brighter than expected in millimeter-wavelength light.

“This means that the material in this region has different properties than would be expected for normal interstellar dust,” noted Schnee. “In particular, since the particles are more efficient than expected at emitting at millimeter wavelengths, the grains are very likely to be at least a millimeter, and possibly as large as a centimeter across, or roughly the size of a small Lego-style building block.”

Though incredibly small compared to even the most modest of asteroids, dust grains on the order of a few millimeters to a centimeter are incredibly large for such young star-forming regions. Due to the unique environment in the Orion Molecular Cloud Complex, the researchers propose two intriguing theories for their origin.

The first is that the filaments themselves helped the dust grains grow to such unusual proportions. These regions, compared to molecular clouds in general, have lower temperatures, higher densities, and lower velocities — all of which would encourage grain growth.

The second scenario is that the rocky particles originally grew inside a previous generation of cores or perhaps even protoplanetary disks. The material could then have escaped back into the surrounding molecular cloud rather than becoming part of the original newly forming star system.

“Rather than typical interstellar dust, these researchers appear to have detected vast streamers of gravel — essentially a long and winding road in space,” said NRAO astronomer Jay Lockman, who was not involved in these observations. “We’ve known about dust specks and we have known that there are things the size of asteroids and planets, but if we can confirm these results it would add a new population of rocky particles to interstellar space.”

The most recent data were taken with the Green Bank Telescope’s high frequency imaging camera, MUSTANG. These data were compared with earlier studies as well as temperature estimates obtain from observations of ammonia molecules in the clouds.

“Though our results suggest the presence of unexpectedly large dust grains, measuring the mass of dust is not a straightforward process and there could be other explanations for the bright signature we detected in the emission from the Orion Molecular Cloud,” concluded Brian Mason, an astronomer at the NRAO and co-author on the paper. “Our team continues to study this fascinating area. Since it contains one of the highest concentrations of protostars of any nearby molecular cloud it will continue to excite the curiosity of astronomers.”

A paper detailing these results is accepted for publication in the Monthly Notices of the Royal Astronomical Society.

Later this year, the GBT will receive two new, more advanced high frequency cameras: MUSTANG-1.5, the even-more-sensitive successor to MUSTANG, and ARGUS, a camera designed for mapping the distribution of organic molecules in space. 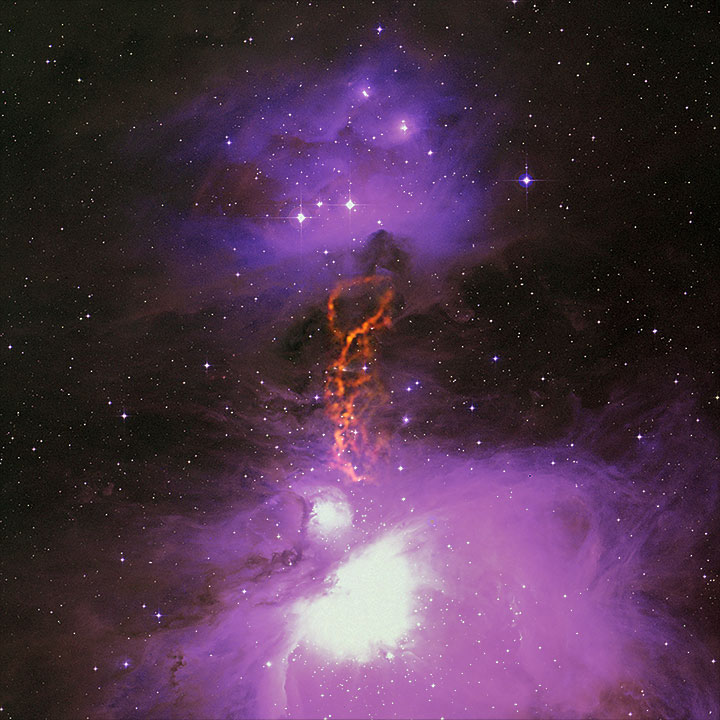 Zoom in of the OMC-2/3 region.
Credit: S. Schnee, et al.; B. Saxton, B. Kent (NRAO/AUI/NSF); We acknowledge the use of NASA's SkyView Facility located at NASA Goddard Space Flight Center.