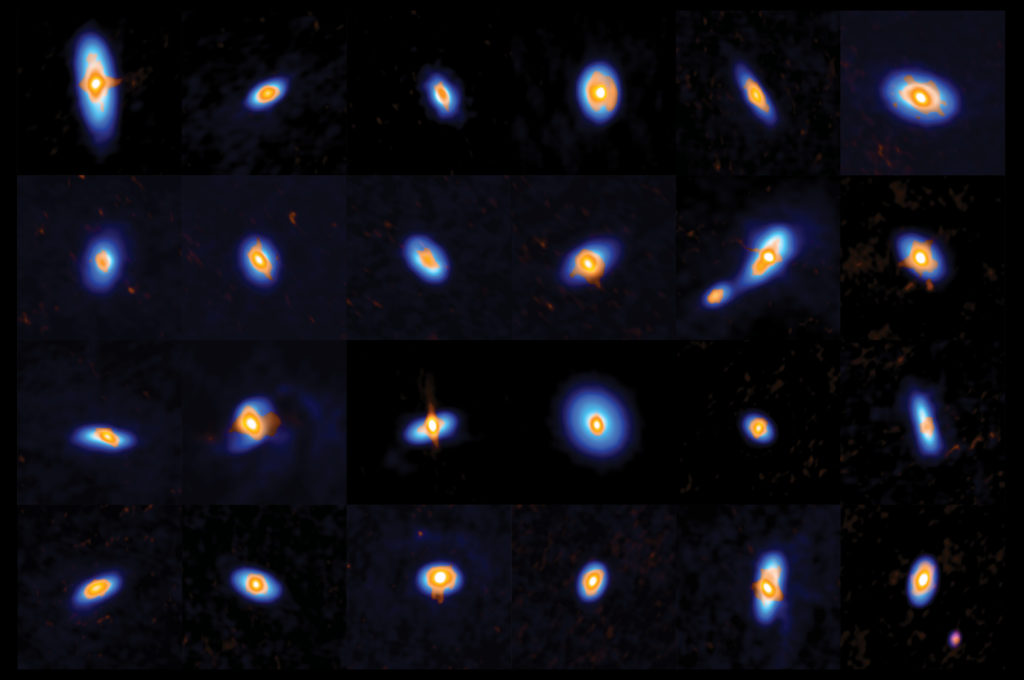 An international team of astronomers used two of the most powerful radio telescopes in the world to create more than three hundred images of planet-forming disks around very young stars in the Orion Clouds. These images reveal new details about the birthplaces of planets and the earliest stages of star formation.

Most of the stars in the universe are accompanied by planets. These planets are born in rings of dust and gas, called protoplanetary disks. Even very young stars are surrounded by these disks. Astronomers want to know exactly when these disks start to form, and what they look like. But young stars are very faint, and there are dense clouds of dust and gas surrounding them in stellar nurseries. Only highly sensitive radio telescope arrays can spot the tiny disks around these infant stars amidst the densely packed material in these clouds.

For this new research, astronomers pointed both the National Science Foundation’s Karl G. Jansky Very Large ArrayVery Large ArrayThe Very Large Array is a customizable interferometer that varies between 2/3 of a mile to 22 miles long depending on the time of year. It is considered to be one of the most advanced radio telescope arrays on Earth with 28 antennas in Socorro, New Mexico. (VLA) and the Atacama Large Millimeter/submillimeter Array (ALMA)Atacama Large Millimeter/submillimeter Array (ALMA)Funded by the U.S. National Science Foundation and its international partners (NRAO/ESO/NAOJ), ALMA is among the most complex and powerful astronomical observatories on Earth or in space. The telescope is an array of 66 high-precision dish antennas in northern Chile. to a region in space where many stars are born: the Orion Molecular Clouds. This survey, called VLA/ALMA Nascent Disk and Multiplicity (VANDAM), is the largest survey of young stars and their disks to date.

Very young stars, also called protostars, form in clouds of gas and dust in space. The first step in the formation of a star is when these dense clouds collapse due to gravity. As the cloud collapses, it begins to spin – forming a flattened disk around the protostar. Material from the disk continues to feed the star and make it grow. Eventually, the left-over material in the disk is expected to form planets.

Many aspects about these first stages of star formation, and how the disk forms, are still unclear. But this new survey provides some missing clues as the VLA and ALMA peered through the dense clouds and observed hundreds of protostars and their disks in various stages of their formation.

Young planet-forming disks
“This survey revealed the average mass and size of these very young protoplanetary disks,” said John Tobin of the National Radio Astronomy Observatory (NRAO) in Charlottesville, Virginia, and leader of the survey team. “We can now compare them to older disks that have been studied intensively with ALMA as well.”

What Tobin and his team found, is that very young disks can be similar in size, but are on average much more massive than older disks. “When a star grows, it eats away more and more material from the disk. This means that younger disks have a lot more raw material from which planets could form. Possibly bigger planets already start to form around very young stars.”

Four special protostars
Among hundreds of survey images, four protostars looked different than the rest and caught the scientists’ attention. “These newborn stars looked very irregular and blobby,” said team member Nicole Karnath of the University of Toledo, Ohio (now at SOFIA Science Center). “We think that they are in one of the earliest stages of star formation and some may not even have formed into protostars yet.”

It is special that the scientists found four of these objects. “We rarely find more than one such irregular object in one observation,” added Karnath, who used these four infant stars to propose a schematic pathway for the earliest stages of star formation. “We are not entirely sure how old they are, but they are probably younger than ten thousand years.”

To be defined as a typical (class 0) protostar, stars should not only have a flattened rotating disk surrounding them, but also an outflow – spewing away material in opposite directions – that clears the dense cloud surrounding the stars and makes them optically visible. This outflow is important, because it prevents stars from spinning out of control while they grow. But when exactly these outflows start to happen, is an open question in astronomy.

One of the infant stars in this study, called HOPS 404, has an outflow of only two kilometers (1.2 miles) per second (a typical protostar-outflow of 10-100 km/s or 6-62 miles/s). “It is a big puffy sun that is still gathering a lot of mass, but just started its outflow to lose angular momentum to be able to keep growing,” explained Karnath. “This is one of the smallest outflows that we have seen and it supports our theory of what the first step in forming a protostar looks like.”

Combining ALMA and VLA
The exquisite resolutionResolutionThe ability of a telescope to show detail. One common way to describe the resolution of a telescope is to state the minimum angular separation at which a double star can be distinguished as two separate stars. (see double star for more) and sensitivitySensitivityThe sensitivity of a telescope is the smallest signal that it can clearly measure from a source in space. It is the minimum brightness that a telescope can detect. A telescope with high sensitivity can detect very dim objects, whereas a low sensitivity telescope can only detect the brighter objects in space. provided by both ALMA and the VLA were crucial to understand both the outer and inner regions of protostars and their disks in this survey. While ALMA can examine the dense dusty material around protostars in great detail, the images from the VLA made at longer wavelengths were essential to understand the inner structures of the youngest protostars at scales smaller than our solar system.

“The combined use of ALMA and the VLA has given us the best of both worlds,” said Tobin. “Thanks to these telescopes, we start to understand how planet formation begins.”

This research was presented in two papers: 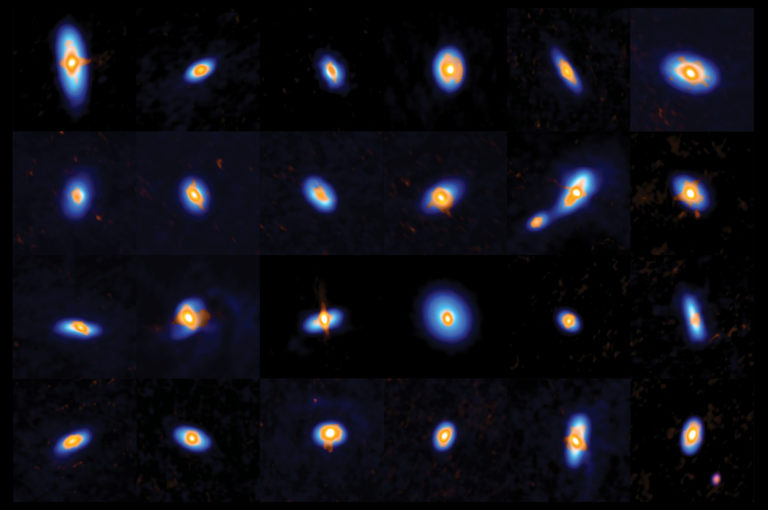 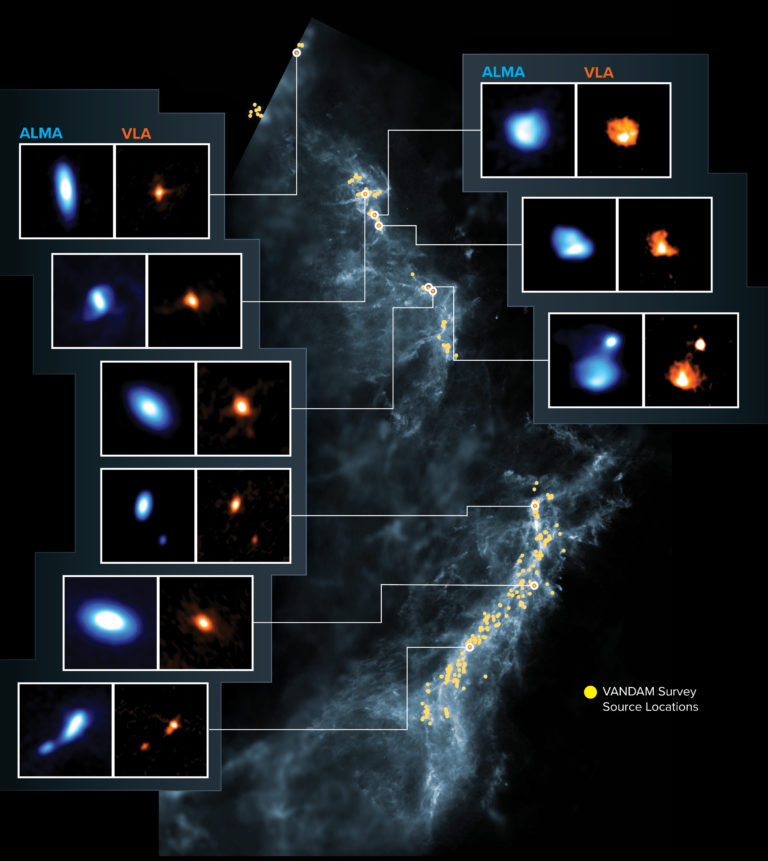 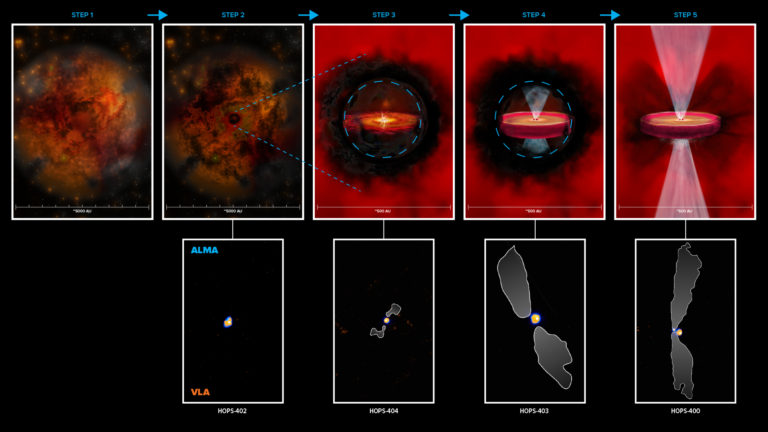 Schematic showing the formation of protostars 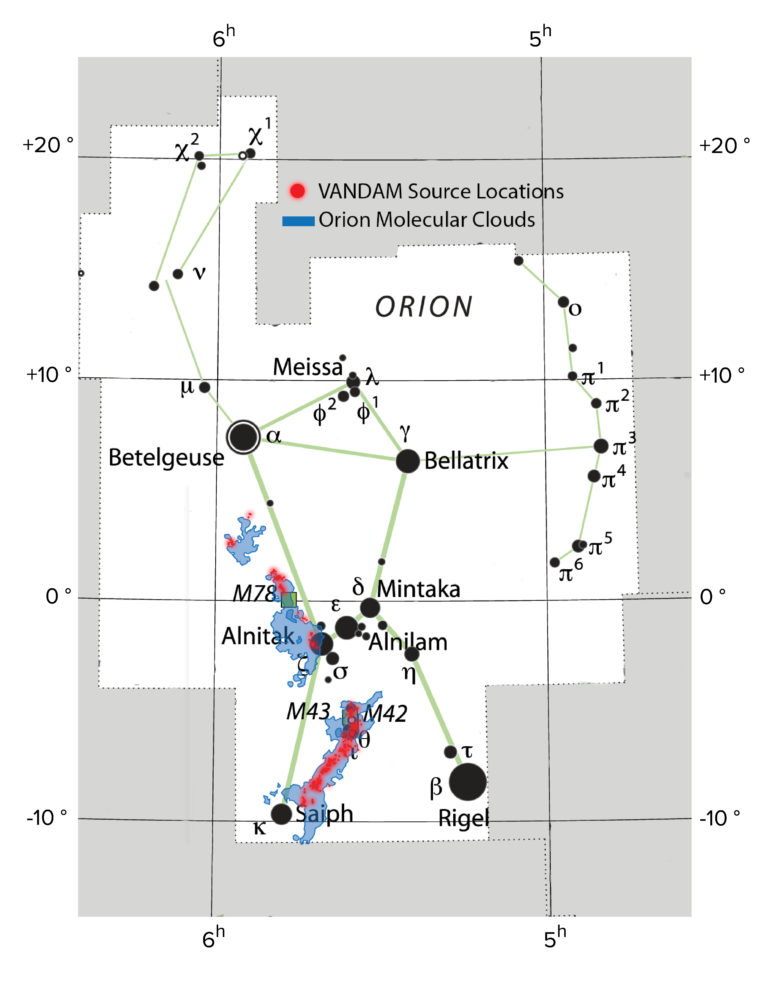 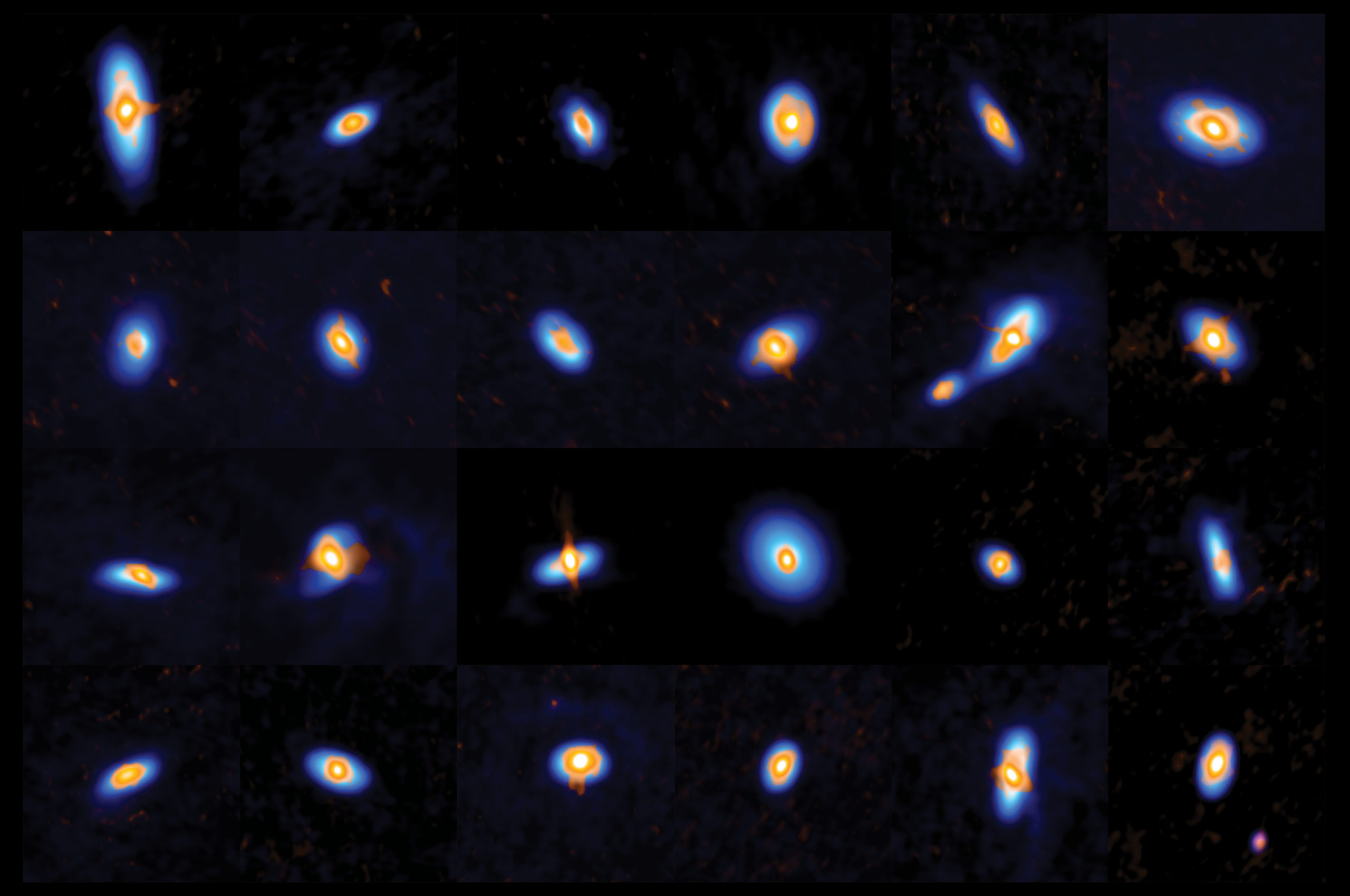 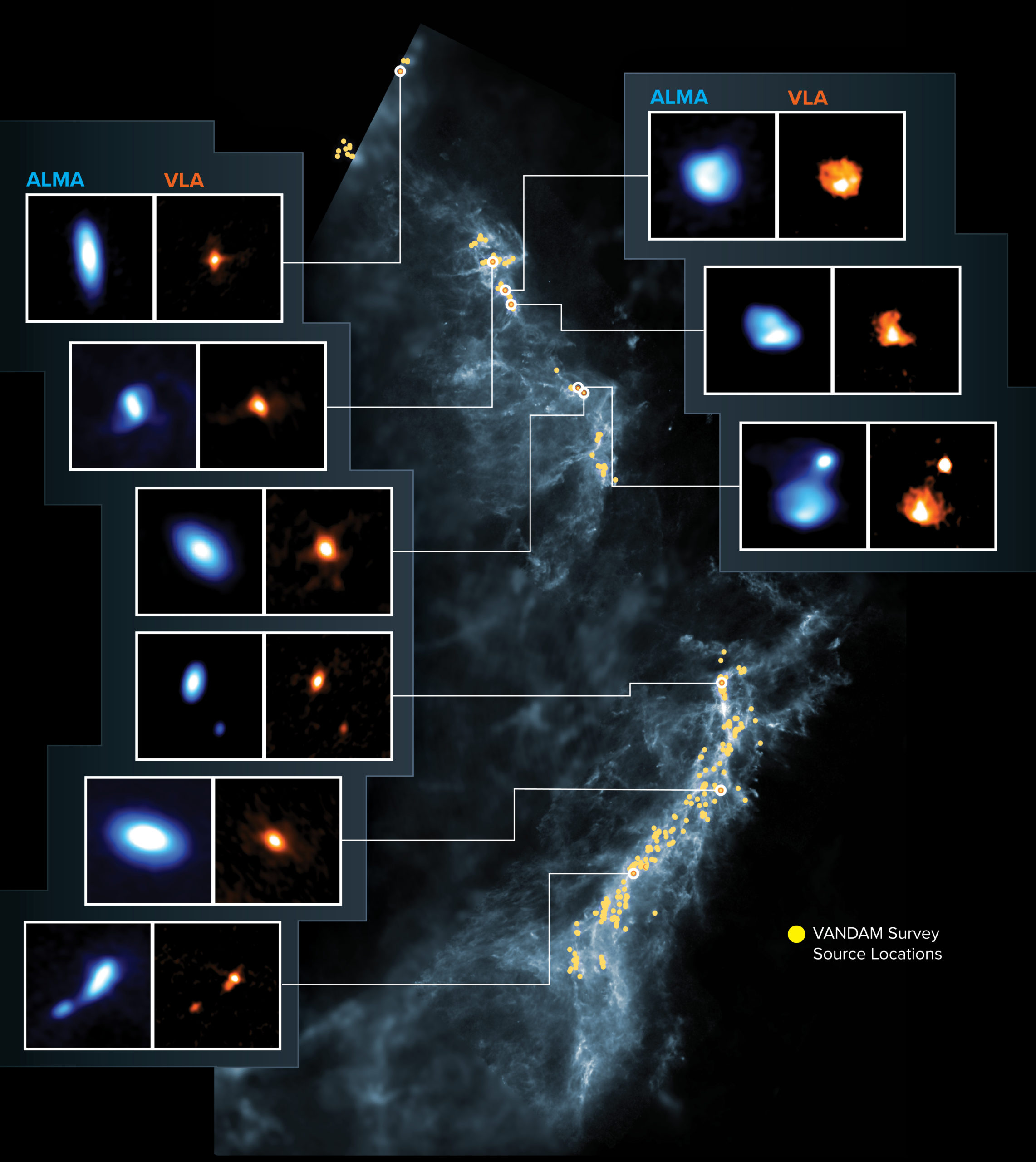 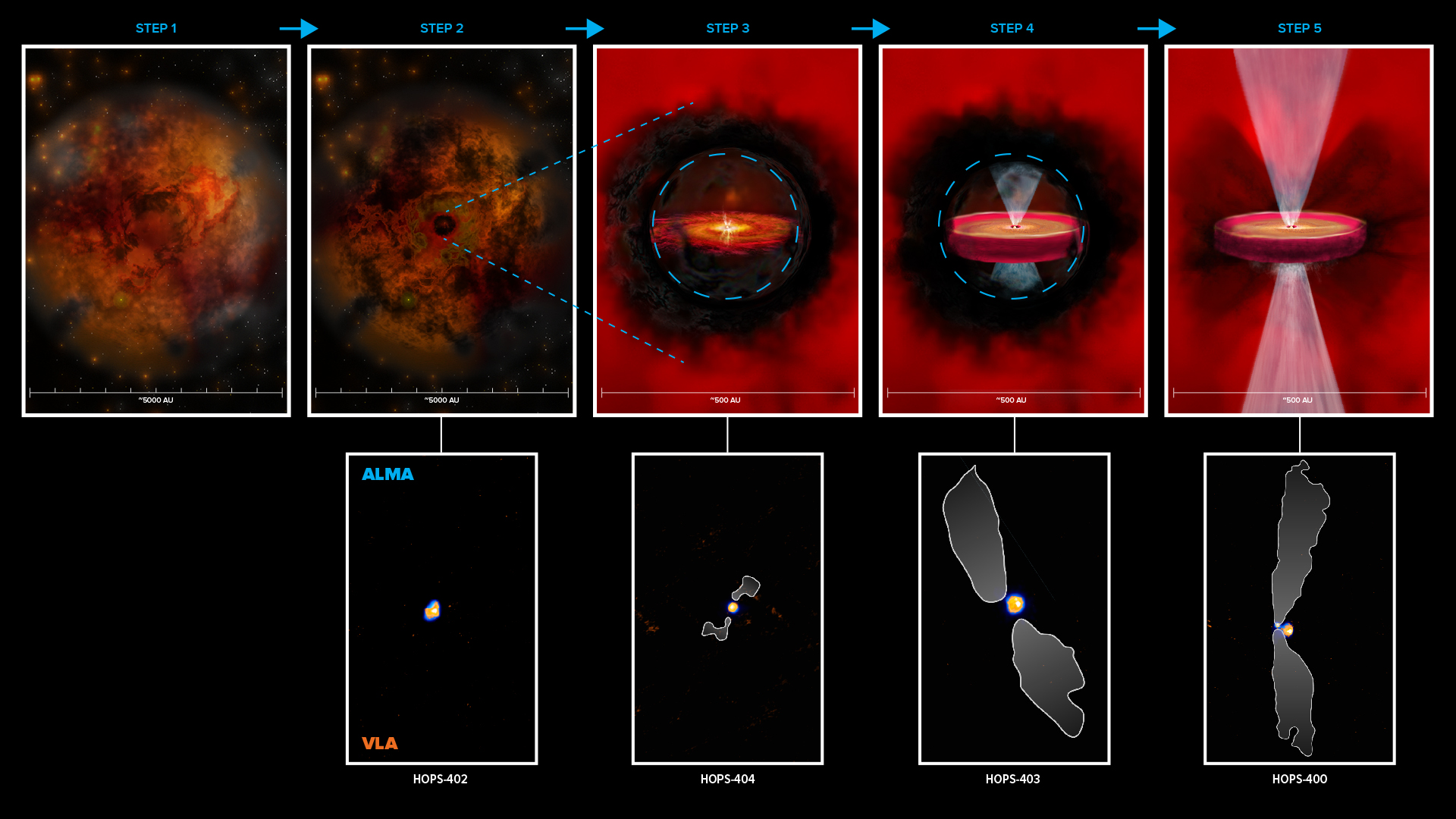 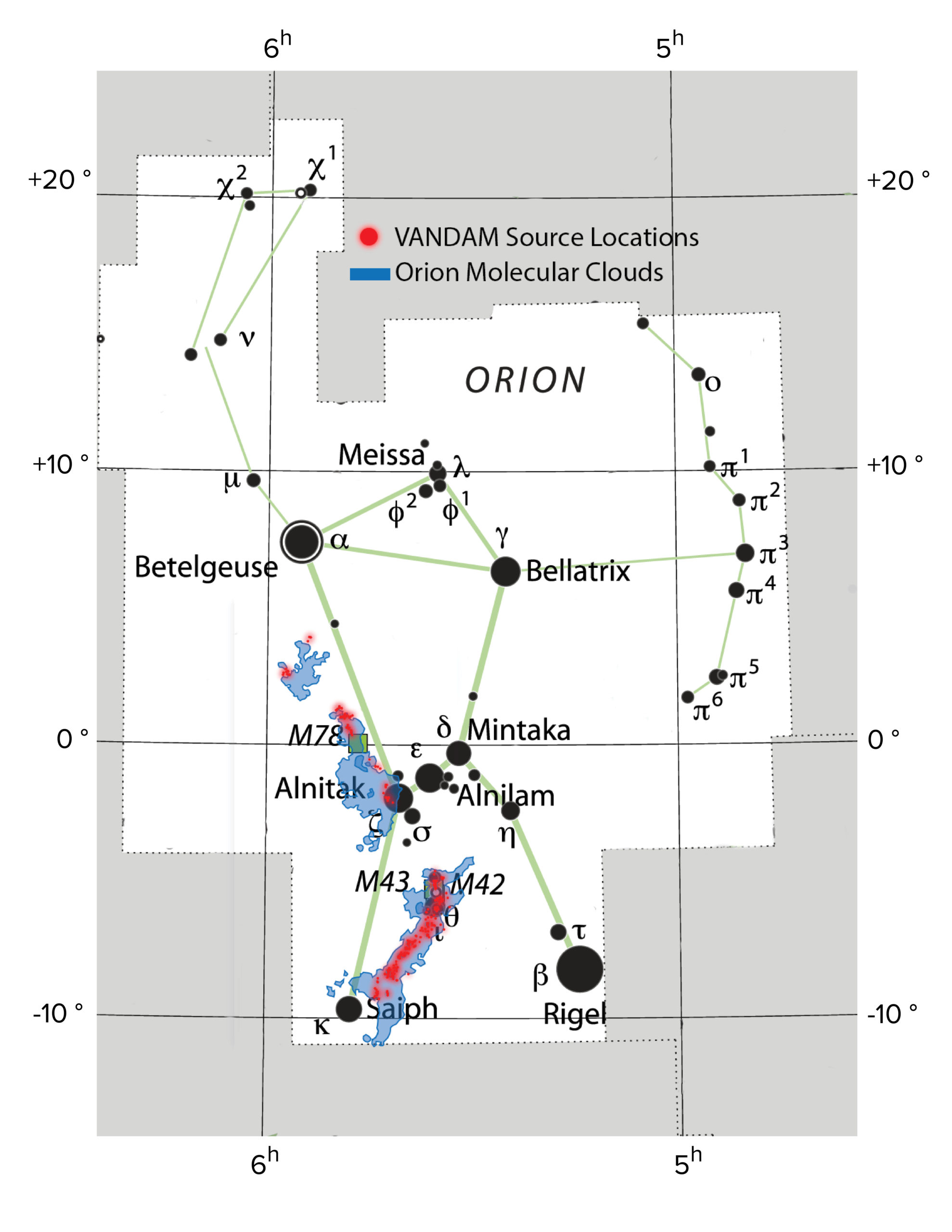