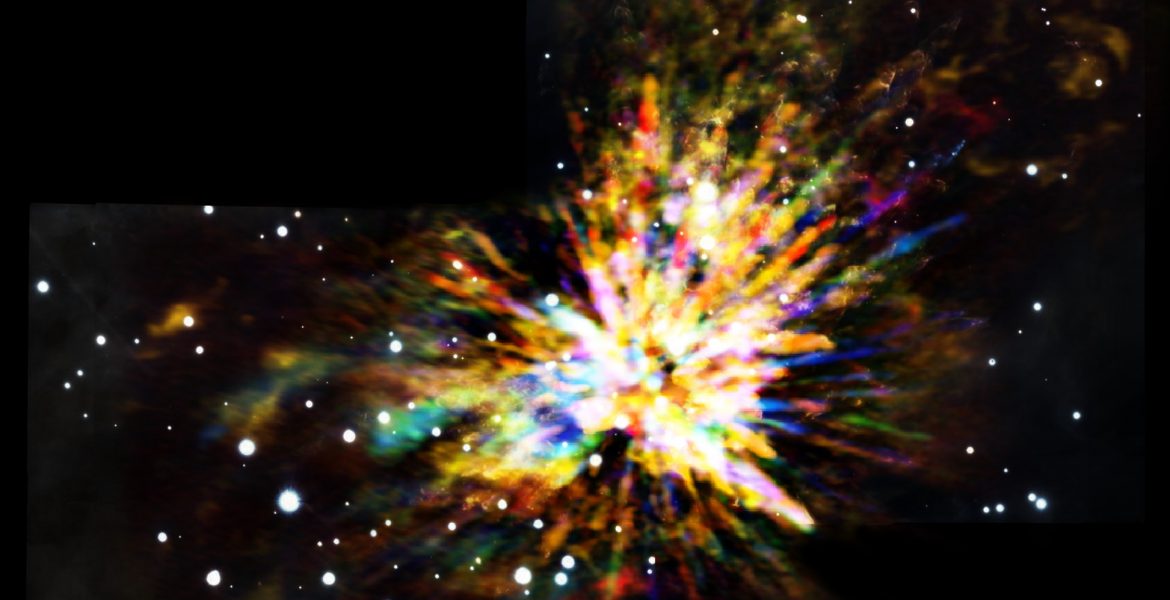 Star birth can be a violent and explosive event, as dramatically illustrated in new ALMA images.

A pair of adolescent protostars had a perilously close encounter that blasted their stellar nursery apart.

Shortly after starting to form some 100,000 years ago, several protostars in the Orion Molecular Cloud 1 (OMC-1), a dense and active star factory about 1,500 light-years from Earth just behind the Orion Nebula, latched onto each other gravitationally and gradually drew closer.

Eventually, two of these stars either grazed each other or collided, triggering a powerful eruption that launched other nearby protostars and hundreds of giant streamers of dust and gas into interstellar space at speeds greater than 150 kilometers per second. This cataclysmic interaction released as much energy as our Sun emits over the course of 10 million years.

Fast forward 500 years, and the remains of this spectacular explosion created the spectacular image we see with ALMA.

“What we see in this once calm stellar nursery is a cosmic version of a 4th of July fireworks display, with giant streamers rocketing off in all directions,” said John Bally with the University of Colorado and lead author on a paper published in the Astrophysical Journal.

Groups of stars such as those in OMC-1 are born when a cloud of gas hundreds of times more massive than our Sun begins to collapse under its own gravity. In the densest regions, protostars form and begin to drift about randomly. Over time, this random motion can dampen, which allows some of the stars to fall toward a common center of gravity, usually dominated by a particularly large protostar.

If these stars draw too close to each other before they drift away into the galaxy, violent interactions can occur.

According to the researchers, such explosions are expected to be relatively short lived, with the remnants like those seen by ALMA lasting only centuries.

“Though fleeting, protostellar explosions may be relatively common,” said Bally. “By destroying their parent cloud, as we see in OMC-1, such explosions may also help to regulate the pace of star formation in these giant molecular clouds.”

Bally and his team observed this feature previously with the Gemini-South telescope in Chile. These earlier images, taken in the near infrared, reveal the remarkable structure of the streamers, which extend nearly a light-year from end to end.

Hints of the explosive nature of this outflow were first uncovered in 2009 with the Submillimeter Array in Hawaii. The new ALMA data, however, provide much greater clarity, unveiling important details about the distribution and high-velocity motion of the carbon monoxide (CO) gas inside the streamers. This helps astronomers understand the underlying force of the blast and the impact such events could have on star formation across the galaxy.

“People most often associate stellar explosions with ancient stars, like a nova eruption on the surface of a decaying star or the even more spectacular supernova death of an extremely massive star,” Bally says. “ALMA has given us new insights into explosions on the other end of the stellar life cycle, star birth.”

* The text of this release was modified to address some confusion on timing between the event and its observation from Earth. 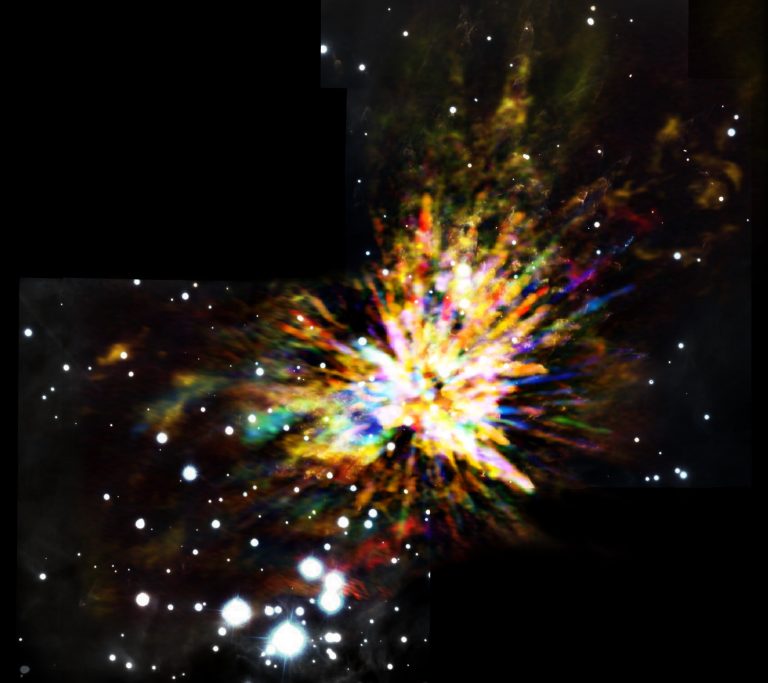 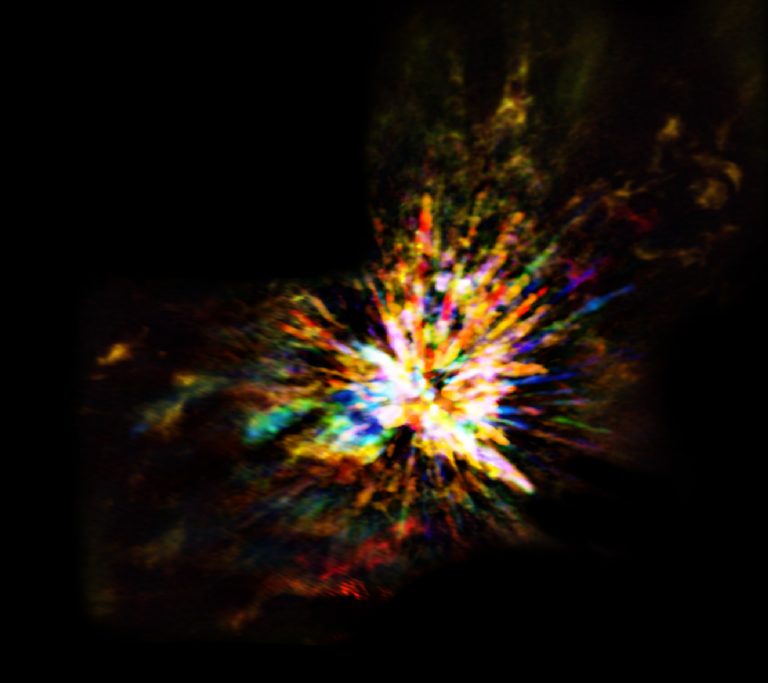 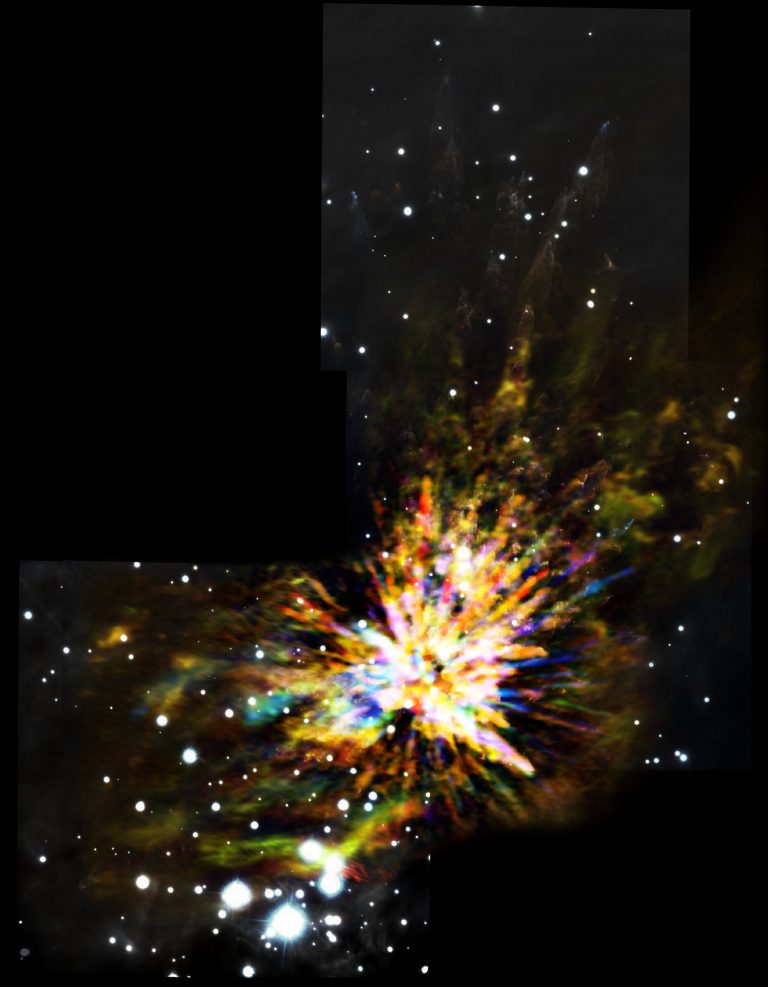 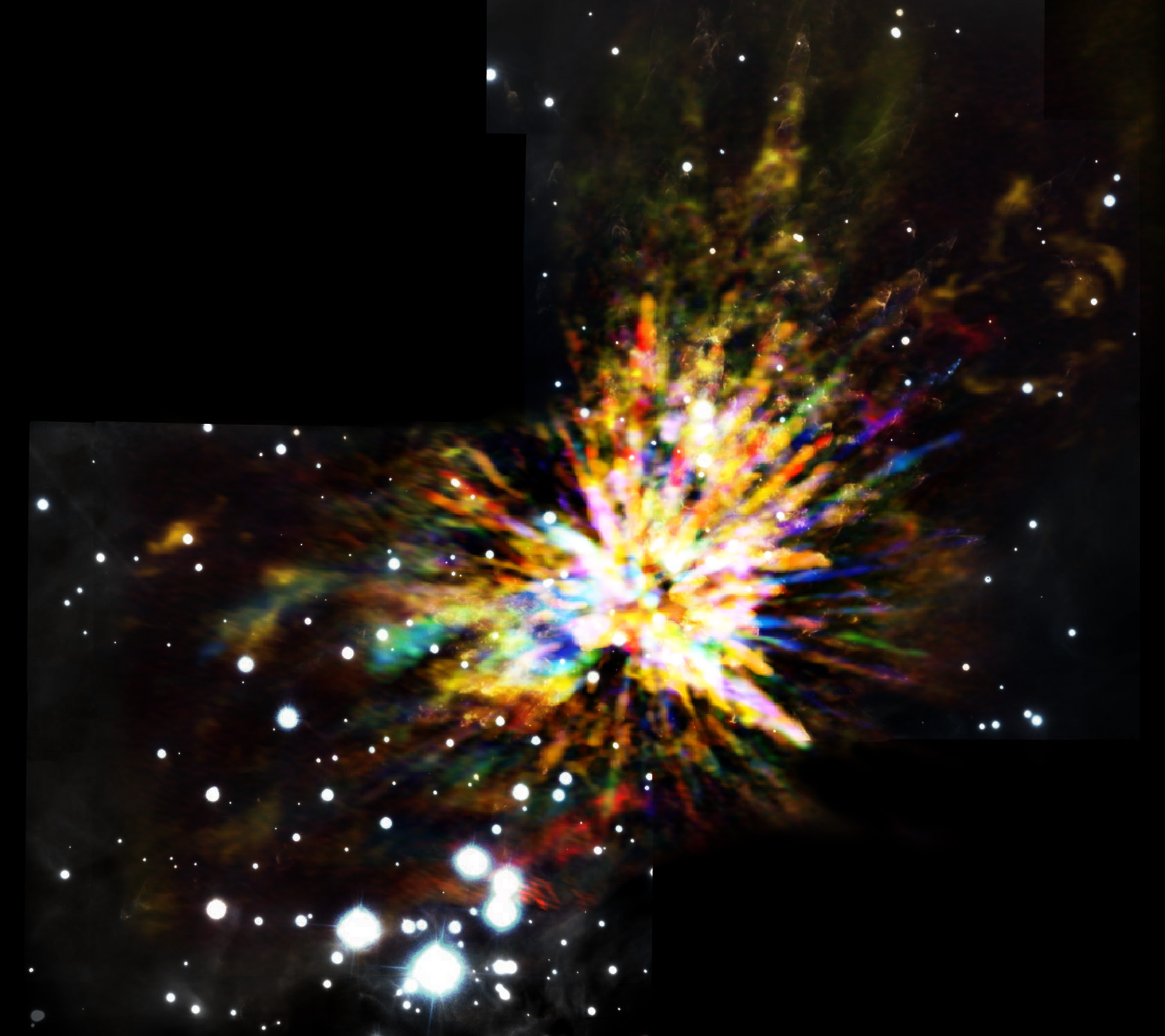 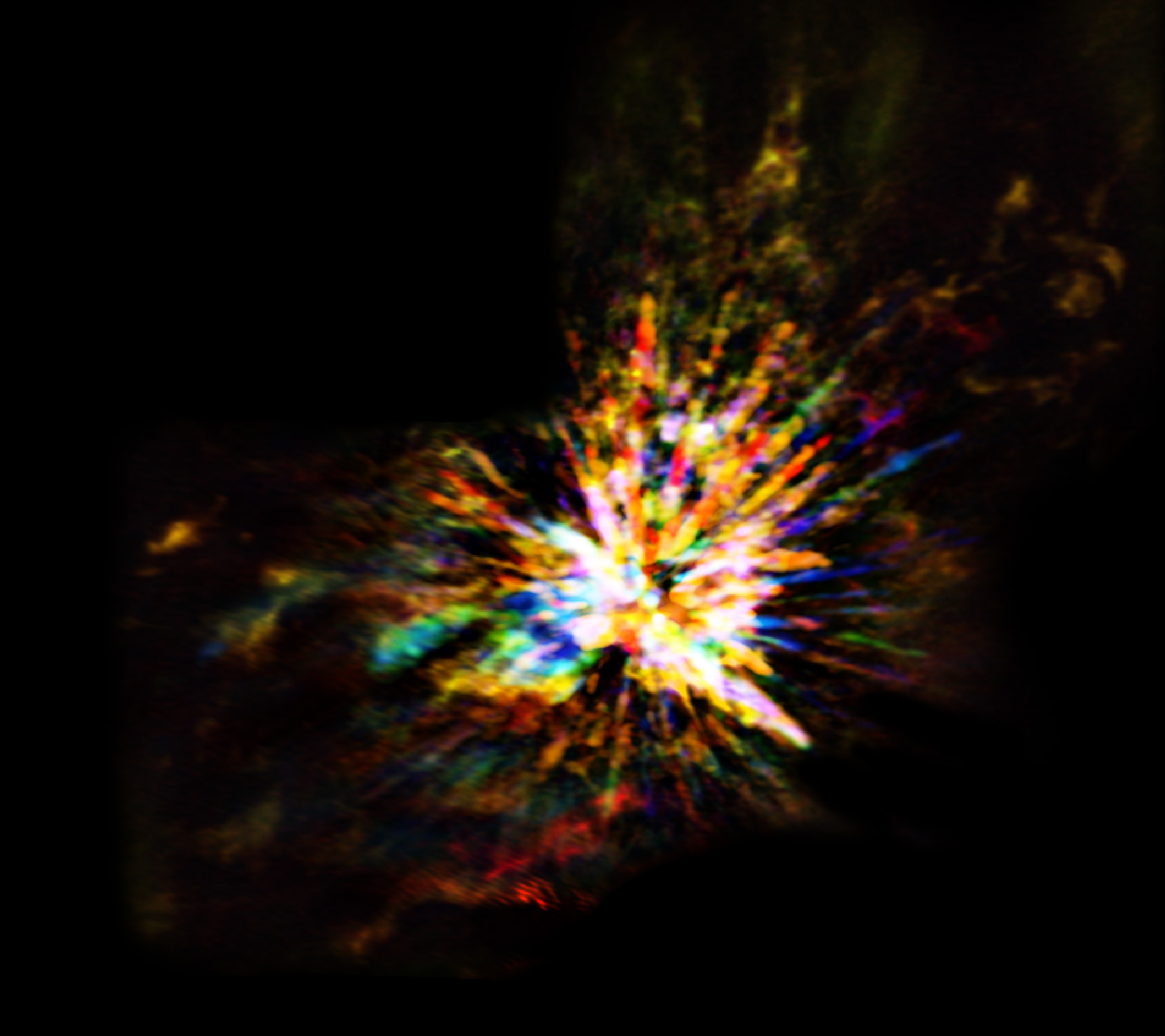 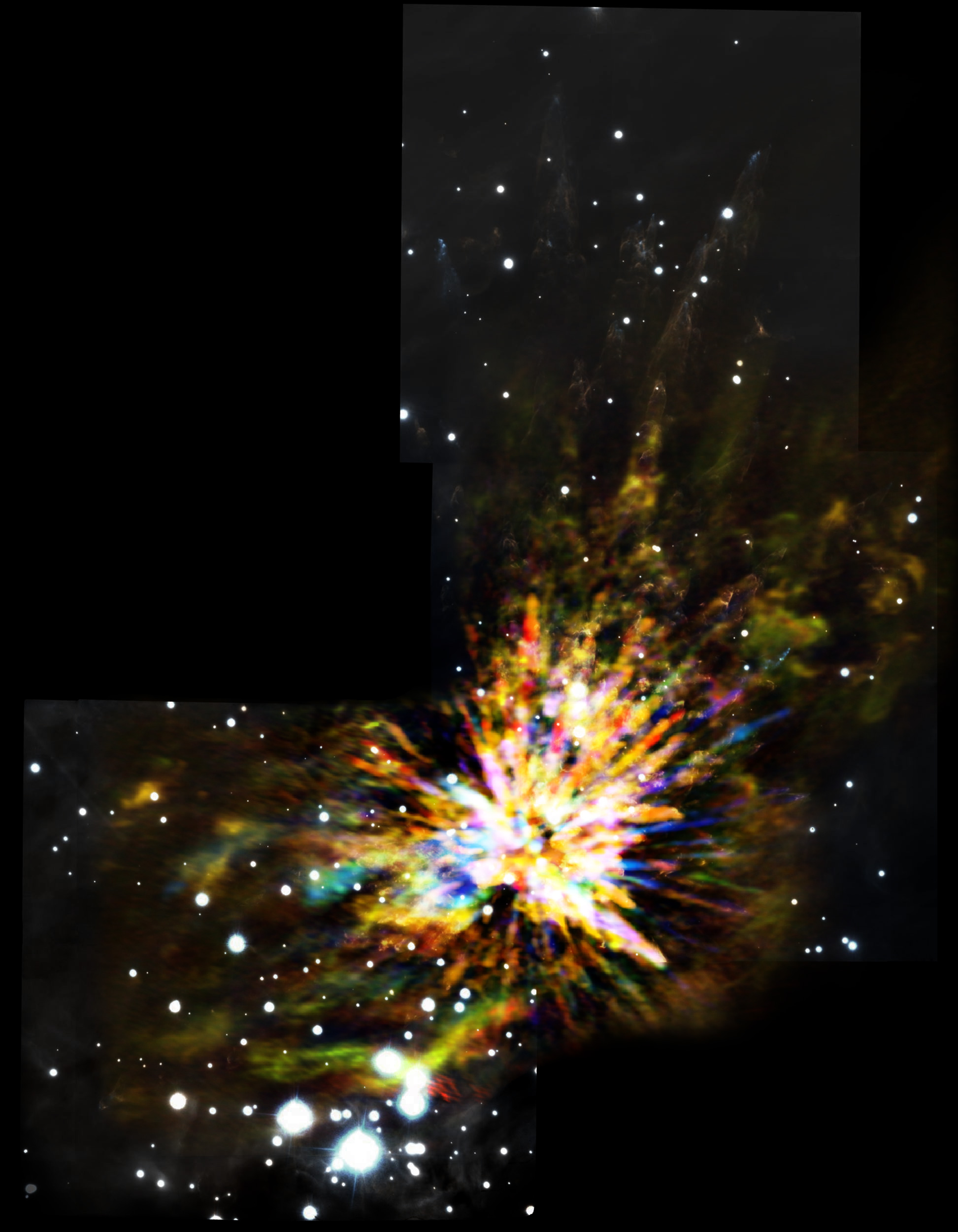