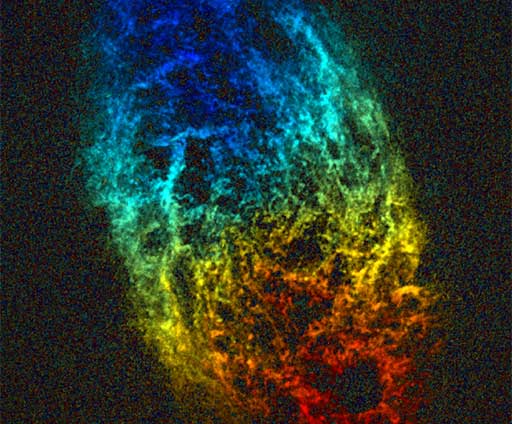 Radio astronomers view the universe in several ranges of wavelengthsWavelengthThe distance between two adjacent crests of a wave. we call bands. The Very Large Array (VLA) uses wavelengths ranging from 4 meters to less than a centimeter. The Atacama Large Millimeter/submillimeter Array (ALMA) uses radio bands ranging from a couple of centimeters to a third of a millimeter. But why do radio telescopes use such a wide range of wavelengths? The answer lies in the many ways that objects emit radio light, and how this light interacts with the gas and dust of interstellar space.

Long radio wavelengths, such as those seen by the VLA’s Band 4, are typically produced by ionized gas. It lets us see where hot plasma is located in our galaxy. These long wavelengths are also useful because most neutral gas is transparent at these wavelengths. This means very little of this light is absorbed as it travels through space. Shorter wavelengths of light are often emitted by particular atoms or molecules. One of the most important of these is the 21-centimeter line, which is emitted by neutral hydrogen. This wavelength is one of the best ways to observe the distribution of matter in a galaxy since hydrogen is by far the most abundant element in the universe.

Wavelengths in the 10-cm to 20-cm range are particularly good for radio sky surveys, such as the VLA Sky Survey (VLASS). Radio galaxies are particularly bright in this range as are the jets emitted by supermassive black holesBlack HoleAn object – typically a collapsed star – whose gravity is so strong that its escape velocity exceeds the speed of light.. By scanning the sky at these wavelengths, VLASS has captured images of nearly 10 million radio sources.

Light with wavelengths of a centimeter or two is often emitted through a process known as synchrotron radiationSynchrotron RadiationRadiation emitted by charged particles being accelerated in magnetic fields and moving at near the speed of light.. When electrons speed through a strong magnetic field, the magnetic field forces them to move in tight spirals along the magnetic field lines. Because of this, they emit radio light. Synchrotron radiation is particularly useful at mapping the magnetic fields near black holes. Another process that emits light in this range is known as a maserMaserAn acronym which stands for “Microwave-amplified stimulated emission of radiation.” A maser can be used as an amplifier of radio waves (similar to a laser, which amplifies visible light). This can be a naturally occurring feature or created using special properties of certain crystals, like rubies, at temperatures near absolute zero and in strong magnetic fields. Water molecules in space can form masers that help astronomers study radio emission from objects that would normally be too faint to detect. or microwave laser. We’re most familiar with simple laser pointers that emit coherent red light, but in interstellar space pockets of water can emit coherent light with a wavelength of 1.3 centimeters. Since these water masers emit a very specific wavelength of light, they can be used to measure the rate at which the universe expands.

Radio wavelengths on the order of a millimeter are particularly useful for studying cold gas and dust. Dust grains in interstellar space emit light with wavelengths on the order of their size, and since much of this dust is about a millimeter in size, that’s the wavelength where they emit the most light. These short wavelengths can be difficult to observe, in part because our atmosphere absorbs much of the light at these wavelengths. But they are also vitally important for the study of young planetary systems. ALMA has been able to capture disks of gas and dust around young stars and has even seen how gaps form within these disks as young planets begin to form. It is revolutionizing our understanding of how exoplanets form.

But perhaps one of the more interesting radio bands is ALMA’s Band 6, which captures light with wavelengths from 1.1 – 1.4 mm. It has been used to study how red giant stars generate heat, and the distribution of molecules in planetary nebulae. But it was also used to create one of the most powerful radio images of recent years, that of the supermassive black hole in the heart of galaxy M87. Band 6 receivers were used on radio telescopes across the world as part of the Event Horizon Telescope (EHT), and the data they gathered was combined to create the first direct image of a black hole.