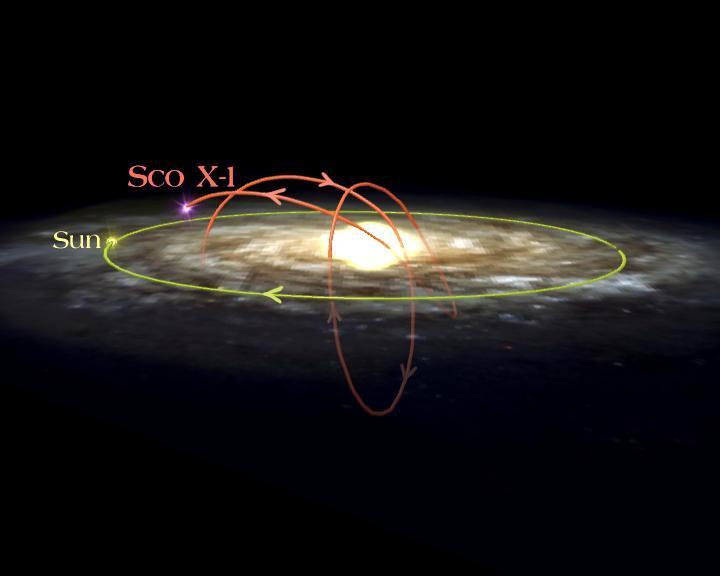 The discovery of “microquasars” within our own Milky Way Galaxy has won two astronomers a prize from the High Energy Astrophysics Division of the American Astronomical Society. Felix Mirabel of the Center for Studies at Saclay, France, and Luis Rodriguez of the Institute of Astronomy at the National Autonomous University in Mexico City, were awarded the Bruno Rossi Prize at the American Astronomical Society meeting in Toronto, Ontario, today.

The two researchers, who have collaborated for more than 15 years, used an orbiting X-Ray observatory and the National Science Foundation’s Very Large Array (VLA) radio telescope to discover the extremely energetic microquasars. Microquasars are thought to be binary-star systems with one of the stars either a superdense neutron star or a black hole. They emit X-rays and eject jets of subatomic particles at speeds approaching that of light.

Though the neutron stars or black holes in microquasars are only a few times the mass of the sun, the phenomena associated with them, such as the jets, are similar to those seen in active galaxies and quasars, believed to be powered by the gravitational energy of black holes with millions of times the mass of the sun. As such, the microquasars provide much closer “laboratories” for study of these phenomena, which remain poorly understood.

The Rossi Prize is awarded for “a significant contribution to high energy astrophysics, with particular emphasis on recent work,” according to the High Energy Astrophysics Division.

Mirabel and Rodriguez began the research that led to the microquasar discoveries in 1990. Using the French-Russian SIGMA- GRANAT X-Ray satellite, they discovered a microquasar near the Milky Way’s center in 1992. With the VLA, they found radio emission from this object.

In 1992, using the same satellite, they discovered a similar object, called GRS 1915+105. In 1994, that object experienced an outburst that made it bright enough at radio wavelengths to observe with the VLA. Observing it at frequent intervals with the VLA, the researchers discovered that “blobs” in its radio jets were traveling at speeds apparently greater than that of light. Correcting for relativistic effects, they calculated that the material in the jets was actually moving at 92 percent of light speed. This was the first object found in our own Galaxy that displayed such apparent “superluminal” speed. A time series of radio images showing the motion of the blobs appeared on the cover of the scientific journal Nature for September 1, 1994.

At the time, Mirabel and Rodriguez’ work on GRS 1915+105 was called “one of the most valuable results of more than a decade and a half of observations at the VLA,” by Miller Goss, assistant director of the National Radio Astronomy Observatory for VLA/VLBA observations.

Another microquasar discovered in 1994 also showed apparent superluminal motion. Since these discoveries, the microquasars have been the targets of intense observational programs, as researchers seek to learn just how the gravitation of superdense objects can power the generation of relativistic jets and other energetic phenomena.

The VLA is one of the instruments of the National Radio Astronomy Observatory, a facility of the National Science Foundation operated under cooperative agreement by Associated Universities, Inc.